Bored of the same old options of shrimps or Badis for your nano set-up? Fear not, here’s a catfish that won’t take up much space while totally filling your heart.

About ten years ago, my partner yelled at me to come look at something on the television. What I saw there was myself — a tall, thin man with my face, bleached hair to the shoulders, thick-rimmed glasses, Nike trainers, the same wonky teeth, wearing an obscure 80s camouflage jacket only available from Russia. I was gobsmacked; it was me, but it wasn’t me. Somehow this man in the south of England had the exact same ‘adaptations’ to the world as I did.

I’d imagine that dwarf talking catfish, Physopyxis lyra, would feel something similar if I stuck them down next to Hara jerdoni or Erethistes pusillus (read Steve Grant’s take on these amazing fish in the following feature). These catfish live continents apart, but because of their choice of habitat, they have adopted the same costumes as each other, and similar tastes.

Physopyxis are without doubt some of the cutest little catfish you’ll lay eyes upon, and the perfect biotope project for an aquarist with limited space. They are doradid catfish, that large, robust family of jagged cats we know as the talking or thorny catfish. The first of those names is a reference to their auditory antics
— by abrading the bones of their pectoral girdles or by ‘drumming’ their swimbladders with bones, they can create a range of grunts, croaks, squawks, toots, chirps and farts.

The second name comes from the sharp, sawlike scutes that run down their flanks. As any aquarist who has handled these fish before will testify, when they trap your fingers between their fins and those sharp sides, it’s a memory forming experience.

There are three species in the Physopyxis genus: P. ananas, P. cristata and P. lyra. And here’s the best thing about them — the largest of the three, P. lyra, barely reaches over 3cm fully grown, with the other two hitting a meagre 2.2cm. Tiny fish like that mean that we can get away with tiny biotopes, and you can set something up that’s just 30cm long. 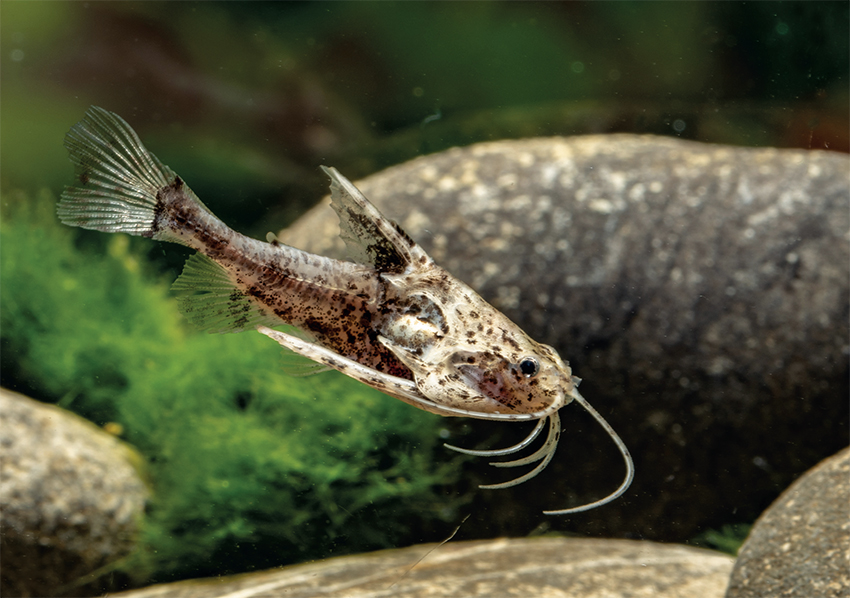 Setting up a home for them is so easy that I advise everyone try it at least once. You’re aiming to recreate the natural habitat, assuming you ever want to see them out and about,
and so the order of the day is debris — lots and lots of debris. My advice would be to spend some time browsing blackwateruk.com and working out just how much you can afford in the way of leaf litter, seed pods, twigs and branches.

The next thing you want is floating plants, and the types with long, dense root structures. Water hyacinths would be ideal were they not banned in the UK, but you can get a similar look with some healthy water lettuce, Pistia stratiotes, along with maybe some frogbit, Limnobium. If you’re not a fan of floaters, then just get some dense, rooty greenery in there. It’s all about creating shade, cover, and somewhere for the cats to forage.

Use a fine substrate of sand (because they’ll bury themselves in it), and over that place a couple of choice bits of wood — if they leach out tannins and discolour the water, then that’s no problem. Physopyxis inhabit both turbid and blackwaters in the wild. Generously apply your chosen debris, drop the plants on the top, cycle the tank and you’re ready to go. Because of all of the organic waste, it might be worth discretely positioning an airstone in a rear corner (decomposition strips oxygen from water) but beyond that a small robust internal filter will be able to deal with the relatively light bioload of the fish themselves.

For tankmates, there are a fair few biotope compatible species. Nannostomus pencilfish would be my first choice, and they’ll thrive in the root structures of the plants. Hatchetfish would be another fine choice, but they occupy a similar niche to the pencils (I’d go for one or the other). If you prefer a brighter centrepiece, then a smaller Apistogramma species might work (though you should probably consider a larger tank for this). By going for a more voluminous tank, shoals of tetras, Corydoras and larger Apistogramma can all be considered.

Getting the water chemistry right for them is easy. They don’t need anything extreme, so just aim for soft (below 8°H) water on the slightly acidic side of neutral (6.0-7.0pH) and you won’t go far wrong. Keep on top of waterchanges though — don’t assume that their taste for debris means that they can handle deteriorating conditions. And don’t be afraid of large changes, 40-50% of the water changed weekly will leave them unfazed. As a competent aquarist, you’ll have the sense to make sure that any replacement water is around the same temperature as the water in the tank, so as not to shock them, and the tank wants to be kept somewhere in the 23-26°C region.

Read the rest of the feature in the July issue, available to read instantly on our digital edition HERE  or purchase the print edition HERE.