Let's hear it for the Dwarf gourami! The Dwarf gourami has long been among the most popular community fish, but in recent years its reputation as a hardy, easy-to-keep aquarium resident has taken a knock. So is it still worth keeping them on that beginner's wish list? Neale Monks thinks so...

Dwarf gouramis are enduringly popular fish with beginners to the hobby, but they have a bit of a mixed reputation among experienced hobbyists and retailers. 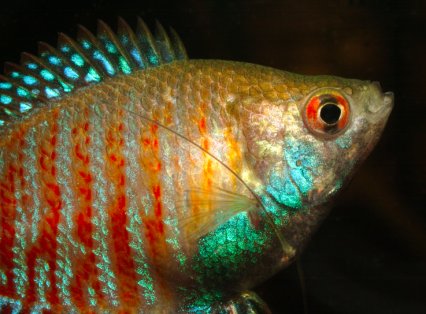 To their credit, Dwarf gouramis are very pretty little fish sporting colours that wouldn’t look out of place in a reef tank. They are also very adaptable and easy to feed, and rarely cause problems so far as aggression goes.

However, the debit side of the equation is worrying. As far back as the early 1980s aquarists had noticed the species seemed to be prone to untreatable diseases, with mycobacteria infections commonly suspected for their malaise.

More recently vets have identified a virus called the Dwarf gourami Iridovirus (DGIV) that seems to be causing real problems on East-Asian fish farms. One widely-quoted estimate suggests 22% of specimens shipped out of Singapore carry the virus — and, given the virus seems to be invariably fatal and so far untreatable, that’s a scary statistic!

So what’s an aquarist to do?

Should you avoid the species altogether, in favour of one of its less sensitive relatives? Or is it possible to choose healthy specimens and thereby improve the odds you’ll take home a Dwarf gourami that’ll live a long and happy life? 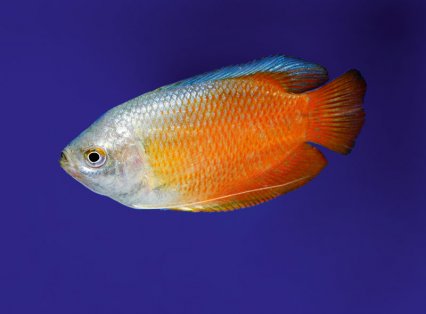 Let’s start with the most important rule, which is to simply reject any Dwarf gouramis from any retailer’s tank that also contains sick or dead specimens. That’s a pretty good rule when shopping for fish generally, but it’s absolutely essential when dealing with Dwarf gouramis. 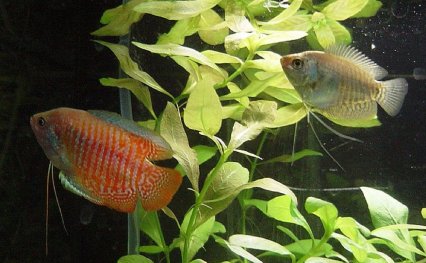 In good condition, Dwarf gouramis are busy fish that spend time swimming about at all levels of the aquarium. Males often spar with one another and bullying may cause some males to be more reticent than others. However, both sexes should be alert and active.

Like all fish they can be shy or nervous in the wrong tank and they may be bullied by inhabitants like dwarf cichlids or nippy barbs.

Dwarf gouramis should appear bold and confident. You might want to ask your retailer to feed the specimens on sale and look to see that they’re all showing an appropriate level of interest in what’s offered.

Unless of course you can explain any unusual behaviour, reject Dwarf gouramis that seem sedentary or weak, particularly if they are hiding away at the bottom all the time.

Coloration tells a lot about the condition of a fish, and healthy male Dwarf gouramis should have strong, vibrant colours.

Both sexes should look gently rounded rather than fat — reject specimens that seem unnaturally bloated or swollen. They may simply be overfed or constipated, but it’s scarcely worth the risk. It’s just as important to reject those unusually thin, because wasting away is common symptom of both mycobacteria infections and DGIV. 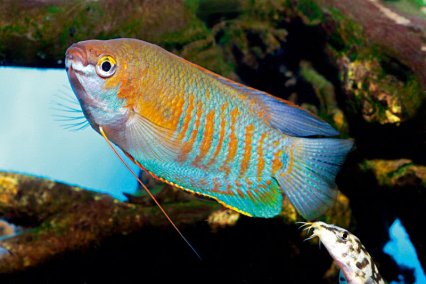 Other gouramis worth considering

They both look slightly longer and more thickly-set than Dwarf gouramis but exhibit similar coloration, although tending towards thicker brick-red stripes rather than the thin and rather more sharply-defined cardinal red stripes typical of Dwarf gouramis.

On the whole both species are very peaceful and easygoing, but, like many gouramis, the males can be territorial, even aggressive, when spawning. This behaviour isn’t necessarily any different to Dwarf gouramis, but, being that much bigger, the potential for problems is a little greater.

That said, if kept in aquaria of suitable size, for example from 90l/20 gal. upwards, these species are easy to accommodate. They get along great with things like non-nippy tetras, barbs and danios as well all the usual community tank catfish and loaches.

Many of the specimens on sale are likely to be hybrids, so worrying about the distinctions between them doesn’t make much sense.

As mentioned earlier, the wild-type forms of both species have irregular, slightly oblique brick-red bands on their bluish flanks, with males tending to have stronger coloration than females.

Artificial varieties are commonplace, particularly the orangey-yellow 'sunset' forms without any bands on their flanks. 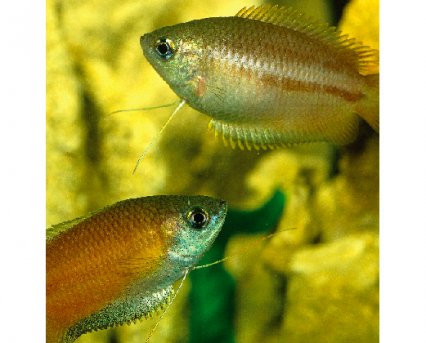 One last little gourami that’s worth a mention is the Honey gourami (Trichogaster chuna).

The wild-type form of this species shows strong sexual dimorphism. Females are a fairly drab yellowy-brown with a dark band running from snout to tail, whereas males are deep golden-yellow with an extensive black patch that covers the chin, throat and belly. This dark patch is particularly well developed when the fish are in breeding condition, turning almost black.

Males also have a distinctive yellow band across the top of the dorsal fin.

Several artificial forms are sold as well and while these don’t exhibit the interesting changes in colour that mark the wild-type fish, they’re nice-looking fish nonetheless. The most popular of these is probably the 'Red sunset' form that is basically orangey-red in colour.

Compared to the Dwarf gourami, the Honey gourami is smaller, shyer, and more prone to hiding in aquaria with boisterous tank mates. Wild-caught specimens have had the reputation for being sensitive fish, especially if kept in hard water, and older books often describe this species as being one for the more experienced hobbyist.

However, the farmed specimens seem to be quite tough animals and provided they are kept in well-planted aquaria with only the most gentle tank mates, such as small tetras, then these fish are very easy to keep.

Like all fish, these species have their own personalities and temperaments, and so it is prudent to monitor them for the first few days after addition to check for behavioural anomalies.

Good water quality is always key,  so it’s best to add them to tanks that are matured and have been running for a few months without problems. 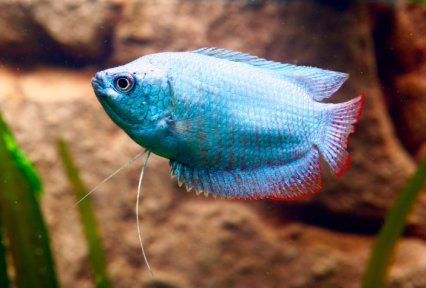 The Dwarf should still be top of that list!

With some excellent alternatives available, is there really any point to buying Dwarf gouramis? Yes, indeed!

While Banded, Thick-lipped and Honey gouramis all have their places in community tanks of various sorts, the Dwarf still occupies a sweet spot when it comes to size, coloration and personality. You just have to be careful when shopping. Look over potential purchases thoroughly, make sure they look healthy and behaving normally.

Once you have your Dwarf gouramis, you might want to think about breeding them. This is one of those species for which there’s a ready market and I’ve had store owners tell me they’d pay good money for locally-bred, disease-free specimens. The demand for Dwarf gouramis remains strong, whatever their foibles, so if you’re in the market for a breeding project, they may be just the thing to try!

But even if you don’t plan on breeding them, this is a species about which there’s so much to enjoy.