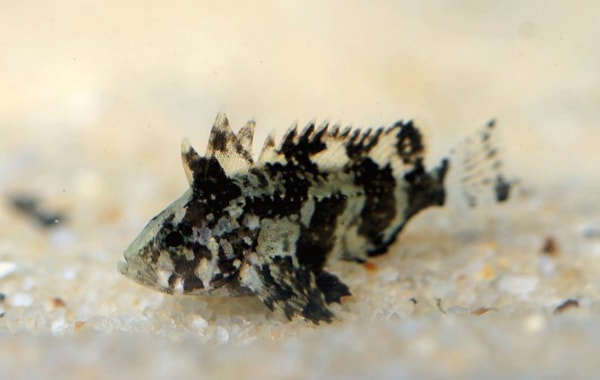 This unusual brackish goblinfish, Neovespicula depressifrons, is rather delicate — but also venomous, as Matt Clarke explains.

Origin: This species is found in marine and brackish waters through the Indo West Pacific. Museum specimens have been recorded from Indonesia, New Guinea and the Philippines.

Water: This euryhaline fish is found in brackish, marine and freshwater areas. These ones were doing well in slightly salty water (around 1-2 ppt). They're unlikely to survive long-term in a freshwater system.

Aquarium: A brackish tank with a soft, sandy substrate and plenty of hiding places should be good. They mix well with other fishes, but they're relatively delicate, so don't keep them with anything too boisterous or nippy. That huge dorsal fin is an easy target for fin nippers, such as puffers, for example.

Diet: These are probably best fed on frozen foods, such as brineshrimp, mysis, bloodworms and black mosquito larvae.

Notes: These weird fish scorpaeniformes are members of the Tetrarogidae family. Like other scorpaeniformes, these tetrarogids are venomous (there are glands at the bases of certain spines), so take care when netting them and during maintenance.

Identification: As far as I know, this is the only Neovespicula species. There are also four species of Vespicula and one Pseudovespicula, but these are marine.