Gastropods, which includes slugs and snails, are a diverse group. They comprise some 40,000 species whose habits range from grazing herbivores to out-and-out predators.

Many can be usefully employed in the aquarium for their janitorial capabilities, primarily for their ability to graze away nuisance algae.

Correct identification of any can be tricky, however, and it’s important to determine the habits and size of any purchase to prevent nasty surprises.

This genus name is inspired by the shells’ resemblance to a turban. Many snails are sold generically as ‘turbo snails’, although the real deal refers to only a few specific gastropods, identifiable by their rounded shell shape and their operculum — a flap used to close off the aperture.

Overstocking is a common mistake when adding these to the aquarium. One per 50 l/11 gal is usually a sufficient ratio, as algal growth needs to be able to sustain any Turbo population. 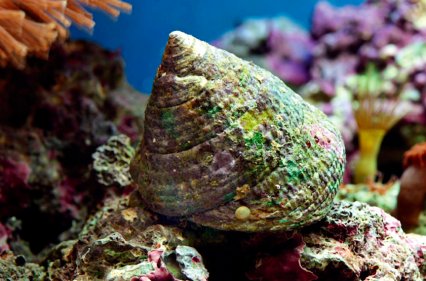 These are also sold as the 'giant turbo', due to their resemblance, and larger ultimate size — some growing to more than 8cm/3.1” across. They usually have a smooth shell too.

Being large, overstocking is common as a surprising amount of algal growth is needed to sustain them. Aim for no more than one snail per 100 l/22 gal.

Frequently offered is the Banded trochus (Trochus histrio) from the Indo-Pacific, which is a good value and hardy grazer.

Snails of the Cerithium genus are often available as part of the reef aquarium’s janitorial crew and these cone-shaped molluscs are always an excellent choice because of their excellent grazing and scavenging abilities. 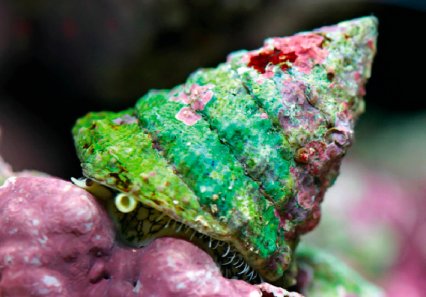 These hardy snails are also frequently sold as 'turbos' and handy on account of their small size, making them ideal for nano systems. Consider one snail per 25 l/5.5 gal. Astraea tecta is worth considering, if only because of its attractive pyramid-shaped shell.

The conches of the Strombidae family can greatly enhance the captive reef and some species can make short work of algae as well as consuming detritus in hard-to-reach places.

The Caribbean queen conch (Strombus gigas) grows to 30cm/12”, making it unsuitable for home aquaria. Instead, opt for one of the smaller sand-sifting conches (Strombus spp). These plough through the substrate, consuming detritus and filamentous algae, so provide a suitable sand bed. 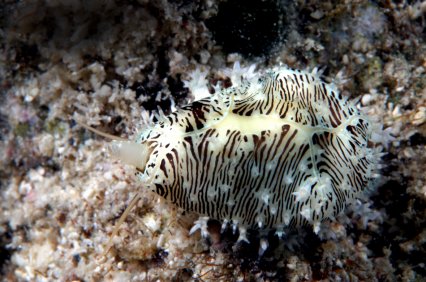 These can make excellent grazers, although there are exceptions and research and positive species ID is essential. They’re characterised by highly polished shells, at least partially covered by the mollusc’s mantle during movement.

The most commonly kept species in the aquarium are the Money cowrie (Cypraea moneta) — pictured above — and the Ring cowrie (C. annulus). Both of these Indo-Pacific creatures are small and make great janitors.

The Tiger cowrie (C. tigris) can be iffy. Characterised by its mottled brown and beige shell, this Indo-Pacific species grows to some 10cm/4”, depending on where it was collected. These can dislodge rockwork as they bumble around and, while useful scavengers, may also predate on sessile invertebrates. Anemones, soft corals and sponges can all be potential victims. 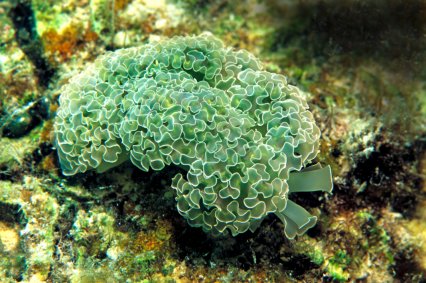 If it’s weird you want, how about one that looks like lettuce?

The sea hare is a completely different nudibranch. It is so called because of the ‘bunny ear’ appendages known as rhinophores  and used for chemical detection.

Sea hares may use extensions of the mantle to swim, which is quite a sight.

Some species are challenging, due to specialised feeding requirements, but a few may be attempted by the dedicated.

For example, the Frilly sea hare (Elysia crispata, formerly known as Tridachia crispata) at up to 8cm/3.1” and from the Caribbean is a strict herbivore. It requires plenty of algae and mature live rock, but a specimen can be sustained in a reef aquarium.

This species has highly variable coloration, but it’s easy to see why adults are given the common name of Lettuce sea slug, thanks to the bizarre folded lobes adorning the mollusc’s body.

Several imported gastropods shouldn’t be contemplated by responsible marine aquarists. These include:

Even potentially deadly, they are sometimes seen in the trade and are not restricted under the UK’s Dangerous Wild Animal legislation.

Members of the Conus genus predate other animals, including fish and other molluscs. They may be inactive during the day, burying themselves in the substrate. However, at night, they emerge to stalk their prey.

With a touch as deft as a ninja warrior, they can ambush sleeping fish and other hapless victims, spearing them with a modified disposable radula linked to a poison glad. The poisons are known as conotoxins and among the most potent neurotoxins known to science.

You can recognise most members of the genus, thanks to their distinctive shell morphology, as it’s easy to see why they’re called cone shells. 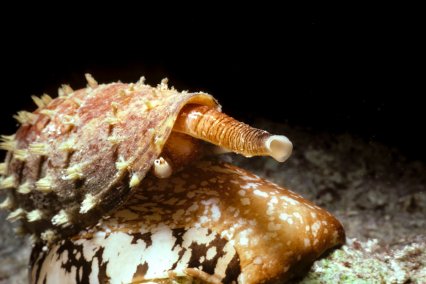 The Geography cone (C. geographus) — pictured above — is from the Indo-West Pacific and grows to 10cm/4”, while the Literary cone (C. litteratus), up to 13cm/5.1”  and from the Indo-Pacific, has distinctive brown spots on its yellow shell. The Textile cone (C. textile) growing to 10cm/4”, is also an Indo-Pacific species and has a beautiful shell, making it highly prized. Just don’t think about keeping one, as all are also venomous predators! 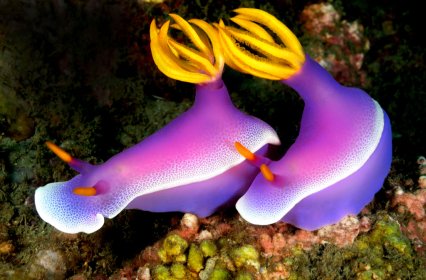 True sea slugs or nudibranchs (meaning ‘naked gills’) comprise some of the ocean’s most psychedelic animals and their stunning coloration betrays their toxicity to would-be predators.

In fact, their distasteful nature is often due to their ability to sequester (store) the stinging cells (cnidocytes) from their prey, such as corals and hydroids. The undischarged cells are known as kleptocnidae (‘stolen stings’) and can be deployed against any potential predator.

The aposematic (warning) coloration of nudibranchs seems universally recognised, as they are given a wide berth. Many species are tiny, but some range up to nearly 0.5m/1.6’ long.

Occasionally seen and quite expensive is the Spanish dancer (Hexabrachus sanguineus). This 40cm/16” creature has a wide distribution from the tropical Atlantic to the Indo-Pacific and there’s great coloration diversity among individuals.

Its common name is inspired by its habit of ‘dancing’ flamenco-style when swimming, courtesy of flapping actions of its mantle.

These are difficult to maintain, due to their diet of sponges — and this species is among the least fussy of nudibranchs. Incidentally, this plays host on the reef to the Emperor shrimp (Periclimines imperator), which hitches a ride as well as feeding on its mucus secretions.

While their beauty makes them highly desirable, feeding habits make nudibranchs a poor choice and responsible aquarists should avoid them.

Many species are obligate feeders of one particular prey species of coral or hydroid — in other words, they can only survive on that species and will starve if their natural diet is not provided.

Species ID is complicated and matching a nudibranch to its natural diet, plus providing adequate quantities of that diet, is beyond the realms of most.

Murexes (Murex spp.) are occasionally picked up by some unwitting reefkeepers who live to quickly regret their decision when this predatory snail has finished off other molluscs in the tank as well as tubeworms.

To be fair, it’s easy to see why murexes are so appealing, thanks to their bizarre shell shapes adorned with prominent spikes.

However, these fascinating and expensive gastropods are not suitable for most reef systems, although they can be successfully kept in a FOWLR (Fish Only With Live Rock) aquarium system with a few fish.

Never use any copper remedies

Gastropods are extremely sensitive to copper, so never subject them to copper-based medication — and grazers need to be introduced to systems with sufficient algal growth to prevent starvation.

Supplementary feeding may be necessary in certain cases. 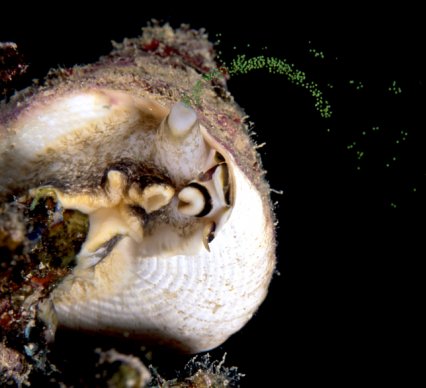 Gastropods, as with all molluscs, fare badly if subjected to rapid changes in temperature and/or water chemistry. For this reason, take extra care and plenty of time when acclimatising them and use the drip method to ensure fine control when altering water parameters after transport.