Phantom plecs are a fascinating fish with a rich geographic story to tell. Here’s how you can set up your tank for these awesome fish.

Phantom plecs are usually offered to us small, but with prices that regularly scrape beyond £40. They’re fast approaching their 25th year in the hobby, first sold back in the great ‘plec rush’ somewhere around 1995. And while they never quite gained the same slavish devotees as the Zebra plecs or Golden nuggets, they remain a firm favourite.

There are three different phantoms, and their taxonomy is no small source of confusion. The usual phantom you’ll find will be the standard Green phantom, often marked up as L200. This is Hemiancistrus subviridis — we think.

It wasn’t long after L200 arrived that another high-finned version also began to appear in stores, unimaginatively named L200 hi-fin. This fish, hailing from nearby, was subsequently described as Baryancistrus demantoides — a whole new genus erected for a seemingly trivial difference.

Further downstream from these two species, you can find the Blue phantom plec, or L128. This fish is yet to be formally described, but the guess at this time is that it’s a colour variant of H. subviridis. Some collectors have recorded intermediate stages of the fish found between the upstream and downstream locations, although they have yet to appear in the hobby.

Fortunately, care for all remains the same, and telling them apart is simple. It’s either a green fish, a green fish with a large dorsal, or a blue fish, and you can identify from there.

If you’re still stuck between L200 and L200 hi-fin, one clue can be found in the mouth — L200 has a perfectly round mouth, whereas the hi-fin’s is rectangular.

Wild fish grow to around 20-25cm, though reaching 20cm is optimistic in a tank. Still, an aquarium with at least a 150x45cm footprint is a must for keeping a pair of adults.

Decorate with large, rounded rocks and add plenty of caves. A sand substrate will be suitable, and lighting needn’t be intense.

These fish don’t ‘get’ plants and are prone to uprooting or eating them, but gluing some Anubias or Bucephalandra onto the tops of stones may work. The fish really don’t care though.

Wild fish live in torrential flow, and, in an aquarium, you only need to ensure they get huge amounts of oxygenation. Position powerheads or flow pumps to disturb the surface, and don’t be afraid to add three or four good-sized airstones to the tank. Combine both approaches, and don’t rely on either on its own to produce sufficient oxygen. This applies all the more if you’re keeping them in a heavily-stocked community tank. Indeed, one problem can be finding tankmates that can tolerate such turbulence.

Be bold with the temperature. Pending season, Phantoms can be caught in water well over 30°C. In the home tank, aim for a minimum of 27°C. Water should be soft and slightly acidic, with a pH close to 6.5, though they will tolerate 6.0 to 7.8pH without problems.

They are intolerant of poor water quality, so only consider them for a long-established and well-maintained aquarium. Any tank with nitrate levels over 20ppm is a no-no.

Wild fish are aufwuchs and algae eaters, but in the tank, they are omnivores. Periodic offerings of bloodworm go down well, and regular offerings of fresh, green food, like spinach and courgette, are gratefully received, but, as a daily staple, you’re best offering Hikari sinking algae wafers. Keeping things varied is the key to success.

They can be territorial, more with each other than with other catfish, but rarely to the point of aggression.

If you manage to purchase the fish in pairs, there’s every chance they’ll spawn. Like many plecs, they’re cave spawners, and from around 10cm upwards they will start to breed if caves are present. Females lay upwards of 30 eggs that hatch inside of a week, and, if you’re raising them on, you can let them work through their yolk sacs before offering them dried foods, which they should be big enough to graze on straightaway. 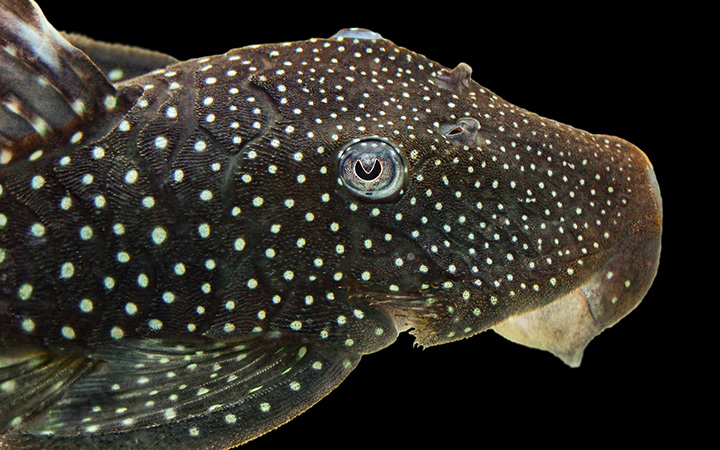 Size: Around 20cm, usually much smaller

Availability and cost: Relatively common; from around £35 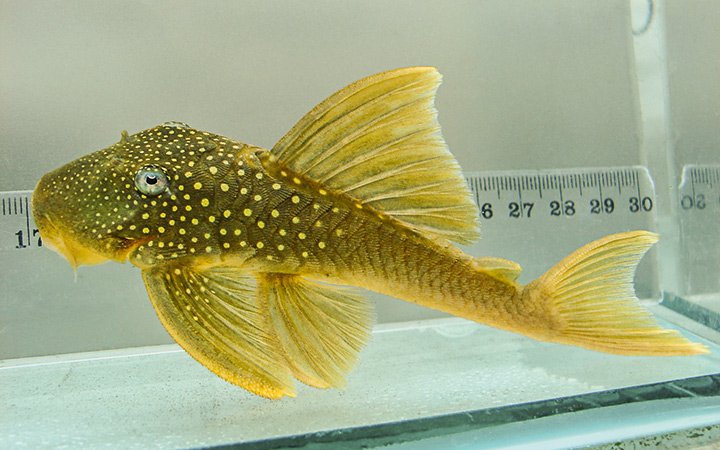 Availability and cost: Relatively common; from around £35

This article was first published in the July 2019 issue of Practical Fishkeeping. All images copyright Ivan Mikolji.