Keeping Kuhli and other Eel loaches in the aquarium Not only are they different, attractive and sociable, the slender Eel loaches are so easy to look after. Emma Turner explains why a group of these is simply great!

The slim shape of Eel loaches set them apart from all others of the loach fraternity. They also differ by having a relatively high number of vertebrae and the dorsal fin is behind the pelvic fin.

Serpentine bottom dwellers, they range widely across South-East Asia, and the various species inhabit a variety of habitats — from standing water to moderate current.

However, most are found in shallow slow forest streams or backwaters, often among peat swamps where tannins stain the water, making it soft and acidic.

Such streams are often shaded by rainforest canopies and abundant marginal vegetation along the banks. The substrate is usually of sand, silt, mud, and peat.

Surrounded by such heavy foliage, it’s no surprise that leaves regularly fall into the water and these piles decay to form the preferred habitat of these fish.

Eel loaches comprise the 33 members of the genus Pangio. Small and elongated, they are frequently and inappropriately called Kuhli loaches or, worse still, Coolie loaches.

These are derived from the name of Heinrich Kuhl (1797-1821), a pioneer collector of flora and fauna in Java and who P. kuhlii was named after.

As with other cobitid loaches, Eel loaches have sharp suborbital spines. These are usually hardly noticed, being held flat and well concealed in a skin pouch. Yet they can be quickly raised if the fish feels threatened or stressed.

Shelfordii has a body with a conspicuous series of mid-lateral blotches, sometimes forming a solid lateral stripe, dark bar at caudal base, several rows of spots on caudal fin with slender caudal peduncle, and four pairs of barbels — the fourth pair being extensions of the lower lip.

The distinguishing characteristics of the kuhlii complex are not so clear and it’s now thought that the genuine P. kuhlii has never been exported from its native Java.

Most stripy so-called ‘Kuhli loaches’ in the trade have actually been P. semicincta.

However, a general description of fish from this complex would describe a body depth eight times in standard length and three pairs of barbels, of which those nearest the nose are the longest.

It’s a yellow fish with broad vertical bands that are mostly confined to the upper half of body and bottom half of the tail fin with an asymmetrical black patch.

Body patterning alone, however, can’t be relied on as definitive identification, as most patterns will be highly irregular.

As these fish age,  the patterns mature too and, in some species, the saddles ‘break up’ to further confuse matters.

Collection location information, coupled with countable traits and, to some degree, pattern are key to accurate identification. 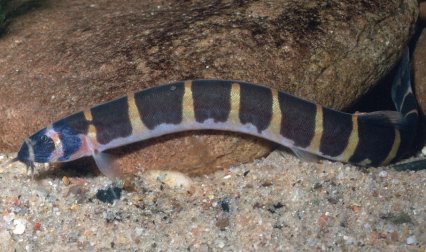 The right set up for these loaches

Your tank should be mature and ideally at least 60cm/2’ long. Water should be soft and acidic, so aim for a pH between 6.0-7.0 and a general hardness of less than 12-15° (DH). Peat filtration can be beneficial in this respect.

Furnish the bottom with a soft sand substrate and decorate with driftwood, smooth rocks and pebbles. If you must use gravel, ensure it is of a fine grade and smooth. Eel Loaches love to nose about in substrate and some species like to bury themselves in it, with just their faces protruding.

A fine, smooth substratum will not only protect their delicate sensory barbels, but also prevent damaging their extremely small-scaled bodies when they move through it.

Good filtration is a must, but there should only be a gentle current. Ensure your Eel loaches cannot get into filters or powerheads, as they can squeeze into the tiniest gaps.

If wanting to treat your loaches to a home from home treat add dried Indian almond leaves from the Terminalia catappa tree. They are available from many aquatics stores or online.

When waterlogged they will sink to the bottom and the loaches will take up residence underneath. These will also release tannins to help naturally acidify the water. However, the leaves will need to be replaced periodically as they break down.

Eel loaches are among the most sociable of fish and should always be kept in numbers. Ten should be the absolute minimum together and they will spend many hours tangled up together in their favourite hiding places or snaking around the stems of shady plants.

They are a pleasure to observe. and the more safe hiding places you provide for them the more likely you will see them. Larger groups boost confidence and tank mates of a similar size and disposition — Boraras cyprinids are ideal — can help encourage Eel loaches out in to the open.

Make regular small water changes and after each one the loaches will dart around in heightened activity. 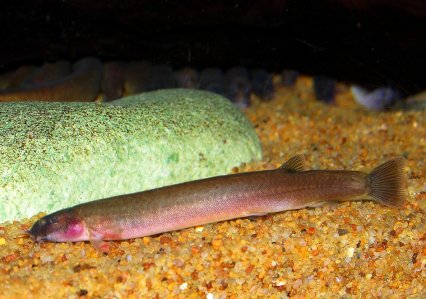 To date, only a couple of species have been successfully bred in home aquaria and these have been accidental!

The most commonly spawned species appears to be P. oblonga (picture above by Emma Turner) and although no courtship has been documented, fry have been found under old undergravel filter plates or between rounded gravel.

The only other species I know to have been bred in captivity is P. doriae.

My partner and I were given a group of fry by a customer who frequents the aquatics store where we work. Although the spawning was not documented, from the tiny size at which we received these loaches there can be no doubt that these were captive bred.

Mature Eel loaches can usually be sexed. When females become gravid they can develop enormous bellies with greenish eggs showing through the skin, and in males — except P. alcoides, P. incognito and P. pulla — the second pectoral ray, and sometimes the third, is thickened.

In addition, for most species the pectoral and pelvic fins are longer in males than in females.

Even though most success appears to have come from tanks with a gravel substrate, I would still recommend keeping these fish on sand.

However, it would be worth sectioning off an area of the substrate and creating in it a small area of rounded, fine gravel.

Should the fish happen to spawn, many eggs could fall to safety in much the same way controlled spawnings of many other species are carried out over marbles. 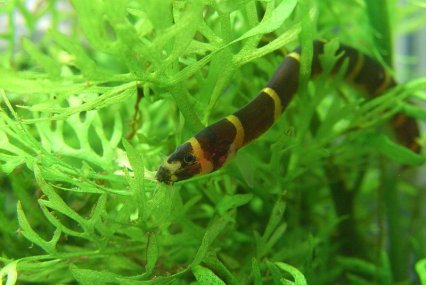 Guide to some familiar species

Some of the more commonly seen Eel loaches in the trade include:

This stripy species springs to many minds as the ‘Kuhli loach’ and this is the most likely fish to be mislabelled as P. kuhlii.

Markings vary, but this species usually has nine to 12 dark bars over an orangey background. The bars can be uneven, even joining together on the dorsal surface to form saddles.

Currently known from the Malay Peninsula and the Greater Sunda Islands of Borneo and Sumatra, it may have a much wider distribution. 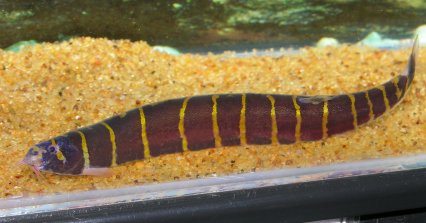 This is heavily built and sometimes referred to as the ‘Giant Kuhli Loach’. Adults are easily recognisable by their sheer depth of body and wide black markings interspaced by thin yellow/orange bars. The caudal fin is usually completely black or with a black base blotch and a subterminal black bar or row of spots.

Known from the Mekong basin of Cambodia, Laos, Vietnam, and also from South-East Thailand, It can grow to 10cm/4". 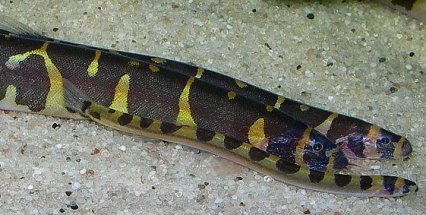 P. cuneovirgata (Raut, 1957) pictured above, in foreground, by Emma Turner

Truly a dwarf, the beautiful P. cuneovirgata reaches a maximum 5cm/2”. It is known from the Malay Peninsula, Sumatra and West Java, and is occasionally seen in the shops, most often as a contaminant among batches of other Pangio species.

Body pattern consists of seven to 13 short dark saddles confined to the dorsal half of the body and a black blotch at the caudal fin base. The belly is white, while the dorsal surface has a yellowy-olive background.

This is a popular ‘un-banded’ species that’s often sold under the ‘Black Kuhli loach’ name and in certain older literature was known as P. javanicus.

Having a uniform colour that can be anything from reddish brown to black, this a hardy species reaching a maximum 8cm/3.2”. It has been recorded from Borneo, Cambodia, Java, Laos, the Malay Peninsula, Thailand, and Vietnam.

P. oblonga is the species that’s most frequently accidentally spawned in aquaria. 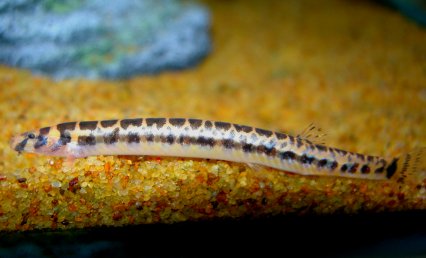 This mottled species occasionally turns up in the trade, being much sought after. It is currently known from Borneo, Sumatra, the Malay Peninsula and Singapore, and is sold under the Shelford’s Prickly Eye name tag.

It typically grows to about 8cm/3.2” and no two fish share the same pattern. There are notable variations in markings/coloration between different geographical populations too. 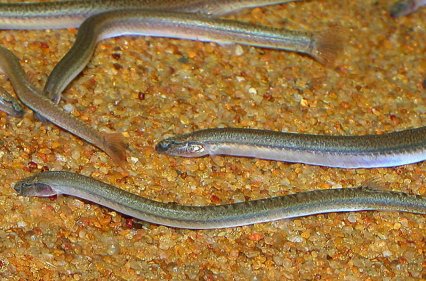 P. anguillaris is recognised as the Eel ‘Kuhli’ loach, being recorded from Cambodia, Indonesia, Laos, Malaysia, Thailand and Vietnam.

These can reach up to 12.5cm/5” in length and enjoy burrowing right into the substrate where they can often be seen lounging in huge colonies with just their faces poking out.

This is another slender and elongate loach that can attain 12.5cm/5”. It is known to inhabit the Malay Peninsula as well as Sarawak, Borneo.

Natural geographical colour morphs exist, including an attractive pink form. This species has been bred in aquaria.