Keeping anemones in the reef aquarium 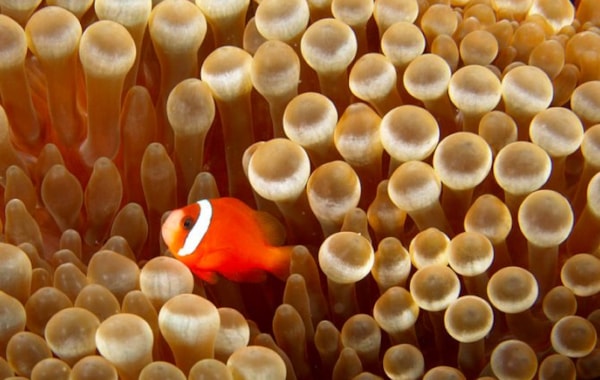 Anemones are among the most fascinating of the ocean’s inhabitants — and who could fail to be inspired by the beguiling sight of a huge carpet anemone and its clownfish symbionts?

Not only are they fascinating, but when the creature’s pedal disc becomes lacerated a dropped shard of body tissue can create a new individual on the substrate. It’s a reproductive strategy which sounds straight out of a John Carpenter film.

Anemones can be among the more challenging of inverts, with many requiring very specific conditions in aquaria.

Anemones are cnidarians, a group including corals and jellies. They have radial symmetry and tentacles with batteries of nematocysts (stinging cells) around a central mouth. The creature itself will either anchor to a hard substrate or burrow into sand or mud sediments using its pedal disc.

The anemone’s morphology may vary depending on adapting to habitat, although the fundamental body plan remains constant. Many tropical ones live with zooxanthellae and several species are themselves symbiotic with many animals other than clownfish! 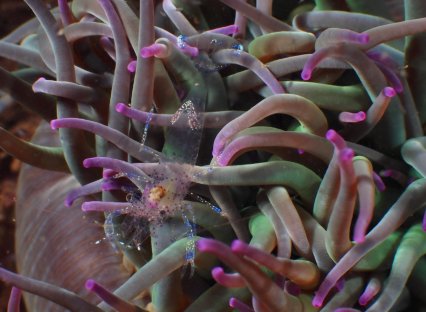 Anemones can have demanding parameters and will shrivel and 'sulk' if conditions are not to their liking. They need optimal water quality, along with oxygen levels as near saturation as possible. Effective skimming is therefore highly desirable.

A mature system is preferable, as any spikes of ammonia could be disastrous. Most popular species are hermatypic, housing zooxanthellae as symbiotic algae, so suitably intense, 'reef quality' lighting is necessary.

Adequate water movement is essential to carry oxygen and food to the anemone and rid it of wastes.

A direct blast from a powerhead would not be appreciated, but chaotic flow patterns are ideal. Also ensure that intakes for any pumps and powerheads are screened to prevent roaming anemones getting sucked in.

When choosing one it should appear 'inflated' and plump rather than shrivelled and covered in mucus.

Examine the pedal disc for signs of trauma – as most physical damage during capture occurs here. If there’s evidence of damage, don’t buy. Acclimatisation should be very slow, using the ‘drip’ method over a couple of hours or so on introduction to a new system.

Avoid taking an anemone out of the water during this process and do not introduce any transport water as this is liable to be ammonia rich.

Some aquarists strongly deny anemones need any supplementary feeding, but others maintain that feeding is necessary to promote health and growth.

Many species will do fine without any supplementary feeding if kept with other invertebrates and a few fish, sustaining themselves on leftovers. Having said that, the Carpet anemones (Stichodactyla spp.), being aggressive and predatory, may benefit from finely-chopped meaty foods twice a week — but be cautious rather than risk pollution through overfeeding.

Many anemones will discharge 'pellets' of partially digested foods. These are a pollution risk and should be removed.

Separate sexes are encountered in many species and reproduction may be utilised. Male and female gametes are released through the mouth in a co-ordinated manner. The resulting eggs develop into motile planula larvae, which find a suitable substrate on which to develop into a polyp.

Asexual methods are also employed. Budding, or the formation of tiny replicates of the parent plant, may be seen in some species. Alternatively, binary fission, during which the anemone splits in two, can be used. 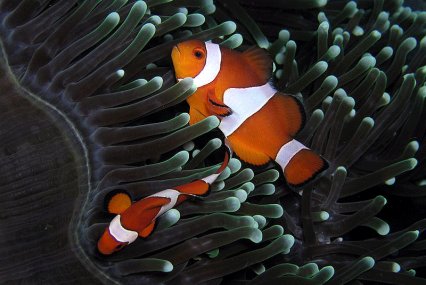 Many anemones are added to existing reef aquariums stocked with corals and other sessile invertebrates, but this isn’t always successful as they may employ ‘chemical warfare’ against heterospecific cnidarians and conspecifics. They are also carnivorous, so many small fish and mobile inverts are fair game.

Bear in mind too that many fish species will naturally peck at anemone tentacles, so never house them with butterflies, large angels, triggers or large puffers. Careful choice of tank mates is therefore essential and mixing anemone species and conspecifics requires plenty of room.

Dyeing is still the dark practice

Some exporters dye various anemone species, such as Heteractis crispa, in a range of outlandish colours.

Although many anemones are available in stunning natural morphs, the practice of dyeing persists. This dooms many anemones to a premature death — even though the animals are beautiful enough without any such enhancement.

Buy only from a reputable dealer who knows the history of his or her stock.

What's available in the hobby? 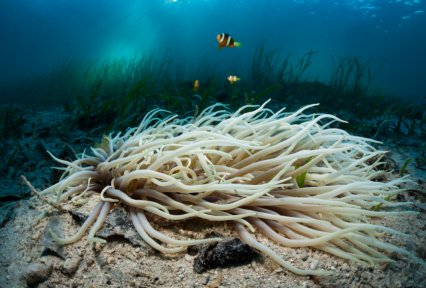 Heteractis crispa, the Sebae anemone, reaches 45cm/18” and has long, thin tentacles with a pink dot at the centre of each. It attaches to a hard substrate and is reasonably hardy. Many species of clownfish will symbiotically associate with this Indo-West Pacific anemone. 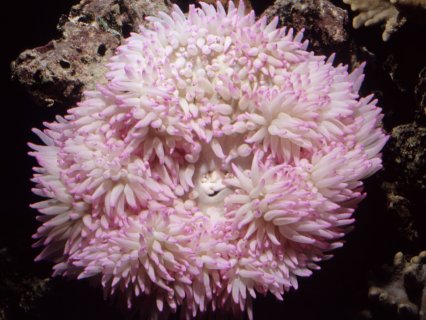 H. malu, the Malu anemone, is an Indo-Pacific species with a relatively long ‘stalk’ buried in the substrate. Highly variable in coloration, this reaches around 20cm/8”.

It symbiotically associates with several species of clownfish. 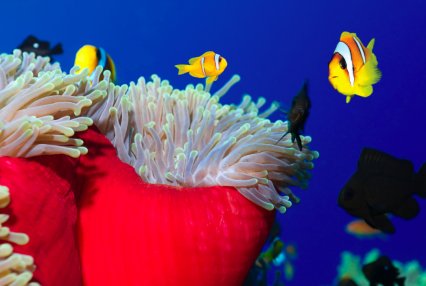 H. magnifica, the Ritteri anemone, is another symbiont and unsuitable for most captive systems, requiring several hundred litres as it reaches 1m/3.3’. It attaches to a rocky substrate and is quite mobile. 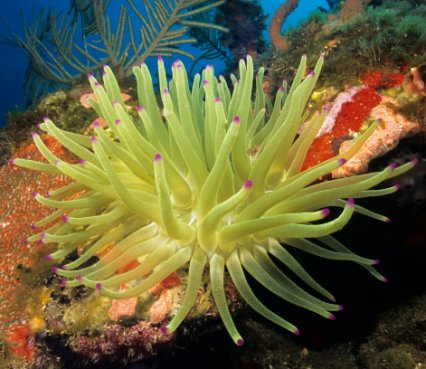 Condylactis gigantea, the Giant Caribbean anemone, grows to 30cm/12” and is naturally found on rocky substrates in shallow water.

Clownfish don’t naturally associate with this anemone, as there are none native to the region, although some species may form unnatural partnerships in the aquarium. Nevertheless, many species naturally act as symbionts, including Periclemenes shrimps, Mithrax crabs, Arrow crabs and many others.

This is a relatively demanding anemone in terms of lighting. 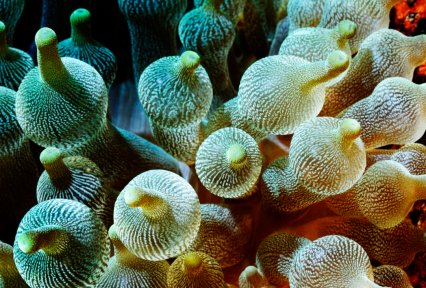 Entacmaea quadricolor, the Bubble-tip anemone,  from the Indo-Pacific is hardy, relatively inexpensive and makes a great host for many clownfish species, as well as Periclemines shrimps and Porcelain crabs of the Neopetrolisthes genus.

Although its common name is inspired by often bulb-tipped tentacles, many specimens don’t exhibit this characteristic. This species is available in a variety of colour morphs, with the stunning red desirable and expensive.

Bubble-tips will, in optimal conditions, readily undergo binary fission in the aquarium.

This species is fairly undemanding in terms of lighting and adapts well to a range of intensities. It’s the best first-time anemone, growing to 30cm/12”. 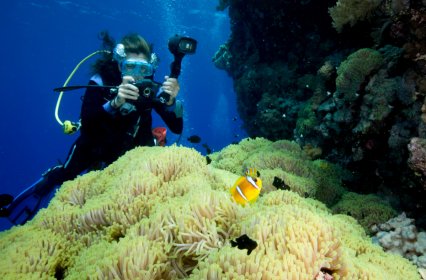 Carpet anemones are impressive, with some species growing to more than 1m/3.3’. Their sheer size and aggression mean they should be taken on only after careful thought and planning.

Any aquarium environment must meet some exacting needs and it’s equally important that the existing species mix of your system doesn’t fall prey to this feisty cnidarian.

The Giant carpet anemone (Sticholdactyla gigantea), needs a minimum of 500 l/110 gal, with an expansive sand bed at least 10cm/4” to burrow into as well as some form of hard substrate.

Carpet anemones will consume a wide variety of fish and invertebrates, even the occasional clownfish! Despite this, they can play host to clownfish and Threespot domino damsels (Dascyllus trimaculatus) as well as Periclemenes shrimps.

Careful planning is key here so maintain Carpet anemones as part of a dedicated system —limiting invertebrates and fish to a minimum while including 'tried and tested' symbionts.

The following three species are all Indo-Pacific in origin.

S. gigantea grows to 1m/3’3’ and is available in a range of colour morphs. Expect to pay top dollar for more 'exotic' ones. This species requires solid substrate in addition to a sand bed.

Haddon’s anemone (S. haddoni) grows to around two-thirds the size of S. gigantea and requires a relatively deep sand bed. This species is also seen in a range of colour morphs.

Merten’s anemone (S. mertensii) differs from the previous two in requiring a rocky substrate. Reaching sizes greater than S. gigantea, this species is infrequently collected. When available, specimens carry a hefty price tag but are nevertheless quickly snapped up. 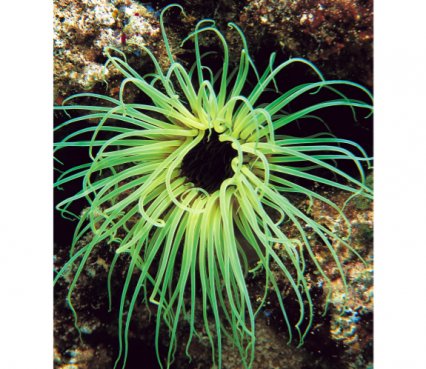 The Cerianthus tube anemones are sometimes offered. They are so named due to their habit of constructing a tube, courtesy of specialised cells.

These anemones are undemanding in terms of lighting and relatively subdued conditions are preferred. They require a sandy substrate in which to burrow and take care when homing them with small fish species, as even clownfish may be eaten!

Most common in the trade is the Indo-Pacific C. membranaceus which grows to 20cm/8”, although some coloured species may be offered — usually identified only to genus level.

Bartholomea annulata, the Curlycue or Corkscrew anemone, grows to 15cm/6” and is characterised by curly-looking tentacles. Hailing from the tropical West Atlantic, this species is cheap and cheerful. It tolerates lower lighting levels than many anemones and is of the same family as Aiptasia, the rock anemone.

It’s less problematical, however, but can be aggressive towards other invertebrates. It lives in association with Alpheus armautus shrimps in the wild.