The beautiful Green phantom plec, often still labelled as L200 in the shops, could actually be any of at least three species, says Rupert Collins.

Introduced in 1995, a new bright green loricariid plec instantly captured the imagination of catfish enthusiasts the world over. Before its scientific description ten years later, the fish was known under the L200 tag name, or the mysterious ‘Green phantom plec’.

The species is hard to confuse with many other loricariids, as it has a distinctive olive green coloration, yellowish fins and creamy golden spots. However, it can be confused with two others.

When imports of this suckermouth catfish began, shipments were contaminated with a different form of L200, coined the L200 ‘hifin’. This appeared almost identical at the time, but had an enlarged, shark-like dorsal fin. More differences were then noticed, such as the hifin’s membranous connection between the dorsal and adipose fins.

Subsequent description of L200 as Hemiancistrus subviridis (subviridis meaning greenish), and L200 hifin as Baryancistrus demantoides surprised many in the hobby as the two fishes were not just different species but different genera!

The genus Hemiancistrus is not strongly defined and considered polyphyletic. The group has historically included many species that could not reliably be placed in other genera.

Consequently, when further taxonomic work is carried out, H. subviridis could find itself in a different genus.

H. subviridis and B. demantoides are both found in the upper Orinoco river bordering Colombia and Venezuela. The former appears widely distributed and known from the Río Iguapo, Río Ventuari and Río Casiquiare, as well as the Río Orinoco.

B. demantoides however, is known only from a smaller range around the confluence of the Orinoco and Ventuari. 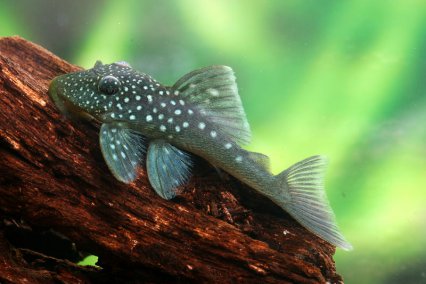 There’s also L128 (pictured above) which superficially appears similar to H. subviridis, but rather than olive green has a bluish-indigo-green hue and usually more spots.

Hemiancistrus sp. L128 is captured for the trade further downstream in the Orinoco near Puerto Ayacucho.

Reports exist of intermediate forms being found in other localities, so it remains to be seen if the L128 population represents a different species or is just part of intraspecific variation within H. subviridis.

Regardless of taxonomic details, the two forms are phenotypically different and so should therefore not be interbred.

Always try to purchase fishes from the same source when setting up breeding colonies.

Natural habitat of H. subviridis, which can reach 20-25cm/8-10”, is typical of other ancistrin catfishes: flowing water over exposed bedrock, in crevices under boulders and within interstices.

Much of the Río Orinoco is part of the granite Guyana Shield formation and the tributaries, where H. subviridis is found, have either a clearwater or mildly blackwater profile. The water is warm, flowing and neutral to slightly acidic. 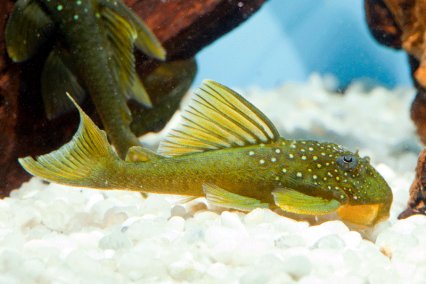 H. subviridis adapts well to aquarium life, providing set-up and water parameters are appropriate and quality stock purchased. Like most fancy ancistrins, they can be in poor shape when imported.

A good dealer will acclimatise and quickly restore them to health, but only buy alert individuals seen to feed, have full bellies and are not shimmying or swimming on the spot.

Most appropriate décor comprises inert rock structures with a thin layer of sand/gravel mix.  As much 3D structure as possible will provide H. subviridis with a natural environment where they can stake out territories, and take to cover quickly.

As these crevice-dwelling fish are territorial, especially when mature, always provide more caves or resting places than fish. Silicone heavy rockwork together to prevent tank breakages.

There are aquatic plants in their wild habitat and, due to size and herbivorous nature of the species, rooted stem plants in the aquarium are unlikely to be successful. Java fern or Anubias attached to bogwood can be used, however, if greenery is desired.

Small amounts of wood are likely in the natural biotope so bogwood branches can be incorporated in your aquarium. 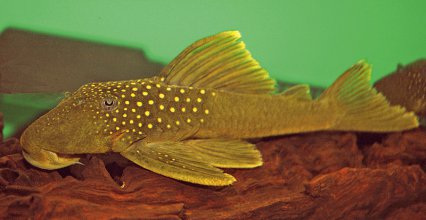 H. subviridis falls into a group of omnivorous loricariids which scrape aufwuchs from hard surfaces. This includes algae, detritus and small invertebrates. Stable isotope analysis carried out at Auburn University in the USA suggested a meat and vegetable signature to diet.

In the aquarium they should have a varied diet of frozen (bloodworms, Mysis shrimp) and prepared foods (algae wafers and quality flake), but blanched vegetables (courgette and sweet potato) should always be available to graze on.

This species is not small so needs a correspondingly large aquarium of several hundred litres, especially if a decent-sized breeding group is to be maintained.

As a thermophilic riverine fish, current is needed to maintain high oxygen levels. Water movement does not need to be unidirectional, but enough to continually turn over the water. Aim for between ten and 20 times tank volume per hour.

Many catfish enthusiasts are moving to high output, reef style circulatory pumps, designed to shift large volumes of water with minimal power. Large loricariids can be big eaters, so heavy duty external power filtration is a necessity. Water changes should also be frequent and copious, with nitrate levels kept below 20mg/l.

Bright aquarium lighting may well encourage algae growth for Hemiancistrus to scrape off but, perhaps initially at least, do not expect to see much of these these large but shy plecs when your full overhead lights are on.

Potential tank mates should enjoy warm turbulent water. Pencilfishes, or tetras such as the Rummynose (Hemmigrammus rhodostomus) from the upper Orinoco would be appropriate as attractive dithers, although many Rasbora or Puntius could be equally suitable.

Small catfish, such as Corydoras sterbai, would also work well and help clean up food scraps.

While H. subviridis can be kept as single specimens in a community of other loricariids, the most rewarding way to enjoy this fish is to maintain a breeding group.

Bear in mind, however, that like most loricariids H. subviridis can become quite belligerent towards any conspecifics and similarly-sized competitors.

Most ancistrini can be sexed in a similar way. Males tend to be larger and have bulkier, broader heads. They will also be hairier, with thick hypertrophied odontodes on the pectoral fins and cheeks.

Odontodes are also present in the body, behind the dorsal fin in males, but not to the degree of dwarf Panaque.

Only mature fishes in good condition can be sexed accurately and as many of the distinguishing features are relative it is not always easy.

Buy a group to try to achieve a viable ratio.

While males are able to reach 25cm/10” and females under 20cm/8”, spawning can be expected at half this size.

H. subviridis is a cave spawner and caves can be constructed from clay tubes, plastic pipes or stacked rocks. Offer a selection of sizes and let the fish choose.

The yellowy eggs are quite large, but expect a female to lay 30-40 per spawn. These take around five days to hatch.

The male usually takes better care of the eggs in his cave, but fry can be target fed in a breeding trap. However, bacterial issues can result from this approach. Best let the male take care of the fry, and once they leave the cave and use up their yolk sacs they can be gathered up and grown out in a separate tank.

Cleanliness is an issue as the fry can be sensitive to bacteria on the substrate, so feed often and never leave anything to rot.