Just look at that little face... No wonder then, that so many fishkeepers find these little puffers so hard to resist.

Just look at that little face... No wonder then, that so many fishkeepers find these little puffers so hard to resist.

With their puppy-dog faces and almost comical swimming style, Dwarf puffers have instant appeal and are sure to become favourites with the whole family.

My family knows well that shaving is a dangerous business. Not because of the risk of cutting myself (which I do with great regularity), but due to the fact that I use shaving time for thinking. When they hear the dreaded words: “I’ve been thinking ...” they’re already bracing themselves for my latest idea. More often than not they are harmless, but occasionally I have a
truly great idea — one that requires immediate action!

I was going through my usual morning routine, when I glanced over to the collection of my kids’ bath-time toys and there, on top of a pink hippo and a red whale, was a rubber porcupine pufferfish. It suddenly brought back all my pufferfish related memories from my time at the Blue Reef Aquarium. I remember being greeted by a friendly Turretfish, Tetrosomus gibbosus, every morning when I walked through the tunnel or being spat at by a large White-spotted puffer, Arothron hispidus, when I was too slow to feed it. Although these are marine species, there are freshwater puffers available with similarly interesting characters. I am always on a lookout for a new challenge, so there and then a decision was made: I had to keep puffers!

On this occasion my idea was greeted with a big cheer from my children, who asked straight away whether they could see the fish puffed up. After explaining that puffers don’t blow themselves up just for fun and in fact they absolutely hate it, we agreed to not upset them. 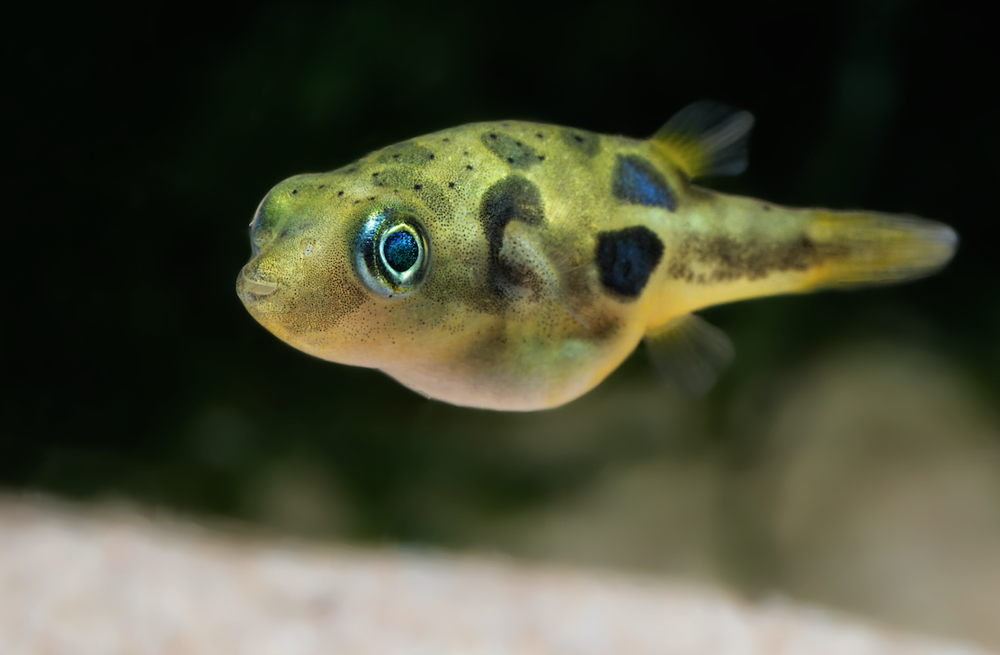 My other restriction was size. I planned to house them in a Superfish Home 80 tank, too small for species like the Giant Mbu, Tetraodon mbu, Fahaka, T. lineatus, and other African species.

I further narrowed down my list based on availability and price, and ended up with a shortlist of three true freshwater species. 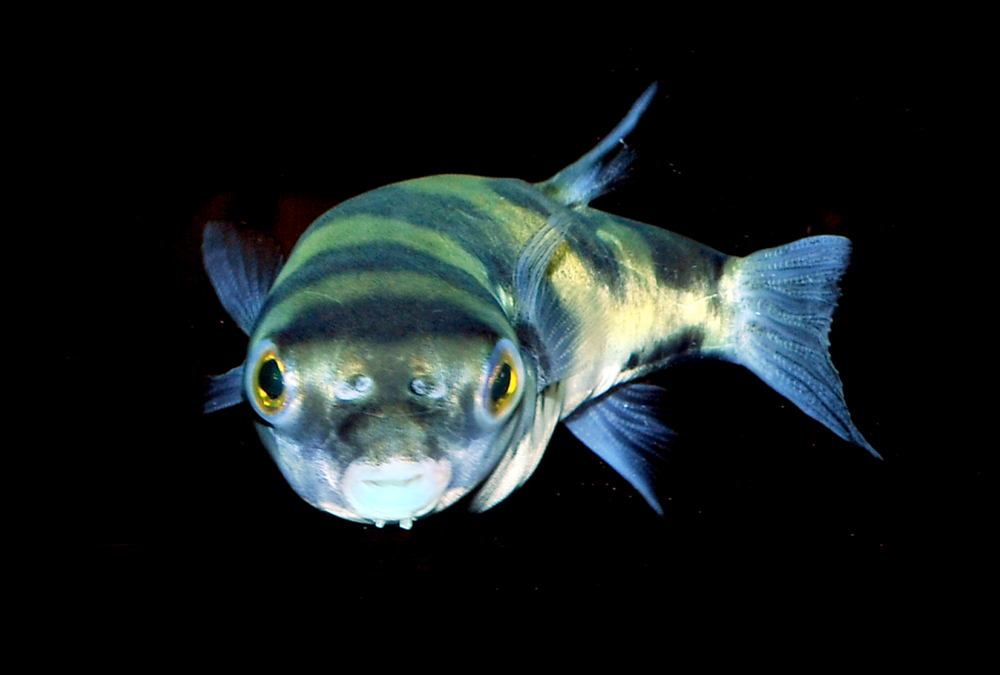 The South American puffer, Colomesus asellus, is a true river puffer, requiring fairly strong flow. They live in shoals in the wild, so keeping more than one shouldn’t be a problem. As they grow to 8cm/3.2in long, an 80 l tank is probably the minimum for a trio, especially considering their messy nature, but I planned to add a powerful external filter, which I was sure would cope. Their teeth may overgrow if no hard shelled food is given, but having plenty of tanks with flourishing snail populations, this wasn’t an issue. But I like fish with breeding potential and there are no reports yet of this species being bred in home aquariums. Although being the first has an appeal, I decided to stay on the tried route. 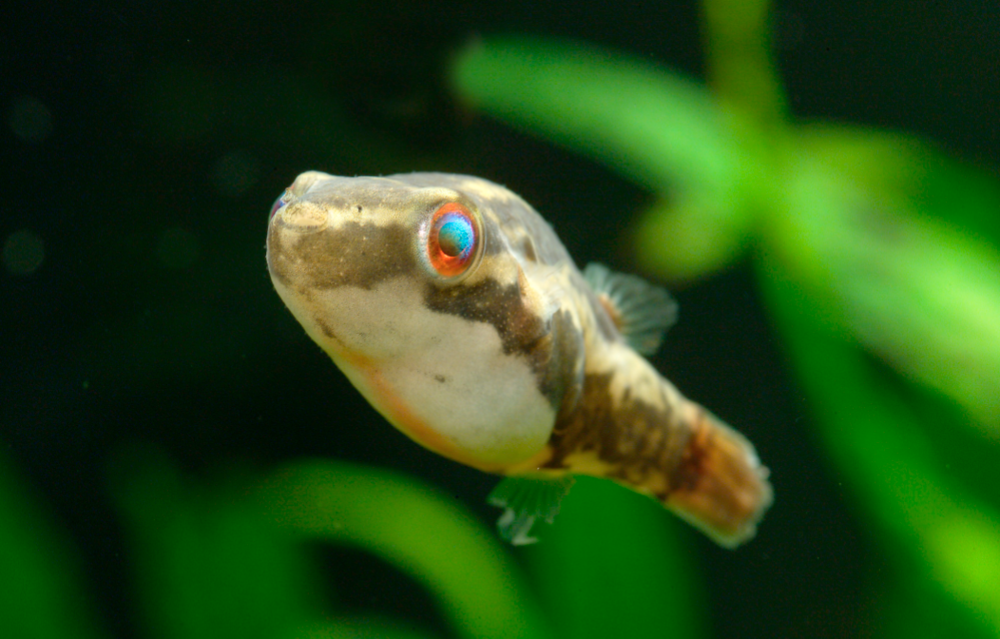 The Red tailed puffer, Carinotetraodon irrubesco, on the other hand, offered some breeding opportunities. They are small bodied and good looking, and while they are twilight fish, the lighting could be timed to provide them with some moonlight when I’m around. Their big issue is aggression. C. irrubesco is not so bad, but it belongs to a group of four ‘red-eyed’ species, which all look quite similar and are often mislabelled in the trade. So there is a good chance that the relatively peaceful Red tailed puffer you order will be a more aggressive species, such as C. lorteti. Kept as a lone specimen in its own tank, this isn’t a problem, but housing more — especially two males — will lead to disaster. I had no store nearby which stocked these fish and I didn’t want to risk mail order for the above reasons.

So I decided on the third species: the tiny Dwarf puffer, Carinotetraodon travancoricus.

Bloodworm is a firm favourite with these tiny fish. 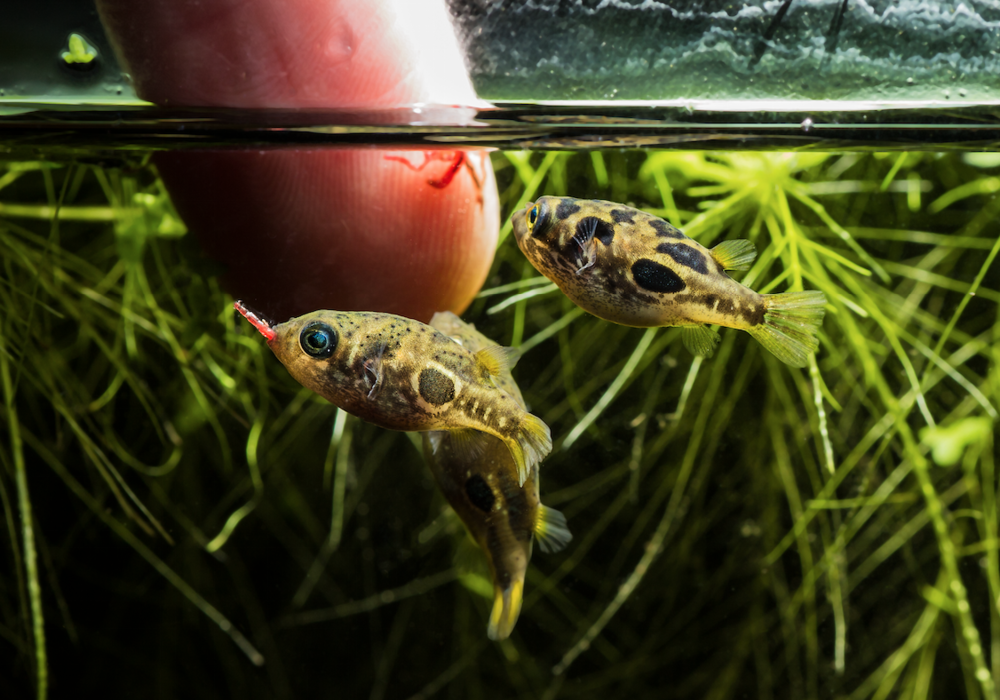 Puffers are sensitive to nitrates, so watch your water quality when keeping these fish.

As they are messy eaters, good filtration is essential. Pufferfish, being scaleless, are also sensitive to high nitrates, so you have to aim for pristine water quality. This can only be achieved with multi-stage filtration, so I decided to add an external filter to help out the internal filter which came with the Home 80.

With the decoration I tried to mimic the puffers’ natural habitat. I didn’t want a biotope, just something resembling a slow moving river. I used JBL Sansibar black sand as a substrate to imitate the sandy bottom. I decided to go with this dark sand to enhance fish colouration.

As the rivers are full of fallen tree branches I looked into my ‘soaking barrel’ (when I collect any wood for aquarium use I keep it there for several weeks) and picked up a selection of wood. These pieces were randomly placed in the tank, creating a nice riverbank effect A large Bolbitis African water fern was added as a focal point along with smaller Java fern and clumps of Monosolenium (liverwort) attached to the ‘roots’.

With the wood and plants, I created an underwater labyrinth, breaking up the line of sight and providing well separated areas for discovering or retreating. As pufferfish are quite inquisitive, they love to investigate everything. Therefore, some floating Water lettuce, Pistia stratiotes, was also added to provide shade as well as an interesting root structure. The decor was completed with a handful of dry oak leaves pre-soaked in boiling water to remove as much tannin as possible.

Gabor's puffer set-up included plenty of wood and leaves to provide retreats and break up the line of sight.

When the tank was properly cycled I added the first residents: a group of Kuhli loaches (Pangio sp.) Although it’s generally recommended to keep Dwarf puffers in species tanks I decided a ‘cleaner crew’ would help me remove the food bits these fish are so good at spitting out. The theory works well in practice, as the loaches happily collect the morsels dropped by the puffers and then retreat into their hiding places without getting nipped. A pair of Otocinclus was also added to keep the wood algae free. 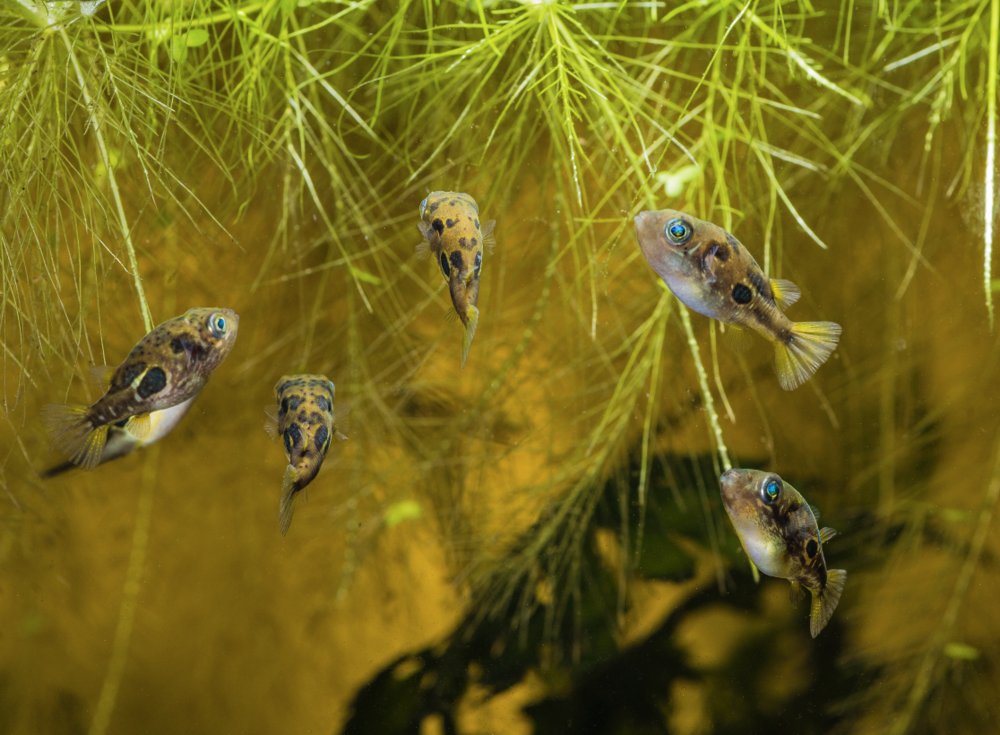 About a week after adding the loaches and the Otos, ten young Dwarf puffers were introduced. At first they were a bit shy, but quickly learned that the food came from me, so whenever I passed their tank the whole shoal rushed to the front glass, begging for something to eat. The problem was that this ‘something’ meant only two things: bloodworm or a snail. I’ve tried a range of frozen foods, but only a couple of the puffers tasted the Artemia, Daphnia or Mysis shrimp offered —spitting them out again in disgust.

I have heard of Dwarf puffers accepting a range of foods, but my lot seem very conservative, not eating anything new. The only exception was live blackworm, which caused a feeding frenzy when I dropped a dozen into their aquarium — good news, as it should help me to bring my puffers into breeding condition. 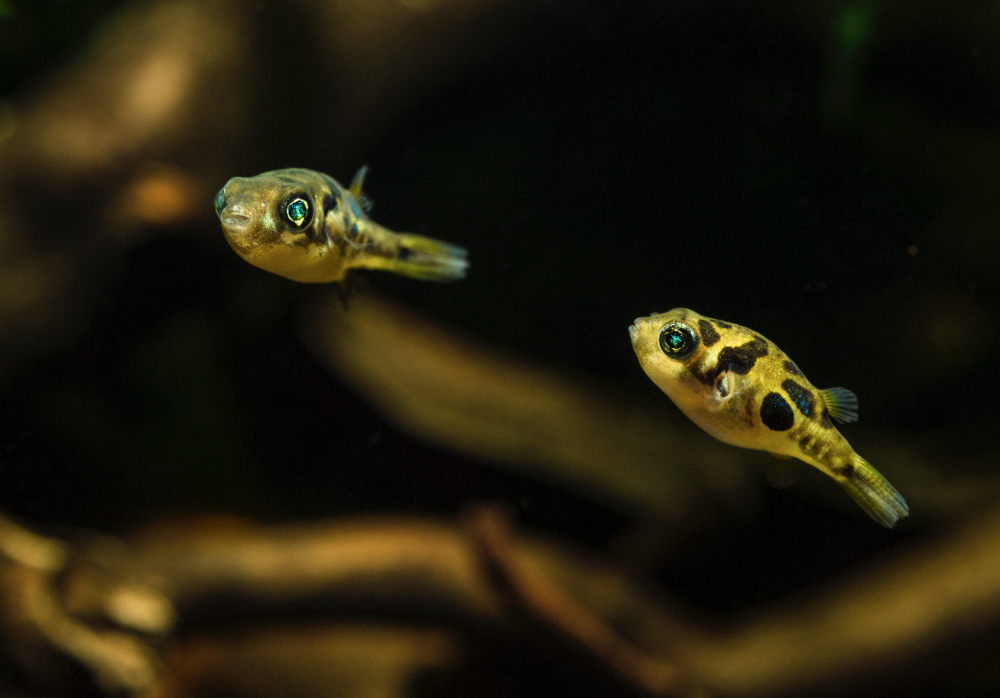 Take things a step further and try your hand at breeding these pea-sized fish.

How to breed your puffers

The Dwarf puffer is one of very few species in the family which can be bred in aquaria — there are even records of them doing so in a community set-up. Although my fish are too young to breed yet, hopefully I’ll be able to persuade them to do so in the near future.

Fortunately, I know someone who has successfully spawned them on several occasions, and my plan is to follow his guidance as described below.

You’ll need at least a pair of healthy and well conditioned puffers. Separating the genders is impossible at a young age, so it is always advisable to start your breeding project by buying at least 6-8 youngsters. As they grow you will see some of them separating from the group and guarding a particular area within the tank. Most of these separatists are young males, but you can only be sure when they develop a dark band on their undersides. This well visible sign is the key indicator of their gender.

Mature females carrying ripe eggs have continuously rounded bellies (not only after feeding). When they are ready to spawn their visits to the bachelors’ yards will be more frequent. Dwarf puffers don’t build a nest, but they do need soft and fine leaved plants for spawning. If you have bunches of Java moss in your tank the dominant male is sure to take residence above them. Once an interested lady enters the love nest, males show their best sides to persuade her to lay the eggs. These fish are egg scatterers, so don’t lay their eggs in an orderly fashion as cichlids do. The eggs are relatively small and not sticky, so they will fall through the fine leaves to the substrate.

After spawning, the male will guard the area, but not the eggs. In fact the parents may even consume them. If the spawning happens in the community tank — even in the case of a pufferfish only aquarium — the eggs and the newly hatched fry have almost no chance of survival, although there are anecdotes of tiny puffers arising from jungles of mosses. If you want to raise the fry, there are two options available: you can remove all the adults from the tank or try to syphon out the eggs (if you can spot them).

Neither of these options are very practical or efficient, so setting up a separate spawning aquarium is best. It doesn’t have to be big, a 45 x 30 x 30cm tank will suffice. The decor can also be very simple, consisting only a double fist-sized clumps of Java moss. Substrate is not necessary, as the bare bottom will make cleaning and spotting the eggs much easier. For filtration an air-driven large sponge filter is perfect. Fill up the tank with 6.5–7pH, 5–8°H fresh water and set the heater to 25–27°C.

For the best result it’s best to separate the males and females for at least a fortnight before attempting to breed them. Condition them with frequent feeding of varied live and frozen fare (or whatever they accept as food). Once they are ready, move one male with up to three females to the well cycled breeding tank. The male should soon realise the potential of the situation and begin chasing the females (remove any that are being over-bullied).

Usually the separation of the boys from the girls increases desire, so spawning occurs within a week. For those who have bred egg scatterers like tetras, danios and barbs, the process may look familiar, but it may take several attempts to persuade Dwarf puffers to spawn, so don’t give up if you’re unsuccessful the first couple of times.

Once the eggs are laid, remove the adults and get ready for the hatching. You don’t need to rush, as it takes about 4–5 days. The fry rest on the bottom for at least another five days before going after food. As they are very tiny only the finest food will do, so get prepared with some Paramecia and infusoria, along with microworms. After a couple of days you can try some newly hatched brine shrimp. When the juveniles’ bellies turn to orange, indicating the consumption of a healthy dose of baby Artemia, you should have no further issues with raising them. Just keep up the frequent water changes and soon you can pass the excess fish on to friends so that they too can share the joys of being a pufferfish keeper!