How to set up an Amazon themed aquarium 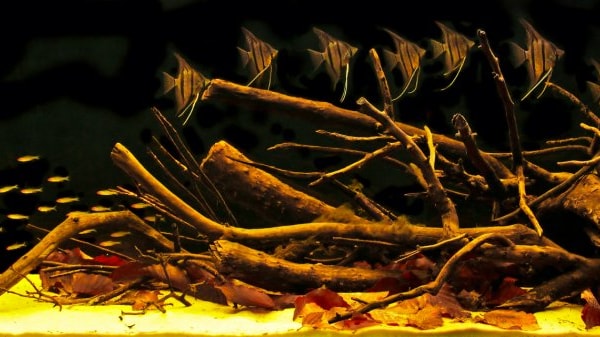 George Farmer sets up another smash hit of an Amazonian biotope tank - this time recreating the life and dÃ©cor of the Rio Nanay.

My fully planted jungle aquascape featured in PFK a few months back kept me busy pruning and thinning out plants – sometimes daily. So when commissioned to set up the same tank with an Amazon biotope I was almost relieved!

The Amazon measures more than 6000km/3730 miles and has many tributaries, so choosing an individual biotope to replicate isn’t easy. Some believe the waters may be home to more than 5,000 species of fish and I deliberated for weeks over stocking. I would choose the fish, then design the aquarium layout appropriately.

I usually select fish based on their size, colour and behaviour, including their height to length ratio to suit my tank. In my case the aquarium is much longer than it is tall, at 120 x 45cm / 48 x 18”, so I would usually choose some longer, slender fish.

However, at The Waterzoo in Peterborough I was captivated by some stunning angelfish. I had seen these before, often labeled Peruvian angelfish and Peruvian altums, and wanted them — even though they are not my ideal choice for the tank’s dimensions. 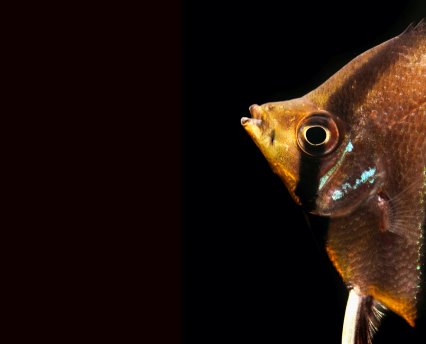 Heiko Bleher confirmed they were a wild Pterophyllum scalare from Peru and advised me about décor and suitable tank mates. The shop manager then said they were in fact P. scalare ‘Rio Nanay’, and he assured me they were indeed caught from that waterway.  This was brilliant news, as there was plenty of information about them on the Internet.

Altum they are not! Despite being labeled as Peruvian altums at some retailers, the fish I bought are definitely P. scalare, although it ‘s perhaps understandable why they are called altum.  With their delicate tall-bodied shape and distinctive notched forehead profile they do look similar.

P. scalare ‘Rio Nanay’ is unique to its namesake river, but there’s some debate about its origin.

In the 1970s a fish exporter’s facility was flooded and all the fish, including thousands of Discus, were released into the Nanay. In the 1980s collectors began catching Discus descended from this accidental introduction. Some believe that this species does not originate from the Rio Nanay and that this distinct strain of scalare may have reached the river by the same release.

This is backed up by the fact that scalare usually avoid the very acidic blackwater that’s found in the Nanay.

Some experts believe that what we call scalare might be a number of different but similar species.  This might be possible, as scalare is found from Peru, in eastern South America, all the way to Belem in the west and in many Amazonian tributaries. 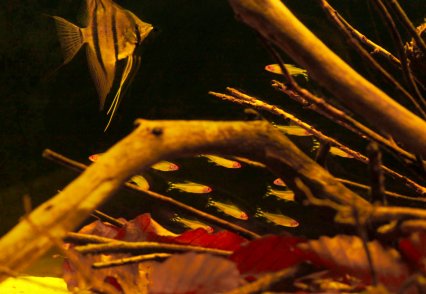 After speaking to Heiko Bleher, my aquascaping plans were confirmed as needing plenty of wood, pale sand and some leaf litter.

Aquascaping a larger tank using relatively few materials can be a challenge. With biotope aquascaping the trick is to make it look natural and not too contrived, yet at the same time it needs to look appealing.

One or two pieces of wood wouldn’t work in this size of tank, looking too simple and unnatural. I borrowed a lovely large piece of Sumatra wood from PFK editor Jeremy Gay to form the backbone of the layout. Smaller pieces were then added strategically around the large piece, taking care to create balance.

I took several days to come up with the final result, as every time I looked at it there was something I wasn’t particularly happy with.  With no plants to disguise or detract attention it can be tough to get a hardscape-only aquascape to look good.

A few months previously I picked up some fallen copper beech leaves from my local park and soaked them for a few days to ensure they would sink after adding water.

I then deliberately left open sand to the left of the aquarium as it provides a nice balance between open and full spaces.

Heiko confirmed that the waters of the Rio Nanay were stained with tannins, so I added tannins via Indian almond leaf sachets.  These are like giant tea bags full of shredded catappa leaves. I placed three sachets in a jug of boiling water, left to stew for 24 hours, then added the contents into the aquarium water.

The effect looks great, adding a really natural looking blackwater effect, but not enough to spoil the view. I did try to source some genuine wood and leaves from the Amazon, but was unsuccessful. 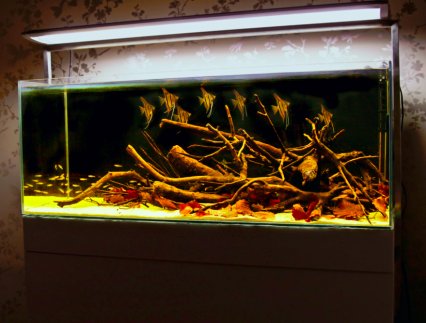 How to set up a Rio Nanay aquarium

1. I’m using a 240 l/53 gal aquarium measuring 120 x 45 x 45cm/ 48x18x18”.  It’s braceless and rimless, making it ideal for aquascaping from which décor and plants can protrude from the surface. An overtank luminaire is used to provide the lighting and a black background is fitted, helping to hide equipment.

2. A 15kg bag of play sand is then added. This is an inexpensive substrate and readily available from many shops. It doesn’t require pre-rinsing, is inert and the colour and texture is similar to the substrate found in the Rio Nanay. Only a thin layer is going to be necessary as I’m not adding plants.

3. A large piece of Sumatra wood is added. Thought is given to its position along the length of the tank, so some open sand is provided to the left.  The wood is placed to look aesthetically balanced with the branches pointing in a way that leads the eye across the tank.

4. More wood is added, keeping in mind how it looks against the original piece.  Although in nature the wood will be more randomly placed, I like to use some compositional aids to create a visually pleasing aquascape. I feel biotope aquariums don’t have to be ugly!

5. The final pieces of wood are added. These are smaller bits of Sumatra, adding texture to the layout. The individual ones are interlocked and I’ve experimented to achieve the desired effect. Pre-soaked copper beech leaves are added. I enlisted the help of fellow aquascaper James Starr-Marshall during this process.

6. I am using RO here as the water in the Rio Nanay is soft and acidic. The angelfish added later are wild-caught and had been kept in similar conditions in the shop. I use an RO unit, which is relatively inexpensive and ideal for creating softwater set-ups in which you can control mineral content.

7. The aquarium is filled, but some wood has not been waterlogged enough to sink, so I add a large rock. The filter is switched on and heater is set to 28°C/ 82°F. The tank is fishlessly cycled and over the next two weeks I fiddle with the wood until totally happy with the layout.

8. Once ammonia and nitrite are undetectable using test kits I acclimatise and add the seven wild-caught Pterophyllum scalare ‘Rio Nanay’ and 30 Petitella georgiae. They are initially quite skittish but after 24 hours settle and feed on a selection of high-quality dry and frozen foods. 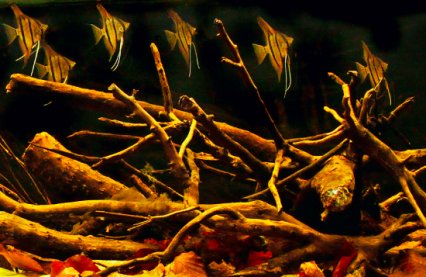 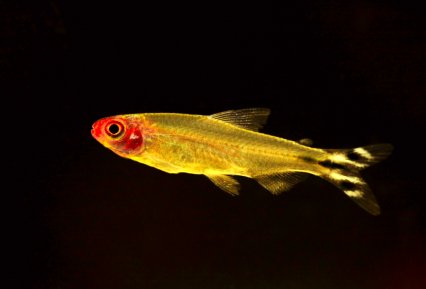 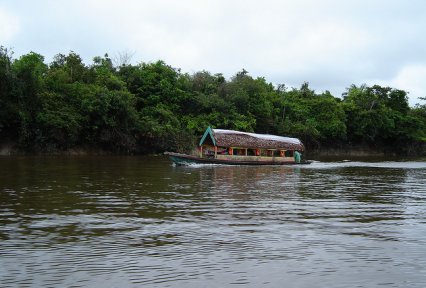 What’s the Rio Nanay like? (picture by exedu, Creative Commons)

The Rio Nanay is 3.5km/2.2 miles from the city of Iquitos and one of the tributaries of the Amazon. It‘s a blackwater river that’s surrounded by forest.

In the rainy season it bursts its banks and floods the adjacent forests, causing trees to collapse into the water.

Its average temperature is 28°C/82°F, pH is about 6 and the conductivity 25-50µS in the dry season. In the rainy season, conductivity drops to 15µS. Flow rate depends on the season as well as the depth, which is usually about 5m/16’.

It contains hundreds of species of fish popular in the hobby, most notably probably Symphysodon aequifasciata, the Green Discus, a result of accidental introduction.  There are a few Echinodorus spp. but these are not commonly seen. 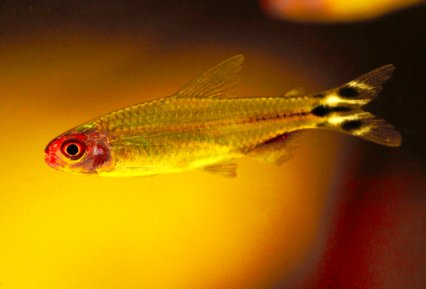 There are three species of what’s commonly known as the Rummynose tetra — Hemmigrammus bleheri, H. rhodostomus and Petitella georgiae — and Heiko said that only the latter are found with my chosen angelfish.

My local shop had a tank full of rummynoses, but labeled H. bleheri.  However, on close inspection, none had their red coloration running past their gill plates.

Black backgrounds are ideal for most aquascapes. Much equipment is black, so it becomes camouflaged. Colours contrast well against black and it helps to hide algae that may grow on the glass.

When aquascaping it’s best to place the décor in the tank before adding water. This way you can change the layout many times without messing up the substrate or disturbing the fish.