How to set up a Tanganyikan cichlid aquarium It look the influence of an article published in his own magazine to prompt editor Jeremy Gay to set up a mini Rift Lake in his lounge.

I’ve long been a fan of African cichlids, but after reading Ad Konings’ excellent article on the fish of Pemba in Lake Tanganyika in September’s PFK I was setting up a Tanganyikan biotope within days!

From those inspirational words I read that this place is like a freshwater reef — and if any readers are undecided about going marine and don’t want the hassle of salt and supplements then think seriously about a Tanganyika tank instead.

There’s something about East Africa’s Rift Lake Valley that appeals to me on so many levels. Lakes Malawi and Tanganyika were forged from the earth’s crust as tectonic plates moved and tore apart, forming a split in the land hundreds of miles long.

In addition to that amazing formation other facts about Tanganyika also amaze me — like it being four miles deep, with three miles of that being mud. Deep sand bed envy anyone?

It also has mighty rivers that used to flow into it, but now flow out — and along with the 250 or so endemic cichlid species which evolved to fill the various niches the freshwater lake provided, there are also freshwater crabs, sponges and jellyfish!

So apart from invert similarity and great depth, the lake is quite oceanic in other ways.

Some cichlids could be considered goby like, with others living at extreme depth and needing days of decompression to be brought to the surface without being damaged.

The vast open waters of this 420-mile lake are also inhabited by pelagic, sardine-like fish which make up part of the valuable food chain for predatory birds, larger predatory fish and the substantial human population living along its shoreline.

Having that tremendous surface area and volume, it’s fitting that this lake has large waves and that’s a feature we could tap into with marine equipment. 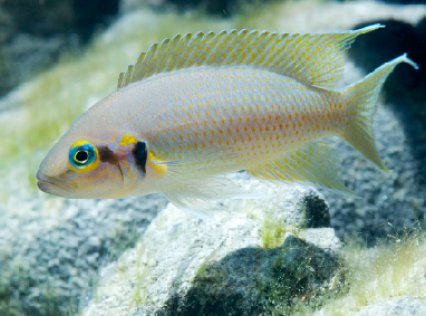 There’s more than 100 species of Lake Tanganyika cichlid available, so you might be wondering where and how to start stocking.

I advise breaking down the species into groups according to their requirements. Tanganyikans loosely divide into rock-dwelling Lamprologines like Neolamprologus pulcher (pictured above) rock-dwelling, algae- eating mouthbrooders like Tropheus, deepwater predators like Frontosa, sand dwellers like Xenotilapia and open water species like Cyprichromis, the sardine cichlids.

The Juwel Rio 240 I’m using is too small for Frontosa, so they are out of the equation. I don’t want the hassle of the dietary control that comes with Tropheus, so they are ignored too. Because of the rockwork, there isn’t a sufficiently large and open enough expanse of sand, so sand dwellers are also out.

This leaves me with the Lamprologines, which have loads going for them — including small size, behaviour, hardiness, breeding potential and ease of keeping — and maybe some Cyprichromis sardine cichlids for the open water above the rocks. Shell dwellers are also Lamprologines, but their "rocks" are shells, so can be mixed too. 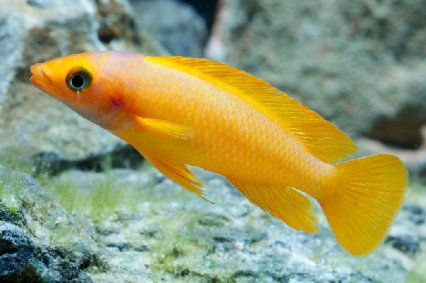 Having decided on rock and shell dwelling Lamprologines they should then be subdivided into similar groups to help you stock them correctly and with the minimum of fuss.

There will always be initial conflict over territory, although by sticking to one pair of each of my recommendations they are less likely to conflict with each other over territory or hybridise than, say, two species of Julie (Julidochromis) in the same tank. 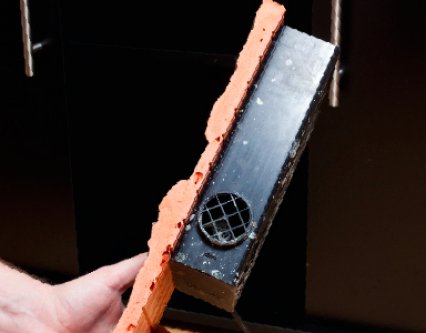 As a marine and tropical fishkeeper I can’t help but try to further develop the ocean-like conditions of Lake Tanganyika using marine technology.

For the blue, deep effect use blue marine lighting, and for the waves how about a wavemaker? I hooked up my Tunze Nano Wavebox and hid it using some Juwel Filter Cover stuck on the outside and created waves.

It looks brilliant, and you could even take it one step further by creating the wave-washed shoreline with strong wave action and by stocking with Goby cichlids, Eretmodus, Spathodus or Tanganicodus. Give it a try!

You can see a video of the finished set-up below:

How to set up your Tanganyikan tank 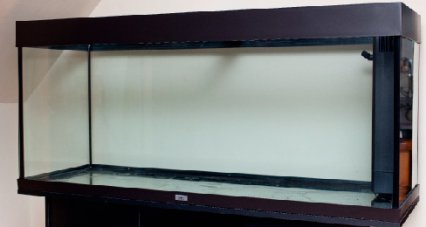 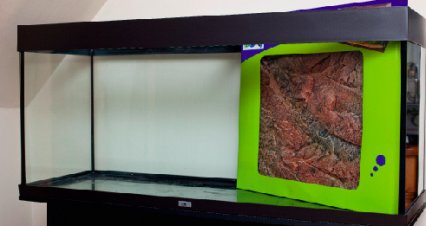 2. To add even greater emphasis to the rocky effect I want to create here  I’m fitting Juwel Cliff Dark backgrounds to the back of the tank and Cliff Dark filter covers. 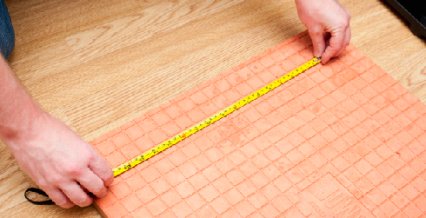 3. Measure the internal height of the tank up to the trim and flip the panels to find an easy to cut grid. Your Juwel retailer can also advise on fitting the panels.

4. Use a Stanley type or craft knife and cut down the straight lines of the grid. This will give you a neat cut and straight edge. As always, keep fingers curled away from blades. 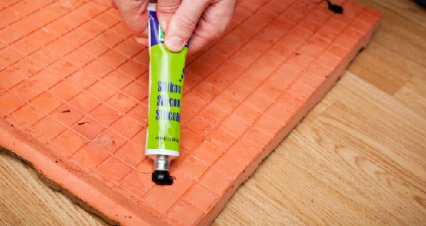 5. Use silicone to stick the panels onto the rear tank glass. A liberal blob in each corner is all you will need. Then leave for 24 hours to cure before filling with water. 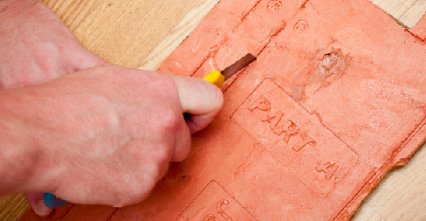 6. Repeat with the filter cover. These additions are designed for Juwel filters with cut-outs in the right places for water inlets and a curvy edge on one side to help them blend in. 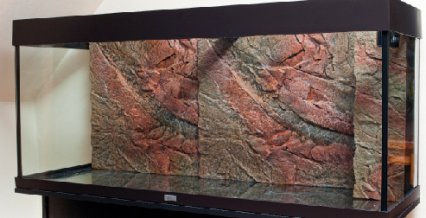 7. Twenty-four hours later the rear panels and filter cover are stuck and ready for filling. Don’t worry if you need to remove them as they prize off without damaging or marking the tank. 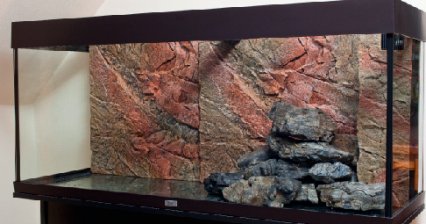 8. I’ve started a rock pile on the right using limestone rocks. Their colour and markings add to the ‘ancient’ lake effect. The uppermost rock is the focal point, positioned two-thirds along the tank. 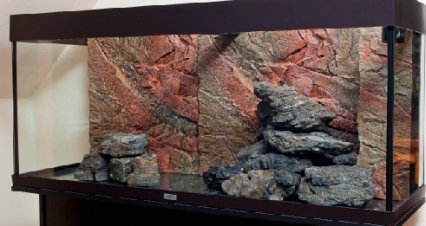 9. More rocks make up a smaller pile on the left hand side. I may rearrange these later, but they complement the larger pile on the right and will provide extra territory. 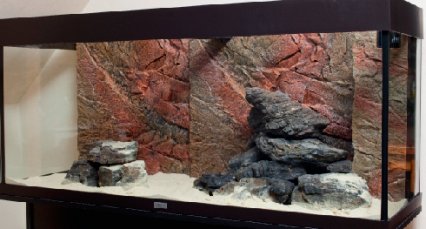 10. Silver sand is then added in a thin layer on the bottom. If you have soft tapwater you could replace this with a calcaereous substrate that will aid buffering. 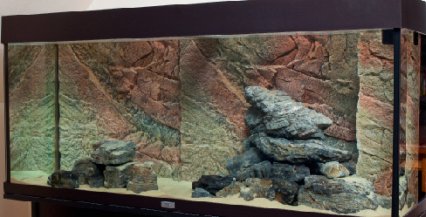 11. I’ve filled with tapwater and dechlorinated. Filter and heater are plugged in and maturation begins. I’ve filled the Cirax chamber with mature biological media to make it instantly ready for fish.

12. Weeks later the tank is ready for fish and Juwel Hi-Lite Marine and Blue T5 tubes give it a deep water look. Some fish are already in and I’m really pleased with the effect.

Tank and cabinet: Rio 240, including lighting, heating and filtration — £450