How to set up a Taiwanese biotope aquarium Jeremy Gay creates a natural river biotope with all the ingredients from just one country. He explains how in this step-by-step guide.

What springs to mind when someone talks about an Asian biotope? Gouramis, rasboras, loaches? Unfortunately, and as with the Amazon, the term Asian biotope can become a bit clichéd, whereby a load of fish and plants from a very large area are placed together in the same tank.

Well not any more, as, thanks to exporters, specialist importers and the Internet, we can now be much more specific about our biotopes.

You can set up by starting with the fish, instead of the other way round. That way you can select the fish you want, quarantine and condition them and build the biotope around them.

This Taiwanese biotope came about from the sudden availability of the Rosy bitterling (Rhodeus ocellatus ocellatus) last year. We instantly took a shine to them and were soon researching and collecting other species from Taiwan — including gobies, shrimp, snails and even plants.

Avoid a 'catch all'

Even when you have researched all the possibilities and found the suppliers of your chosen fish, next sub-divide them into suitable habitats.

For example, most Taiwanese gobies available are amphidromous species, meaning their larvae are washed out to sea to develop. Adults then make journeys into fast-flowing freshwater rivers to breed again. 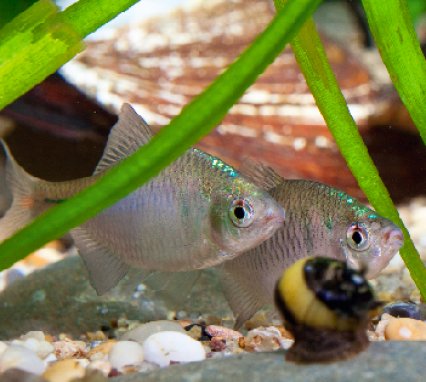 Yet the bitterling, the subject of this biotope, are known to inhabit quieter waters further inland.

The decision was therefore made not to include most of the gobies, as only a very large aquarium could include suitably fast and slow water in the same tank. However, a goby-only habitat could be great too!

In addition, when it comes to aquascaping and stocking, less is more. By using few species, but a decent number of each, you can provide a more natural display.

What Asian biotope would be complete without all the great little invertebrates now common in the hobby?

What’s more, the two species selected will also do a great job cleaning up the tank.

Few shrimp are more widespread in the hobby than the now famed algae eating Caridina multidentata and, great for us and our theme, they come from Taiwan, among other countries.

We have also included an interesting little Nerite snail called Clithon sowerbyana. They will be perfect for the biotope we created.

We long-term tested them with Vallisneria too and found that they either don’t eat the plants, or, if they do, at a rate slower than which the vallis regrows. 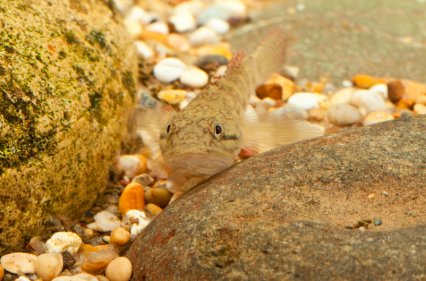 Every biotope needs a theme and this can be replicated in décor. Bitterlings are well known for their unusual method of reproduction involving mussels and Rosy bitterlings are no different.

Unfortunately live mussels don’t last long in aquaria as they starve, so we included some shells of Swan mussels that died in an outside pond years ago.

Collate your research and you’ll be able to collect décor accordingly.

We tried to replicate a river scene so collected several types of inert substrate to make up the bed and round pebbles and twigs to replicate the bank.

From reading up, and from our own keeping, we soon recognised that the bitterling are a shy species that inhabit the shady, slack water close to the riverbank. They also preferred to live among plants.

We therefore endeavoured to create a bank effect, sloping the substrate towards a rear corner and graduating the grade of the substrate particle size from very large pebbles (the pretend fast flowing part) through pea gravel, grit, to fine sand (the bank.)

The effect seemed to work and also provided a deep bed for planting the vallis. Then, by providing what we thought was suitable habitat, the bitterling soon became riverbank residents, spending most of the time in our shady bank section.

The amorous males made occasional forays to show off their beautiful colours in the open water.

Is a Taiwanese biotope for you?

Although subtly coloured, our Taiwanese biotope has received great comments from onlookers in and outside the hobby.

Everyone likes a natural biotope and once the vallis grows in more it should look fairly representative of a natural stream. We didn’t seek to over beautify it or create too much need for maintenance and we definitely achieved that with the vallis growing merrily without any special planting care. It was quick and easy to set up too.

This set-up is also, strictly speaking, temperate, as the livestock naturally inhabit temperatures between 18-24°C/64-75°F. With the average room temperature being around 19°C/66°F, you shouldn’t even need a heater, so this type of biotope saves energy too. Fish plus natural habitat equals happy fish and happy fishkeeper! 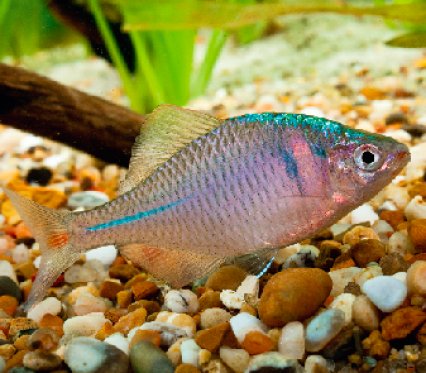 Notes: A really nice little bitterling that you can legally keep in the UK without a licence. Males become colourful, sporting iridescent blue and turquoise over a red and silver body.

They are shy and nervous fish so keep in a group. 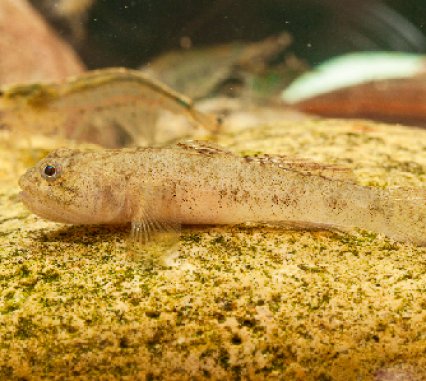 Notes: An amphidromous fish, coming from the sea to breed in freshwater and so suited to freshwater, brackish and marine tanks.  We long-term tested ours in freshwater to check suitability for this set-up. Males have a bigger head and larger dorsal fin. 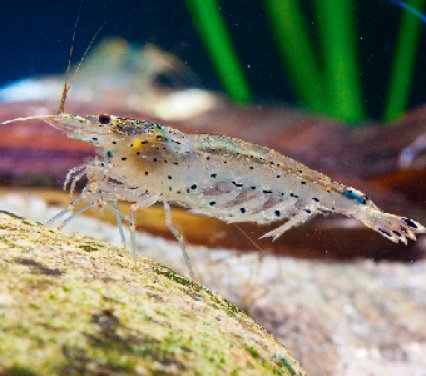 Notes: The world’s most popular freshwater aquarium shrimp. Their larvae are thought to be washed downstream into the sea to develop, so although large females may release eggs in your aquarium, they won’t develop without special care. 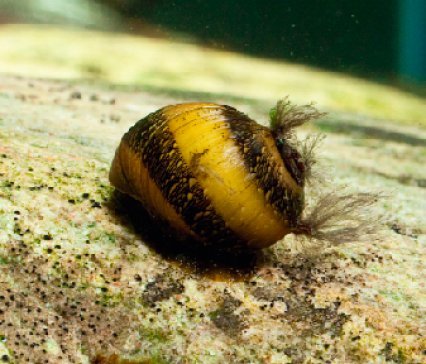 Notes: When you buy these snails, ensure they are stuck to something in the shop. Place them straight onto a rock when you get them home. Snails that are upside-down are dead or dying. 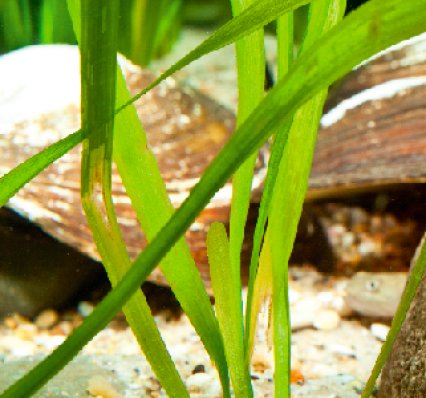 Notes: Vallisneria needs hard water to thrive and can grow quite happily without fertilisers or CO2. Its scientific name is confusing — the flower spikes are spiralled, not the leaves. The classic underwater grass, Vallisneria is widely available and always sets the scene.

How to set up your Taiwanese biotope tank 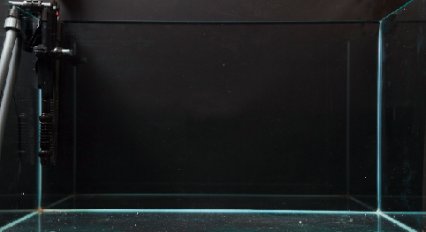 Our tank is 80 x 45 x 45cm/32 x 18 x 18” — large enough for a group of bitterlings and nice and wide for aquascaping. We used a black background and fitted the external filter pipes and heater discretely in the rear corner. 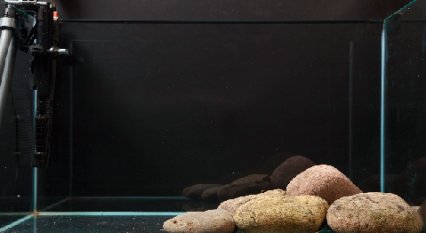 To replicate the main river channel we placed some large pebbles in one of the front corners. The pebbles are inert and will give the illusion of a riverbed. Smaller pebbles are placed behind them, graduating into smaller gravel. 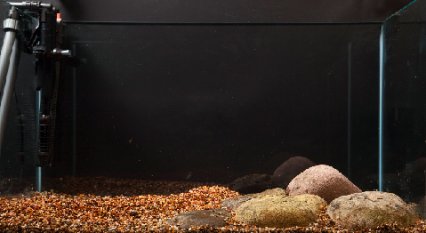 Pea gravel is next in as it suits the look we want, being clean and rounded. We wash it then place a layer across the bottom of the tank. We then place some more pea gravel in a band going towards the rear corner. 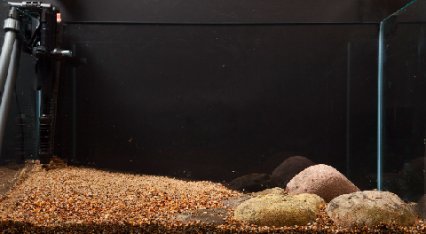 Smaller in size than pea gravel, some grit is next. The idea is that the grain size should be getting smaller and we are raising height to start to create our riverbank effect. Again make sure everything is pre-washed and inert. 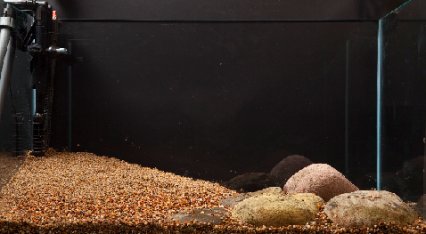 5. Getting a banking effect

Another layer of the grit goes down and this time you can see developing the banking effect that we are trying to achieve. Place it further to the side than the last lot and deeper still to create a mound. 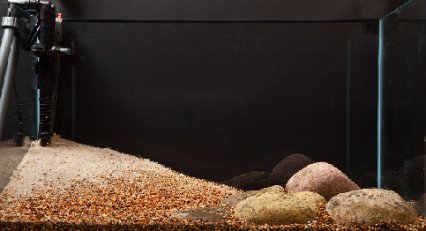 Fine sand is our last layer. In nature mud would go down after that, though in an aquarium this is not practical. Again bank it up in height and push the mound further into the corner so it rises up several inches. 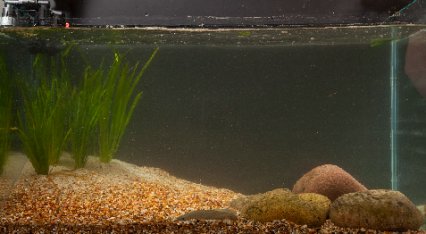 Vallisneria is the only plant we are using in this biotope and the tank needs to be at least half filled with water to hold up the vallis for planting. To avoid shock to the plants, bring the water to room temperature and dechlorinate first. 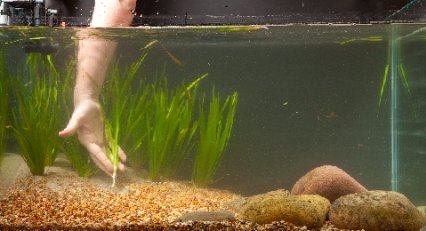 Vallisneria usually comes to us in bunches, wrapped and weighted down with a strip of metal. Best for the plant and to create best value for money, separate individual plants from the bunch, space them out and push them into the substrate using your hand or tweezers. 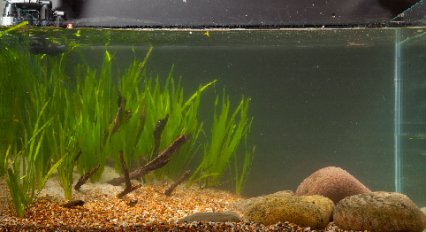 To further accentuate our effect we inserted thin bogwood branches into the banked-up substrate. We obtained these after purchasing a spindly piece of bogwood and snapping the thinnest bits off. Stick them into the sand to replicate tree roots and submerged branches. 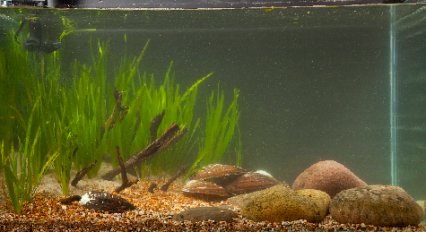 To add to the bitterling theme we utilise our empty Swan mussel shells. Genuine Taiwanese mussels are available but destined to fare badly, so we used artistic licence and used Swan mussels instead. Bitterling and mussels are the perfect accompaniment. 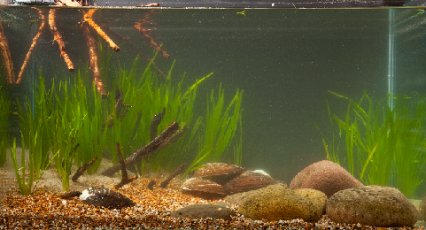 To create shade and replicate overhanging branches we take another piece of spindly bogwood and place it inverted in the rear corner of the set-up with the vallis. We simply hook one of the branches onto the tank rim to secure it in place.

Plug in the heater and filter, and mature the tank before adding the fish. Set the heater to low, so it only comes on in cold periods. Set the lighting to come on for ten hours per day and remove any dead Vallisneria leaves from the aquarium.