How to set up a paludarium 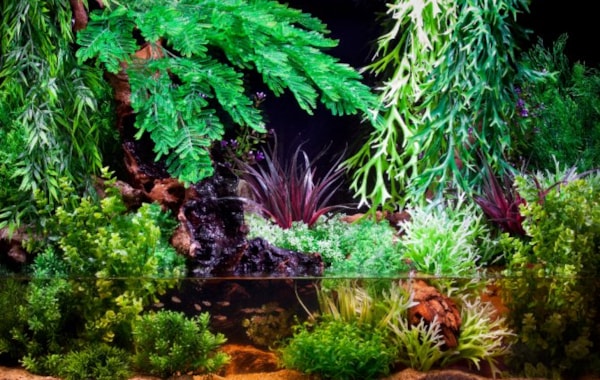 Wow, he’s done it again! That’s what I thought when I first laid eyes on Dean Barratt’s latest creation.

Love or loathe plastic plants, this guy really knows how to use them — and since he’s been regularly creating such tanks with instant impact yet massive longevity, I’ve become a massive fan.

When Rosewood’s Dean created his first tank for us — a 1.2m/4’ aquarium furnished with Sydeco plastic plants as featured in our March 2011 issue — everyone loved it. As a result I gave him an open invitation to return with more ideas.

His next tank is a paludarium, again using plants from the Sydeco range. This is breaking new ground as far as I’m concerned, as the only decent paludariums I have seen had live plants in them. Those that didn’t looked pretty naff.

I think you’ll agree that this set-up looks superb! 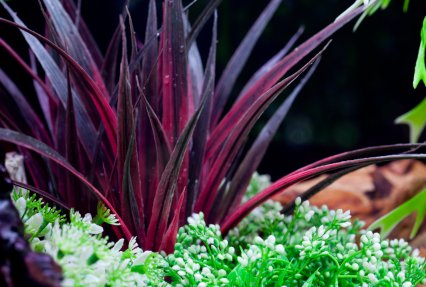 This isn’t a sales pitch but plastic plants do have many advantages, especially for those who can’t grow live plants for various reasons, or for those who simply don’t want or can’t have them.

Advantage number one: Plastic plants are not light dependent and won’t ever need feeding, any pruning or replanting.

Advantage number two: You can keep them with fish that would usually eat live plants, like large cichlids or Silver dollars.

Advantage number three: They last for ever, so get them looking good from day one and, bar the odd, thorough clean, they will keep their shape and looks for as long as you want them to.

Growing live plants in a terrarium or paludarium can be pretty tricky. They need the right humidity and nutrients, and we struggle just to get hold of the range of terrarium plants in the UK that they enjoy in paludarium heartland of Europe, particularly Holland.

With paludariums you get to keep life above the waterline too, so frogs are possible, as are terrapins in large ones with no fish or crabs.

Terrapins or crabs would make a right mess of live plants in no time, yet with plastic a nicely decorated tank is a real possibility.

And what about brackish creatures? Say hello to mudskippers, fiddler crabs, Anableps and archer fish in a natural type environment with perches and over hanging foliage. Yet there’s no die-off due to the salt levels in the water. Are you sold on plastic yet?

So what makes this paludarium look so good? I put it down to a number of factors. Firstly Dean clearly has an eye for design and, like our own George Farmer, references the rule of two-thirds, focal points and how the eye is drawn through his designs.

He has also heavily decorated the tank. In nine out of ten effective displays heavy use of decoration is employed and fish and décor are added and displayed in groups for even greater visual effect.

Dean has also been brave enough to try new things. It takes a leap of faith to buck convention and turn a submerse aquatic plant replica into a rooftop hanging creeper just by hanging it upside down — or make a seaweed replica into a terrestrial fern replica by jutting it from exposed wood and on its side. Experiment with your own décor and it may just pay off!

Then there was the tank itself. Dean talked at length with the PFK team as he wanted a tall tank that would properly complement his design. Several options were rejected as he just didn’t like the look of them and the way they would frame his creation.

He settled on a new design from Maidenhead Aquatics; a 122 x 46 x 76cm/48 x 18 x 30” from its new Phoenix range and in a new colour called Mira Cosa. At 30” tall it allows for a decent water height, yet there’s still two-thirds of the design out of the water — and with that neat black silicone and glossy yet minimalist cabinet design it really looks the business.

Three of us were admiring the tank on the day of the photoshoot and we were all eyeing up that cabinet. I even measured up for one when I got home!  This tank even has an Optiwhite, low iron, ultra clear glass front and with this, and the AquaOak range, Maidenhead’s tank selection is evolving very much for the better. 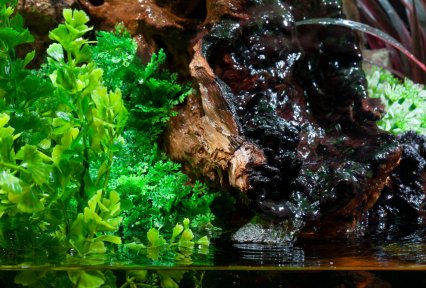 Every paludarium needs a waterfall, and Dean created one very simply but effectively from a single large piece of Mopani wood. The underside becomes a natural waterway, so when placed upside down and fed with water, it all cascades down the grooves in the wood, making a pleasing trickling sound as it goes.

The water feed is simply the outlet from the external filter, so the filter still works in exactly the same way as if the tank was full — only this time the water takes a far more scenic route back to the fish below.

You can make waterfalls in several ways — just by piling up rocks, wood or both — and if you don’t want to use an external filter you could use a powerhead and some PVC tubing, or an internal power filter on its back, again connected to tubing.

An inline tap may come in handy, as it will allow you to control the water flow and prevent too much splashing. 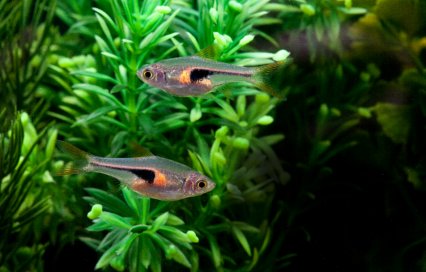 Dean chose a small shoal of Trigonostigma hengeli for this one, Known as Copper harlequin rasboras, they suit the shallow, tannin-stained water and are active yet tightly shoaling swimmers. Perfect for what he wanted.

Other options included Cherry barbs or even platies. As long as the fish are small and in single species groups it should all look visually appealing.

It goes without saying that, as with any aquarium, the filter should be properly mature before adding any fish. 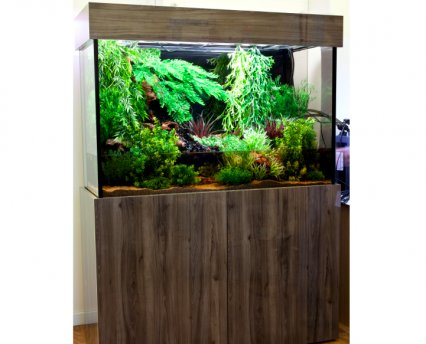 How Dean set up his paludarium 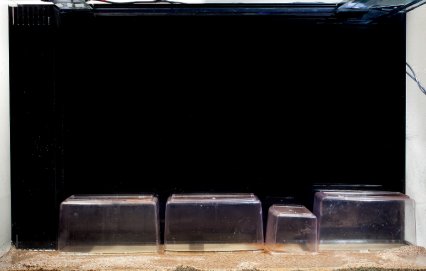 1. The first stage and one of the cleverest bits! Dean uses small plastic tanks, placed upside down, to create a raised area. 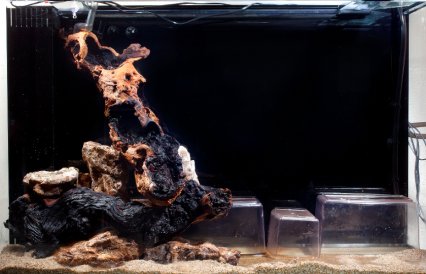 2. Large mopani wood is strategically placed to create the waterfall, with petrified wood placed around it. 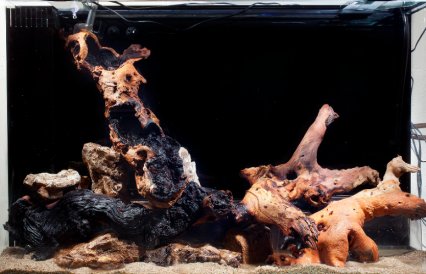 3. More wood goes down, hiding the tanks behind. The hardscape is now all in place. 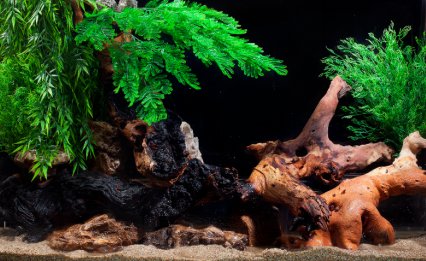 4. Large plastic plants are added. One is hung upside, two more are bunched together and jut out. A third rises up in the other corner. 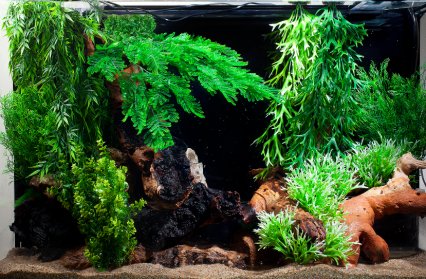 5. More plants are hung upside down, and smaller, textured plants start to fill the midground. Plant in groups for effect. 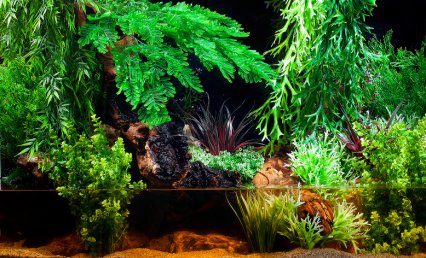 6. Water is added along with more plants to fill out the design. Tannins from the wood stain the water, but it looks good.

Check out our video of the finished set-up.

See Dean's original article for PFK: How to set up an aquarium with plastic plants.