How and why you should maintain water quality during summer months 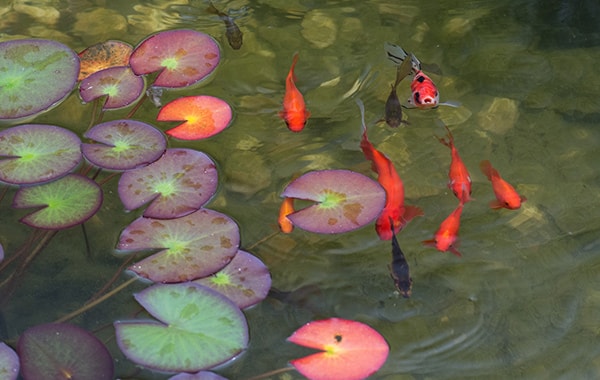 Summer can be an enjoyable time for pondkeepers. It’s an opportunity to relax in the garden while your fish are more active. However, there are several unique problems that can arise during the warmer months which we’ll explore in this feature.

One of the properties of water is that as it cools down it can hold more dissolved oxygen. For example, a sample of freshwater at 5C is saturated with oxygen at 12.76 mg/l. However, a sample of water at 25C is saturated when it holds only 8.24 mg/L of oxygen. It is possible for the water to hold more oxygen and become supersaturated, but this is unstable and the water will eventually return to a stable saturation point or below.

What are the implications of this for our pond? Firstly, there is less oxygen available for the fish when the water is warmer but, to exacerbate the situation further, the fish become more active at higher temperatures and therefore have a greater demand for oxygen. For every 10⁰C rise in temperature the metabolic rate of the fish roughly doubles.

And it’s not only the fish that will have a greater oxygen demand. The activity of the filter bacteria is also dictated by temperature as the warmer the water the faster they metabolise. Couple this with a greater production of ammonia from the fish and the overall consumption of oxygen by living organisms in the pond is elevated, whilst the amount of oxygen available is at an annual low.

To manage this summer oxygen paradox, it is essential to ensure water is thoroughly oxygenated over the summer months. The best way to do this is to use a Tetra Test O2 kit or electronic probe to analyse the oxygen level and make certain it remains at a value that can meet the requirements of fish and filter bacteria.

Although regular testing is useful, thorough aeration of the water by using air stones, venturi’s, waterfalls and fountains is essential. During especially hot and humid days, the dissolved oxygen level can be at its lowest, and extra care is needed at this time. Always make sure you have hit a minimum of 60% saturation but strive for a value nearer to 80%. The closer biofiltration chambers are to saturation with dissolved oxygen the better they function.

What to do with troublesome algae

Another problem that can arise in ponds in the summer are blooms of unsightly blanket weed and green water algae. These primitive plants have basic requirements, including dissolved nutrients such as nitrate and phosphate, and sunlight to allow them to photosynthesise. In many ponds algae becomes a real problem as the sunlight reaches the correct intensity and shines for a sufficiently long period of time to allow algal growth to proceed at a great rate.

Apart from looking unsightly, algae can cause numerous water quality-based problems. On a basic level algal cells and strands of blanket weed soon clog filtration systems leading to additional maintenance to keep the life-support-system of the pond running efficiently.

Down at a chemical level the pond water is being profoundly influenced by the growth of algae. The photosynthetic processes which occurs only in daylight hours, sees the liberation of oxygen and the uptake of carbon dioxide. These processes occur at the same time as the normal respiration of the plant, but there is an overall increase in oxygen and decrease in carbon dioxide in a pond with heavy growths of plant life.

At night photosynthesis stops, but respiration continues leading to a decrease in oxygen levels and increase in carbon dioxide, a trend that continues until sunrise.

What does all this mean for the fish?

Firstly, the oxygen level in the pond will be far from stable. For examples, lakes heavily choked with algal growth have been recorded as fluctuating from a supersaturated 169% down to a low of 39% sat. This instability would cause chronic stress to fish and would need to be remedied.

Another problem is the increase in carbon dioxide at night. The chemistry of carbon dioxide in water is very complex but can generally be considered to lower the pH as it leads to the formation of carbonic acid. Therefore, more carbon dioxide leads to a lower pH.

The pH is held stable by the buffering system or carbonate hardness (KH), in the water. Ponds with a good strong KH (>6 °H) can resist the change in pH for a decent length of time. Remember though that KH can become exhausted and is best replaced by a water change with hard to moderately hard water. If you live in a soft water area of the country, then KH can be raised by placing cockle or oyster shell into the final stage of the filtration system.

In summary, a pond choked with algae is a potentially dangerous environment for fish as well as being unattractive for you as a pond keeper. The action plan involves getting rid of the algae using a product such as Tetra’s AlgoFin, ensuring the oxygen level is not fluctuating by vigorously aerating the water, especially at night and, finally, ensuring the pond is not suffering daily fluctuations in pH by maintaining a good level of KH in the pond water.

But what about aquariums in the heat I hear you say!

The unfortunate property of water holding less oxygen in warmer water also impacts aquaria but for the majority of tanks this should not be an issue.

A tropical tank will be heated to around 25⁰C though in a small urban flat in high summer the room temperature may rise well above this. Measures taken to keep the room at a comfortable temperature will also benefit the fish. Close curtains or blinds to block direct sunlight and leave windows open if possible. Aerate the tank maximally at this time of year and monitor the temperature of water and fish behaviour closely - look out for signs of respiratory distress such as lethargy and gasping at the water surface.

Goldfish in unheated tanks should be able to tolerate water temperatures rising above 25⁰C, but again there will be a need to aerate the tank as much as possible at this time. Temperate tanks containing fishes such as White Cloud Mountain minnows will be less forgiving.

Marine aquarium keepers will need to be especially careful as overheating of their aquaria can be a common problem and fish or invertebrate distress can arise – these tropical marine animals simply cannot tolerate temperatures encountered in some indoor environments in the summer. If room temperatures cannot be kept below 25⁰C in high summer, then an automatic aquarium chiller must be installed, or you need to be ready with icepacks or cooled artificial seawater to manage the temperature manually.