Looking for colourful marines that are neither too big nor too small? Check out Tobacco basslets...

It’s always a thrill to bump into a fish that you associate with aquaria out in the wild, and even the briefest of dalliances can shed new light on the lifestyles of the most common of species. It doesn’t matter how much you think you know about them, away from the whir of the pumps and the confinement of glass walls, you get a tantalising glimpse of another side to the animal, be it a behavioural perspective, habitat preference or simply the fish’s social standing in the reef hierarchy. I’ve been fortune enough to encounter a number of reef aquarium favourites on my travels, but undoubtedly one of my favourites is the Tobacco basslet, Serranus tabacarius.

Hailing from the sub-family Serraninae, within the family Serranidae, the genus Serranus supports approximately 30 species, although the exact number seems open to some debate as individual species appear to be moved or resurrected with semi-regular abandon. Along with Diplectrum, Hypoplectrus, Schultzea and Serraniculus, Serranus are known collectively as Western Atlantic dwarf sea basslets and tend to be comparatively smaller in size to their other Serranidae cousins.

Found across the tropical Western Atlantic, the range of the Tobacco basslet, or Tobaccofish, stretches from South Florida, down through the Caribbean and south to Brazil. Regularly available as vividly-painted 5-7.5cm juveniles, I’ve witnessed many adults double that size on Caribbean reefs.

In an aquarium setting, Tobacco basslets have always held the reputation for being on the ‘jumpy’ side, with a tank lid a must, but in my experience, out on the reef they are far less flighty, and possess an unmistakeable air of confidence. 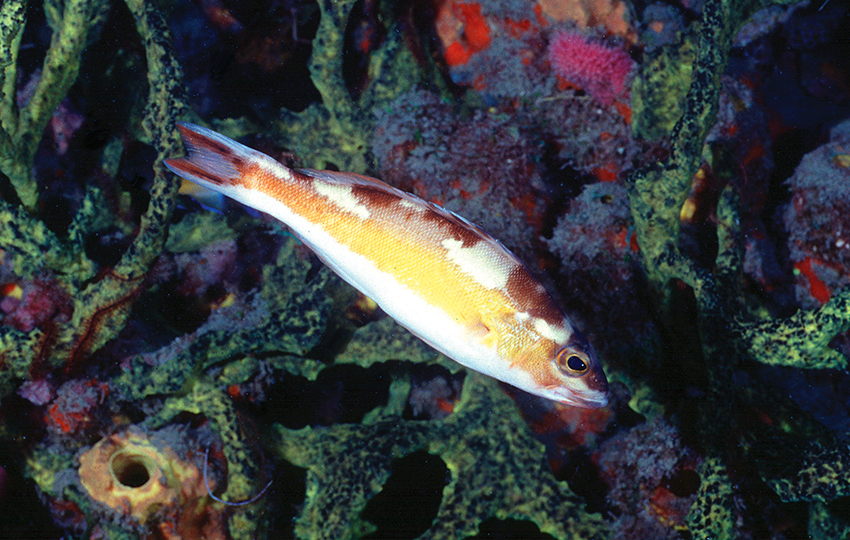 Whilst diving, as long as my approach was slow and steady, I was able to observe them at close quarters as they went about their business unperturbed. Gently finning to maintain my position in the current brought only a flicker of an eye in my direction. While individuals tended to fly solo when weaving around the shallow rocky outcrops, they appeared to be a lot more sociable the deeper I descended. Below 20m, where one swam, the likelihood was that another two or three fish would follow in a loose aggregation.

For the majority of the time, these fish were in feeding mode, busy prowling about a foot or so above the substrate, scanning the sand for any kind of movement. At one point, a trio joined together to follow a school of Yellow goatfish, Mulloidichthys martinicus as they rooted about for a meal. As with most goatfish, these benthic feeders possess chemosensory barbels projecting down from their chin, which they use to probe about for invertebrate prey hidden beneath the surface, and the Tobacco basslets seemed to have cottoned on to the potential of easy pickings. By hovering on the outskirts of the group, they were able to snap up fleeing prey items stirred up or exposed by the commotion, all while expending little additional energy — ingenious.

The only downside to viewing these fish at depth is their apparent muted colouration. Under the bright illuminations of a captive specimen’s reef abode, they really are striking fish. Sporting a thick, burnt-orange horizontal stripe stretching from their eye to the base of the caudal peduncle, with light-brown/black bars daubed over their white dorsal colouration, they appear designed to stand out.

But drop deep down beneath the surface, when looking at the image finder on my camera, those vibrant orange colours become diluted down to an indistinguishable, dull grey. Water absorbs different wavelengths of light at differing rates, and as those with the longest wavelengths tend to disappear first, reds and oranges are the first colours to go. Confusingly, your brain will actually compensate for this loss of colour, so while I believed I was still able to determine orange from brown, it wasn’t until I processed the photos using editing software that their resplendent attire was truly restored.

In fact, given such attractive colours, and in conjunction with their hardy nature, I’m surprised that these fish aren’t more popular with aquarists keeping larger FOWLR aquaria, even if they tend to be more ‘supporting cast’ rather than the lead role. To add to their appeal further, their prominent, over-sized eyes emphasise the impression that these naturally inquisitive fish are observing and studying you, just as much as you are them.