Juan Miguel Artigas Azas discovered the stunning Herichthys tamasopoensis in the 1980s and described this parent supreme as a new cichlid species in 1993.

It surprised me that during previous visits to the valley of Rascón and the Rio Gallinas in Mexico taxonomists had not recognised Herichthys tamasopoensis as a new species even though it looked unique. Other species, some endemic to Rio Gallinas, were described as new as a result of these expeditions.

Large groups of H. tamasopoensis of all sizes scrape off aufwuchs from exposed rocks in this habitat, adopting a steep angle to the rock surface to bite, helping to free algae and other materials by shaking their bodies like some Lake Malawi mbuna cichlids. Their bellies get very rounded by mid morning after this ingestion.

H. tamasopoensis seem basically herbivorous, although they probably opportunistically eat other foods too. I have seen fry and very small H. tamasopoensis relying on detritus as their first food.

The similarity of feeding shoals of H. tamasopoensis and Tropheus in Lake Tanganyika is amazing. However, H. tamasopoensis grouping probably has more to do with the concentrations of aufwuchs growth on some rocky areas than defence.

These fish start breeding as the rainy season stops in the Pánuco area and river level decreases. This could be as early as mid December, when water temperature and transparency increase.

Around this time males commonly develop a nuchal hump which remains until spawning — this being designed either to impress females or intimidate other competing males.

Males set out to protect territories and areas with higher oxygen content below waterfalls shallow enough for algae growth are the favoured zones.

The price to pay for these desirable zones is a greater expense of energy a pair has to devote to protect those borders.

Males as small as 8cm/3.1” participate in pair formation, although they normally procure peripheral areas of colonies or are forced to breed in isolation.

Pair interactions, based mostly on impressing rather than fighting, become common and both males and females simultaneously participate, confronting rivals with short runs while their gills expand to make them appear bigger. Males try to bite each other’s mouths, although no damage is apparent.

A salmon hue shows in the frontal dorsal fin and gill covers. This is common in the breeding dress of the species of the H. cyanoguttatus group.

H. tamasopoensis cleans an area about 5cm/2” in diameter on the surface of a rock, on which it lays up to 200 ovoid yellowish egg. Once the babies hatch they are placed in a small pre-dug pit in the substrate about 2cm x 2cm/0.8 x 0.8”. Contrary to other Herichthys, these fish normally dig one pit and make it too small for large Ictalurus mexicanus catfish to poke in and prey on the fry at night.

Some days after hatching — five under aquarium conditions — when the fry have consumed their yolk sacs, they become free swimmers and are led by their parents, opening and closing their fins to guide them.

Unlike many other cichlids, whose males flee at the first sight of danger, H. tamasopoensis stand up to threats and attack enemies. When a human finger approaches their babies, it is savaged!

Fry also hide from potential dangers, normally under sunken leaves or rocks at the bottom.

It is hard to assess how long parents care for their babies in the wild, but we can get an idea from the larger 1cm/0.4” fry seen in the river with the pairs. It would normally take three to four weeks to reach this size.

Fry apparently feed on micro-organisms and detritus on the substrate. Once reaching a certain size they seem to abandon their parents, as clutches of babies start getting smaller. Babies are normally seen among the cover of rock crevices or in river shallows.

By late April breeding activity is reduced and by late May, before the rains, it is almost finished. 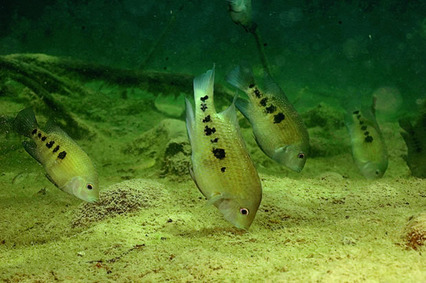 Although this species is not officially threatened or protected, untreated or badly treated wastes of sugar mills, plus pesticides and fertilisers used in sugar cane production have destroyed many ecosystems in México. The Rio Gallinas is no exception.

Although conditions have improved, the Rio Gallinas area, by the sugar mill at Tambaca, was a few years back in such poor shape that no major life was survivable — and little has changed since.

Pollution is a serious problem for this particular habitat. In addition, more areas on the sides of the tropical steppe and the rainforest mountains are being cut for agriculture, with the consequent run-off of soil and sediments that dramatically change for ever the river’s physiognomy and ecology.

Piles of rubbish left by thoughtless picnickers is also a huge problem and although some areas are being cleaned up by the locals the overall beauty of this area is slowly disapearing.

What does it mean?

The ensis Latin suffix in the specific name tamasopoensis denotes place of origin, which is the type locality near the town of Tamasopo in the state of San Luis Potosi, México. Tamasopo derives from the language of the endemic people, the Huastecos; Tam-azote means ‘place where the water leaks’ in reference to the many waterfalls in the valley, hence the word is also translated as ‘place of waterfalls’. 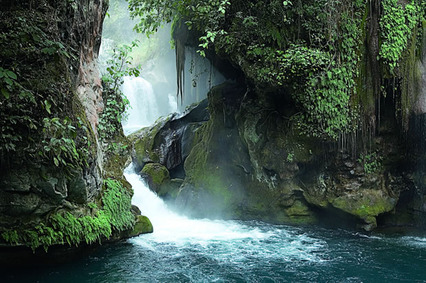 Where does this species come from?

I discovered this species at Las Cascadas (‘the waterfalls’), near Tamasopo, Mexico. Las Cascadas is a part of the Rio Tamasopo, which flows into the Rio Agua Buena, which merges with the Rio Ojo Frio to form the Rio Gallinas.

H. tamasopoensis occurs in the mainstream and tributaries of the Río Gallinas, a Rio Pánuco tributary which runs from 450m/1,476’ to 300m/984’ above sea level in the Sierra Madre Oriental mountain range.

The minerals dissolved in high concentrations offer a blue-greenish sheen to the river and reduce visibility in the Rio Agua Buena and the Gallinas to a couple of metres in the slower flow in the valley flats.

Las Cascadas has many waterfalls, up to about 15m/49’ high, surrounded by lush tropical forest. They fall into pools of beautiful mineral-loaded, clear blue water and there is more than 15m/49’ visibility in the water in late winter and spring. They hold an incredible density of fish, Herichthys tamasopoensis being the most numerous cichlid.

While the smaller affluents of the Rio Gallinas have a higher gradient and a sandy to rocky bed, the main river has a lower gradient and a flow determined by small steps and waterfalls formed by accumulated calcium in the water. There’s mud in the slower areas and the river can be as wide as 50m/164’ during the dry season.

The habitat of H. tamasopoensis is characterised by rocky bottoms varying from boulders to limestone sediments. Rivers may be more than 15m/49’ deep immediately below waterfalls, but generally are 2-3m/6-9’. Water flow varies from moderate to moderately fast.

Although aquatic vegetation is not plentiful — underwater scenery being dominated by rocks, roots and driftwood — some places offer extensive beds of Nymphaea sp., Potamogeton sp. and, in some areas, other aquatic plants such as Ceratophyllum sp., Myriophyllum sp., Riccia fluitans and Chara sp. are also present.

The rainy season is from late May to mid-October when the flow in the Rio Gallinas increases considerably, water becomes murky and temperature drops significantly. Water temperature can reach 28°C/82°F during late April or early May and 18°C/64°F or even lower in July or September, after strong rains.

However, water in the Rio Ojo Frío always remains cooler. Chemically the water has a pH of 7.8 or more and a very high dissolved mineral content, with general hardness measurements over 100°GH not uncommon.

What species does this fish live alongside?

In the headwaters of the Río Ojo Frio at ‘El Quince’ X. continens is also found. Representatives of other families are Astyanax mexicanus (Characinidae), Dionda rasconis and D. catostomops (Cyprinidae), and Ictalurus mexicanus (Ictaluridae). 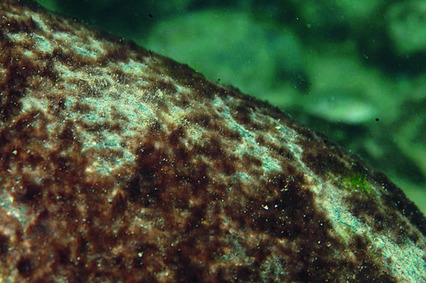 Aufwuchs (pronounced owf-vooks) is a German word referring to the small animals and algae that encrust rocks, wood and plants under water. The aufwuchs layer forms the diet of many catfishes and cichlids which often have teeth adapted to scrape them off.

To keep this fish you’ll need a tank of around 150cm/5’ and 300 l/66 gal. Although this fish can be kept and bred in smaller tanks, you may encounter problems with aggression as they reach adulthood. Add plenty of rocks for décor.

The water should resemble the conditions found in the wild — which is very hard, alkaline water. These fish will suffer from lack of proper maintenance, low oxygen and water warmer than 28ºC/82°F. Poor water quality often results in bacterial infections and their fins and coloration will be the first signs of unhappiness.

Companions are desirable in the larger tanks. Dither fish of the right size, like big poeciilid livebearers or characiniid tetras will probably be just fine, but any aquatic plant might be a salad! Also take into account the social nature of this fish, so keep a group — especially in the larger tanks. Herichthys tamasopoensis can take good care of itself and is only moderately aggressive when young.

In captivity this fish is a slow grower and rarely looks as healthy and colourful as a wild counterpart, which could be down to the food offered in captivity. They are, however, easily kept and spawned.

Herichthys tamasopoensis is not as prolific as others from this group, but still lays several hundred eggs. The fry take baby brineshrimp and the parents exhibit strong brood care.

These fish are gluttonous, but should not be fed highly protein rich foods which seem to affect their health. Take into consideration the low nourishment provided by the aufwuchs they eat in the wild. 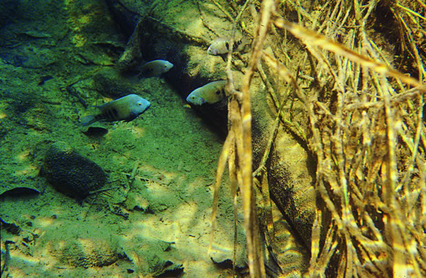 Where can I get some?

Herichthys tamasopoensis are uncommon but have been on sale recently. We saw some youngsters on sale at Arundel Aviaries, Portsmouth, earlier this year. If you can’t track down tamasopoensis, you may be able to find other fish from the same group. Herichthys carpintis and H. cyanoguttatum are much more common. You may also spot labridens and pantostictus. Prices range from £5-25.

Origin: Described from the Rio Gallinas, near Tamasopo, San Luis Potosi, Mexico, but also found elsewhere in the region.

The fish was described in the genus Herichthys in the H. cyanoguttatus (Texas cichlid) group, with which it shares diagnostic features such as the anterior teeth of the outer series in each jaw that are bicuspid and compressed, becoming truncated in adults.

Herichthys species of this group also have pearl-like spots on sides and fins of normal coloured fish. These intensify in dominant individuals and vary from species to species in size, and from yellow to blue in colour with intermediate green.