Heiko Bleher has found some new suckermouth catfishes along the border of Brazil and Colombia, and Venezuela.

Notes: This is in the genus Hypancistrus, the most famous species being Hypancistrus zebra which I saw first in 1975 and collected in the Rio Xingu, Brazil. It was described in 1991. Most others in the hobby had been identified as Peckoltia species, but belong to the new genus and most are still not described. My discovery resembles the so-called L199 from the upper Orinoco.

Aquarium: This suckermouth catfish species needs flowing water and your aquarium should have areas of bright light and shade, rocks and a sandy bottom, as well as driftwood and caves. Have small characoids and/or dwarf cichlids as tank mates. 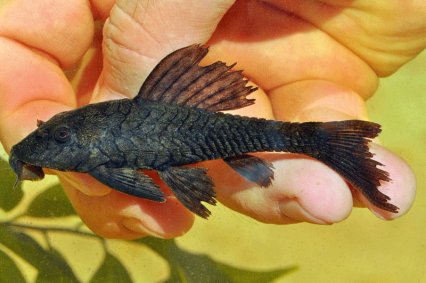 Pseudorinelepis sp. 1. 'Inirida'
Origin: Río Inirida, caño near El Remanso, Colombia/Brazil border.
Water: pH 5.41, conductivity 14-21 µS/cm, temperature 30.6°C/87.1°F (15:00 hours).
Habitat: From a caño (creek) full of leaves, driftwood, fallen-in trees and very shady with overhanging jungle trees. The water was a tea colour, there was hardly any aquatic vegetation and the whole region is a flooding rainforest. This species was often found on the driftwood.

Notes: From the genus Pseudorinelepis we know only a single species, P. genibarbis, from the Rio Purus in Brazil, but there are several still not described. This one is jet black, resembling the so-called L 152 from the Orinoco, but the latter is a brown fish with different morphology.

Aquarium: This species of plec needs little water flow and your aquarium should have areas of shade and plenty of drift rocks, a sandy bottom and leaves. Have small characoids and/or dwarf cichlids and dwarf Crenicichla as tank mates. 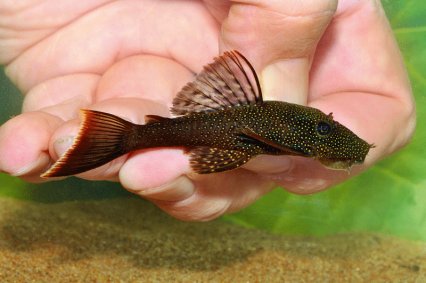 Ancistrus sp. 1 'Caño Tonnina near La Pedrera'
Origin: From a small flowing creek near La Pedrera, Colombia, which drains into the Caquetá river near the Brazilian border.
Water: pH 5.45, conductivity 26 µS/cm, temperature 26.5°C/79.7°F (14:15 hours).
Habitat: The shallow creek had tea coloured but clear water. The bottom consisted of small gravel areas but was mainly of beige coloured sand. There was driftwood and some Cyperus grew along the edges, but otherwise there was no aquatic vegetation in the creek. This Ancistrus  was only found on the driftwood.

Notes: There are more than 55 Ancistrus species described from Panama south to Argentina, but this is probably only a fraction of the existing species. They are found in most of the waters east of the Andes, especially near or along driftwood, fallen-in trees and below layers of leaves.

Sometimes they are also found over rocks, but rarely in fast flowing waters.

Aquarium: This fish needs an aquarium with little flow but definitely driftwood, rocks and a sandy bottom. They are, as most Ancistrus species, ideal aquarium fishes which never grow large, rarely reaching 10cm/4” TL.
Have smaller characoids and bottom dwellers like Characidium or Parodon species and dwarf cichlids as tank mates. 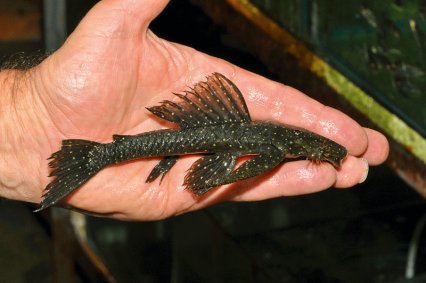 Notes: From the genus Pseudolithoxus we know of only four species, and all of them are from the upper Orinoco in Venezuela. Pseudolithoxus anthrax is similar to P. nicoi, but differs from both in extremely long spines on the pectoral fins, by an absence of them from the lower end of its pectorals, and by its different head ormation, plates and whiskers.

There’s possibly a third or even fourth species in this complex, as the so-called Pseudolithoxus sp. 'Rio Guaporé' is a fish we found in 1982 in the upper Guaporé  and it looks very similar.

Aquarium: This needs flowing water and the aquarium should have areas of bright light and shade, large rocks, sandy bottom, caves and possibly driftwood. As mates I suggest angelfishes (only P. altum live in its habitat), Heros, Geophagus and Uaru species, as well as other tetras such as Bryconops, Iguanodectes, Poptella and Moenkhausia.

Why not check out Heiko Bleher discovers: Apistogramma, in the same series?