Origin: Small flooded area from a tributary of the Sungai Pahang in the Pahang region of Malaysia.

Habitat: This area was full of aquatic vegetation: Hydrocotyle, Lagarosiphon, Najas, Nitella, Myriophyllum, Nymphoides, Azolla, Lemana and other species. It was a paradise for fishes and protected from a surrounding cattlefield by high trees. Trichopsis appeared in groups of three and five among floating plants and in dense submerse vegetation.

Notes: The genus Trichopsis, family Belontiidae, is restricted to Indo-China and the Sunadain. There are possibly more than the three described species  and particularly in Laos I’ve found very different ones. This one had very intensive colours.

Aquarium: The Trichopsis species are peaceful fishes, mostly swimming in the upper regions of the aquarium, and must have floating plants in which to hide and to build nests. They also like lots of submersed vegetation. 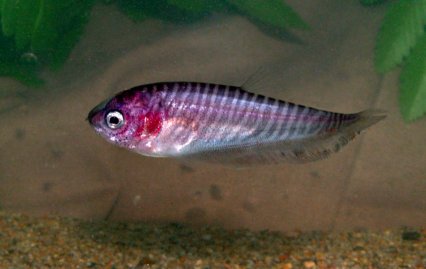 Habitat: As for Trichopsis vittata.

Notes: The genus Notopterus, family Notopteridae found from Africa to South-East Asia, consists of just a single species said to be found from India to the Sunadain. The juveniles should have dark bars, but I’ve seen them differ from country to country. This one is from the central part of the Malay Peninsula.

Aquarium: The notopterid is night active, but in the right condition will often be seen during daylight. It can grow to 60cm/24” in total length, but normally doesn’t exceed 30-35cm/12-14” in aquaria. However, the tank should be at least 120cm/4’ long.

Although it’s a kind of a predator I have not seen this attack other fishes and it can easily kept with the other three fishes shown here — providing they have natural hiding places with several pieces of well watered driftwood and plants, preferably of the species mentioned above for Trichopsis vittata. 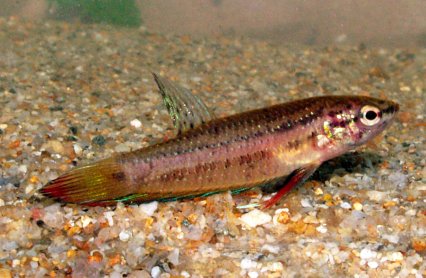 Habitat: As for Trichopsis vittata. This Betta was found along the edges in very low water among overhanging plants and in submersed vegetation.

Notes: The genus Betta (family Belontiidae) and its species, the so-called fighting fishes, have a large tropical distribution, particularly in Indo-China Sunadaln and perhaps most of the species can be found on Borneo.

Aquarium: The natural wild Betta species are peaceful unless trained to fight. In an aquarium they should have floating plants in which to hide and build nests, and are best in shallower waters so ideal for nano aquaria. Water parameters for this species can be as for Notopterus cf. notopterus, but normally they like a lower pH value. 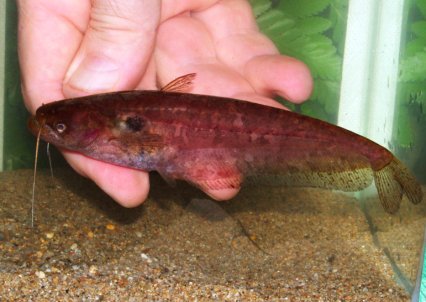 Habitat: As for Trichopsis vittata, but more in open water next to large pieces of driftwood and below Nymphoides aquatica.

Notes: The genus Ompok of the family Siluridae, as found in Africa and most parts of Asia, and its species are normally larger predatory catfishes, although O. bimaculatus is possibly the smallest at 45cm/18” in total length. However, it’s normally much smaller and the size pictured is one I frequently encounter in nature.

Aquarium: The Ompok is also partly night active, but again with the right setting will be about during daylight. The aquarium should be at least 100cm/40” long with the best décor for the others. Include fine sand on the bottom. Water parameters should also be as for Ompok bimaculatus.