Heiko Bleher reveals some of the Apistogramma species which he found recently in South America.

Apistogramma sp. aff. personata (pictured above)
Origin:  Río Inirida caño near El Remanso, Colombia/Brazil.
Water: pH 5.41, conductivity 14-21 µs/cm, temperature 30.5°C/86.9°F (15.00 hours).
Habitat: Caño with sandy bottom covered with leaves, driftwood, fallen-in trees and shady with overhanging trees. The water was tea coloured, had hardly any aquatic vegetation and in a flooding rainforest region.
Notes: A. personata was described by Kullander in 1980 from the Rio Uaupés, near Assai in Brazil, near the Colombian border, and some 500km/310 miles east of the Inirida location where I found it.
Distinguished from A. personata by tail pattern which in the described species clearly comprises eight black dotted vertical lines, and the scale spots are less pronounced.
A. personata is mentioned at 4.42cm/1.74” TL and this specimen was 8.2cm/3.23”. Affinities are otherwise very much the same.
Aquarium: This needs slow flowing water and the aquarium should have areas of low light, floating plants or a Philodendron growing into it, or better roots of other terrestrial plants. If wanting tank mates select only small characoids and/or dwarf cichlids. 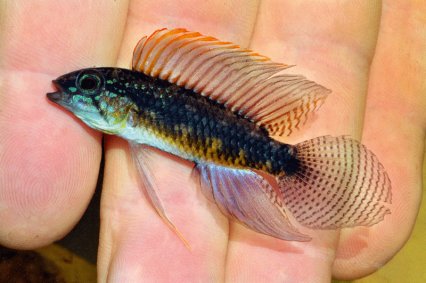 Apistogramma cf. iniridae
Origin: Caño Sardiña, Inirida basin, Colombia.
Water: pH 4.8, conductivity 19 µs/cm, temperature 28.5°C/83.3°F (09.30 hours).
Habitat: Slow flowing creek with sandy bottom covered by leaves, driftwood, fallen-in trees. Overhanging trees offered shade. Black water with no aquatic vegetation, but many tree roots, Philodendron and other terrestrial plant roots.
Notes: More than 70 species of Apistogramma have been described from South America, east of the Andes. There are possibly around twice as many more to be identified next to a number of populations.
I found at least six different populations of A. iniridae, Kullander, 1979, and, sometimes within a single habitat, two or three different colour patterns. Type locality is the Inirida basin.
Aquarium: Perfect for larger nanos with sandy bottoms, few plants, driftwood and leaves. The tank should have a slowly flowing filter, as these fish are used to still water. They breed easily, but males are territorial. 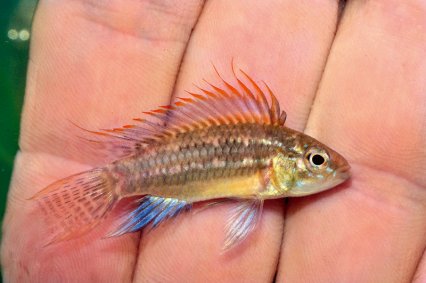 Apistogramma bitaeniata
Origin: Small right-hand caño near the mouth of the Rio Taraira, which forms the border between Brazil and Colombia.
Water: pH 5.56, conductivity 29 µs/cm, temperature 26.5°C/79.7°F (16.30 hours)
Habitat: A tiny clear creek with water less than 5cm/2” deep. There was no aquatic vegetation, but many leaves, driftwood, palm leafs and fallen-in trees and roots. The water flowed very slowly.
Notes: This has the typical morphologic characters of the species described, but colour pattern is quite different. This species had never previously been found so far north from its type locality.
Aquarium: Perfect for a smaller aquarium, with maybe some plants, such as Mayaca fluviatilis, light water flow and some floating plants (Azolla species). The bottom should be of sand and it would be beneficial to add soaked leaves. 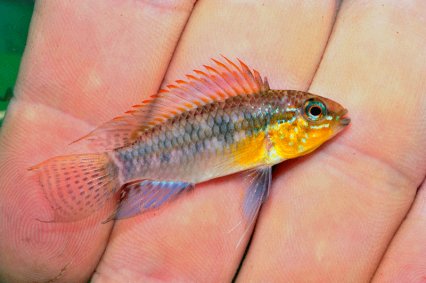 Apistogramma bitaeniata?
Origin: Caño La Libertad, a tiny tributary of the middle Río Apaporis near the waterfall La Libertad in Colombia.
Water: pH 6.56, conductivity 19 µs/cm, temperature 27.2°C/80.9°F (10.00 hours) at 125m/410’ above sea level
Habitat: A clear water creek with water only 10cm/4” deep. No aquatic vegetation, but many leaves over whitish fine sand
and gravel. Fallen-in trees were covered with mosses, as were large rocks. This was thick jungle and the water was slow flowing.
Notes: Possibly a variant/population of A. bitaeniata. It does have some A. bitaeniata morphologic characters, such as the tail pattern and forked shape, but colour pattern is different and so far it has not been seen in such a bright yellow, or golden head, breast and lower former body pattern. This location is far from any other A. bitaeniata known habitat.
Aquarium: A beautiful Apistogramma and ideal for smaller aquariums with fine, perhaps white, sand, light flow of water and some floating plants. Well-watered driftwood should also be included and small pencifishes of the genus Nannostomus, and some Carnegiella species would makes suitable mates.