Bob Mehen takes a look at the the see-through siluriids â€”glassy creatures that refuse to conform to the accepted catfish stereotype.

Catfish seem to be everywhere. The siluriforme group has more than 30 families and, within these, at least 436 genera make them one of the most diverse vertebrate groups on the planet.

To emphasise the point, one in four species of freshwater fish can be counted as a catfish!

This incredible diversity means that these whiskery wonders have evolved to fit into a myriad of niches, but many in the hobby still pigeonhole catfish as cumbersome, brown, armoured beasts or sleek be-whiskered predators.

However, many cats simply don’t fit these stereotypes — and glass catfish are transparently a case in point…

The common name of ‘glass catfish’ is applied to several species of catfish, from Asia and Africa, some more deserving than others of the nickname. The best are truly transparent, convincing viewers they’re using x-ray vision, while others are simply a little translucent in places.

Not only do they buck the conventional view of a catfish’s appearance, their behaviour is at odds with what many would consider normal.

The most commonly sold species are midwater shoalers, out and active in the tank during daylight and not prone to hiding under a log for months at a time — a charge often levelled at some better known brethren! 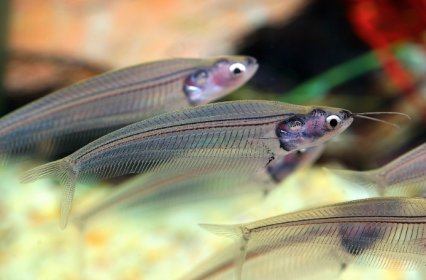 Perhaps the most commonly seen species and most deserving of the name is Kryptopterus minor, the Asian glass catfish. It’s also sometimes sold by the more attention-grabbing ‘ghost’ or ‘phantom catfish’ tags.

A member of the siluridae family and native to Indonesia, these fish resemble an x-ray image when viewed from the side, with much of their skeletal structure clearly visible through laterally compressed transparent bodies.

Their organs are held within a silvery reflective pouch just behind the head, which is the only part of the body you can’t see through.

They have two long whiskers held forward on their top lip and, while initially it may seem they have no dorsal fin, close scrutiny of their arched back will reveal a tiny, vestigial fin that’s been reduced to little more than a single spine just behind the head and often held flat to the body. They also have no adipose fin.

These fish are frequently incorrectly labelled in shops and some literature as the similar looking K. bicirrhis, but it’s unlikely that this species is imported as it grows to 25cm/10”. The fish sold in the hobby seldom top 8cm/3”, which helps confirm them as the more diminutive K. minor.

At rest these fish swim in a characteristically head up, tail down, position at a 45° angle, holding station in mid-water with constant flicks of their tail. 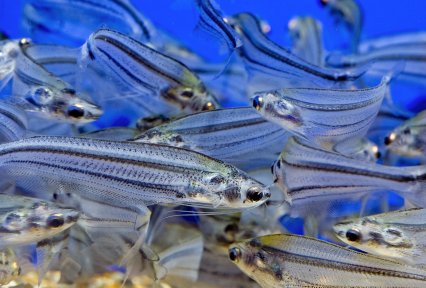 At first glance this widely distributed West African species appears almost identical to K. minor, but it is not closely related, being instead a member of the schilbeidae family.

More detailed inspection will show several obvious differences which don’t require the trained eye of an taxonomist. Firstly, they grow bigger than the K. minor, with sizes of 15cm/6” reported in wild fish, and although it seems aquarium specimens seldom attain this length they still outgrow the smaller Asian fish.

The most obvious initial difference, however, is the fact that these fish are not nearly as glassy — being generally more opaque and having three often quite clearly defined dark bars running from nose to tail: one on the dorsal surface, another along the lateral line and the last along their belly.

They also possess a second set of whiskers and these are more likely to be held trailing behind as the fish swims.

A final giveaway is the fact that they have no dorsal fin, but do possess the adipose that’s absent in their Asian lookalike. 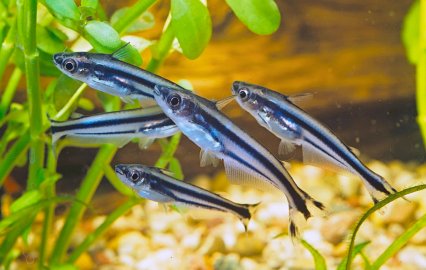 A final species sometimes called glassy is Pareutropius buffei — the Three-striped African. This is another member of the schilbeidae family, but smaller than P. pellucida, in reaching around 7cm/2.8”. Of the three glass catfish covered here, this fish is the least deserving of the nickname, being at best translucent rather than transparent.

Their bodies are generally milky white, fading to blue in places and clearly marked by three deep, blue-black stripes running the length of the fish. Their head and eyes develop a bronzy sheen which is readily apparent when fish are in good health.

These have a more cigar-shaped body than the two previous glass cats described, being less compressed laterally, more straight backed and having an obvious dorsal and adipose fin. Their mouth is fringed with three pairs of relatively short sensory barbels.

They are also often sold as ‘Debawi cats’ as they are confused with the rarer P. debauwi. 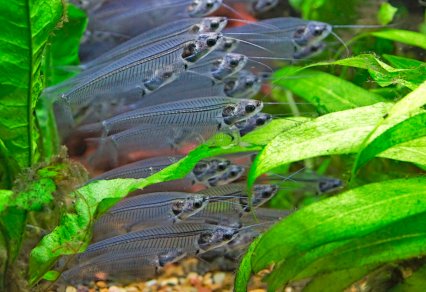 How do I prepare my tank to keep these fish?

All these species will do best in soft, slightly acidic water. The Asian glass catfish is probably the most delicate and sensitive, often becoming slightly opaque if conditions don’t suit, so watch out and take appropriate action.

The two African species, coming as they do from a greater range of conditions in the wild, are more adaptable, but you must aim for a pH around neutral to avoid any problems.

A temperature around 26°C/79°F will suit them well.

All three species can be timid, especially when housed with overly boisterous or aggressive fish or in too few numbers.

Choose any potential tank mates with care and always stock in large groups of at least six, otherwise these fragile-looking fish will refuse to feed and pine away.

However, in sufficient numbers they should be out and about throughout the day, whirling in search of food or resting in a tight shoal in a sheltered corner.

These fish are found in slow flowing rivers in the wild and as such will enjoy gentle current.

All are truly plant friendly, preferring to feed on foods such as Daphnia, bloodworm and brineshrimp. They will also rapidly adapt to suitably sized, slow sinking dry foods.

Excellent community fish when kept with similarly peaceful tank mates, they are only a risk to small fry.

An attractive Asian-themed tank for Kryptopterus minor might include shoals of Harlequin rasbora, (Trigonostigma heteromorpha) peaceful gourami species such as the Lace or Pearl (Trichogaster leerii) and perhaps some of the smaller bagriid catfish such as Shadow (Hyalobagrus flavus).

African themed tanks for the other two species could include peaceful dwarf cichlid species, such as Kribs (Pelvicachromis pulcher) and other catfish such as the Upside-down and Pyjama catfish (Synodontis nigriventris and S. flavitaeniata).

All these fascinating fish typically sell for between £3 and £5 each, with Parailia pellucida attracting the highest price when correctly identified because of its comparative rarity.