Getting started in fish breeding Have fish, will breed, right? If it was that easy, we’d all be doing it already. Nathan Hill looks at a few of the considerations to take on board if you want to try your hand at fish spawning.

For most of us, our first foray into the world of fish breeding will be an accident. You might come down in the morning and suddenly find a brace of baby guppies being chased about and eaten by their parents when you turn the lights on, or your tank’s inhabitants might be clustered nervously at one end as a pair of Angelfish defends a clutch of eggs on a leaf at the other.

Dedicated breeding is an art unto itself, and requires a little forethought and planning if it’s to be a success. While it’s impossible for me to cover the finer points of breeding for all of the 18,000 or so different freshwater species, I can at least make a start on drawing up a checklist of some areas that should be second nature if you want success.

Fish don’t hatch out into fully mature young, and the rate at which they develop their sexual organs varies wildly between species. Some species of killifish develop at breakneck speed — the Turquoise killifish, Nothobranchius furzeri, can be sexually mature in as little as 14 days after hatching. Meanwhile, fish like the curious South African marine Coelacanths have to wait some 50 years before they can produce a single offspring.

Whichever species you hope to breed, understanding how long they take to mature (and, just as importantly, when they become too old to ‘perform’) is essential. But being able to produce eggs alone isn’t the end of it. As a general rule, younger parents will produce fewer offspring and smaller eggs or young (though there are exceptions), so trying to breed a fish too early in its life can bring disappointment. 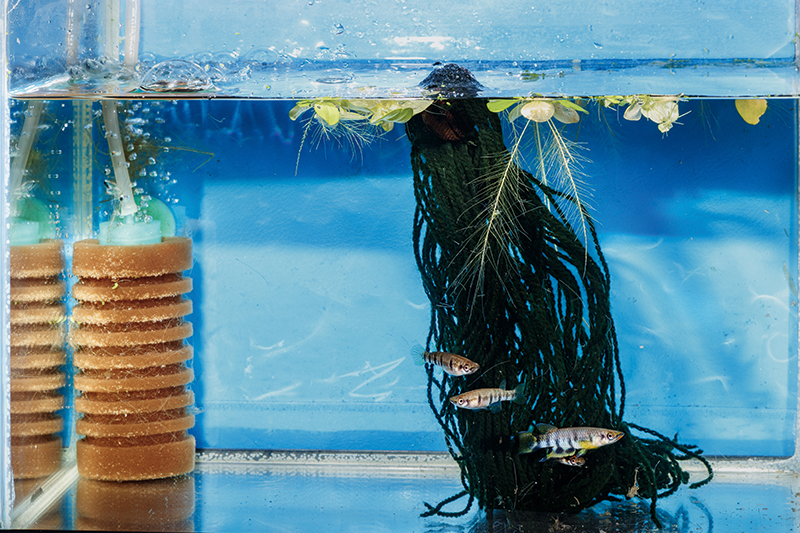 A breeding mop will collect eggs.

Fish have evolved to live in very specific environments, few of which remain the same all year round. In order to produce the best results for their offspring (ensuring that their hatching eggs have an abundant food supply, for example), many fish have learnt to time their reproduction to climatic events. In a lot of cases, this seasonality can consist of a simple warm ‘dry’ period (recreated by turning the heater up a degree or two) followed by a cooler downpour of rain, simulated in the aquarium by a water change using slightly cooler water than is already in the tank (to go the whole hog, you could even use a watering can with a rosette head to simulate rainfall).

In some cases, I’ve even heard of breeders that monitor the weather forecasts for approaching storms, timing their tank husbandry with meteorological reports, so that they can even replicate the type of barometric pressure their fish might experience in the wild as a ‘trigger’. Find out if your fish is from a seasonally affected region, and see
if matching those changes in weather helps.

While it’s accepted that keeping fish in the wrong water chemistry can impair its health in the long run (hardwater fish in softwater suffer loss of electrolytes, while softwater fish in hardwater have to work their kidneys extra hard), even the biology of a fish egg can be affected by water. Specifically, many fish eggs have a tiny hole (the micropyle) through which fish sperm passes. A tiny trigger of calcium attached to the sperm causes the micropyle to close, meaning that no other sperm can enter, but in some cases it’s known that excess hardness of water can trigger the eggs to close as soon as they are laid.

Moreover, many fish generally refuse to spawn in the wrong water chemistry, while in some cases the pH of the water can have an effect on the sex of the young. Kribensis are a case in point here. When bred in acidic conditions, their young are predominantly female, while in alkaline water they produce more males. Reading other breeders’ reports can be invaluable in finding trends in water chemistry and spawning activity. 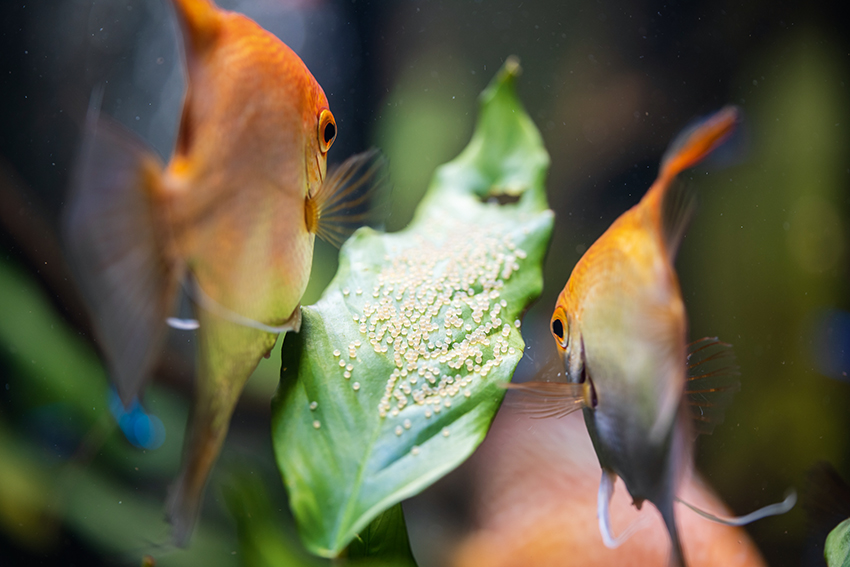 Angelfish laying eggs on a leaf.

You’ve added a dozen tetras to a breeding tank, done everything right and still nothing happens. Chances are, you might have a really skewed sex ratio.

Fish with obvious male and female characteristics like Apistogramma aren’t a problem here, it’s the fish that all look alike in adulthood.

In some cases, there may be subtle clues — the female Neon Tetra, for example, has something of a kink in her blue line when she’s sexually mature — but with some other species it’s all but impossible to tell without the use of a microscope.

When purchasing fish for breeding, it’s wise to defer to the experts and ask if they can supply you with males and females. Ratios are also important, as in the case of livebearers like guppies. A single female guppy housed with a dozen males will be harassed to exhaustion and eventual death, whereas three or four female guppies housed with each male will produce a profusion of offspring without stress. 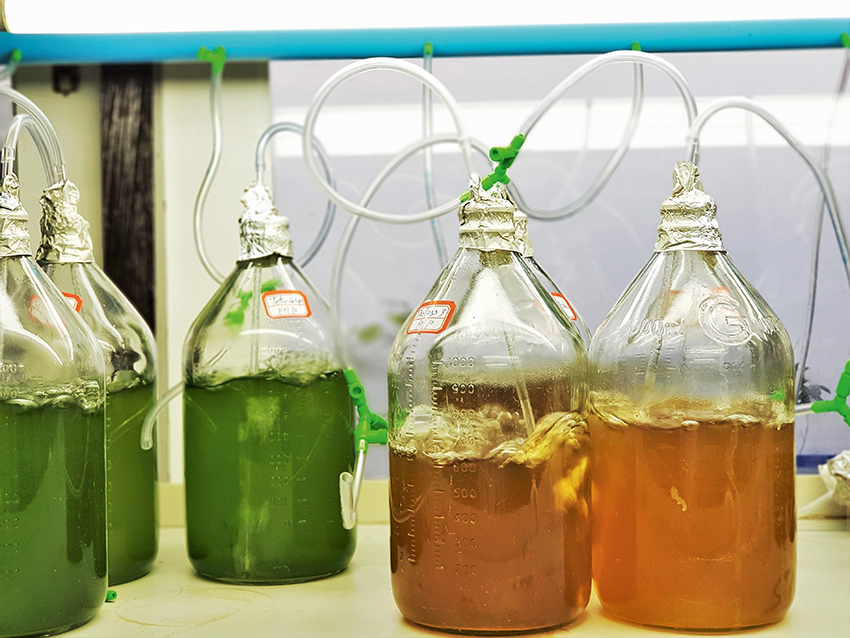 For tiny fish, several fry cultures may be needed.

In a community tank, packed as it is with opportunist feeders, a tiny, meal-sized egg or baby fish isn’t going to last long. To breed properly, you need to set up something specifically for the job, away from predation.

In the case of barbs and tetras, this might be a tank with a mesh base, which allows the eggs to fall out of reach of the mouths of the hungry parents (they’ll eat their eggs as fast as they lay them). Other fish like certain killifish may require a region of peat (such as in a Tupperware tub or jar placed into a breeding tank) in which they can lay their eggs. Some fish refuse to spawn without access to caves (a flowerpot on its side will often do the job), while others need materials to make elaborate nests, like Dwarf Gourami or Hoplo Catfish that make a bubblenest from a sticky oral secretion that binds leaves and debris at the surface. Some Corydoras spawn directly on glass panes or leaves, while others insist on spawning in sand.

One newcomer mistake is to put fish into a bare tank with minimal cover and hope for the best. Without an adequate spawning surface, a lot of fish simply won’t know what to do, and will refuse to breed. 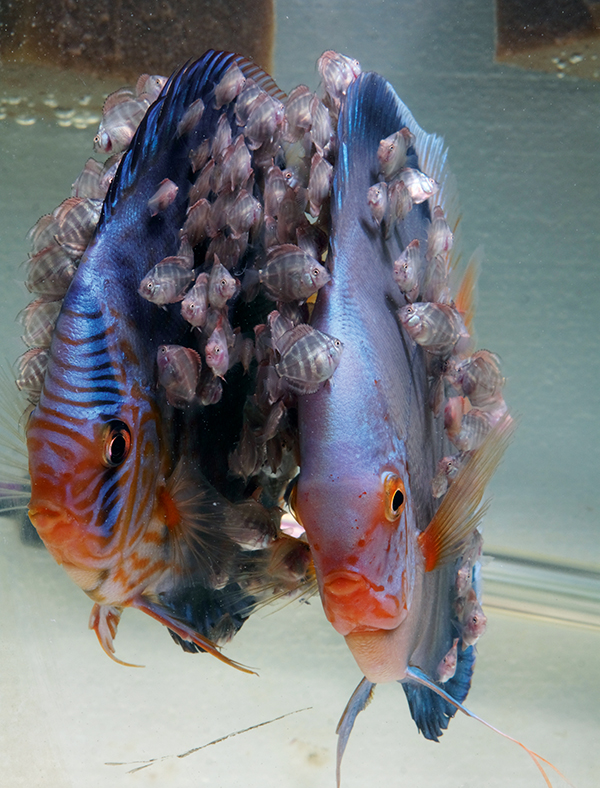 Discus feed their own fry with a nutritious slime.

We often think of fish as ‘fire and forget’ creatures that just lay a bounty of eggs and leave them to the ravages of chance, and in many species that is true. But there are many fish that tend to their offspring religiously, and to remove them from each other can be an early death sentence. Angelfish are good examples of fish that clean their eggs and fan them with oxygen, while discus are famed for producing a nutritious slime coating for their young to graze on. Some snakeheads go as far as to release thousands of infertile eggs as a food source for their growing fry. Fighting fish will pick up young and eggs that fall from their bubblenest and spit them back up into it.

On the flipside, some fish cannot be trusted with their young after a certain period — there are quite a few anabantids that initially care for their young and then snack on them when they seem to forget why they were nesting in the first place.

Again, breeding reports will give you a strong look at these behaviours, but observation and diligence will still be needed. Fish are highly individualistic, and so each and every spawning effort may be a case of trial and error. 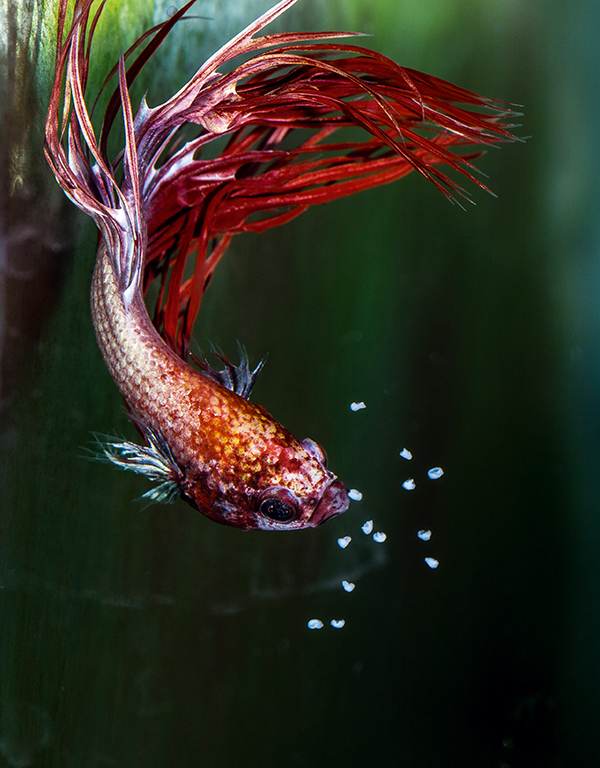 This is a huge downfall for newcomers to breeding. Spawning fish is something you plan for, not something you react to after it happens, and ensuring a supply of quality foods for the newly hatched fry (once they’ve depleted their life sustaining yolk sacs) is vital.

Try to start your live food cultures for fry before you start the spawning process. Essentials include things like infusoria (which can be grown with a piece of lettuce in water, perched on a windowsill somewhere), freshly hatched Artemia (which requires a dedicated hatchery), and microworms, which can be grown from a starter culture on porridge oats in a Tupperware tub. Exceptionally small fry like those of gouramis have correspondingly tiny mouths, and may initially need rotifer cultures, so it’s not a ‘one size fits all’ approach with fry feeding.

In some cases, Hamburg mat filters or internal, air driven foam filters can provide a surface rich in the micro-organisms fish fry feed upon. Leaf litter, degrading in the tank, can be another great source. 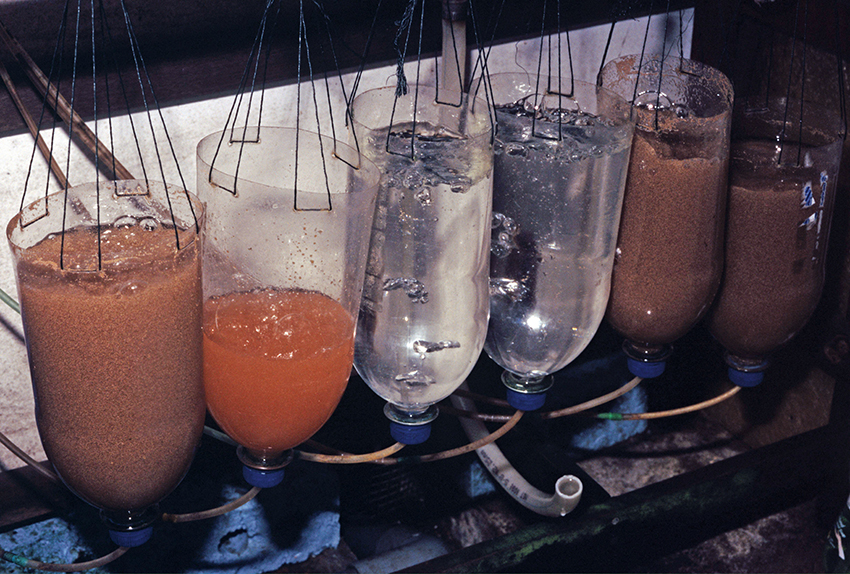 Artemia cultures need to be set up ahead of time.

A guppy will breed regardless of what it’s fed on, but some fish need to be brought into condition ahead of spawning. Usually this involves a couple of weeks of hearty, protein rich meals (lots of live and frozen foods as well as or instead of dry foods) that will really help the female to develop her eggs.

Before any fish is spawned, it’s vital that the females of the species are plump and rounded (where appropriate) and males are full of colour and vitality — both achievable by feeding a rich and varied diet. 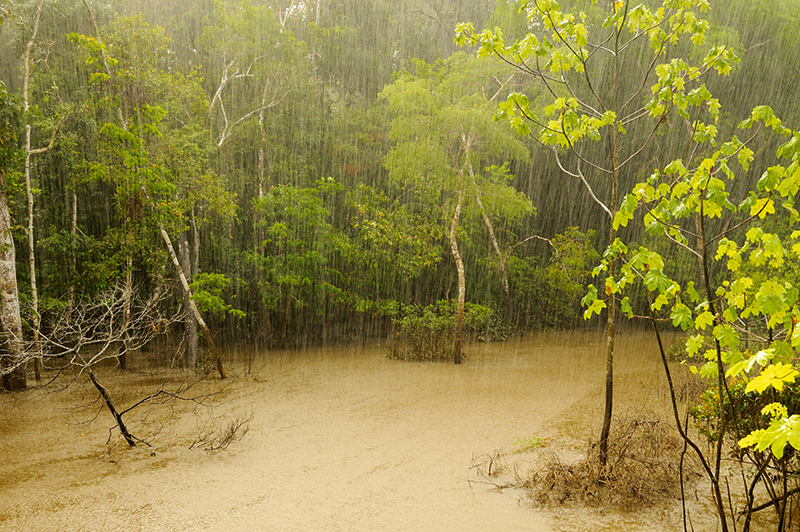 Mimicking a wet season may be required.

‘Insanity is doing the same thing over and over and expecting a different result,’ Einstein once said. He wasn’t breeding fish, but he’s right. As a breeder, it’s important to try slight variations each time if you initially fail to spawn your fish. But those variations mean nothing if you don’t remember what they are. Take notes, and include every detail you can — time of day of spawning, foods used, water parameters, temperature, lighting levels, age of parents, egg numbers — everything! This will help you to compare with other breeders who might be able to spot glaring errors in your approach. Or, just as possible, you might introduce something new to the community and help bring in a new era of successful fish breeding! rich meals (lots of live and frozen foods as well as or instead of dry foods) that will really help the female to develop her eggs.

Before any fish is spawned, it’s vital that the females of the species are plump and rounded (where appropriate) and males are full of colour and vitality — both achievable by feeding a rich and varied diet. 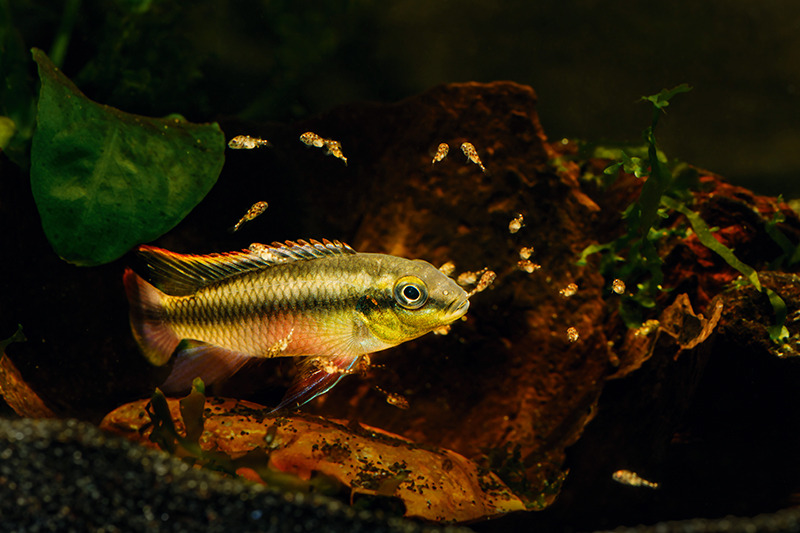 Social media is largely a poor platform for asking breeding advice (folks will just reiterate anything they find on the internet and pass it off as personal experience), aside from the dedicated groups that deal in specific fish. Some of the best breeders you’ll find in the country are those in fish clubs, so it’s worth ingratiating yourself by joining up where possible. Fish showers breed their own fish, and are extremely invested in doing so, but they’re also a tightly meshed community and will always be able to point you to an expert of renown.