Freshwater shrimp expert Chris Lukhaup explains how to keep the stunning new freshwater shrimps being exported from the Indonesian island of Sulawesi.

In the central highlands of the Indonesian island Sulawesi, formerly Celebes, the ancient systems of Lake Poso and the Malili lakes harbour two independent and endemic species flocks of the freshwater shrimp Caridina.

These are part of a well known genus in aquatics, but less well known, until now, were the flamboyant colour patterns in some species that resemble marine rather than typical freshwater shrimps.

However, these colourful shrimps are exclusive freshwater dwellers and occur only in those lake systems. They all have rather large eggs and their larvae only develop in freshwater " in contrast to other Caridina species with some salinity tolerance at the larval stage.

The fauna of Lake Poso and the so called Malili lakes, or Malili lake system, was first studied by Swiss naturalists and cousins Fritz and Paul Sarasin in 1895 (Lake Poso) and 1896 (Malili lakes). Apart from shrimps, the lakes are also home to several other endemic and partly colourful species; for example fish, snails, crabs or snakes.

An international team of researchers is describing the species diversity and trying to understand how it could evolve. 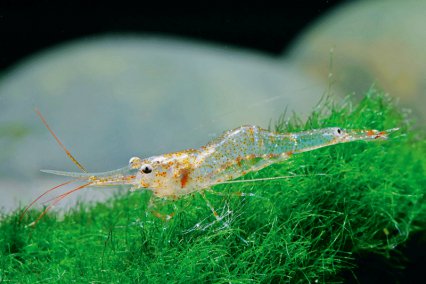 Lake Poso is a solitary lake with adjacent rivers and a maximum depth of 450m/1,476 . It has very low nutrient and organic content, or, in other words, it is oligotrophic.

Four shrimp species are currently described from the lake and its river system and are Caridina acutirostris, C. ensifera (the original 'red' form is pictured above), C. longidigita and C. sarasinorum " mainly by E Schenkel in 1902 based on the Sarasins collection and revised by Cai and Wowor in 2006.

Red is the original C. ensifera described by Schenkel, 1902, and blue will be described as a new species. Both are difficult to distinguish if present as the alcohol-bleached material commonly found in scientific collections, although living specimens (adults and juveniles) can always be told apart.

Besides conspicuous blueish body appendages with an otherwise transparent body in blue versus not blueish in red, the main difference is prominent in the tail fan.

They not only differ in colour, but also in ecological preferences and behaviour.

Blue is rather stationary and mainly found on hard substrate (wood and rocks), whereas red is often found in pelagic swarms or sporadic on various kinds of soft and hard substrate: for example, sand, macrophytes and rocks.

The latter also has the highest density of all shrimps in the lake and is often caught by local fishermen.

The Malili system comprises five lakes sharing a common drainage. The three major ones are Towuti, Matano and Mahalona with two small satellite lakes, Masapi and Lontoa or Wawontoa.

Two of the Malili lakes, Matano and Towuti, and Lake Poso are known to be oligotrophic, although the three smaller lakes of Mahalona, Masapi and Lontoa are more shallow and probably have a higher nutrient content, and provide very similar ecological properties for its inhabitants. 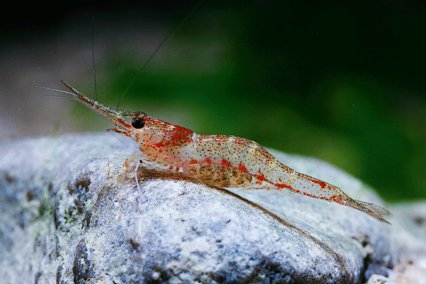 The majority of the Malili shrimps were first collected in 1932 by R Woltereck and later described in 1937 by his daughter E Woltereck with eight species (Caridina lingkonae, C. lanceolata, pictured above, C. loehae, C. masapi, C. opaensis, C. tenuirostris, C. towutensis and C. spinata), followed by the description of C. spongicola, (Zitzler and Cai, 2006).

Currently Woltereck s species are revised and several new species are added by Kristina von Rintelen and Yixiong Cai from Singapore. Neither Schenkel nor Woltereck knew about the spectacular colours of their shrimps so unusual for the genus Caridina, although some colourful species have been sporadically described, for example C. trifasciata from Hong Kong.

All Malili species exclusively occur in the lake system, including its drainage, but some are widely distributed within the whole system. Others only occur in one or two of the lakes, or only in rivers. The lakes provide a number of micro-habitats with different substrates (soft like sand or plants, hard like rocks or wood), and the majority of shrimp species are specialised to one substrate.

Their detailed food compounds remain unknown, but in the gut of some specimens several diatoms were found, although they might also consume detritus and algae.

Not all species are specialised. Some are generalists that often occur on different types of substrate and usually widely distributed within the Malili lake system.

Their choice of habitat is rather unspecific and they can occur on soft substrate (water plants, leaf litter) or hard substrate (wood, rocks). 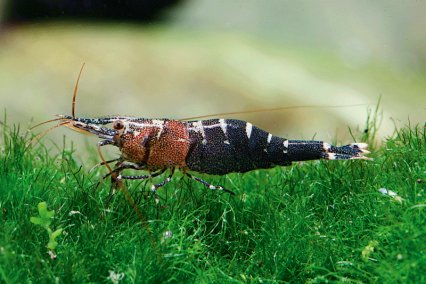 These are for example Caridina lanceolata, C. masapi and C. sp., a still undescribed riverine species (pictured above).

While the latter only occurs in rivers surrounding the lakes, C. lanceolata and C. masapi mainly be seen in the lakes themselves.

C. masapi has the widest distribution of all shrimps, being the only one living in the small satellite lakes of Masapi and Lontoa, but also occurring in the other three lakes and in rivers.

C. lanceolata can mainly be found in the three major lakes Towuti, Matano and Mahalona and their connecting rivers such as the Tominanga or Petea.

All generalists have a less spectacular coloration than the other more specialised species; from a reddish-translucent pattern in C. lanceolata to brownish with lighter stripes in the other species.

More conspicuous are the colourful species usually not widely distributed within the Malili lake system, but rather occurring locally restricted and highly specialised.

One extreme example is C. spongicola which is associated with a yet undescribed freshwater sponge and whose occurrence is limited to those areas where the sponge grows.

Some other examples are described here. Colour patterns are species specific, their intensity however can change depending on food supply (substrate) and water conditions " for example, some red species were observed to turn blue under stress. 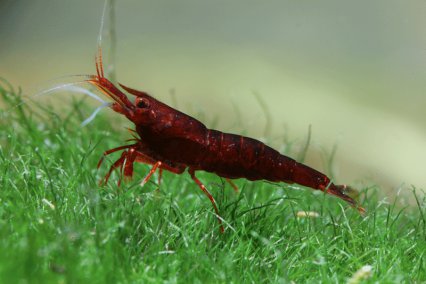 There are a number of rock-dwelling species from Lake Towuti, the largest and southernmost of the Malili lakes, for example the beautiful C. spinata (pictured above), C. loehae and three other yet undescribed Caridina sp. C. lohae is mainly red with some white stripes or dots, C. spinata is rather dark red, sometimes almost purple with yellow or orange stripes.

The first C. sp. shows characteristic red and white longitudinal stripes with conspicuous white front legs (cheliped), the second a rather brown and white pattern of horizontal stripes. The colour pattern of the third closely resembles that of the sponge dweller C. spongicola, although it is a different species with specific substrate preferences.

These three undescribed species often occur together with C. loehae on gravel or smaller rocks in shallow water or with C. spinata between boulders in deeper water below 5m/.16 .

Another beautiful rock dwelling shrimp from Lake Matano is an also undescribed species that has a dark red body with white dots and white body appendages.

One lake species lives mainly under dead leaves, although it can ocasionally be found on other kinds of substrate.

This species behaviour seems to be able to adjust for, when disturbed, it usually lets itself fall downwards instead of moving in other directions.

Swarming typeIn the Malili system, depending on time of day, two species were observed in larger swarms, similar to the red C. ensifera from Lake Poso.

One is C. lanceolata, the other C. lingkonae, whose inconspicuous reddish coloration resembles that of C. lanceolata, but which can also be characterised as a specialised pelagic species.

It often occurs in huge swarms mainly in Lake Towuti, but one specimen was also found in the smaller Lake Mahalona. More details about the life history of C. lingkonae are unknown.

The colour pattern of this as yet undescribed Caridina shrimp closely resembles that of the sponge-dwelling C. spongicola.

The shrimps colour diversity is only one aspect of the fascinating fauna of Sulawesi's ancient lakes.

These are also home to many rare and unusual species, for example the shrimp sponge association that make it similarly worthy of protection as the Galpagos Islands.

Some of the highly specialised and locally restricted species with very small populations, especially the colourful ones, are already threatened with extinction by illegal logging around the lakes and other human impacts.

So, sampling living specimens should be sensibly limited to preserve the species and colour diversity for future generations.

For more information on Sulawesi shrimps check out the article: Eight new shrimps described from Sulawesi.

This article was first published in the July 2008 issue of Practical Fishkeeping magazine. It may not be reproduced without written permission.