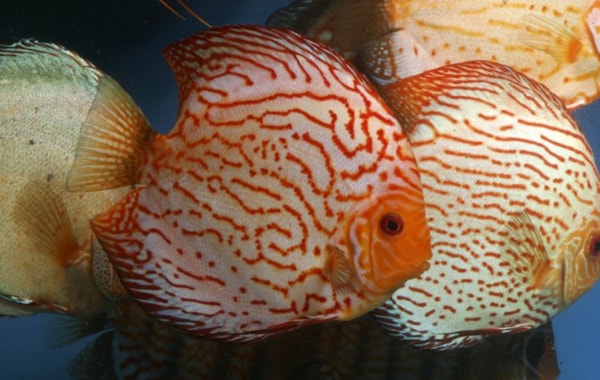 Some fish prefer soft water, and others benefit from softer water for breeding. But how do you make hard water soft, and how do you interpret hardness levels? Matt Clarke explains.

Hardness is a term limited to freshwater and describes the total concentration of certain minerals dissolved in the water. Most hardness is largely made up of calcium and magnesium, but other minerals including potassium and sodium contribute to the overall hardness.

Water high in calcium and magnesium is called 'hard' and water deficient in these minerals is called 'soft'. In parts of Wales, Yorkshire, Scotland and Cornwall, the tapwater can be quite soft, but, in most areas of the UK water is very hard and alkaline.

Conductivity, which you can measure with a special electronic meter, is a measure of the overall mineral content of the water, not the concentration of specific minerals.

Why is this important?

The water in different geographic regions and habitats differs in its hardness and pH. Fish have evolved to live in the chemical conditions of their natural environment, so they have preferences or needs for water of a specific chemistry in captivity.

Hardness is most commonly affected by the surrounding geology of the area. In places where rocks are calcareous (calcium-rich), like Lake Tanganyika, the water is very hard; where the rocks are inert (have no effect on water chemistry) the water can be neutral or soft.

Fish from areas where the water is roughly neutral are fairly adaptable and will tolerate most conditions, providing they're not too extreme - but fish from very soft, acidic water (acidophiles), or very hard alkaline water (alkalophiles) won't tolerate conditions at the other end of the scale. So it's a bad idea to keep Discus (acidophiles) in very hard water, or Tanganyikan cichlids (alkalophiles) in very soft conditions.

Some species are reluctant to breed in water of the wrong hardness. Water hardness may also have some effect on the hatch rate of fish eggs.

Are pH and hardness linked?

These properties are reflected in the water chemistry requirements of the fish. If you're adjusting the hardness or pH to suit fish with specialist needs, remember that not all strategies for reducing the hardness will lower the pH, and some techniques for lowering pH will have no effect on hardness.

How is the hardness of water expressed?

This is where things get confusing, because there are several ways of expressing water hardness. Different books, test kit manufacturers and fishkeeping experts use different measures.

It's a grey area - most of the industry experts we spoke to admitted some confusion.

GH - General, total or permanent hardness is a measure of the overall concentration of calcium, magnesium and other ions. It's measured in degrees, with one degree equal to about 17.9mg/l. The degree symbol is often replaced with a "d" (i.e. 6dGH). The harder the water, the higher the GH.

KH - Buffering capacity, temporary or carbonate hardness. The 'K' in KH comes from the German word 'karbonate'. KH is a measure of bicarbonate and carbonate ions that act as buffers to prevent the pH dropping. The ions that make up KH can be removed by boiling.

KH makes up a component of GH, so boiling will also reduceGH slightly. One degree KH is equal to 17.9 mg/I CaCO3. It's also measured in degrees. The degree symbol may be replaced with a d (ie. 2 dKH). Because KH makes up part of the GH value, you can't have a KH higher than your GH level.

DH - Deutsche harte or German hardness (sometimes written as dH) is (according to our consensus of experts) essentially the same as GH. (But some experts debate this). It's sometimes used in Discus keeping circles. It's also measured in degrees One degree DH is equal to 17.9 mg/I CaCO3.

Clark - English degrees of hardness are actually rarely used in the UK. One degree Clark is equal to 14.3 mg/I CaCO3.

Some argue that, because Clark is the form of hardness we're supposed to use in the UK, that this means that when we say GH, we're actually talking about 14.3 mg/l CaCO3 rather than the 17.9 mg/l CaCO3 you'd see if we were using dH. A fair point, but I've yet to meet anyone, inside or outside fishkeeping who actually uses Clark. Everyone considers GH in England to be 17.9 mg/l CaCO3 so it's essentially the same as DH in practice.

Hardness - American degrees of hardness. One degree is equal to 1 mg/I.

If there are so many, which one should I use?

At PFK, we generally use GH and KH, because they're the most descriptive terms. It might be easier if everyone stuck to the same measure, like mg/litre CaCO3, but unlike GH and KH, there are few mentions of CaCO3 values in fishkeeping literature.

How do I test for hardness?

There are two main types of test kit on the market for measuring hardness: GH kits and KH kits.

Hardness kits are based on titration, so you add the reagent drop by drop until the colour changes. The first drop may make the sample go blue and you then add more reagent one drop at a time, counting until the sample starts to change colour. The final drop will make the sample change to a different colour (usually red or orange). Simply add up the number of drops to get the hardness.

Good test kits come with some general information on the right hardness levels for different fish and a conversion chart that you use to translate the result into a different measure of hardness, for example, DH to Clark.

Most species are OK in moderately hard or slightly soft water. Acidophiles and alkalophiles are less tolerant, You probably won't need to make large or exact adjustments if you're keeping general community fish, but if you want to breed some species, you may need to soften and acidity your water. Check in a good book.

Discus will not breed as successfully or as vigorously in hard, alkaline water. For general Discus keeping a pH of 6.0-7.0, adequate. But, for breeding, soften and acidity the water a little more. A pH of 6.0-6.5, GH 2 and KH 1 is better - but you will need to make sure you make lots of water changes to prevent the pH from crashing.

What's the best way to make my water soft?

While there are some resins on the market that remove certain minerals from the water, the easiest method is to use demineralised water, like RO from a reverse osmosis unit. Rain water carries a risk of pollution and may be very acidic. Make sure you collect from a clean roof and filter it through activated carbon.

What is a reverse osmosis unit?

The pH is usually neutral, and the GH and KH are usually 0. This lack of buffering capacity means that you can easily reduce the pH to the desired level by adding peat or acids, and you can adjust the hardness by adding minerals.

You must never use raw RO water. Fish need some minerals in the water for physiochemical reasons. Similarly, if there's no KH to buffer acids in the fish wastes, or from photosynthesis and the respiration of fish and plants, the pH will fluctuate wildly or drop to a dangerous level.

You can remineralise RO water by adding a compound like Tropic Mann Re-Mineral F or API Electro-Right. RO units need plumbing in to the mains water system, and most models generally need to be run continuously. But you can also buy RO water from most good shops.

What does peat do?

Peat is thought to take in certain minerals and release chemicals including tannic and humic acids into the water which acidity it, if, and only if, the water has a low enough KH. Peat can be effective, but won't do much if you've got hard, alkaline water because the KH can prevent the acids from reducing the pH. Peat filtering the water is said to be most effective...

Can I use water from my tapwater softener?

How do I make water of the required hardness?

There is a mathematical way to do this using something called Pearson's Square, but some mental arithmetic and trial and error is just as effective. RO is the best stuff to use. Add small, measured quantities of re-mineralising compound to one litre volume of hardness-free water until you reach the hardness you're after. Then simply scale up the dosage to treat a bucket - the results should be the same.

I can't reduce my pH and hardness. What might be the cause?

Chances are, the decor is leaching chemicals into the water that influence the pH and hardness.

Many aquarium gravels, and many types of rock, are calcareous and will make the KH (and therefore the GH) higher, and usually also influence the pH. This means that if you do manage to reduce the pH or hardness by using RO, rain water, chemicals or resins, it probably won't stay down for long. If you keep soft, acid water fish and you want to prevent the hardness and pH from rising, use an inert substrate like aquarium sand or lime-free gravel.

Adding pH-reducing acids, or bases to boost the pH can cause more harm than good. Fish are intolerant of large swings in the pH and may fall ill or die if you make big changes to the water chemistry. For the majority of species, it's not necessary to alter the pH, so it's safest not to meddle.