Small, attractive and cute — no wonder pygmy angels endear themselves to many marine aquarists. There are some 34 described species in the Centropyge genus, rarely ever longer than 15cm/6”. However, they can vary in ease of keeping and some are big on attitude.

If trying to keep Centropyge get to know the pitfalls in maintaining these confusingly feisty but shy fish. 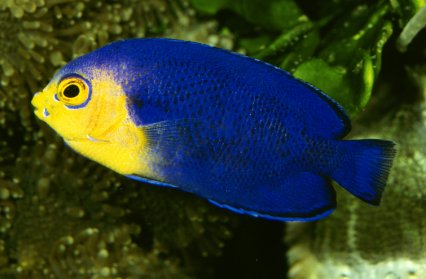 For a smaller dwarf or pygmy angel, such as the Cherub (C. argi), an aquarium volume of 150 l/33 gal is sufficient, but larger species, such as the Lemonpeel (C. flavissimus) will demand double that size.

Aquascaping for Centropyge angels, which lie in the Pomacanthidae family, needs to reflect the reef zones that they naturally inhabit. This commonly comprises areas of rubble, although these fish may also be found on the crest among Acropora corals and in the depths of the reef’s drop-off zone.

Plenty of rockwork, preferably live rock, is therefore desirable and the more caves, nooks, crannies and overhangs the better. These are territorial fish and spend much time grazing on the substrate of the reef. A mature system with ample live rock is therefore highly desirable.

A refugium or deep bed of ‘live sand’ and coral rubble may also provide the suitable invertebrate life they will consume.

Food variety is important and these angels are generally easy to feed in the aquarium. Chopped fresh and frozen meats, algae and even frozen sponge-based angelfish diets should be eagerly accepted. Small feedings at least twice daily are required.

Occasional supplementation with vitamin preparations may help maintain health and prevent disorders, such as head and lateral line erosion (HLLE).

Getting a pair of Centropyge to spawn isn’t difficult or demanding, but adequately feeding the larvae is a tall order.

All Centropyge angels appear hermaphroditic. To be precise, they are protogynous (female first) hermaphrodites. They probably start out gender neutral, then develop female gonads before reaching sexual maturity and becoming a fully-functional female.

In some species, females congregate into small harems. In others, heterosexual pairs form.

You can obtain a spawning pair or a group, but take care to prevent unwanted aggression. Best obtain juveniles and allow them to pair naturally, allowing the most dominant individual to become male. Harems can be formed, but plenty of room will be needed and harmony can’t be guaranteed!

For many species spawning takes place during a ‘simulated spring’ — created by raising temperatures to around 28°C/82°F and gradually increasing ‘day length’ from ten or so hours to around 13 with artificial lighting.

Spawning often occurs at ‘sunset’, with the angels swimming upwards and releasing gametes in the water column. Sufficient tank depth is therefore important and at least 60cm/2’ preferred. However, overall volume can be surprisingly low for an established pair, with 200-300 l/44-66 gal often all that’s necessary. In fact, great success has been achieved using simple plastic drums as spawning vessels.

The eggs are buoyant, as their oil droplet enables them to float to the surface. While collecting them is challenging in a standard reef system, dedicated set-ups employ techniques allowing the eggs to flow into collection vessels for larval culture.

The eggs hatch within 24 hours and the larvae will need a constant diet of copepods. This aspect of care represents the greatest challenge to captive rearing. 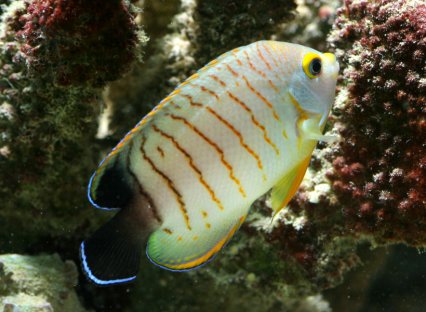 Adding Centropyge angels to the reef aquarium is always a gamble. Some species are more risky than others, loving to nibble the mantle of tridacnid clams or pecking at the polyps of LPS corals. Regular feeds, however, may dissuade such  destructive pecking.

Many an aquarist has had to undertake complete stripdowns  just to extract a rogue individual in the tank.

Take the Cherub angel, for example. Considered one of the most ‘reef safe’ dwarf angels, even here some individuals may become destructive. However, other species have behaved impeccably in reef systems for years.

Safest home is a mature Fish Only with Live Rock (FOWLR) system. Such systems provide great foraging material and are a good compromise between the sparse ‘traditional’ fish-only system and the invert-laden reef tank. 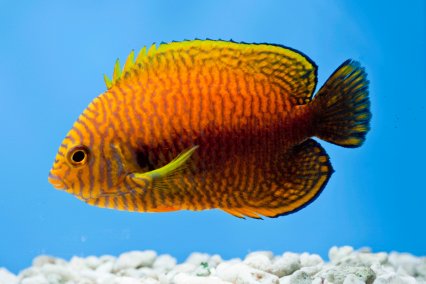 Hardiness varies between species, but Centropyge angels can be sensitive.

Damage and stress during transport can spell trouble, so ensure any potential purchases have been sufficiently rested before committing to buy.

Thoroughly inspect any in the dealer’s holding tank. Look for frayed, torn fins or signs of haemorrhaging around the fin rays. Evidence of any should be a warning.

Any fish should be alert, active and preferably feeding.

Acclimatisation should be a slow process under subdued lighting to minimise stress and quarantining is highly recommended for two reasons.

Firstly, it will provide an opportunity to treat any fish affected with parasites, such as Brooklynella or Cryptocaryon, or otherwise suffering other health-related problems.

Dwarf angels may be sensitive to copper treatment, so pay particular attention to dosage rates.

A second reason for quarantining is to allow these fish to begin feeding in a controlled environment and some seeded live rock in the quarantine system will be welcomed. 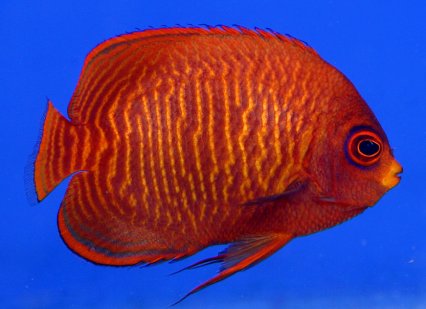 Centropyge angels are heavenly but feisty, so choose tank mates with care. Avoid larger predators, so large lionfish, big puffers and porcupines — and larger morays and triggers are out.

Similarly, overly shy species should be avoided as the angel may begin to bully them.

Keep dwarf angels with such as hawkfish, tangs, wrasse and other semi-aggressive fishes. Adding the angel towards the end of the stocking list may help limit territorial squabbling — but don’t bank on it.

Conspecific tank mates should be avoided, unless adding small individuals to create a breeding pair or group, and even heterospecifics of the same genus can be trouble. Overall, it’s safest to limit stocking to one Centropyge per aquarium. 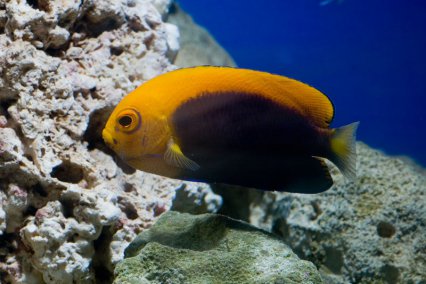 The African pygmy angel (C. acanthops) is from the Indian Ocean and has a prominent cheek spine. Reaching 8cm/3.1” in length, this has a golden dorsal surface and head marking, and a deep blue body. 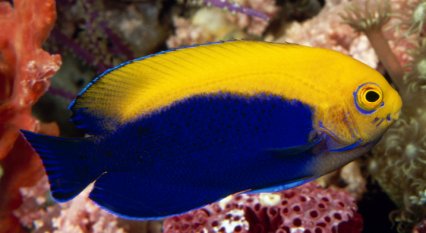 Provide plenty of rubble and at least 200 l/44 gal of volume for this angel that’s often mistaken for the superficially similar Flameback pygmy (C. aurantonotus) from the Western Atlantic. The two species can, however, be easily distinguished — C. aurantonotus having a blue caudal fin instead of the African pygmy’s gold. 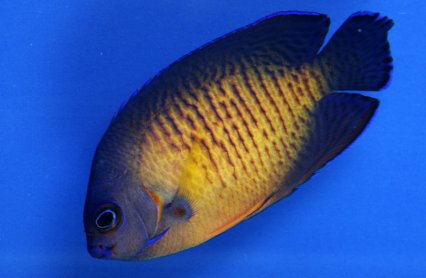 From the Indo-Pacific, the Coral beauty (C. bispinosa) is aptly named with its often deep purple and vivid orange coloration. Individuals can vary, depending on location of origin — some being almost completely blue. This enduringly popular angel reaches 10cm/4”. 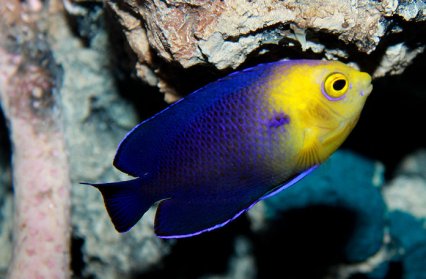 The Cherub angel (C. argi) - pictured above by Brian Gratwicke - is from the Western Atlantic, although it superficially resembles the allopatric C. acanthops from the Indian Ocean. This is one of the hardier Centropyge, although it must eat sufficient algae. Growing to 8cm/ 3.1” this can be kept in 150 l /33 gal. 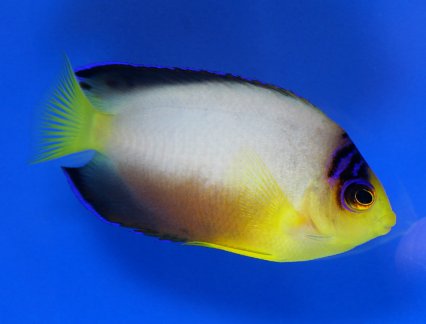 The Multicolour angel (C. multicolor) hails from the Pacific and reaches 9cm/3.5”. This species sports bizarre coloration; a combination of yellow, white, black and electric blue. Being a deepwater species and therefore difficult to capture, specimens are expensive.

This angel is surprisingly hardy and, providing that enough rocky crevices are provided, adapts well to captive life, although iffy in terms of being 'reef safe'. 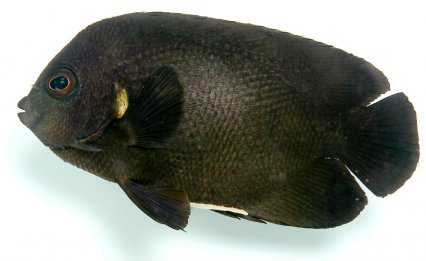 C. nox, the Midnight angel, comes from the Western Pacific and reaches 10cm/4”. It is inexpensive and, despite its uniformly black coloration, is a stunner. It is relatively shy and demands plenty of hiding places, as well as careful acclimatisation and an optimal diet. Only add to a well-established system. 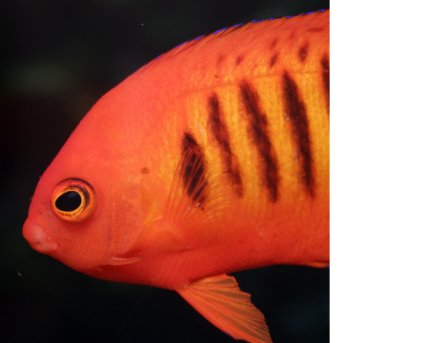 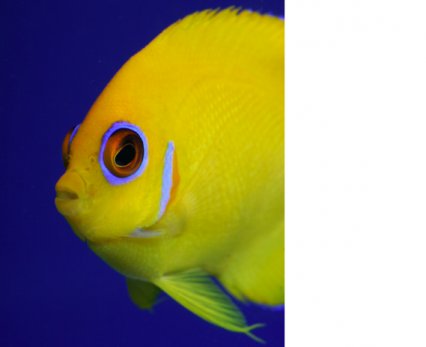 The Lemonpeel angel (C. flavissima) from the Indo-Pacific is common in the trade, but not necessarily suitable for aquarium life. It reaches some 14cm/5.5”.

Coloration comprises an overall bright yellow with an electric blue rim around the eye and blue edging on the fins — and it’s not to be confused with the ‘false lemonpeel angel’ (C. heraldi), which lacks blue markings.

Lemonpeels can be territorial, so add them last. Unless a huge amount of room is available, avoid housing with conspecifics. 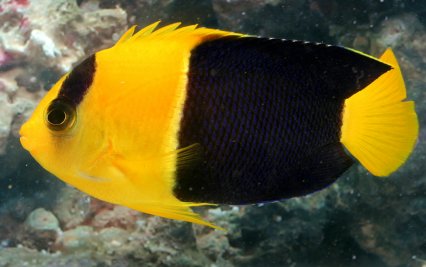 The Bicolour angel (C. bicolor) is another large, attractive Centropyge, reaching 15cm/6” and looks like a miniature Holacanthus angel. Originating from the Indo-Pacific, this species requires at least 300 l/66 gal and is a risky addition to the reef. Provide plenty of rubble in the aquascaping.