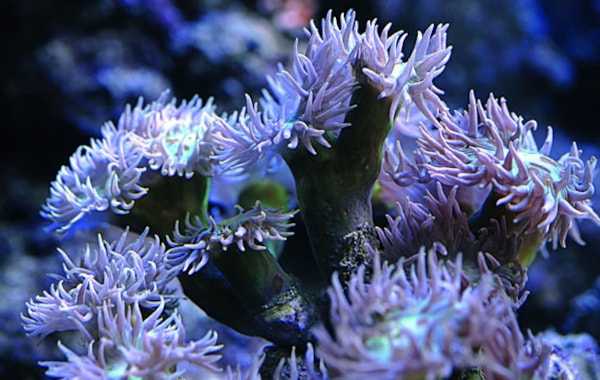 Jeremy Gay introduces the popular Duncan's coral, Duncanopsammia axifuga, an expensive and sought after LPS coral for the reef aquarium.

Requirements: Duncan’s corals live in deep waters, near sand, so in the main use blue spectrum lighting, at around 20,000K, or place them away from the main beam of a metal halide. Multiple T5 lights will be fine.

Give it adequate, but not too strong flow and light, feed regularly with frozen Cyclops, brineshrimp nauplii and proprietary coral food, and it should do well.

Place away from other LPS corals to prevent fighting.

Notes: Duncan’s corals are very popular following a resurgeance in the hobby some three years ago. The first specimen PFK noticed then was on sale for a whopping £850. Small colonies are now selling for under £100, depending on size, and some retailers are fragging and selling individual polyps for £20 or £30.

If treated right it is said to be hardy and quick growing, so buying just one polyp might not be a bad thing.

Availability: Since 2006, availability has gone from one or two specimens in the UK to being found in more or less every marine retailer. In general, wild colonies of LPS corals are not as sustainable or as easy to collect as SPS or soft corals, so buying captive-raised frags might be the way to go. Prices should continue to fall as more are grown and fragged in captive systems.