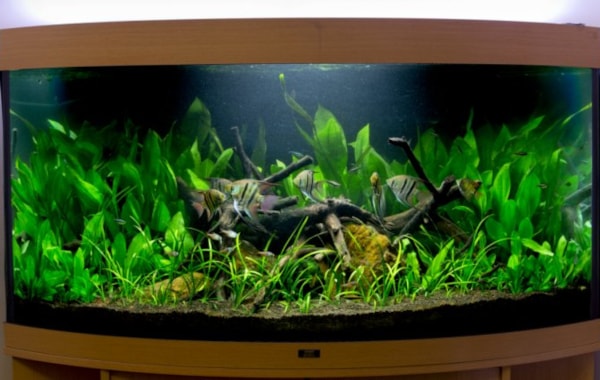 If at first you fail, be brave and start again. Nathan Hill chronicles a reader tank revamp that needed a year and a fresh approach to finally succeed.

When I penned the idea for a reader tank makeover, I had no idea how long the ride would be. The project was to ultimately spread over more than a year!

The initial plan was straightforward enough. All I wanted was a regular reader’s aquarium in need of an overhaul. I sent out feelers, threads on forums, posts on Facebook — and soon I found just the right tank!

Eleanor Woolley’s Juwel Trigon 350 was a valiant effort, but looked as if it had lost its way.

The fish were in good health, but the layout — silver sand and scattered, alternating hardscape and plants — indicated it had reached a dead end. 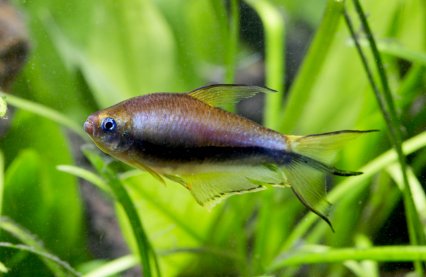 It wasn’t a shed of a tank with dying livestock and the kind of glass you find in 500-year-old shipwrecks, but at the same time it wasn’t a near immaculate aquascape with a reader just trying to get hold of some freebies.

Now all we needed was to knock heads and get it made over!

I’d wanted to get a real aquascaper’s slant, so asked PFK contributor George Farmer. He took the initial plans for the layout entirely under his wing, communicating with Eleanor about what she would want from her display and planning the best way to go about it.

Eleanor has a thing for angelfish and tetras and, given the South American feel of the aquarium, it was decided to go for an Amazonian effect. To that end we recruited Joey Abrahams of Aquadip to help with the most appropriate plants.

Where possible, George wanted lower maintenance and Eleanor concurred. It was soon decided that a mix of Echinodorus swords, along with some Sagittaria would be the way forward.

These plants, although requiring care with nutrient and light, are straightforward varieties and capable of dealing with a little rough handling and abuse.

Then it was time to reassess the hardware. Juwel systems are great all-round tanks, but often require tweaks and additions if working as dedicated planted systems.

The hardware on Eleanor’s aquarium was dated, so we decided to revamp the lighting, up the filtration, and stick on some CO2, so made some calls and soon received a bounty of goodies.

George wanted something with oomph to light the tank so we went for a combination of Fluval’s Power Glo and Life Glo fluorescent tubes. This would give a suitable spectrum for the plants but, with the refreshing, crisp light of the Life Glo, we knew we’d really bring out the colours on the fish.

We also all felt that flow and filtration could be reappraised, so pulled some strings and arranged for JBL to send a CristalProfi e1501 canister filter.

CO2 was also taken care of by JBL which came up trumps with one of its M602 sets, with a solenoid controller that we could run into a simple plug-in timer.

Finally, armed with a mix of JBL Manado substrate, as well as TMC’s Nutrisoil, we got a box of mixed Sagittaria and swords and made our way to Eleanor’s home in Chesterfield, Derbyshire. 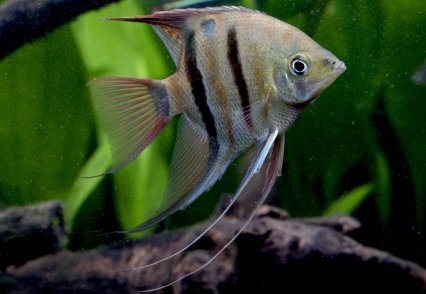 In late 2011 our first consideration was available space. The room housing the aquarium isn’t massive and is patrolled by inquisitive felines, so I couldn’t spread any gear and plants around the floor.

The first job was to strip down the existing set-up and, to make life easier, I had brought a smaller Fluval aquarium to temporarily house some of the fish.

The thick bed of silver sand was hauled out, along with existing décor and planting. Although there were some nice original bits in the tank, George had set his heart on not mixing and matching any different wood types and had brought a combination of Sumatran wood pieces with petrified wood for hardscape.

A central pile would be the way forward, with plants on the peripheries.

Nobody was spared the task of preparing plants, unpotting them, clipping roots and trimming back straggly leaves.

With George wrapped up in his aesthetic designs, Eleanor and I set to task rigging up filters, CO2 and changing the lighting. The old tubes had long passed expiry dates and when we ran a PAR meter under them in the aquarium got levels as low as three and four.

We did our best to conceal pipework and CO2 towers toward the rear, with planting helping to obscure equipment. The only hindrance was a rather ingenious cover devised by a relative of Eleanor — in part to support cat weight on the lid, as well as retaining heating.

Working around this, we eventually had things fitted.

Several hours later, having refilled the tank with colanders and hoses, and having reintroduced fish to the already established filters, we thought we were done.

We just needed to return in a week or two to take photographs. 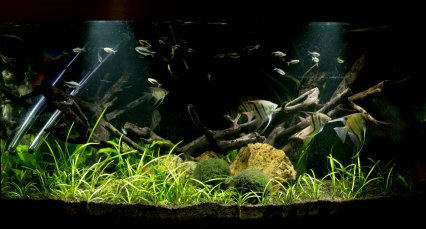 Everything started to crumble in the following period (see picture above), mainly due to my miscalculations over the time I had available.

The initial outlay did not want to take hold, despite Eleanor’s efforts.

Algal spots started to appear on leaves, Amazon swords started to wither and fade, and neither George nor myself could secure time from our Peterborough base to Chesterfield to help her.

We tried a range of ‘quick fixes’. We dosed algaecides and liquid carbon, we altered lighting and CO2. We suggested water changes, but nothing seemed to slow the decline of the whole set-up.

Things went from bad to worse when RAF serviceman George was called to Afghanistan.

Eleanor and I then realised we were on our own! 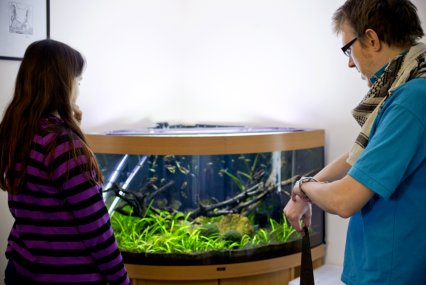 Eventually an opportunity presented itself and I returned to Chesterfield.

Aquadip again donated a box of mixed Amazon swords and Eleanor secured loads of CO2 from a dedicated gas supplier.

The basis of my emails with Eleanor had left me imagining a worst-case scenario. In the event, most of the swords had gone and the remaining Sagittaria was bogged down with algae.

A lot of the hard slog had been carried out by George a year previously, so I had no need to change substrates, no need to plumb in hardware and the hardscape only wanted the slightest tweak.

I did need a look at the lighting, however. A year of shining had taken its toll and things were starting to look tired again.

The first thing to do, though, was to address the plants and everything came out.

All the greenery went and the instructions were clear: if it doesn’t look great and the algae won’t come off, chop it off. If you need to chop it so nothing remains, bin it. 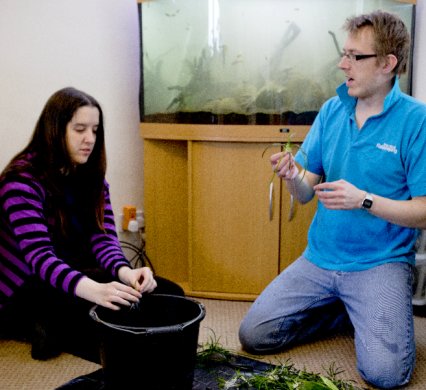 Much was binned, but what remained was showing potential. Even the photographer got stuck in, hand scraping any algae that would loosen freely. We soon had a bucket of written-off greenery — but also healthy shoots.

The Aquadip plants were unpotted, roots trimmed, rogue leaves removed. This time we were going for a simple yet dense layout.

I re-jigged the hardscape and we started planting up the classic way; short plants in the front, working to the largest at the back.

We’d set our hearts on something more chaotic and natural than buff and aquascapey, so a little disorder was appreciable. After all, we just wanted the fish to look and behave naturally.

Without excess aesthetic planning, planting was done in record time, the Nutrisoil/Manado base taking to the roots and pinning them down in spectacular fashion. After a quick refill, dechlorination and topping up of water we’d removed to make life more bearable, we were ready for more fish and new lighting.

A jaunt around a couple of local stores produced the lighting needed — a brace of Interpet’s Tropical and Colour enhancing high-output T5s. 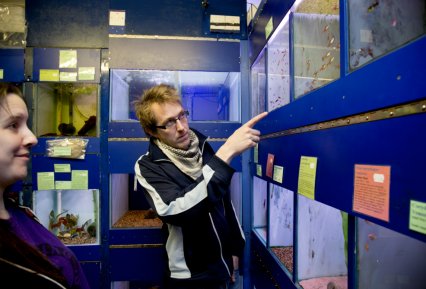 Eleanor wanted to continue with the South American Community theme, and so we hunted fish to suit. She already had some stunning Pterophyllum leopoldi, along with a single scalare missing a ventral fin and given a nickname I couldn’t publish here for legal reasons!

Also in the aquarium were Black neon tetra, very adult Emperor tetra, and a handful of Otocinclus. 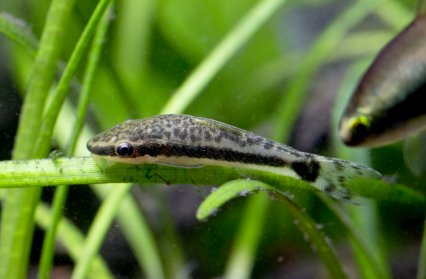 Eleanor was sold on some Flame tetra to complement the darker hues of the existing fish, so we picked some. We also wanted to shore up numbers of Otocinclus to help keep on top of algae growth on leaves.

To add vibrancy to the base, we wanted to add some Corydoras species. It wasn’t long before a few plump C. sterbai waddled in to view and it was a done deal.

Having had success with Estimative Index many times and having it seen put to such good use elsewhere, I called on the guys at Aquarium Plant Food UK to despatch a kit — which they did, along with a new glass drop checker to ensure correct dosing of the CO2 Eleanor would be using.

Almost a year on, the tank is full of plants, fish, CO2 is bubbling, plant food ready for daily dosing and all of it under fresh lighting! 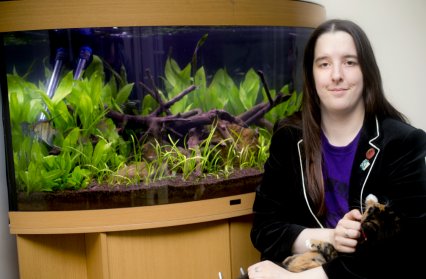 We love to get inside the minds of other fishkeepers, so it stands to reason I’m not letting a chance like this pass!

I wanted to find out what the fascination with fish was for Eleanor, and this is what she had to say...

"When I was younger, I had surgery on my spine for a curvature, it involved my back being broken and having to heal. I had to rapidly learn to walk again - the "big" goal was to walk to the end of the ward so I could see the fish tank. Then I could go home. You have no idea how much I wanted to finally see that fish tank. Call it utter mush, but aquariums bring a real sensation of freedom and happiness for me."

Asked how long she’s been keeping fish for, she tells me: "About six years. I was desperate to have an aquarium, so going to uni was my opportunity to do it uninterrupted. I went out and got a good old Clearseal 45cm/18”, a tiny heater and a Stingray filter so I could keep White Clouds."

Given the latest project here, it’s safe to say that Eleanor is definitely geared as a more serious aquarist. When we first started the makeover the tank had very different inhabitants - three angelfish, a Kribensis and a handful of mollies.

Now, with her enviable collection of South American fishes, she has a tank that many of us would be proud to aspire to...