How’s the learning curve coming along for you? Nathan Hill looks at some of the most common blunders made by aquarists — both new and experienced!

I’ve kept fish for 35 years now, and every week I learn something new. The worst mistake any of us can make is to think that we know it all, and that we have nothing further to pick up.

For some of us the curve is gentle. For others, it’s a hairpin, leading to costly mistakes, dead fish, and frustration. Some aquarists may find themselves snarled up against a problem that requires thorough investigation. But there are also folks who are doomed to make life hard by overlooking some simple, easy to rectify measure.

Here’s a breakdown of some of the most obvious blunders and gaffs that fishkeepers — both old and new — are prone to making. Avoid them at all costs... 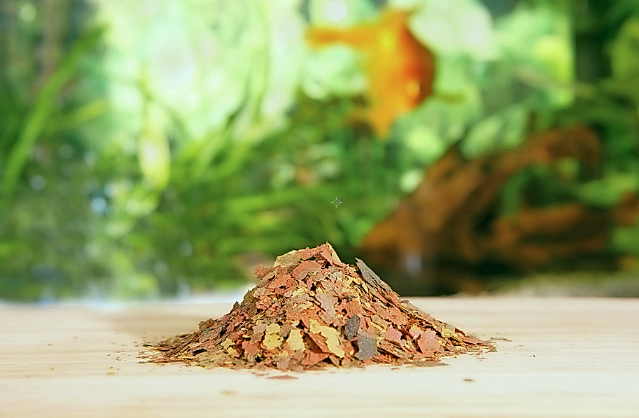 Imagine I trap you in a bathtub, but don’t let you out to use the toilet. The more I feed you, the sooner that bathtub’s going to turn foul. It’s just the same with fish.
Unless you’ve a demanding predator, then your fish (and your filters) will benefit most from small, regular feeds instead of big, random splurges.
Offer a little bit of food and see if they can eat it all in 30 seconds. If they nail it all in ten seconds, you’re not adding enough. If it takes them a minute, you’re adding too much. The trick is to find that magical quantity that will allow a 30-second feed at a time, and then add that amount three times in a row, allowing for a 90-second feeding time in total. Remove any uneaten food afterwards with a net. 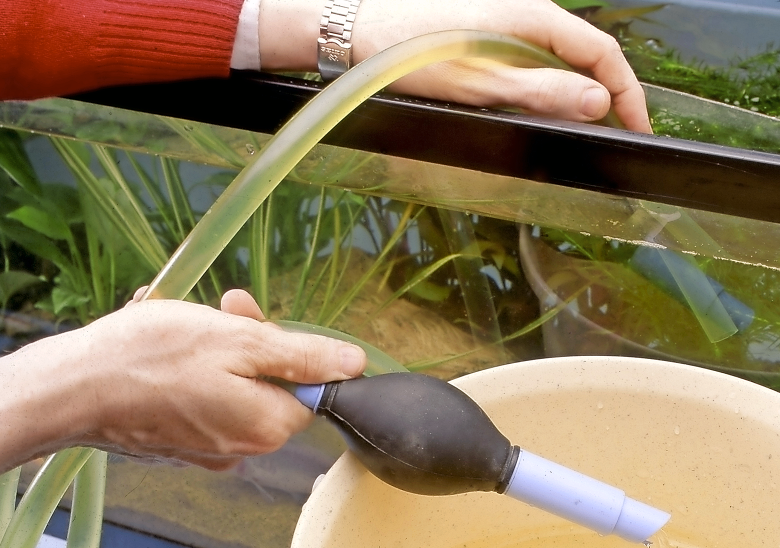 Simple syphon starter bulbs are much safer than sucking on the end of the pipe!

I’ve spent enough time curled up with stomach cramps to learn this one for all of us. Do not suck hoses to start syphons. You’ll get ill. It’s that simple.

So how do you start a syphon? Consider buying a gravel cleaner with a non-return valve in it. That way, you just bounce the device up and down in the tank, and the water will flow out for you. Alternatively, get a model with a hand-powered pump to start it. Or splash out and get a battery powered model to start the water movement off for you.

Just do not suck on the end of a pipe, I implore you. 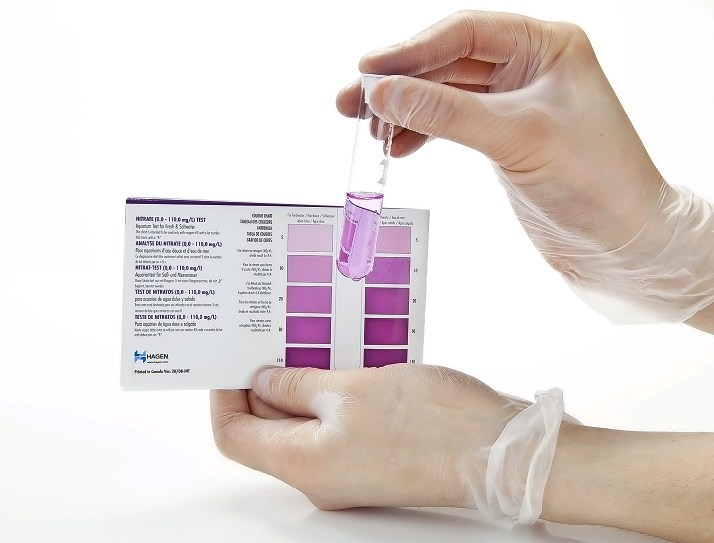 Always test your water before you medicate.

Most of us are savvy about this, but some people still refuse to accept that they might be directly responsible for the problems in their fish.

Water issues and illnesses go hand in hand, and it’s rare for aquarium fish to go down with disease if there’s no pressing issue of water quality. The symptoms of the two camps look very similar. Gasping, lethargy, dashing, slimy skin, cloudy eyes, poor colour — all of these are more likely to be the result of pollutants than pathogens. 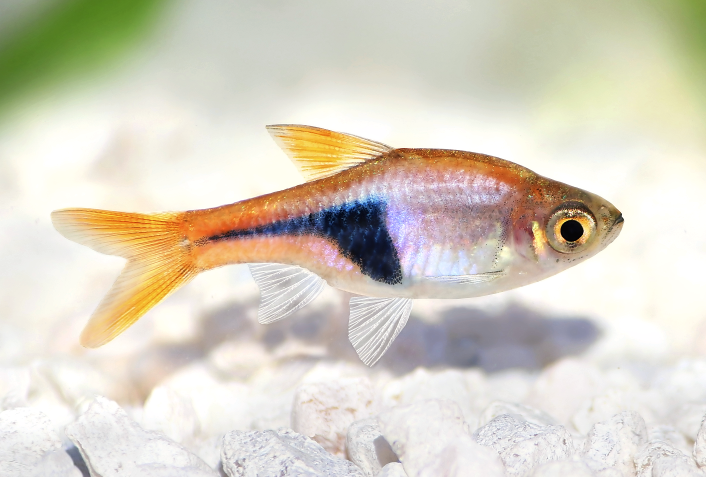 Always buy as large a group of shoaling fish as possible.

Having shoals that are too small

Some fish are destined to do badly by virtue of being constantly nervous. Shoaling fish are gregarious by nature, and their whole life cycle may depend on their interactions with others.
In the wild, barbs and tetras may live in shoals of hundreds at a time. In those shoals will be complex hierarchies, social ties and breeding opportunities. When kept as three individuals in a tank, all of this innate social programming is redundant.

That could mean shy fish, hidden away, refusing to eat and slowly starving. Or in the case of others it may lead to fin nipping, as fish try to interact with different species as they would their own kind.

Always buy as many of one kind of shoaling fish as you can afford or accommodate. Mixed shoals, and the pick-and-mix option might be great for bags of Haribo, but this approach won’t work with sensitive animals. 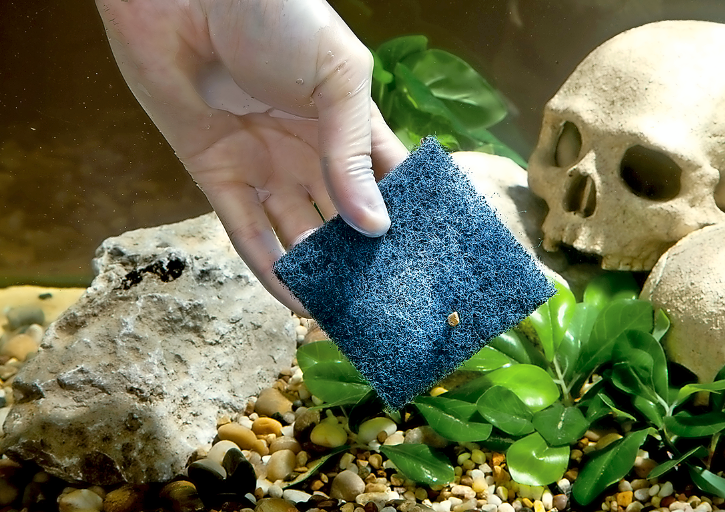 That piece of gravel trapped between the algae pad and glass is going to leave a mark...

I’ve seen acrylic tanks reduced to tatters in seconds, simply through the use of a badly maintained algae pad.

A piece of grit or gravel is like a diamond cutter once you start rubbing it against the front pane, so make sure you check your pad before and after each use. Rinsing beforehand is essential, and inspect closely. It may sound excessive, but when you’re cursing that 20cm/8in gash in the front of your tank, you’ll understand why you should have done it.

Also, as a pro tip, rinsing algae pads after use is a great way of controlling any pathogens that they might collect. 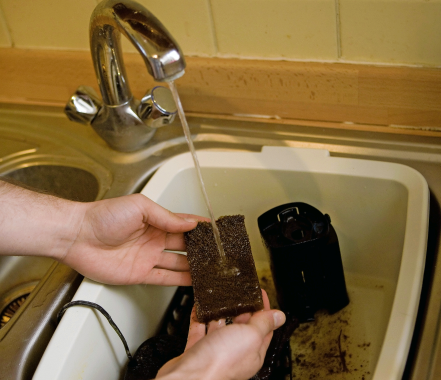 If you’re new here, then this will be one of the most important things to take away from the magazine. Do not wash your filter foams under the tap. The foams contain bacteria, and those bacteria are helping to keep your fish alive by converting harmful wastes. Treat the foam more gently than a newborn puppy, bathe it softly in old tank water, and never, ever expose it to any kind of disinfectant.

Ever had that moment where you’ve cleaned your external filter, spruced up the foams, plugged it all back in and been greeted by a puff of white and brown bits blasting through your outlets? Annoying, huh?

Biofilm develops in lengths of hosing, and the on/off action during maintenance will loosen it. Clear pipes will develop algae, and trap mulm, too. Eventually these build ups can impair flow, so they need addressing.

Clean your pipes every other time you open the filter. You can buy brushes to get inside them, but I’ve always found that a purge with hot water and a funnel down the sink does the job just as well.

Using one net to catch fish

Catching fish with a single net is stressful for the aquarist and the fish. Professionals struggle, amateurs make a total ham of it. Use one net as a sheepdog to encourage the fish into the other.

Some experts claim success with different coloured nets, using a small, blue net to chase fish into a larger, green one. Others insist that fish are easiest to catch with red nets.

More importantly, get the right size. For average, 2–7.5cm/0.8–3in fish, opt for a net with a 15cm/6in width. Tiny nets are of little use for anything bigger than slow fry, while bigger nets may seem intuitively better for catching, but in practice turn out to be slow and cumbersome.

Also, if dealing with bracer bars or odd shaped tanks, bending the net can make the job considerably easier. 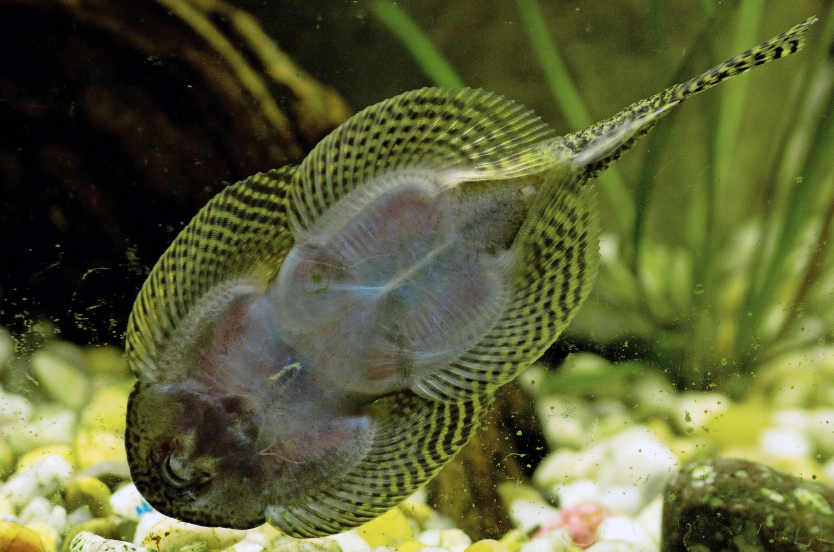 Always check the dietary needs of any fish you buy.

Your catfish don’t clean their tanks any more than my dog hoovers my floor. Most of them have more specialist diets than the tetras and barbs swimming above them, so scraps simply will not do. Emaciated looking catfish are unlikely to be suffering internal parasites, but very likely to be undernourished. Find out what they eat, and supply it.

By the same token, don’t assume that any fish with a suckermouth is a herbivore. Many of these species, all too often euphemistically labelled as ‘algae eaters’ are devoted carnivores that prefer snail meat and other aquatic inverts, while others grow huge. Review all fish on a case by case basis, and provide the diets they need.

Medicines, tonics, salt — everything! We are a nation of overdosers when it comes to fish, without realising that too much can be more harmful than not enough.

Some tank manufacturers exacerbate the problem by stating displacement volumes instead of actual volumes. So if you buy a tank advertised as 100 l/22 gal, it may in reality hold only 85 l/19 gal of water once you’ve added the substrate and decor.

Calculate easily, and do it for yourself. Measure the length, width and water depth
in centimetres and then get a calculator. Follow the calculation below and you’ll be fine: Length (cm) multiplied by width (cm) multiplied by water depth (cm). Divide that number by 1000 and you have the volume. Multiply this number by 0.9 to deduct 10%, to account for displacement due to substrate and decor, and you have the treatment volume. 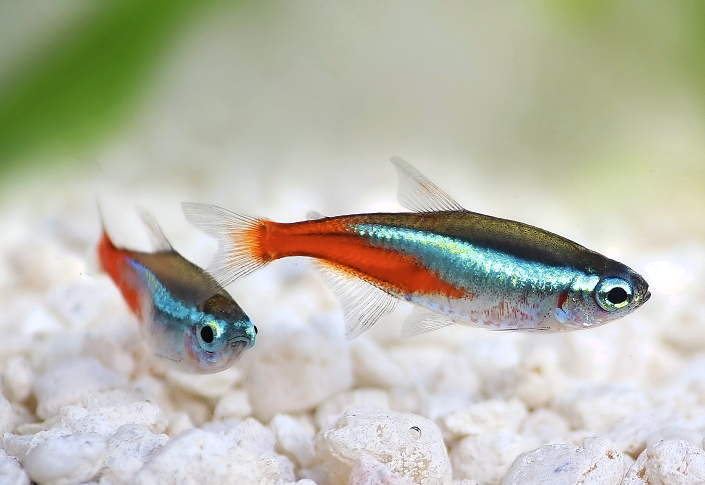 Assuming all tropicals should be kept at 25°C

The word ‘tropical’ has a connotation with being a very particular, set temperature.
The reality of the world is different. Some tropical fish come from high altitudes, or low ones, where the temperature can be far from 25°C/77°F. Some live in open, sun-exposed areas, while others huddle under dense, shaded canopies. Some live in deep holes in the ground, or caves.

A temperature of 25°C/77°F is a fair balance for many popular species, but even very common fish like Neon tetra like things cooler, and live shortened lives in hotter climes. 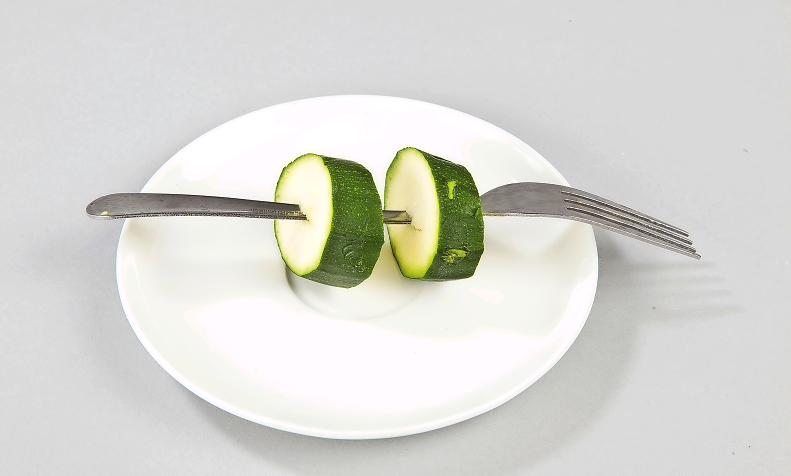 Simple snail trap using slices of veg as bait, and a saucer.

Thinking all snails are bad

The presence of millions of snails is bad, but the snails themselves are amoral, and often helpful agents, just exploiting an easy food source.

There’s a balance. Snails eat debris and detritus in a tank, along with algae and dying plants. They love it. They thrive on it.
The simple equation is the more snails you have, the more food there must be available for them. And the more food they have means that you as the owner and cleaner of the tank are doing something wrong.

Five point snail-eradication plan
1. Clean the gravel thoroughly. Remove uneaten food and mulm.
2. Go through your plants and remove any struggling leaves.
3. Review feeding levels. Are the fish leaving food uneaten?
4. Purchase a snail trap, or use a saucer with snail bait.
5. Purchase some Assassin snails to eat the stragglers.

DO NOT be tempted to:

We all love to nurture the weaklings from a brood — it’s a part of our inbuilt nature as humans to take sympathy on small, struggling things. Look at why puppies and kittens are so popular.

With fish, you might be taking on an impossible task. A fish that lacks fins and cannot swim properly may have a terrible quality of life, may be pecked by tank mates, or may miss out in the competition for meals.

Or you could be inviting disease in to the home. Some deformities can be caused by viral tumours, internal parasites or bacteria. What might look like a cute one-off quirk in a store
tank could be a festering hamper of illness waiting to strike your aquarium.

The sad fact is that fish often have so many young to account for the runts, also-rans and outright failures. When you keep one of those runts alive, allow it to reproduce, and pass on the young, you’re just subjecting others to the same problem later down the line.

What to look for when buying fish: 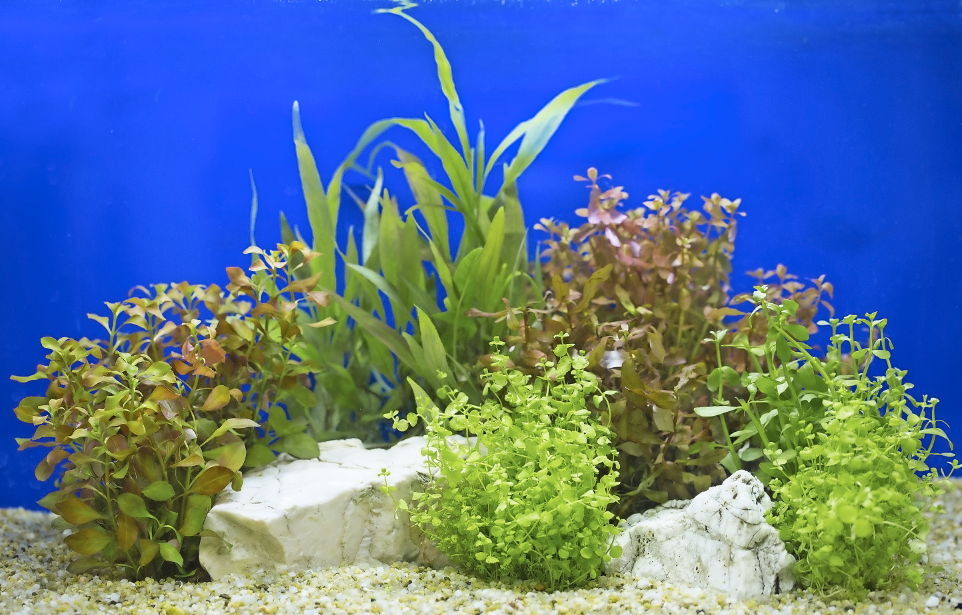 Gravel is too harsh a substrate for most plants.

This is up there with buying houseplants as aquarium plants. Keep a plant badly, and it’ll die. Before it does, it’ll feed a plethora of snails and release all manner of waste into the water.

For most species, gravel is not conducive to growth. Potted plants may tolerate gravel for a while, but eventually even they will find the substrate too harsh.

If you are stuck with gravel in the tank, you can at least make ‘plant boxes’ using a margarine tub. Fill the tub partway with plant friendly substrates, place it in the tank wherever you want growth, plant greenery into it, and then hide it by covering with a thin layer of the same gravel in the rest of the tank. The plant roots will be happy, and observers will be none the wiser.