Discus: The whole truth and nothing but... It's high time the facts were separated from the fiction, about Discus. Mark Evenden dispels some long-held myths about these iconic South American favourites.

Beliefs passed through the hobby may not be necessary, beneficial or even accurate - as you'll discover:

It's said they need RO water

All Discus will live in water prepared by a reverse osmosis filter - but do they all need it?

Much will depend on the water your fish have spent their lives in prior to reaching your tank.

Wild Discus will require soft, slightly acidic water and generally the only way to achieve this is to use a reverse osmosis filter. Some areas of the UK have soft water on tap, but, even then, it would be wise to run it through carbon.

Asian Discus are also raised in soft water, so will appreciate the same water preparation for wild Discus. Some aquarists acclimatise their Asian Discus to UK tapwater, but top breeders such as Jeffrey Tan advise soft water.

European-bred Discus, however, are quite happy and will even breed in harder water - the reason being they have now been tank-bred over several generations and have adapted to it.

Your best course of action is to seek the advice of your chosen Discus supplier, but an increasing number of keepers are considering an RO filter a product very much of the past. 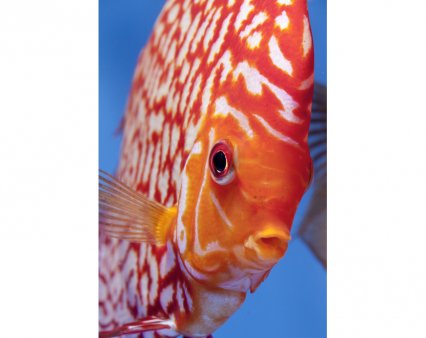 In my opinion the answer is no, but if that didn't happen the hobby would grind to a halt.

Keeping Discus successfully is made easier by eliminating the known risks and there's conclusive evidence that sometimes, when two batches of fish from different sources are put in the same tank, it can have devastating results - with one set becoming very sick in just a few days.

I need to stress that this is not an Asian/German 'thing', as it's often referred to in the hobby. It can involve two batches of fish that have simply been purchased from different shops.

So how do we avoid it? Don't do it! However, if you want fish from different places then there's a simple procedure to follow.

Usually people will have a happy tank, go out, buy some new Discus, pop them in the tank and 48 hours later notice a problem. So keep your fish in separate tanks while the newcomers undergo a period of quarantine.

During this time avoid transferring even a single drop of water from one tank to the other.

After a few weeks take a new fish and an existing fish and put them in a tank together. If after ten days they are fine you can reasonably assume that all is well.

If the fish are going to 'cross contaminate' it will show itself within a 48 to 72 hour period. This is generally referred to as 'Discus plague' and can be treated,  although not always successfully, using salt dips/formalin and malachite green/acraflavin.

Yet is the risk worth the worry? Only the individual fishkeeper can decide, My advice, however, is to avoid known risks. 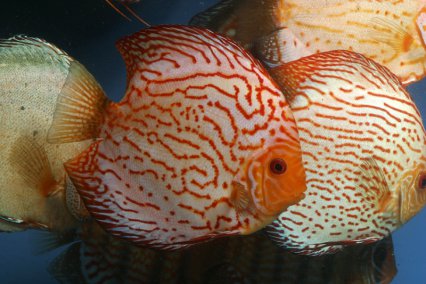 In the main, wild Discus do have bright red eyes, so some fishkeepers consider a red eye a must characteristic.

However, most Discus available today are domestically-bred mutations and the eye can be yellow/red/albino and so on.

Regardless of the colour, always pick fish that have an eye proportional to body size. It should also look clean and bright, as the eye is a good indicator of the fish's state of health and age.

Sometimes but not always. Discus fins are like fingernails, continually growing and 'dropping off'  - not literally, but the fish is able to replace the soft areas of its fins.

I believe the size and shape of the fins is directly linked to fish genetics, the quality of the diet and water provided for it.

Males, when breeding, do often have longer ventral and dorsal fins than females, but I believe this characteristic is more an indication that the fish is in good condition than anything else.

They must have a very low pH to survive

Discus will survive in a broad range of pH values and again the origin of the fish will need to be taken into consideration, but it is indeed a myth that the pH in the wild is constantly very low.

During the rainy season the water in rivers and lakes will have a near neutral pH.

Far more important for domestic Discus is a consistent pH - and nearer to neutral the better.Constant adjustment of pH in water is poor husbandry and will inevitably lead to health issues. 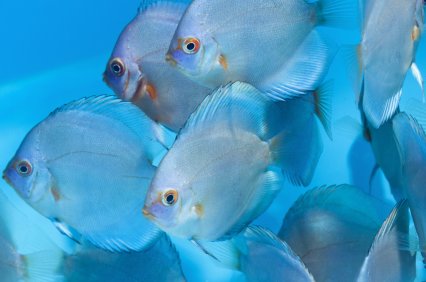 Don't feed them beefheart because it's not natural

Nonsense. Most of the world's Discus breeders feed a beefheart mix and, in some cases, have done so for more than 50 years.

Feed your Discus what you see fit and offer a varied diet, as feeding is part of the fun of keeping fish! People often say "I wouldn't want to eat the same food every day" — but we eat to survive and for pleasure. Animals just eat to survive.

Feeding Discus is a subject on which every keeper will have an opinion, usually different!

Discus will only accept red foods

No. Discus will also happily accept brineshrimp, mussel, whiteworm and so on.

Fish use more than just their sight to locate food, but there's a school of thought that, because of their colour, red foods are much easier to see. A well-known brand of granulated food was initially produced blue, but trials indicated that a red version was eaten first, so red was promoted!

Healthy, happy Discus will eat a variety of food, the important factor being to feed them regularly and in sufficient quantity.

They need to be given bare bottomed tanks

Discus don't, but they are messy and people who keep them in such tanks usually do so for their own reasons.

It's easier to remove the waste, wipe down the sides and generally keep bacteria and pathogens minimal, but in a domestic setting people will often want a decorated tank with substrate and aesthetically that's quite understandable.

Maintain it properly and all will be fine. The most important regime is to remove uneaten food. 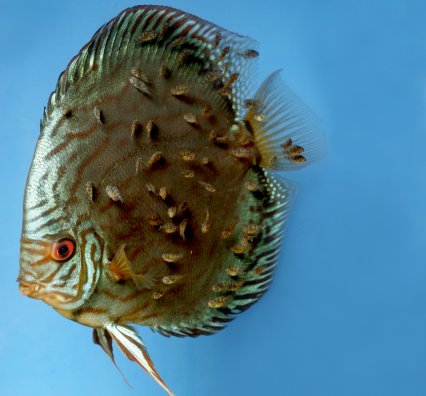 This is a very hot and complex subject, but extensive tests would appear to disprove this 'myth.'

They can be sexed just by looking at them

Even adult Discus are hard to sex just looking at them. Getting it right all of the time is impossible. Watch their interaction and it becomes easier.

Spend some time looking at the 'tubes'. Males' are pointed, females' shorter and blunt.

One thing's for sure though. If a pair forms in a tank it is blatantly obvious, as they will shove the rest of the fish up the other end!

Sexing Discus under 14cm/5.5" is all but impossible.

They can't ever be sexed just by looking at them

As you gain experience you get an instinct as to each fish's sex, but getting it right is difficult and at some point they will humble you. 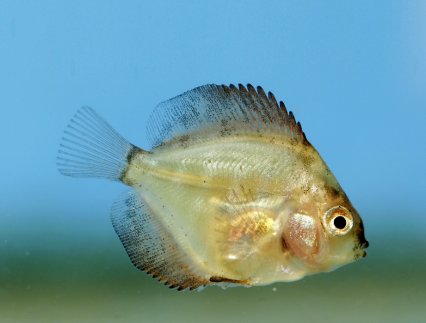 You shouldn't buy small ones

It's not a good idea to buy small Discus in groups of less than eight to ten — the reason being that Discus are shoalers and get their security from being part of a shoal. Would-be buyers often say they will take 'a couple to try them' but this really is the wrong way to keep Discus. 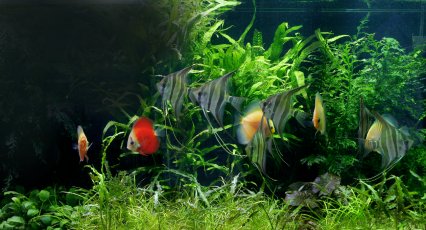 They shouldn't be mixed with angelfish

Discus don't live with angels in the wild, but many enthusiasts keep them together in domestic aquaria.

As with any fish, there's a risk of cross-contamination and with both being territorial and, in the case of the angels being predatory, there's a potential problem. My doctrine is, as ever, to avoid known risks.

These fish are very difficult to keep...

You can make Discus keeping as hard as you like! People do, but those who enjoy the best success and relish in the hobby will in the main keep things very simple. Domestically-bred Discus are really no different to any other fish and these are the very basic rules: 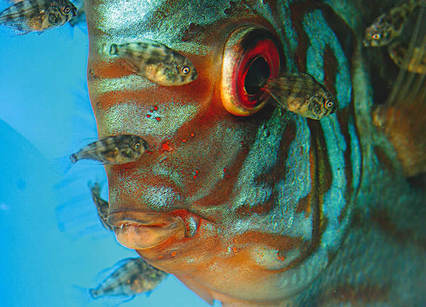 There are many opinions and different methodologies seem to work for different Discus keepers.

With better fish quality now available, water preparation filters being more affordable and with knowledge gained and shared in PFK and on the Internet, it's possible for anyone to keep Discus.

No more mystery and secrecy — just follow these tips:

Tank size: Bigger is better, as more water makes it easier to maintain quality. If you buy smaller Discus the more water you will have and the better they will grow.

I think a 120 l/26 gal tank is minimum and, with prudent husbandry, one fish per 20 litres of water is fine.

Water parameters: These will depend on the source of your Discus, so discuss the finer points with your supplier. However, the common denominator for any Discus is to provide chemically clean water — and plenty of it.

Discus like it a bit warmer than bread and butter tropical fish and 28-30°C/82-86°F is fine. Discus will not tolerate ammonia or nitrite for very long. They are more tolerant of nitrates, but keeping this as low as you can with water changes is extremely benefical.

Size to buy: This will again depend on several factors, not least your budget! With most Discus being mutations/hybridised, the bigger they are the more sure you can be of what the fish will ultimately look like.

What you see is what you get with fish 10cm/4" and larger. When buying smaller look more for good shape and activity. Buy those constantly looking for food and allow them to develop into what they are.

Avoid shy fish and always ask to see the fish feeding before buying. Take home a group, unless adding to a collection or buying a breeding pair.

Filtration: A mature sponge filter will do the job, but an undertank sump or canister filter will be more efficient at removing solids.

Water preparation: The water needs to be chemically clean and free of chlorine, chloramines or heavy metals. Reverse osmosis or HMA filters are the most economical way long term. Over-the-counter additives remove and bind these factors, but use a carbon-based filter for best results.