Heiko Bleher explains how the three species of Discus vary and identifies their natural nutritional needs.

Although precise distributions of the three species and variants of Discus were highlighted in part one of this guide, there are variations within each one of those species.

Symphysodon discus, the Heckel Discus, is the only one I found that repeatedly hybridises in nature. It does so in at least three locations: one being near the mouth of the Rio Nhamundá where the very acid and extreme soft river enters the almost neutral Lago Nhamundá.  This is also home to different variants of the Brown and Blue discus (S. haraldi).

Those two species possibly meet and some may cross breed during extreme floods at this meeting of the waters.

I also found an overlapping of habitats in the Jatapu river where it enters the Uatumã river. S. discus live in the former site and S. haraldi the latter.

There’s also the Rio Marimari tributary of the Abacaxís where, during extreme flooding, Heckel Discus can possibly meet with S. haraldi (Brown or Blue variants) where it connects to the Canumã river system.

Natural hybrids only occur when extreme high waters arrive and such natural hybrids have bred perhaps only once or twice. These creatures are almost aways sterile.

So far no natural hybrids of Green Discus (Symphysodon aequifasciatus) have been recorded. However William Crampton published in 2008 some findings of Blue Discus and Green Discus  living in parts of Lake Amanã practically together. They were collected in almost the same spot — but no hybrid was visible.

I had previously only collected Blue Discus from this lake.

In the most western distribution of the Green Discus, I found some specimens in lakes of the lower Juruá, which show similarities with Blue Discus.

Symphysodon haraldi, the Brown and the Blue Discus, do occasionally hybridise in nature, during extreme floods when they may overlap in the areas mentioned. However a natural cross of S. haraldi and aequifasciatus was not known until today — even though there is, besides Crampton’s discovery of overlapping with S. haraldi, an ‘almost’ meeting point of Blue and Green Discus. 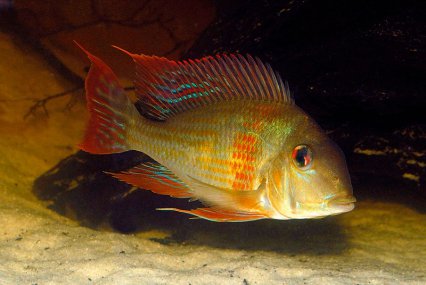 What fish live with Discus?

I always noted the fish species and genera I also netted when taking Discus. I also tried to see far enough underwater to find the real companions of Discus, which are their visitors — and enemies.

The genera and species which live with them most frequently are Pterophyllum scalare and P. leopoldi, Geophagus spp. (pictured above) and Acarichthys heckelii, Satanoperca spp. and Biotodoma spp.

Heros spp was in almost every netting, then Hypselecara spp. and with Heckel Discus there were mostly Hoplarchus psittacus and Uaru amphiacanthoides. Mesonauta spp. was found almost all the time above the Discus, then followed Chaetobranchus and Chaetobranchopsis spp.

Of the peaceful visitors — groups or individuals which sometimes moved with the Discus group — most often seen was Crenicichla spp. These were usually the larger ones which come in small groups, like C. marmorata, C. albopunctata, C. geayi, C. johanna, reticulata and C. saxatilis. 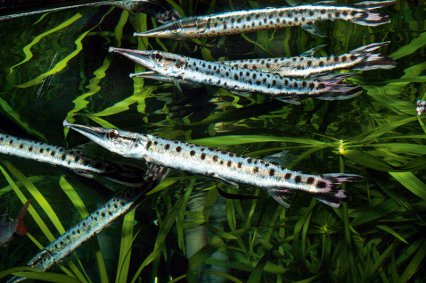 The top swimmers of the upper regions which visit Discus habitats in groups are: Boulengerella spp. (pictured above), Chalceus spp., Triportheus spp.,

Then there are frequent bottom visitors, such as the peaceful freshwater stingrays Potamotrygon spp. and Paratrygon aierba.

Small fish species rarely live alongside Discus as it is too deep for them, so their habitat is frequented by larger predators. Those are primarily Pristobrycon spp., Pygocentrus spp., and Serrasalmus spp., and they normally try to bite the alpha animal while its group flees and tries to find shelter.

The Acestrorhynchus spp., with its needle sharp teeth also tries to bite, especially the lower tail portion, and the Catoprion mento eats their scales. That is why some scales grow backwards on the alpha animal and also why wild Discus are damaged so often…

What do Discus eat?

I have examined hundreds of specimens during many years and stomach and gut contents among wild Discus indicate an order of precedence: detritus, then plant material (flowers, fruits, seeds, leaves), algae and micro-algae, aquatic invertebrates and terrestrial and arboreal arthropods.

The Amazon has adapted to nature for fishes during millennia of evolution. Plants of the tropical rainforest have little water and cannot flourish during the dry season so cannot waste energy. The same happens to most freshwater fishes.

During the dry period, with a much reduced water level and hardly any food source — except for predators — many fish starve or feed on the little available, usually detritus.

Discus and many other fishes eat what they can get, but have to be constantly aware of carnivorous predators.

During the six to nine months of floods, almost all trees and bushes, flower and have fruits and seeds — which is the main nutrition of roughly 75% of all Amazonian fishes.

The adults, and babies which grow to adults in that period, can then fill their stomachs and guts.

The carnivorous predators starve as they cannot find their prey in the huge water masses.

I have found the following percentage of nutrition in each one of the three species:

If you look closely to the habitats featured previously and their chemical water parameters and nutrition, you can understand why I suggest separating each of the three species.

Definitely never mix wilds with tank-bred Discus, as these are fish that are simply worlds apart. 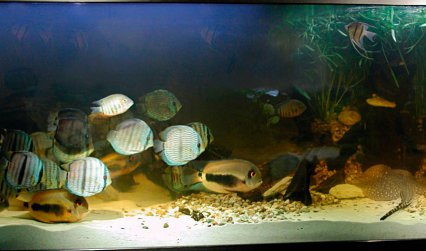 Try for no less than five or six and allow each adult at least 40 l/8.8 gal. Add white sand, even powder sand. Have driftwood watered for weeks, if not find large driftwood. Add floating plants as found in nature and if you want submersed varieties place a few in the background, like Echinodorus bleherae, or large Cyperus helferi.

These fish need shade, so never place the aquarium where people walk by constantly or near doors, and not in direct sunlight. Yet, if a beam hits occasionally you’ll see brilliant colours that only the sun can bring it out.

For tank mates I suggest at least three Geophagus spp., or Satanoperca spp. and four or five larger P. leopoldi or P. scalare  — the so called Rio Negro-Altum. Also try three Uaru amphiacanthoides and up to five Mesonauta spp. They will fill the top layers nicely.

Heros, Hypselecara and Biotodoma wavrini are also worth adding to the mix.

If you want some catfishes, choose some mentioned earlier, but do not overcrowd the tank.

A powerful filter with peat is important, but ensure the flow is never strong. I also suggest HQI hanging lamps. 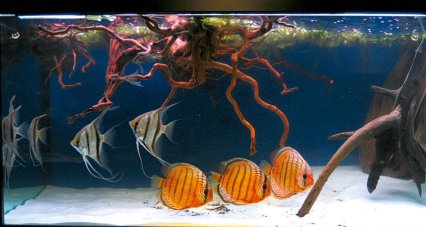 Have no less than five or six and allow 40-50 l/8.8-11 gal for each adult. Place white or beige sand and again well-watered driftwood. If you cannot find large pieces, add floating plants like Pistia stratiotes or Eichhornia spp. Utricularia spp. is always nice and try using Echinodorus and/or Cyperus spp. in the background.

Ensure the fish have shade and place the aquarium in the same position as for Heckel Discus.

For mates go for at least three Geophagus spp., Satanoperca spp., or Biotodoma spp., and four or five larger P. scalare  — those that sell as Peru-Altum in the hobby.

I would again try three Uaru amphiacanthoides and perhaps five Mesonauta spp., Heros and Hypselecara. spp., and maybe some larger hatchetfishes like a group of Thoracocharax or Gasteropelecus spp.

If wanting catfish, choose from those mentioned but I suggest larger loricariids, and never Hypostomus spp.

This set-up also needs a powerful filter with peat changed once a month, but ensure that the flow is never too strong. Again go for HQI hanging lamps.

Similarly, have not less than fve or six specimens and allow each adult 50 l/11 gal. Use fine white or beige sand. If wanting rock only select a few round, white ones for a corner.

Have watered driftwood and, if very large wood is unavailable, add floating plants as found in nature. If wanting submersed ones place a few in the background, like Echinodorus bleherae or large Cyperus helferi. You can also add one very large or two water lilies, Nymphaea sp.

For some shade, use floating plants if you have no Nymphaea and position the aquarium as with the other species.

Brown and Blue Discus are not as sensitive as the other two species, but avoid stressing wild fish, especially during the first weeks.

Try to get three or four Leporinus fasciatus and Boulengerella spp. like B. maculata. Again select catfishes as mentioned but don’t overcrowd.  A powerful filter with peat is again important, but ensure flow is never too strong. Go for HQI hanging lamps.