Definitive guide to Discus: part one Discus secrets revealed as Heiko Bleher identifies the three species of this favourite from the Amazon, describes their habitats and reveals how to tell them apart.

There are now three recognised species of Discus and they were collectively noted for the first time by Géry and Bleher in 2004, by Bleher in 2006 and than again in the scientific journal aqua, International Journal of Ichthyology Volume 12(4) by Bleher, Stölting, Salzburger and Meyer, 2007.

Other more recent scientific papers have also concluded that there are three species, according to molecular research.

They are Symphysodon discus, Heckel, 1840 (Heckel Discus); S. aequifasciatus, Pellgrin, 1904 (Green Discus) and S. haraldi  (Brown or Blue Discus). Their scientifically valid classification can also be seen at the online source of taxonomy of fishes at the California Academy of Science website by William Eschmeyer.

Every other name still found in some popular and scientific publications, in some on-line forums and on sites is a synonym or nomen nudum — meaning a ‘naked’ name not yet published with adequate description.

The common names could be argued over, but we have retained them because they were established by Harald Schultz (1959) and Leonard Schultz (1960), although the colour names do not often reflect the actual colours of the species.

John Randall, one of the most famous living ichthyologists once said to me: “We have to give it a name…” and, as they have been established for some time, we have to get used to the fact that a Brown Discus and a Blue Discus are both one and the same species. They are found throughout their distribution together in many different colour patterns.

Their common names should begin in capital letters – a form adopted in Australia — and I think Europeans should do the same.

How to identify the three species 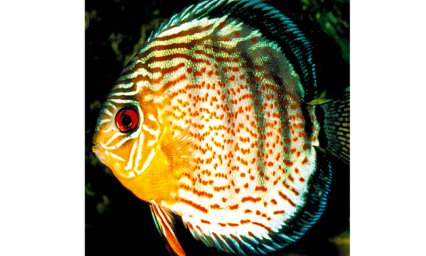 The Green Discus must also have nine bars, but almost all of uniform intensity. It must have spots; striking rust-brown to dark red ones which may range from just a few to all over the body — mainly in alpha animals — and may create a broken or continuous pattern of rows. 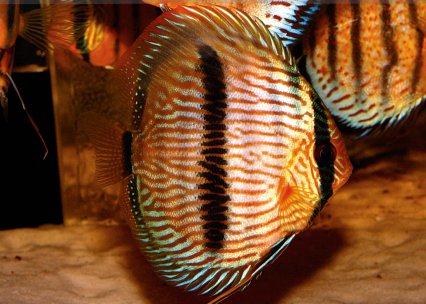 The real Heckel Discus must have nine black bars. They are normally dark or black, sometimes greyish or in negative colour, but only three should be intense and prominent.

These are the first, fifth and ninth in the caudal peduncle — the fifth almost always being the broadest, most dominant and most intense.

In addition, S. discus must have stripes usually running horizontally, rarely straight, mostly over their entire body, There’s usually between 13 and 21, averaging at 18, and they are 1-3mm wide.

The Heckel is on average the smallest of the three species. Adults are about 9cm/3.5” and rarely exceed 12cm/4.7” SL in nature. It is found only in very acid black water with pH values below 5.1 —mostly between 3.8-4.8. 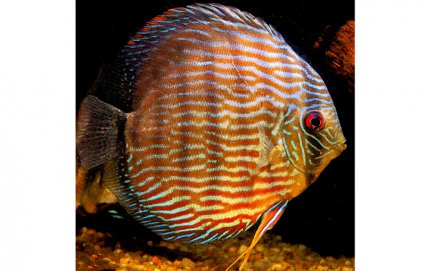 The Brown or Blue Discus can have eight to 16 bars. This feature has never been never been recorded in either of the other two species and in S. haradi can be black, grey, brownish or in negative. Some populations have no bar at all.

Colour variants, by population, range from pure brown, completely yellow, orange, rose, reddish or red, to blue or to black, and usually have either no pattern of colour at all — not a single parallel — or have all-over stripes.

Those stripes can dominate the body in royal blue, as in mostly alpha animals, pearl pattern fragments of stripes or very fine snakeskin stripe pattern stripes following a checkerboard style. 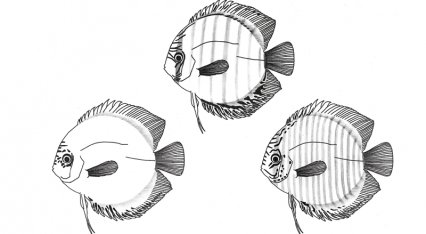 However, no S. haraldi has such a striking colour pattern as either of the other two species — and if they did it would be an occasional natural hybrid.

Its average size in nature ranges from 10-20cm/4-8” SL. Larger specimens are rare, but S. haraldi grows on average larger than S. discus or S. aequifasciatus.

It is only found in clear water habitats, sometimes mixed with white water of pH ranging from 6.0-7.8, these conditions also making it the most easy to breed.

Where are they distributed?

The Heckel, as mentioned earlier, is only found in extreme acid black waters and specifically in the Rio Nhamundá. This is its most eastern distribution in Amazonia, as the formerly mentioned location in the Rio Trombetas is very doubtful.

I was never able to find them there and the specimens in the Museu de Zoologia Universidade de Sao Paulo are not S. discus, although they are registered as such.

They can also be found in Rio Jatapu, Rio Urubu and Rio Negro systems — all of them left  Amazon tributaries — and in the Rio Abacaxís and its tributary, the Rio Marimari, which is a Paraná Urariá affluent in the southern Amazon region.

Green Discus populations are restricted to the western Amazon region. In southern tributaries of the Rio Solimões they are found from the Rio Urucú (Coari region) west in almost all tributaries and lakes to the Rio Jantiatuba, including Tefé where the first were found in 1865.

In the northern tributaries they are found only in the Mamirauá, the right-hand region of the Japurá river system in the Tonantins and again in the lower Putumayo right-hand tributaries and lakes. They are always confined to black waters and mixed only in the rainy season.

Green Discus are found in the Rio Nanay, but it is not a natural distribution. More than 30 years ago a ship carrying a consignment of Discus to Iquitos from the Jutaí river sank with 3,000 on board and they have established themselves there. The water parameters are almost the same as their original habitat. 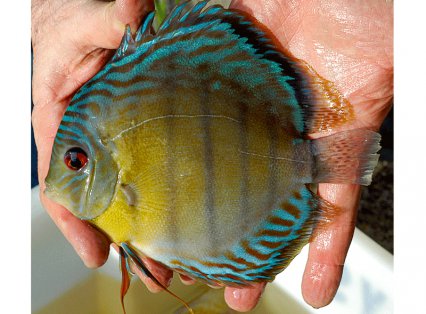 Brown and Blue Discus have the largest distribution of the three species. They are found almost throughout the middle and lower Amazon basin, from the most eastern end of Colombia to the most western part of the island of Marajó.

Yet they are restricted to clear water habitats and very rarely found in white or black waters), except when mixed by sudden rainfalls. No Discus is found in rivers like the Amazon itself, no Discus is in the Madeira in the Purus, Javari, Rio Branco or in the Japurá river.

Their most eastern river is the Tocantins river system. It is the last major southern affluent of the lower Amazon and where a large hydroelectric dam was built in 1984. Nobody has found Discus there since.

Their most westerly territory is the Rio Içá, a northern affluent. They are also found in smaller river systems such as the Calderón, coming from Colombia and Río Preto do Belém.

All three species of Discus can easily be distinguished by their own chemical water parameters and that’s why I recommend never keeping them together.

The habitat of Heckel Discus (S. discus) is always water of a dark tea colour, with visibility up to 1m/3.3’ and rarely more; pH never above 5.0 but averaging 4.5; conductivity from 6-12 µS/cm — but the average is always below 10. They live only in extreme acid water and oxygen concentration is often only 2.8 mg/l.

Heckels are active in daytime in groups of 30-200 or even more, standing in deep water, along rivers, or lake edges at a drop-off, normally at a depth of 1.5-4m/5-13’ among mostly acará-açú bushes (Licania spp.), a plant widespread in the Amazon basin and living partly under water.

In between are fallen trees and logs —  and there’s always fine white sand present too. 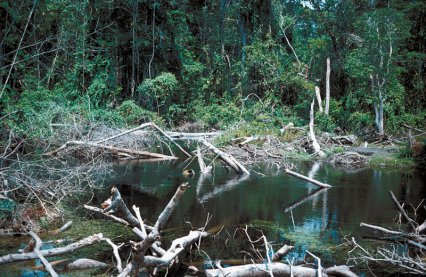 When the water rises the Discus habitat is the igapós — the flooded rainforests — and they breed and feed while hidden and therefore reasonably well protected from most predators.

Their daytime rest areas are always shady and they rarely swim in open waters in bright sunlight. Normally they don’t live near submersed vegetation as it cannot grow in such depth of black water. Sometimes Utricularia spp. can be found floating above, as can Salvinia spp. or Eichhornia spp. Driftwood is always present.

They live during the day in groups of 400-800 or more, standing in deeper water, along the edges of bays and lakes where there’s a drop-off and normally at 2-4m/6.6-13.1’ depth, mostly among fallen tree trunks during the daytime.

The Green Discus can be found among acará-açú bushes, especially during rising waters from September-October through to February.  As with the other species, during rising levels they spread out in flooded rainforests to spawn and raise their young, protected from intruders and with plenty of food available.

There’s no submersed vegetation in their habitat as it can’t grow in such a depth of blackish water. Sometimes Pistia stratiotes, Salvinia spp. and Azolla spp. float above, but rarely Eichhornia spp.  They do live over fine sandy bottom, normally beige coloured and there’s always driftwood and leaves present.

Brown and Blue Discus live in clear water habitats, especially at the beginning of the rainy season, mixed with white water, but rarely in black water.

Visibility underwater varies from 2-5m/6.5-16’. The pH value of their habitat is almost constantly above 6, often over 7, with oxygen concentrations around 4.1 mg/l and high conductivity of normally over 25 µS/cm — sometimes to 70 µS/cm.

Some submersed plants can be seen in their habitat, and I found them below large Nymphaea spp. swimming, or near large Echinodorus spp. growing partly underwater near edges, but often with floating plants such as Pistia stratiotes, Eichhornia spp., Salvinia, Azolla spp. or even below floating Utricularia spp.

They always live below fallen trees and branches, sometimes also between acará-açú bushes and camu-camu bushes (Myrciaria dubia), which also live partly under the water surface.

No species lives in fast flowing water. All three are restricted to quiet waters, bays and mostly lakes, of which there are more than 100,000 in Amazonia!

If a river is mentioned in any species distribution it means they are found only in its bays, or distant lakes — the still waters. Discus are never found anywhere near cascades or a waterfall as they stay far from such geographic features and never above rapids or a waterfall.