Fancy an archerfish you can keep in freshwater? Toxotes blythii is a rare and beautiful freshwater archer from Burma, says Neale Monks.

Size: Unknown for sure; likely around 15cm/6in

Water: Other freshwater archers do well in moderately soft to hard water conditions, and Toxotes blythii is probably similar. Does not need to be kept in brackish water. Temperature 25-28°C/77-82°F, pH 6.5-8.0.

Notes: For many years Toxotes blythii was a species only known about from a few drawings and photos, but in the last year or so it has appeared on the lists of fish traded by Southeast Asian exporters. Part of the problem seems to be that Toxotes blythii comes from a very restricted part of Burma that isn’t easy to get to, so collecting trips are very rare.

The other archerfish are gregarious in the wild, particularly when young, but become more territorial as they mature, and Toxotes blythii is presumably no different. Under aquarium conditions they are probably best kept in groups of three or more specimens that allows any aggression between individuals to be diffused throughout the group without any serious harm. In pairs it often happens that the dominant specimen bullies the smaller one to death. Singletons can be maintained successfully, but archers kept this way are sometimes a bit shy and nervous, though much will depend on their tankmates.

Keep away from boisterous, nippy or aggressive tankmates, as well as anything small enough to swallow (archers can eat prey up to about half their size).

Like other freshwater archers, Toxotes blythii probably tolerates salt well, which can be useful to know when treating for whitespot and velvet.

Aquarium: Archerfish are riverine fish that appreciate swimming space and a strong water current. A singleton might be maintained in a 200-litre aquarium with a decent filter, but it a group of three or four in 350 litres would be more impressive. Provide plenty of shade at the surface, either by using floating plants or normal plants with leaves that float up to the surface. All archers will jump out of uncovered tanks.

Sexing: Archerfish are not sexually dimorphic. Indeed, their breeding biology is a complete mystery! The brackish water species are said to swim to coral reefs and spawn there, but that presumably isn’t the case with freshwater species like Toxotes blythii.

Availability: These photographed were on sale at Wildwoods in Enfield, North London and were quite large, about 10cm/4in in length, and feeding well. 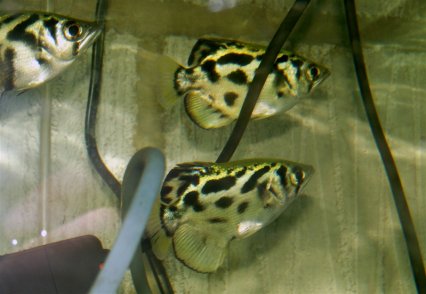