Celestial pearl danio - the small fish that made it big! The Celestial pearl danio made a remarkable impact when it was first discovered, as Dr Karel Zahradka explains.

He felt he had written a new chapter in aquarium history when presenting on a Singapore-based fishkeeping website the first photographs of what would temporarily become known in our hobby as the Galaxy rasbora. Yet others did not share his excitement, some even questioning his honesty….

After showing initial enthusiasm many hobbyists and experts became sceptical of Udomritthiruj’s photographs and began to voice concern that this eminent aquarist had played a joke on them.

They whispered that he had used computer technology to produce a photomontage species by mixing body parts of various small cyprinids —particularly Danio (then Microrasbora) erythromicron and Danio choprai.

He responded angrily by sending out more photographs of the fish he dubbed the Galaxy rasbora — and these not only silenced the sceptics but created a wave of ‘galaxy hysteria’.

As a result, fishkeepers, from amateur hobbyists to the owners of large scale fish breeding establishments, became deperate to get their hands on the stunning creature which is universally  today known as the Celestial pearl danio (Danio margaritatus).

At a time when my breeding attempts were starting to show reward a few years ago news filtered through that the natural habitats of the Celestial pearl danio had been almost complelely fished out.

The Myanmar government reacted by imposing a blanket ban on the export of any new populations that came to light. Fortunately, it was soon discovered that this revelation was more of a scare than hard fact.

However, at this time, many aquatic retailers in Western Europe were very canny and decided to use this story to attract environmentally-thinking customers into purchasing small groups of Celestial pearl danios for must-do breeding programmes to help make the species self-sustaining and minimise the need for future imports.

If this early interest in this fish continues it is destined to become a firm favourite. 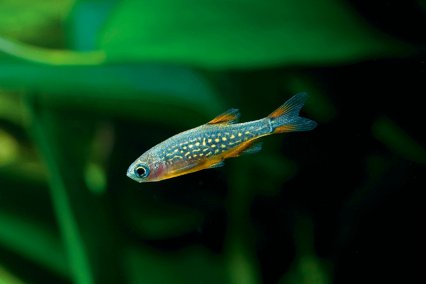 Should you keep it?

"The first populations of the Celestial pearl danio were heavily affected by overfishing for the aquarium trade, something which is very rare and something which occurred in record time. However, new populations have been found and the species is reportedly fairly abundant at these places. now. The Myanmar government is also allowing exports again.

"Ironically, the species is very easy to breed and many fishkeepers have been successful. Yet, as far as we know, it does not appear to be being commercially produced at the current time, despite market demands.

"Prices for the fish have now risen to around £4-5 per fish, up from £1.50 at the height of their boom, which we would hope is helping to keep demand down and ensure that the fish are purchased predominantly by those who genuinely intend to breed them."

The rise to fame

It had been an eventful ride before the Celestial pearl danio was accepted and established in the hobby. Here’s how it all started…

Discovered by collectors working for the exporter Kamphol Udomritthiruj in an undefined place in Myanmar and transported to Thailand.

Matt Clarke, now PFK’s editor-in-chief,  correctly predicted on the Practical Fishkeeping website that it would be  ‘the next big thing’ in the hobby.

The first six to leave Thailand arrived in Germany. These were purchased, as part of a larger shipment, by a well-known importer. However, the woman concerned spotted a rare Trigonostigma somphongsi among the shipment so, at the request of the Thailand exporter, had to return the whole consignment

Two days later the first sale of these fish was held in the Great Hall of Singapore. Such was the enthusiasm shown by a host of purchasers that the batch sold out almost immediately.

A consignment of 800 arrived at a well known aquatic retail outlet in north-west England. Enthusiasts travelled from all corners of the UK and did not hesitate to pay the asking price of around £8 per head.

Pete Liprot and Paul Dixon of the Bolton Museum Aquarium in the UK announced the first spawning success and managed to save seven fertilised eggs. Their success in breeding this fish would soon become regular and news began to filter through of similar successes in many other parts of the world.

Six months after its discovery, the fish faced being wiped out by trade demands. It had been collected so heavily that catches were down to just a few dozen per day. Myanmar’s Department of Fisheries banned exports to allow officials to assess the situation.

A survey in the surrounding area from which the species was first discovered revealed populations of the fish in five separate places and that the species is relatively abundant.

Tyson Roberts described the Galaxy rasbora under the scientific name of Celestichthys margaritatus and gave it a new common name, the Celestial pearl danio, after confirming it was not actually a rasbora at all and actually a closer relative to Danio (then Microrasbora) erythromicron. He listed both the type species and location as belonging to the Salween basin, about 70-80 km/43-50 miles north-east of Lake Inle in northern Myanmar.

Kevin Conway, Wei-Jen Chen and Richard Mayden of the University of Saint Louis moved Roberts‘ fish into the genus Danio under the name of Danio margaritatus after demonstrating it was actually a Danio closely related to erythromicron and not a member of a new genus.

Scientists studying the danionine group confirm that the fish is a Danio and not a member of any new genus.