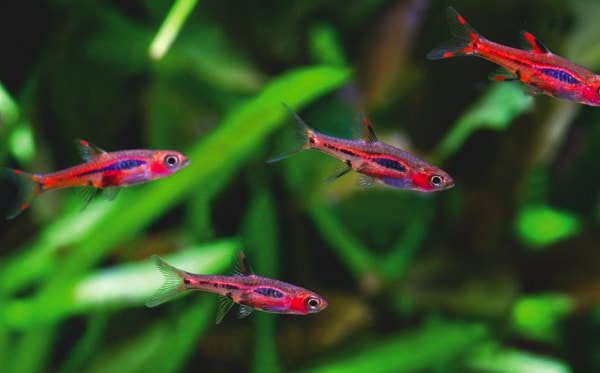 They may be small in size but they're big in character, and that's why Boraras remain so popular. Kevin Conway sings their praises.

Members of the genus Boraras are tiny cyprinid (carp-like) fishes that range from just 13-22mm/0.5-0.9”. As tinies they are not terrors, being peaceful and, even better for you and me, cheap to buy.  A decent shoal will only cost £20!

All species, except for the smallest, Boraras micros, were previously within the genus Rasbora. These were removed and placed together with B. micros, the type species of the genus Boraras, in 1993 — based on several differences between them and the larger species of Rasbora by Kottelat and Vidthayanon.

Because of their small size and nature, Boraras are best kept on their own in a dedicated species or community tank with other small, peaceful fishes such as other small cyprinids or characins. When kept with larger fishes, or even small boisterous ones, they will spend most of the time avoiding more aggressive tank mates.

In the wild B. micros and B. urophthalmoides inhabit swamps or marshes that have abundant aquatic vegetation. B. brigittae, B. maculatus and B. merah, meanwhile, live in small, slow-flowing rivers more associated with peat-swamp forests.

I made sure that both were always choked with Java moss (Vesicularia sp.), Indian fern (Ceratopteris sp.) and duckweed (Lemna sp.)  and added a thin layer of gravel for substrate and occasionally a piece of bogwood to help stain the aquarium water a light tea colour.

I added a small sponge filter and lighting was via a desktop lamp. Water changes at 30% were undertaken twice weekly with either aged tapwater treated with peat extract or rainwater.

These fish accept a variety of foods but, being micro-predators, do best on a variety of small live foods such as newly hatched brineshrimp, small Daphnia and microworms. However, they will happily accept dry foods such as crushed flakes or micro-pellets and take frozen foods.

When grouped in a dedicated species tank and fed on small live foods they will quickly settle and start to display their characteristic stunning colours.

Males of B. urophthalmoides are not as colourful as males of B. brigittae, B. maculatus or B. merah, but can be easily distinguished from females by a more intense coloration, particularly an orange/yellow stripe above the lateral stripe, the amount of iridescent blue in the lateral stripe and a slimmer overall appearance.

When in good condition males will become more aggressive towards each other,  their colours will intensify and they will begin fighting for and defending a small territory. Once they have established one they will begin to display and, if the female shows herself to be receptive, spawning should be imminent.

Species have spawned in aquariums under several water conditions and in 1998 Brittan wrote that a well-conditioned pair of B. maculatus adults should be introduced during the evening to a small tank of water with a pH of 6.5, DH 1-4, temperature of 24-28°C/75-82°F and comprising a mixture of broad and fine-leafed aquatic plants.

They should spawn the following morning, with the females laying a small number of eggs.

Other enthusiasts, including myself, have had more success breeding Boraras in small groups without removing any pairs to a separate aquarium.

Hellweg said only dominant males of B. brigittae spawned with females in a continuous fashion in his aquariums. A few eggs were laid just after first light over a number of days. Surprisingly, he has had great success keeping and breeding several species in water with a pH of 7.2-7.4 and a DH of around 6.

Females lay small numbers of very small eggs and the pair provide no parental care  whatsoever. They will eat their own eggs, given the chance.

In a mature, well-planted aquarium some fry may survive to maturity if they avoid any adults. However, a larger number may be raised by removing plants along with eggs from the adult’s aquarium to a separate one filled with water from the original tank.

Newly hatched fry are tiny and once they have absorbed the yolk sac need tiny foods to survive. I was never able to provide my B. maculatus fry with those foods and they never survived long.

Hellweg said he successfully initially fed B. brigittae fry with Paramecium before moving on to frozen Cyclops and baby brineshrimp. He also reported that placing slimy driftwood in the fry tank likely provided an additional source of microorganisms for them.

With a small, heavily planted tank and small live foods, all species of Boraras available in the trade are easy to keep.

However, described and undescribed are often confused in the trade — likely stemming from the fact that differences are only slight, relating only to the shape of dark markings on the body and differences in numbers of fin rays, which are difficult to count without a microscope.

However, it is possible to tell all of these described species apart, based solely on coloration. 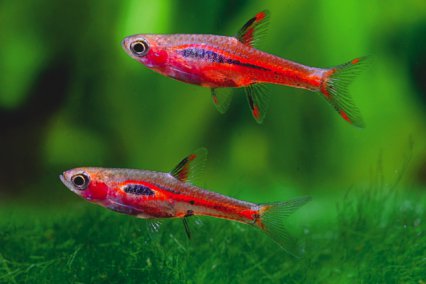 Notes: B. brigittae is the most attractive of the genus. Similar to B. urophthalmoides, it is distinguished by larger adult body size and intense red coloration, particularly above dark stripe along body and on fins.

B. urophthalmoides is orange/yellow instead of red above the dark stripe along body.

Both species are reportedly found together in areas of southern Kalimantan where distributions overlap, explaining why they are sometimes mixed in dealers’ tanks. 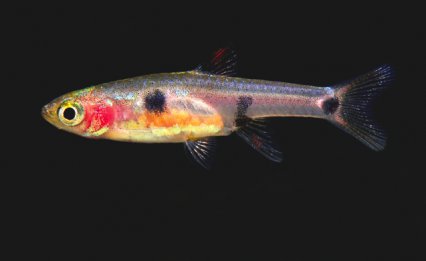 Notes: B. maculatus was the first species of Boraras to be described and has been popular since the 1950s.

The first Boraras successfully bred and raised in the aquarium, this is the largest member of the genus, distinguished by a larger adult size and colour pattern of a single large spot on the side of the body. 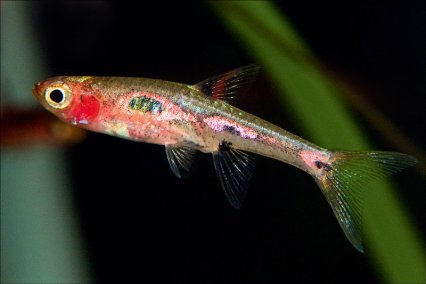 Notes: B. merah is common in the trade, but usually offered as B. brigittae. Both exhibit an overall red body, but B. merah has a dark ovoid spot followed by interrupted dark stripe as against a complete dark stripe along side of body. 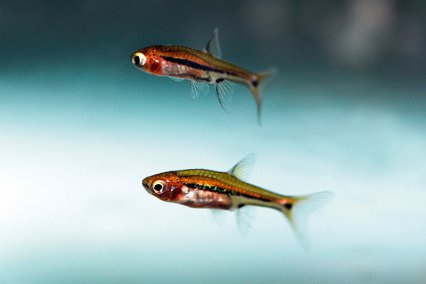 Distribution and habitat: Widely throughout Thailand and reported from Cambodia and Vietnam. Swamps and marshes with abundant aquatic vegetation.

Notes: B. urophthalmoides is the smallest species commonly available in the aquarium trade. According to Kottelat, wild specimens do not reach much more than 13mm/0.5” in standard length, but may grow larger under aquarium conditions.

B. urophthalmoides is most similar to B. brigittae but easily distinguished by smaller size and more orange coloration.

Although older aquatic literature referred to B. urophthalmoides as Rasbora urophthalma. In 1991 Kottelat showed that the type specimens of the latter represented a Puntius-like cyprinid and not the species to which that name had been given.

He corrected this nomenclatural problem by providing a new name for the species. This was urophthalmoides, meaning the appearance of urophthalma. 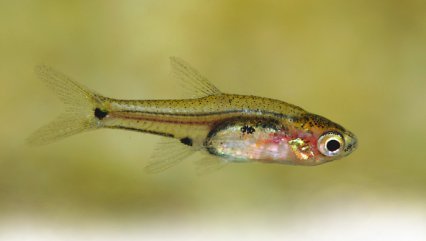 Distribution and habitat: Known only from two separate marshes in Thailand in provinces of Udon Thani and Nongkhai.

Notes: Smallest and most recently described species, having a very small natural distribution and known only from two swamps in Thailand. B. micros appears to be rarely available in the trade and mostly when offered for sale under the name B. micros is undescribed as B. ‘micros red’.

The generic name of Boraras is an anagram of Rasbora, alluding to the fact that species of Boraras have more caudal vertebrae than abdominal vertebrae — the opposite in species of Rasbora. Despite this, species are still often referred to under the common names of Pygmy, Dwarf, Midget or Mosquito rasbora in some shops.

Kevin Conway is regarded as a leading expert on Boraras, specialising in the species’ evolutionary development.

What was the main reason for placing these tiny fishes in their own genus?

Back in 1993 ichthyologists felt that these small species were so distinct from the larger Rasbora species that the erection of a new genus was warranted.

You studied Boraras at the Natural History Museum in London. Can you tell us more about that?

I studied the skeleton and evolutionary relationships of Boraras as part of my Master’s degree at the Natural History Museum in 2004/2005.

I spent a lot of time looking through a microscope at specimens preserved in alcohol or looking at skeletal preparations. It was not easy to dissect them, particularly specimens of B. micros, but I persevered.

Did you discover anything new about them?

Have you ever collected them in the wild?

Unfortunately not. That’s one of the good things about working in a natural history museum as nine times out of ten someone else has done the hard part for you and all I ever needed to do was walk to the collection and pick a jar from the shelf — or get in touch with another museum and have them delivered.

To date all of my fieldwork has been in African countries or in the Himalayas and so I have never had the chance to collect them. Most of the live Boraras I have encountered were purchased on a Saturday afternoon from Wholesale Tropicals in the East End of London!

Are there any differences between those species that live in marshes and those that live in peat swamp forest streams?

Not really. The only difference that I can think of is that those species that live in the marshes and swamps of Thailand (B. micros and B. urophthalmoides) seem to be a little smaller on average than the other species that inhabit the peat swamp forests of peninsular Malaysia, Singapore and Indonesia (B. brigittae, B. maculatus, B. merah). However, I can’t think of any biological explanation for this.

We believe Boraras  to be the smallest commonly available aquarium fish. Is this true?

Definitely. Though much smaller fishes are known to science (such as Paedocypris), species of Boraras, B. urophthalmoides in particular, are without doubt the smallest freshwater tropical fish regularly available in the UK.

Miniature fishes seem to be getting a lot of press lately. Do Boraras share anything in common with other miniatures like Paedocypris?

As far as Boraras go they are relatively boring anatomically. Other than being sexually dichromatic, which is pretty common among cyprinids, they do not exhibit any interesting sexual dimorphisms such as those present in some other tiny species like Paedocypris or Sundadanio.

In fact some scientists refer to Boraras as ‘proportioned dwarfs’, meaning they are almost identical copies of larger close relatives but shrunk to a tiny size — or have been miniaturised.

This is quite the opposite of the situation regarding Paedocypris, the adults of which resemble an earlier developmental stage of their close relatives and are now referred to as being ‘developmentally truncated’.