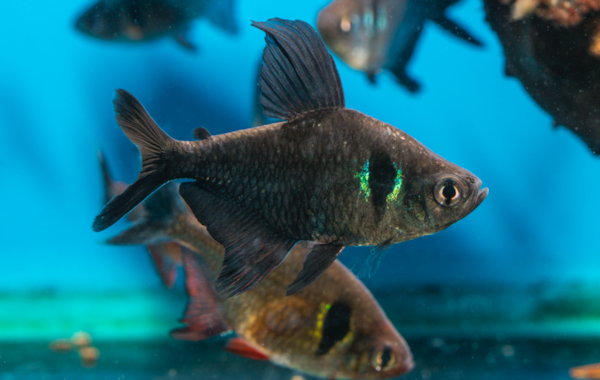 The Black phantom tetra, Hyphessobrycon megalopterus, is actually red in the wild! The reasons for it being bred into black-blue forms (especially the males) after being brought to the hobby are not quite clear, but it may have been to differentiate them from Hyphessobrycon eques, the Serpae tetra. Both species will shoal together in the wild as you can see in this video.

When brought to Europe, breeders and sellers may have realised there was more money to be made in offering two distinct coloured fish, rather than simply having two very similar red tetras. Whatever the reason, the wild forms are one of my favourites! They behave quite similarly to H. eques, but are a bit less boisterous. I have spent many hours observing them in the Pantanal wetlands of Brazil, especially in the Salobra river of Mato Grosso do Sul, where this footage was recorded.

Black (or rather red) phantom tetras (not to be confused with THE Red phantom tetra, Hyphessobrycon sweglesi) prefer to hug the banks, foraging among root networks, fallen branches and near to marginal and aquatic vegetation. I have often collected them from the shadowy open space beneath beds of floating Water hyacinth, Eichhornia crassipes. There, the cover of the roots of these vigorous plants can provide safe haven for many small fishes and allows them to predate on the numerous insects which live on and around the plants.

The Salobra is a relatively small river, rarely more than 8m across, and during the dry season it may be only a few feet deep, up to about 1.5m in the deepest channels. In the wet season, the river rises, bursting its banks and inundating the surrounding landscape. Grasslands, forests, roads and lakes all disappear under up to 4 metres of water.

This is the time when fish congregate to breed and take advantage of the numerous additional resources available: flooded vegetation in which to hide and rear young, access to fruit, seeds, insects and organic matter beyond the river channel and of course, the chance to breed during these times of plenty. This is the best time to spot the phantoms — their habitats are clear as the rising waters dissipate and slow the current, leading to suspended particles sinking to the bottom and improving visibility.

With a mask a snorkel, drifting along the bank or using a foot to hook myself into some roots or plants, I’ve spent hours observing these stunning little fish and I’m pleased I can share them here with you!