The Striped poison-fang blenny (Meiacanthus grammistes) is commonly available. Growing to some 10cm/4", the species is widely distributed around the western Pacific, from the Great Barrier Reef of Australia northwards to southern Japan, and from Papua New Guinea westwards to the Gulf of Thailand.

It is part of a specialised group of fang blennies, poison-fang blennies or sabre-tooth blennies consisting of a few dozen species over a handful of genera, all with fascinating behaviour and unique defensive adaptations.

Meiacanthus grammistes is very attractive, with a white ventral surface, often with a brilliant blue hue in some regional variations and yellow and black longitudinal stripes, believed to be a form of aposematic or warning coloration.

The striped markings terminate in black spots on the tail, which is much less lyre-shaped than other Meiacanthus blennies.

Unlike many other blennies, which tend to be benthic and spend most of their time on and around the substrate, the Meiacanthus are semi-pelagic. They have a well-developed swimbladder and can hover comfortably in mid-water where most of their feeding takes place.

This habit leaves it exposed to predation, so the species has evolved a venomous bite. This fish possesses a pair of prominent, grooved canine teeth, each linked to a venom gland, and which are employed when threatened.

The poison-fang blenny inhabits sheltered areas of the reef, in relatively shallow water, usually no more than 20m/66’ or so.

Your aquarium needs to provide, in addition to an area of open water for swimming, a range of rocky crevices which the fish can use as boltholes in order to replicate this environment.

The more of these nooks and crannies the better, and the fish will tend to be more conspicuous if more shelter is provided. The blenny often enters hideaways tail first and may poke its head out to survey its surroundings when not actively swimming.

M. grammistes is naturally a solitary species. Occasionally individuals may be found on the reef relatively close to each another, but they don’t form pair bonds or social groups.

Bear this in mind for smaller aquaria. Where space is limited, intraspecific aggression may result in fatalities, and poison-fang blennies don’t mind using their bites against each other in territorial disputes!

Water movement should range from low to medium flow, and they are tolerant of a wide range of lighting intensities.

The venomous nature of Meiacanthus grammistes has been effectively exploited by another species of blenny – the Striped poison-fang blenny mimic (Petroscirtes breviceps.)

The mimic isn’t a venomous fish, but has evolved to look morphologically very similar to M. grammistes, complete with fangs, which it isn’t afraid to use, although it does lack those glands that produce the venom.

Other fish avoid the venomous species (the 'model' fish), either instinctively, due to its warning coloration, or learning the hard way —  and that’s by surviving a bite! The mimic is also given a wide berth by other species.

A species of Cardinalfish (Cheilodipterus nigrotaeniatus) also bears a remarkable resemblance to this fish, as does a juvenile form of the bridled monocle bream (Scolopsis bilineatus).

M. grammistes is relatively hardy, and tends to be fairly disease-resistant — provided optimal water quality is provided. It can succumb to any common marine disease, but is remarkably trouble-free. Deteriorating water quality can be the trigger for an outbreak, however, so parameters must not dip.

Despite their relative hardiness, brief quarantining of new stock before introduction to the main aquarium is wise.

The captive fish has varied tastes and is adaptable to a wide variety of aquarium foods. Once settled in it will eagerly accept a range of frozen feeds such as Mysis and Artemia, although unenriched Artemia is nutritionally fairly poor, as well as freeze-dried and flake feeds.

Finely chopped fresh feeds may also be accepted and these fish like small feedings several times a day. A mature aquarium with live rock, with its natural populations of plankton, will help M. grammistes settle in and feed most naturally. 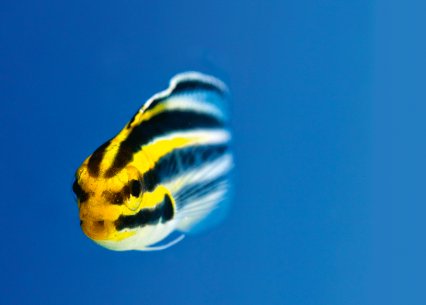 These fish are perfectly suited to the reef tank, provided there are no other fish of the same species, or even similar appearance, except in larger aquaria. They are generally peaceful and tend not to harass tank mates.

Most other fish tend to wise up fairly quickly as to their venomous tank mate’s potential and M. grammistes will not set out to harm sessile invertebrates.

They use their fangs only for defence, aimed at predatory fish or competitors trying to muscle in on territory. However, take care when catching a specimen. Avoid handling them and take care when using nets. Hand feeding is not recommended!

It appreciates a fair amount of swimming room as fang blennies naturally feed over a relatively wide area in comparison to many other blenny species. A minimum volume of 150 l/33 gal is recommended.

How dangerous is a bite?

A bite might hurt us, but shouldn’t cause anything other than mild, localised pain. In any case, the chances of venom being delivered with a bite are slim, due to the small size of the blenny’s mouth.

However, some people can be allergic to the venom, which can potentially be serious. Those sensitive to bee and wasp stings are likely most susceptible to an allergic reaction and the fish should be treated with the same respect as for a lionfish.

There have been infrequent reports of M. grammistes being cultured in captivity, although captive-reared specimens currently seem a trade rarity.

Various Meiacanthus blennies have been captive-bred for several years and this species is an interesting challenge.

The male looks after the eggs. He entices the female into his prepared hiding place — PVC tubes are ideal if creating one — and she deposits clumps of adhesive eggs which the males fertilise and tend until hatching. This takes under two weeks.

One male may mate with several females, as the ladies appear to ‘do the rounds.’

The tiny larvae can initially be fed on rotifers, later moving to Artemia nauplii.

Sexing is possible. The species seems to exhibit sexual dimorphism, whereby the males and females appear different. The caudal and pelvic fins of males appear to be larger in relation to those of females. There may also be extensions to the edges of the male’s caudal fin which are not present on the female.

While hardy, M. grammistes can be sensitive during acclimatisation to new aquarium conditions. Take care when doing so and avoid subjecting it to sudden changes in water chemistry.

Minimise stress by acclimatising in the dark and subsequently leaving lights off for several hours.