Jeremy Gay goes to Great Yarmouth to visit Mark Brumell - a breeder who turned his passion for breeding British goldfish into a profession.

I first bumped into Mark Brumell a few years ago when he was advertising Calico veiltails in the Goldfish Society of Great Britain bulletin. Later he sent me his copy of the now iconic Tommy Sutton interview by then PFK editor Nick Fletcher in the 1980s — an article still requested and which is also online.

Mark has been keeping goldfish seriously for the past ten years, learning from many breeders, including the Suttons.

He’s been keeping fish since he was seven and he's done the lot — including tropical and marines. He’s fascinated by goldfish varieties because they are man made and, when it’s man versus fish, it’s the breeder’s job to keep the lines adhering to the breed standard while the fish wants to revert to the wild type, brown, single-tail. 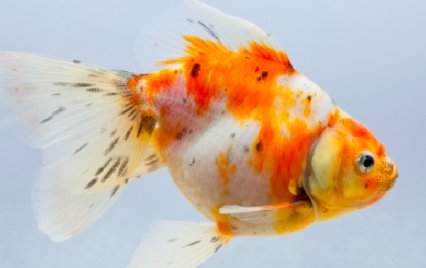 Mark openly admires the Suttons and their fish, and was in regular contact with Tommy junior before he ceased business in 2010 due to ill health. He learned much from Tommy about keeping and breeding goldfish and acquired many Sutton fish over the years, including Bristol shubunkins, Ranchu, Fantails and Orandas.

For those who aren’t aware of the source of Mark’s inspiration, Tommy Sutton senior was a goldfish breeder in the West Midlands who filled his garden with glasshouses and shallow ponds full of goldfish to sell on.

As interest and his business grew, Tommy bought up neighbours’ gardens and even after the boom of the 1980s and the business long gone, the Sutton name and bloodlines still ring around all the society meets and members.

The remarkable father and son dynasty had endured for more than 80 years.

Tommy’s garden business gave Mark the idea to start his own venture — that and the fact he had to retire early from working on offshore gas platforms.

He was already producing many goldfish per summer month and selling them to other members of the GSGB, but local retailers and even wholesalers were getting interested too. These were fish of considerable quality and true Bristol shubunkins, Veiltails and other varieties conforming to the UK nationwide standards but not available to import via the normal channels.

Mark has metal pins in his leg and in serious need of a new hip, but, despite these mobility problems that may have deterred others, he got in touch with the government about starting a goldfish breeding business from home. He was then sent on a five-week business course before gaining an Enterprise Grant.

A few tweaks had to be made to his fish house and garden to meet health and safety rules and regulations. Then he was awarded a pet shop licence and given the thumbs-up by local officials. The fish house was extended, another new polytunnel went up and I visited just as he was about to officially open for business.

Mark is a diehard fishkeeper and feels he has seen the quality of some shop goldfish steadily decline. 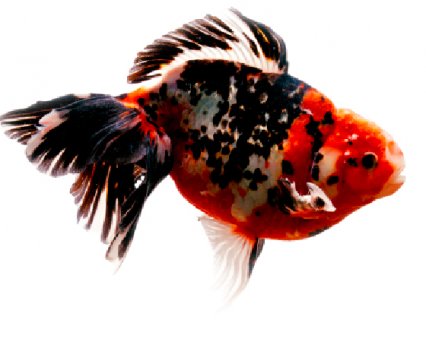 He believes that premium British-bred goldfish should be more widely available to the public and wants British aquarium and pond keepers to be able to buy British fish that have endured British winters, instead of having to rely on imports.

Mark uses traditional breeding and rearing methods, relying mostly on water changes, regular feeds of live foods and letting the fish do the rest. As he’s now into breeding as a business Mark must calculate the cost of each fish to produce and reckons he will have to upscale considerably to produce 2,000 fish every two months.

That’s a lot of fish and he already gets through a kilo of live bloodworm weekly — and other foods on top. 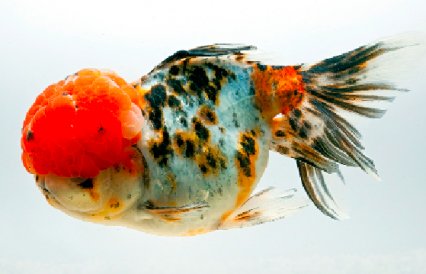 Books state that if you want to breed goldfish properly you need to plan for them the year before — and in January Mark was already planning the first of his Veiltails. Fish sit all winter at 10-13°C/50-55°F before being raised to 18°C/65°F in January and the metallic and Calico veiltails are spawned.

He puts one female with three males, not hand stripping them but leaving them to spawn naturally. Eggs are laid over fine greenhouse shading material, then warmed to 20°C/68°F then 22°C/72°F once free swimming.

Fry get their first water change seven days after that and are then fed on newly hatched brineshrimp for three weeks until they can take live bloodworm, sieved flake and “000” fry food from ZM Systems. 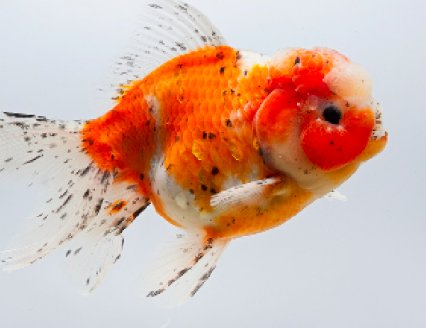 He invites enquiries from hobbyists, retailers and wholesalers and can be visited by appointment on Saturdays and Sundays. 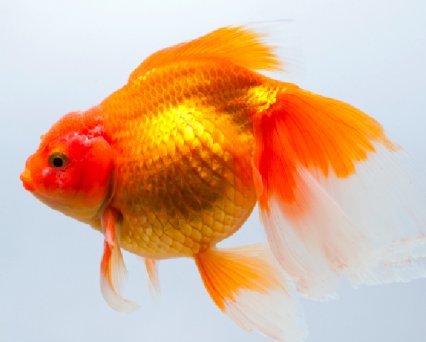 Mark is well known for his Veiltails as they are his favourite fish. A GSGB member for eight years, he got a first for a team of four Calico veiltails at the GSGB show in 2010 — so his fish are truly from award-winning bloodlines!

Veils are not without their problems though, as they are difficult to produce to a certain quality. Much of the reason is down to those trailing fins which become a key entry point for disease.

Last year Mark invested in a pond vacuum as he was convinced his veils were getting infected after dragging their delicate tails along the bottom of his rearing ponds.

Although many of his fancies are kept outdoors all year round, Mark doesn’t recommend veils be maintained this way because of this very factor.

They are also susceptible to ice during periods of severe cold and even embolisms in hot spells when having to endure green water.

Embolisms cause problems at home and on the show bench and Mark believes that the tiny air bubbles release air into their veins and rip tails. 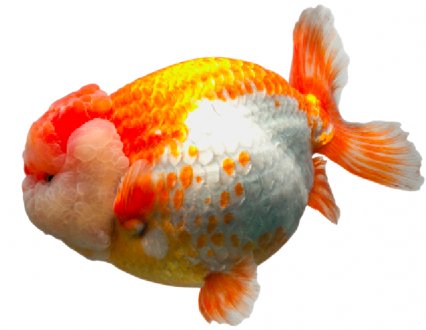 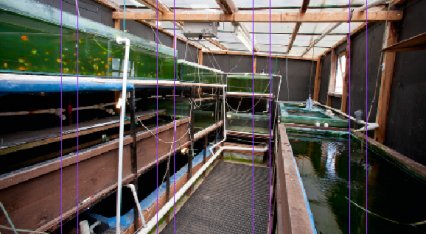 How Mark has set up

Green water can help the goldfish keeper as all that algae can aid coloration and is the base food when raising Daphnia which go on to be fed to fish.

A combination of light, bright polytunnels and clever use of shading will normally get green water just right.

On our visit Mark’s fish were kept in a combination of three small polytunnels, his old fish house, the fish house extension and a large Koi holding pond.

About 1,000 fish were spread over six ponds and 15 tanks totalling 20,460 l/4,500 gal. Filtration was present on most tanks, usually involving simple sponge filters and air stones, but the real key factor in all of Mark’s set-up regime is feeding and water changes.

Like the Suttons, Mark is a firm believer in regular water changes, and all his tanks and ponds have a 24/7 supply of treated tapwater flowing through them.

Mains water goes through sediment and carbon filters before being diverted via a manifold and plumbed to each tank using rigid pipework. Flow can be controlled to each tank’s individual needs before draining off via standpipes and drains and back into the supply. 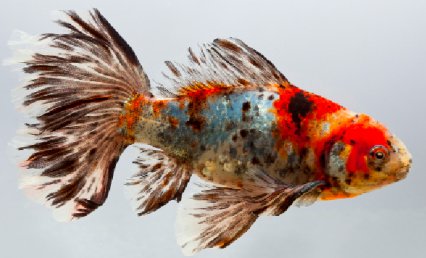 A constant flow of freshwater makes a huge difference as it washes away nasty growth-inhibiting hormones that cypriniids, especially goldfish and carp, like to emit. Unlimited freshwater keeps parasite numbers down, flushes away waste, yet feeds algae at the same time — all part of the goldfish food chain.

Mark told me that he encourages algae on some tanks and explained to visiting local authority officials that "algae is filtration, and algae is food." After going away and doing their homework, they were inclined to agree.

Mark’s feeding regime will seem extreme to most, but when you are in business to make money you have to up a gear. Fish are fed six times per day on live bloodworm, live Tubifex and live Daphnia. He also feeds pellets from ZM and live earthworms — another Sutton practice.

Slabs of live bloodworm as big as dinner plates arrive in newspaper and are stored in the fridge. Mark prefers live over frozen and says that you can’t pollute with live if you overfeed, as the worms don’t decompose in the water — as would frozen dead ones.

He’s also got a great supplier, called Yorkshire Brineshrimp Supplies. After looking at the size of portions and prices, and with fish growth as testament, I can heartily recommend it.

Mark has ponds just for Daphnia, which he sieves each day. They feed on green water and yeast, Mark finding that a common kitchen sieve has just the right size of hole to remove adults for feeding and let juveniles slip through to grow on.

I asked him how to achieve good head growth on UK fish, as some struggle in comparison to those in China. Mark believes that live food and peas help a great deal, especially loads of live bloodworm, with algae, of course, being the basis of everything.

The new business is very much a family affair and when Mark worked away a lot he had trained his daughters to raise the brineshrimp for him!