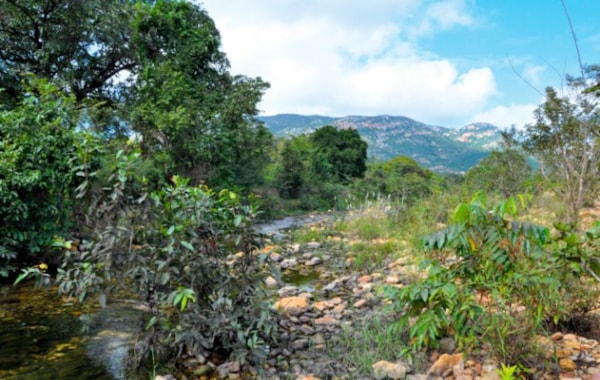 Heiko Bleher finds amazing fish in an Indian creek just hours before it is due to become part of a dam complex.

I had just given two lectures at the INDAQUARIA exhibition in southern India and had a little free time which my partner Natasha and I best used to visit the Seethalam Falls in Ubbalamadugu, Andhra Pradesh, south of Chennai. It was to be a case of just in time!

I had just three quarters of a day, as our flight out was the next evening, but I wanted to visit these falls as I always seemed to find interesting fishes near or at waterfalls around the globe.

During my talks at INDAQUARIA a breeder offered to guide and drive us there. We left next day at 5am and four hours later reached the dirt road leading to a distant mountain area and the falls. 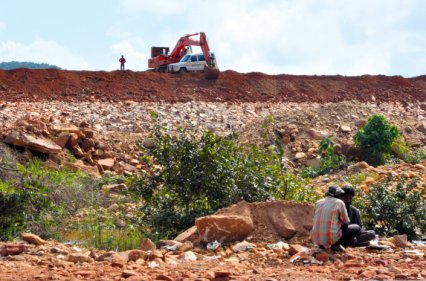 After some 12km/7.5 miles we saw large movements of trucks and caterpillars turning masses of earth and starting to build a dam there – all for a small creek coming down from Seethalam Falls…

One arm of the creek was still undisturbed, about 4-5m/13-16’ wide, and had a clear water flow over rocks, stones and gravel. Along the edges, where the flow was slow, the rocks were covered with green algae but showed a variety of fish and one submerse Potamogeton species. 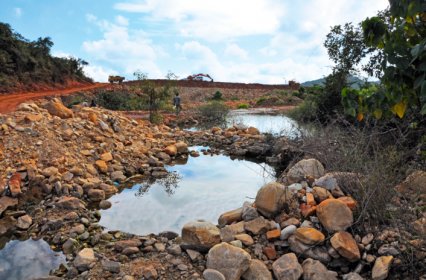 The other side had already been cut away from the main stream. Only algae-covered pools remained, with very few fish. There were already dead ones in some, like Macrognathus armatus. 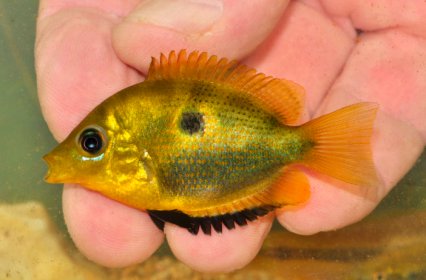 Further up I found a pool where we spotted a pair of trapped Etroplus maculatus and the female was guiding around at least 100 or more babies. The guarding male had a fascinating colour pattern, but there was no other fish.

I walked the undisturbed upriver part of the creek, searching for every living species. In the fast flowing part, over seemingly endless rocks, I saw a beautiful bright yellow Labeo, and, after lifting aufwuchs-covered rocks, chased one of these beauties into my hand net. 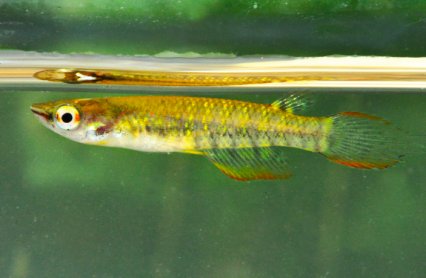 Where grass and trees hung over the right-hand edge of the creek and the water flow was slow I saw Aplocheilus in groups of two and three, sometimes more. Being very good swimmers they have adapted to survive and escape rapidly from any intruder or possible predator, particularly birds.

However, after chasing them all over the place, I took a few in my net and discovered two different species living together: A. blockii and A. kirchmayeri – the latter with red lips… 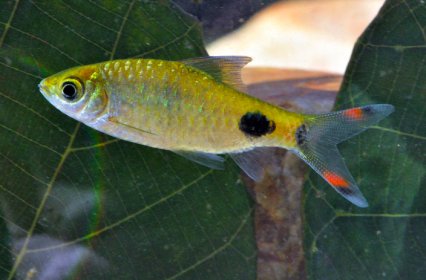 I also found a beautiful Puntius in the slow-flowing habitat and shallow area, between hanging-in grasses. It was definitely not a young P. filamentosus, because I counted scales and fin rays and still cannot place it. However, it is a jewel with its yellow body colour, four broad black bands and red dorsal fin.

The P. cf. filamentosus was also very nice and I got larger specimens in deeper water. I found another unidentified Puntius living sympatric with the latter. It is a larger species, grows to 8-9cm/3.1-3.5”, has a golden body and very large black roundish spot in the caudal peduncle. A few scales below the dorsal fin in mid-body are ornamented with black spots, forming short, two or three horizontal rows. 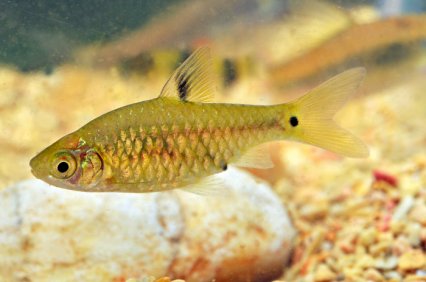 I also found the similar looking P. vittatus in the same habitat. Here it was extreme yellowish as well, with an even more pronounced yellow tail, dorsal and head region, but this fish stays small, hardly reaching 5cm/2”. It also has a tiny small round spot in the caudal peduncle. 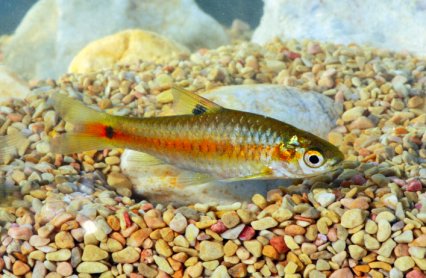 A magnificent P. bimaculatus was another barb found in the shallow habitat. Near the edges was a male with a bright red stripe from the eye into the tail and two almost square spots: one in the caudal peduncle and the other in the lower centre of the dorsal fin. 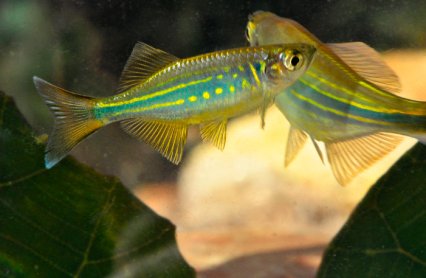 Finding five Puntius species in such a small habitat was amazing. They were living with Devario cf. malabaricus – a high form – and a Salmophasia species with extremely large eyes.

Unfortunately, the latter are rarely found in the hobby, although more than ten species have been recognised in the genus from India. 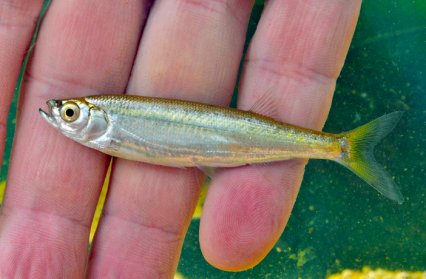 Salmophasia species may not have bright colours, but is a peculiar elongated shape with gigantic bright yellow eyes. It’s a very active group fish, along with the Devario species. Together they form an interesting shoal for any medium-sized aquarium.

I also found a very colourful Rasbora daniconius population living in smaller groups. The latter was the typical species with a bright golden stripe from the gills to the tail.

The fifteenth species I found was Macrognathus armatus, but it seemed most of this species had already died as I located only a single specimen and that was in pretty bad shape. 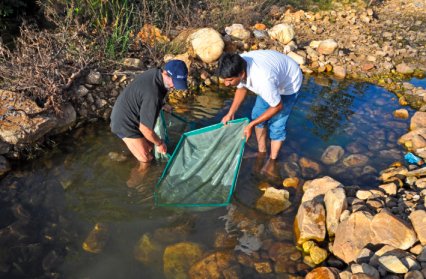 This creek of the waterfall’s drainage seemed undisturbed — until the diggers started to turn over the earth and divert part of it to build the dam. We had to move out, because the trucks were pouring in large stones, inhibiting the future flow of the creek.

Later that day everything was to be destroyed and these fish became history.