Nathan Hill investigates a fish that uses its own electricity to navigate and can reverse as quickly as moving forward to home in on its prey.

With no great turn of speed, no ambush techniques and no jaw crammed with flesh savaging canines, it’s a wonder that knifefish are as successful as they are. Yet they do have one trick up their sleeve – one that calls on the laws of physics itself.

There are several families of knifefish, but not all are closely related. Those of Africa and Asia belong to an entirely different order to the South American species I’m investigating here.

While the American species belong to the order Gymnotidae, the African and Asian belong to Osteglossidae – the same order that contains the giant Arapaima, and the Arowana families.

The Osteoglossidae are an old order, characterised by their bony tongues. Some also have more fins than the South Americans, still proudly sporting a dorsal fin on the top. They are attractive and usually very large, and suited only to the most determined tankbuster enthusiasts.

The South American gymnotids are a different affair. Almost blind, sometimes completely so, they tend to lack the endearing markings of their Asian and African non-cousins.

On the other hand, they come in a range of sizes, many of which are suited to the aquarium – albeit a large one – although many examples from the 180 known species will never be seen in the trade. Commonly, one South American species prevails, and others are, with very few exceptions, the domain of the committed specialist store.

What gives the gymnotid knifefish the edge is their ability to electro-navigate. Within the muscles of their bodies lay dedicated electricity-producing cells known as the electrocytes. Depending on how these cells are arranged has an effect on the electrical behaviour — with some cells running parallel to each other, while others are stacked in line.

Without complicating an explanation, just note that sodium and potassium ions play a central role, and that the cells are very flat, with one side becoming positively and the other negatively charged. 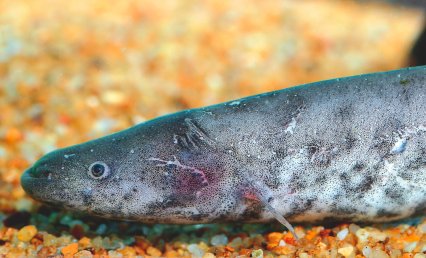 Knifefish aren’t the only fish to use electricity. Sharks have done it for millions of years, as have coelacanths.

Another aquarium inhabitant, the elephantnose mormyrid, is well known and enough have been in the trade long enough for their electrical abilities to become common knowledge.

However, not all electricity is the same, and elephantnoses are generally classed as ‘pulse’ fish, while knives are generally ‘wave’ fish – although there are some ‘pulse’ knives, too.

The benefit knifefish gain from electricity is more in tandem with the advantage that bats gain from echolocation — an ability to navigate in pitch-black environments that blind any organism relying primarily on sight.

Given that these are a nocturnal fish that like to track down their meals in often very deep or dark waters, they gain the edge on their visually challenged prey. In the valley of the blind, the man with electro-detection is not only king but also the apex predator.

Interestingly, if two knifefish of the same electrical frequency meet in the wild, rather than interfere with each other they can simply adjust their frequencies in a fraction of a second, using a jamming avoidance response.

The charge in a knife originates some way towards the tail. To optimise their range, many knives will swim at an angle of roughly 30° with their snouts pointed downwards. This maximises the potential pick-up of the field, although it does come with a hydrodynamic burden to the fish.

They actually forego energy conservation in favour of seeing as far as they can. 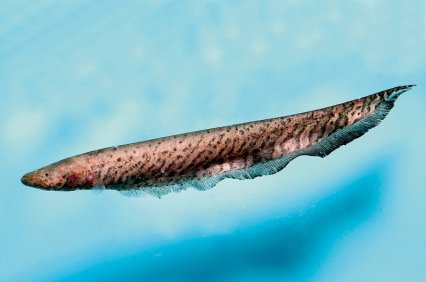 In the American knifefish there may be a small, rudimentary caudal (tail) fin, although this is not always the case. Some species, like the substrate burrowing Gymnorhamphichthys have a long, whip-like caudal extension, giving rise to their name of Mousetailed knifefish (pictured below). The more impressive Gymnotus species have no such tail and appear the most streamlined of the species.

If they bend their bodies the fish disrupt their electric navigation and so they strive to remain as straight as possible. 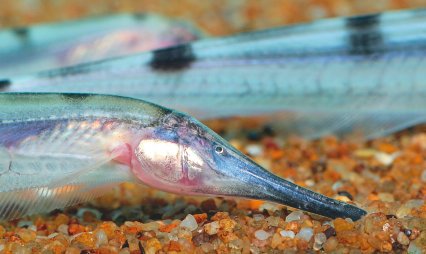 All knifefish have tiny eyes and never use vision as a hunting sense. Some species have tiny mouths at the ends of tubes and others have larger, although not huge, mouths.

As predators go, their prey is generally at the smaller end of the spectrum, preferring smaller characins. On a forage they’ll take any food source they can fit into the mouth.

Can I keep knives?

For a fishkeeper liking movement and interaction, knifefish are not the way forward.

Tank size should be chosen according to the size of species kept. For the common Black ghost (Apteronotus albifrons), a fish that can reach 50cm/20”, an aquarium of around 3m/10’ should be considered for a fully grown adult.

Be wary of retailers who claim that this fish will be fine in a 120cm/48” aquarium, as this will lead to stunting and premature death.

For the colossus that is Gymnotus carapo, or Banded knifefish, that tank will need to be up to 450cm/15’ long to harbour an adult. 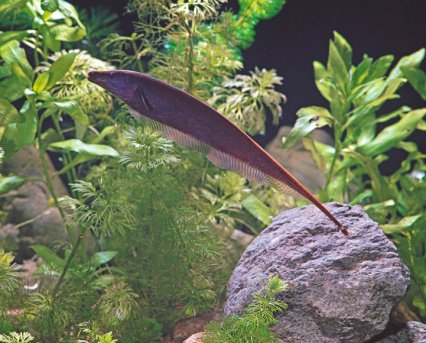 Knifefish of all species can be duped to make them more visible. One trick is to subdue the lighting, using red lights where possible. This ruse should be carried as far as possible, as knifefish will not naturally inhabit any areas of intense lighting, favouring dark canopies or deep river trenches.

Another trick is to get some lengths of clear piping. The knifefish, with their dire vision, will be unaware that they are still visible inside the tube — despite their electric senses assuring them that they are hidden!

Knifefish often prefer dense tangles of décor over large and open spaces. They soon learn their way around and become adept at flitting at eye-watering speed through the tiniest of nooks and crannies. The only decorative requirement is for caves, which they will soon recognise as their safe spot.

Water should be acidic and soft, with a pH of around 6.5 and a hardness up to 15°DH. Knifefish aren’t the most sensitive of fish to water chemistry or quality and so some leeway is given here, but some species are prone to surface parasite infections, such as whitespot, when kept in poor water. Black ghosts are a good example of this.

The acceptance of other tank mates is often disputed by knifefish keepers. Universally agreed, however, is that small fish will be consumed readily. Aggression between knives means that it is usually safest to keep solitary specimens, unless attempting to breed.

Aggression tends not to be displayed towards other tankmates and they tend to be aloof with many other fish. Boisterous cichlids should be avoided, as should otherwise hostile fish that could easily damage a knife.

Feeding knifefish is straightforward enough and any meaty, fresh food will be accepted. Smaller fish will enjoy bloodworm and other typical aquatic invertebrates, whereas larger ones will take anything from a supermarket fresh fish counter or fishmonger.

Don’t waste time trying to get knifefish to accept dried foods, as they have little interest. However, by the same token, there isn’t a weaning period involved with knifefish as with some predators which have to be gradually taught how to feed on dead offerings. This factor alone gives them the edge over many other predatory fish to hit the UK stores.