Keeping fanworms and feather dusters in the aquarium Fanworms and feather dusters are among some of the most beautiful marine aquarium inhabitants. However, these bizarre creatures are frequently misunderstood and perhaps, ironically, increasingly high-tech developments in the hobby have made many aquaria unsuitable for them.

They are actually annelids, which means they are related to earthworms. However, unlike the free-living members of that phylum, these worms are sedentary — in other words, they are sessile and fixed to a spot.

As with the earthworms, they have a segmented body, although it is protected within a tube. Two groups are of interest, both with slightly differing morphologies and habits. All worms of both groups live in tubes, however, and they have paired gills used for respiration and feeding. 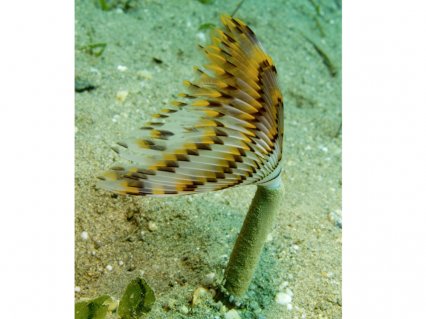 The sabellids construct a tube from detritus and mucous — out of which they extend a bizarre but beautiful 'crown' of paired gill plumes known as radioles.

These trap particles and sort particles according to size. Larger ones are rejected, assisted by a mucous which helps the current to carry them away. Medium particles are used to help build the worm’s tube and the finest particles are ingested as food.

Tiny cilia — hair-like projections on the surface of the gills — move the particles along to the mouth.

Many sabellids are found living in the sand and mud on the seabed. 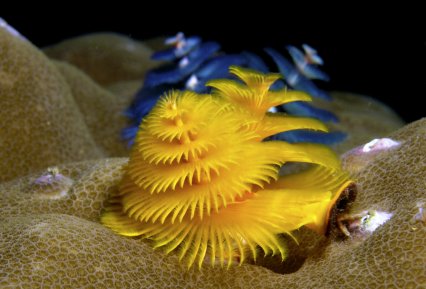 Serpulids, forming the other group, secrete a calcium carbonate tube and they tend to be found on hard substrates. In many cases they can be found living on corals, such as Porites species.

The worm initially burrows into the host, assisted by secretions of acid, and, if taking up residence on a coral, the host eventually overgrows the tube.

The paired gills of serpulids tend to assume a spiral-like morphology and the worm also possesses a nifty trapdoor mechanism known as an operculum. This is used to effectively shut off the entrance to the tube, making these worms extremely well protected. 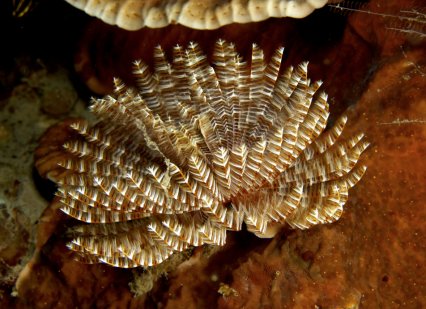 Being suspension feeders, these worms trap tiny particles on their gills. To some extent, they can facilitate this through rhythmically pumping their gills, but a degree of water movement will be needed to help in feeding.

Water movement not only carries food to the worm, but also carries oxygen to the gills and helps the animal to shed mucus.

Sabellids tend to rely on laminar flow, which can be switched in direction to mimic tidal motion.

Serpulids are more tolerant of strong, chaotic water movement, presumably because of their habit of hunkering down in the skeleton of their coral host, which affords some protection.

Small particulate foods will be necessary and this can include phytoplankton, juices from frozen feeds and liquid invertebrate foods. Frequent feedings offer the best chance of success, but don’t go crazy, as some feeds can play havoc with water quality.

Target feeding of individual worms, using a syringe or pipette, may be a good approach.

The modern reef aquarium, with its aggressive skimming and low nutrient levels, are often not ideal for these worms, which benefit from regular supplementary feedings. Mature systems are preferred for captive worms, as these provide stable water conditions, as well as housing potential feed in the form of natural plankton populations. 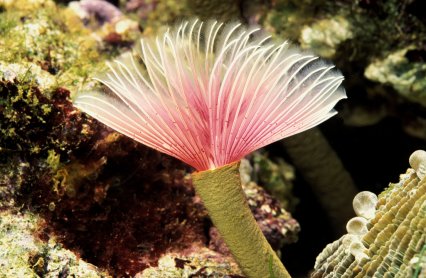 Many fanworms have met a premature demise, courtesy of inappropriate tank mates. Just think how appetising those juicy fan-like gills must be to various fish, as well as many other invertebrates.

This means that puffers, most triggers, angels and many butterflyfish are no-no.

As for invertebrates, many crabs seem to find the gills and the tubes of these worms irresistible.

There are several genera of feather duster in the trade, including Sabellastarte, Bispira and Branchiomma, and to some extent they have similar requirements in terms of flow and feed.

Placement is important as, if conditions aren’t to the worms’ liking, they tend to leave their tube, often with dire consequences. However, they will occasionally relocate to a more favourable position and fashion a replacement.

They can be placed in the substrate, or among live rock. Some tiny species will be introduced as hitchhikers on live rock and may proliferate in the right conditions. 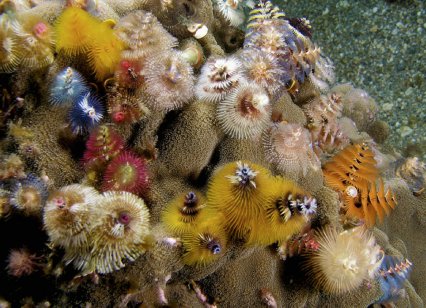 Of the serpulids, the Christmas tree worms of the Spirobranchus genus are the most familiar to aquarists. They are commonly seen embedded within imported Porites corals in the Indo-Pacific and other corals, such as Montastrea (star corals), may serve as hosts in Caribbean waters.

Spirobranchus giganteus, the horned Christmas tree worm, appears the most frequently-seen species, having a cosmopolitan distribution in all tropical seas.

Coloration of the plumes is highly variable and can be quite stunning. It’s easy to understand the appeal of these animals and, if you’re going to plump for Christmas tree worms, chances are they’ll be found on a coral host.

The best chance of success with the worms is to look after the host coral — so provide it with optimal water quality, adequate water movement and sufficient lighting. It also appears that the coral itself may provide some form of protection or benefit for the worm, so it’s important to meet the host’s needs. Ensure, too that the worms get regular feeds. 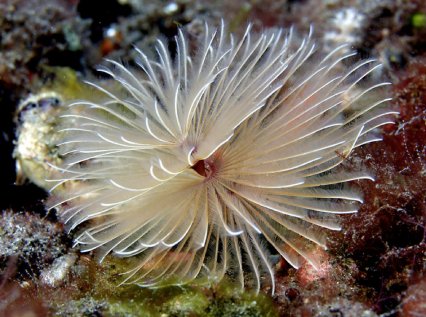 Don’t lift them out of the water

Be careful when acclimatising tubeworms. Ensure changes to water parameters are made gradually and, where possible, avoid lifting them out of the water as any air trapped in the tube could cause problems.

Can I breed these worms?

Both soft-bodies and calcareous tubeworms have been known to spawn in captivity, although the chances of larvae settling and surviving are slim. However, some sabellids will reproduce asexually in the aquarium under optimal conditions.

The crown: shed or dead?

Many fanworms will shed their crowns of feeding tentacles in unfavourable conditions. This may happen in response to poor acclimatisation techniques when introduced to the tank, or as a result of a drop in water quality.

Many aquarists will then discard the worm, perceiving this as terminal behaviour, but it’s worth bearing in mind that fanworms will regenerate the crown in suitable conditions.

Keep an eye on any specimens that have shed their crowns, but don’t be too hasty to get rid of them. Ensure water quality is suitable, feeding is adequate and the worms are not experiencing predation. With luck, they will recover.

On balance, fanworms are best avoided by newcomer aquarists. They’re not impossible to keep, but prior experience of maintaining water quality and meeting their exacting needs in terms of flow and feeding will be highly beneficial.