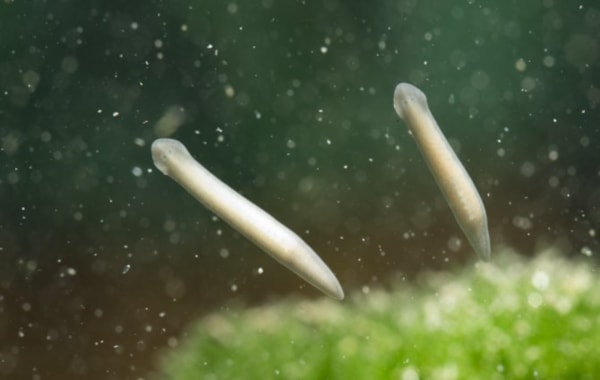 Don't be fooled by their harmless appearance, these flatworms spell danger in your tanks. Tackle them this wayâ€¦

We are seeing planarian flatworms ever more frequently in the hobby, due in no small part to the rise in popularity of shrimps.

However, few people seem to understand the warning signs associated with these seemingly innocuous little slitherers. Planarians can be broadly placed in two camps; those that feed on trash and those that predate.

The former group belongs to the Dugesia genus, or the black and brown planarians, and on the whole they are harmless, at least to fish. However, they are not without their problems.

The first is an indirect issue. Dugesia feed on detritus. They gorge on biofilm, relish uneaten flakes and tuck into faeces. That’s not their fault, but their presence indicates an aquarium receiving poor husbandry.

An unusually dirty tank will harbour hundreds and they can prove problematic in some aquascapes where solid wastes aren’t always as readily removed as in fish-heavy systems.

The other big issue is that they hitchhike. They have been found clambering over fish, sometimes sliding into gills and other sensitive parts, causing stress and escape responses.

However, from the point of view of shrimps there may be a deeper problem.

Research indicates that these planarians may secrete a toxin that’s harmless to fish but to which invertebrates, such as shrimps, are highly susceptible. Should they slither their way under a shrimp’s carapace – as they are prone to do – they could be depositing poisons directly into

The other genus is a different ball game. The white planarians of Procotyla, especially Procotyla fluviatillis, are fiercely predatory, in so far as a worm measuring 15mm/0.6” can be. Among their diets are small worms, crustaceans and even each other! They are more than capable of guzzling down surprisingly large Daphnia.

Procotyla lunge at small things that come near – including shrimplets, shrimp eggs and, in some cases, adult shrimps. In lab conditions they even lunge at the tips of needles and try to wrap around them, so they can suck out what they believe are nutritious organs inside.

Both types of planarian are resilient and traditionally have been tricky to control. Copper treatments work, but will blight any shrimps in the tank, making the whole exercise somewhat pointless.

Emptying the tank and starting again won’t affect them, and altering the temperature will do little. In fact, planarians will live happily for several months in refrigerated conditions without food!

One method that does work is the addition of betel nut palm extract, as found in the product called No Planaria. This will reduce planarian numbers while leaving shrimps untouched – although some anecdotal reports hint at deformed shrimps afterwards.

However, remember that after treatment the tank will need a husbandry overhaul with lots of syphoning, as all of those dead bodies will quickly pollute water.

What is a planarian?

They are part of the Platyhelminth phylum of flatworms and are related to parasitic versions such as liver flukes.

They are fast reproducing and hermaphroditic, with the ability to regenerate if chopped into segments. Cut a planarian into five and days later you’ll have five fully formed flatworms!

Most planarians are free roaming and scrape a living through grazing, although some can be predatory or parasitic.

They are well built for flatworms, having advanced brains as well as a surprising array of sensory apparatus.

In addition to having a head adapted to detect currents of water, they also have two very obvious eyes that you’ll see if you witness an adult moving over a glass surface.

Usually they prefer darker conditions, and it is less usual to see them roaming during the day.