How to set up a brackish goby aquarium George Farmer offers a step-by-step guide to set up a small and simple brackish aquarium for a fish that had long fascinated him.

A brackish aquarium has always been quite far down the list of my things to do, but after recently setting up my first marine tank I figured why not?

Having just a 63 l/14 gal aquarium available, the list of suitable brackish species was soon whittled down and I quickly found a species I have always fancied: the Bumblebee goby.

Gobies have always fascinated me and I look on them as being completely different to anything I have kept before. The cute-looking Bumblebees soon grabbed my daughters’ attention and they are now among our favourite fish to keep.

To add further interest to midwater levels I decided to keep some Stigmatogobius sadanundio or Knight gobies.

In the long-term these may require a larger aquarium as they can grow up to 9cm/3.5”, but with my low bioload, large external filter and regular water change schedule they are perfectly fine inside my tank at the moment.

In future, however, I intend to set up a much larger brackish aquarium featuring live mangroves and larger fish. 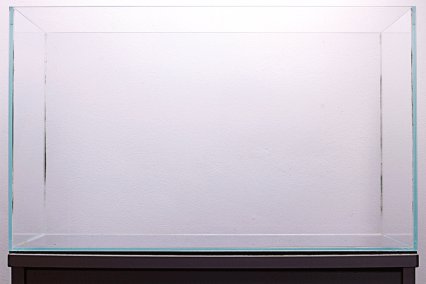 I use a 60 x 30 x 36cm/24 x 12 x 14”, 63 l/14 gal, braceless rimless OptiWhite. These are quite expensive but popular as they are ideal for overtank lighting. Any aquarium of similar dimensions will be fine, but if you want larger brackish fish, such as monos, scats and archerfish, then a much bigger tank is necessary. 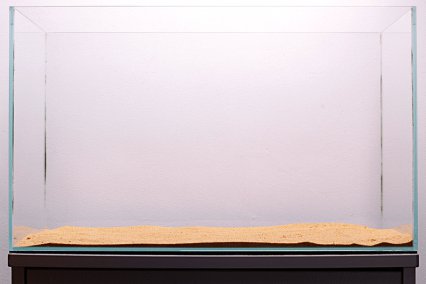 A thin layer of river sand is then added to the tank’s base. I am not planting this aquarium so will keep the depth minimised to prevent any compaction and potentially excessive build-up of anaerobic bacteria.

The sand is inexpensive, looks great and I smooth the surface with a dry paintbrush. 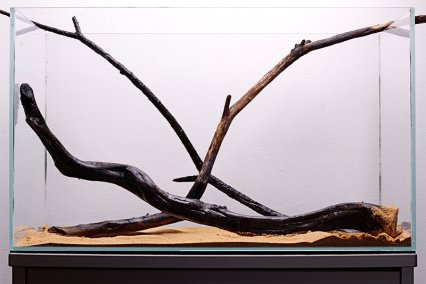 Three pieces of driftwood are added and positioned carefully to achieve a well-balanced appearance. These examples were collected from a local lake, but similar pieces can be purchased quite readily.

Ensure the wood is suitable and does not float prior to filling the aquarium with water. 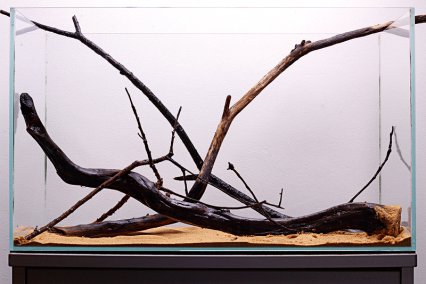 Smaller wood is next

Smaller branches and twigs are added around the wood. These help to make the design look more natural and interesting.

The twigs were also collected from a local lake and will sink in water.

It is worth inspecting any collected wood for evidence of snail eggs and removing them. 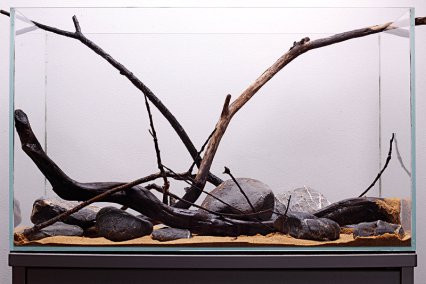 Large pebbles are added around the base. I have chosen smooth stones and pebbles as these give the effect of originating from a river with the flowing water eroding them.

I collected the stones from a brackish estuary and they provide added interest with white veins running through each one. 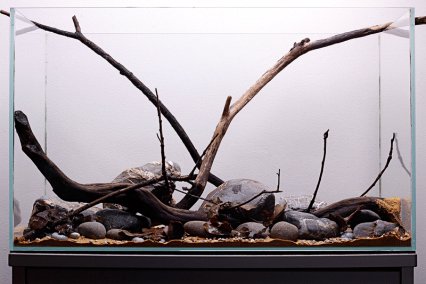 Dried oak leaves are added to help enhance the  natural appearance for the set-up. They are pre-soaked to prevent them floating after water is added.

Pea gravel is around the bases of the stones, acting as a visual transition from the sand and enhancing overall texture of the layout. 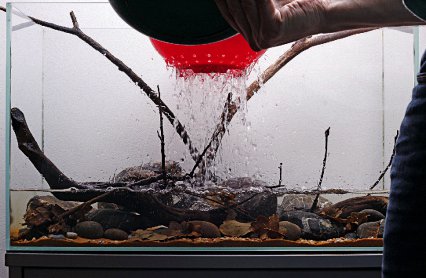 Water is added via a colander to prevent disturbing the décor.

I pre-mixed some de-chlorinated hard tapwater and a high quality synthetic marine salt to a specific gravity of 1.005. This matches the chemistry of the fish supplier’s water, giving me GH 22 and pH 8.1. 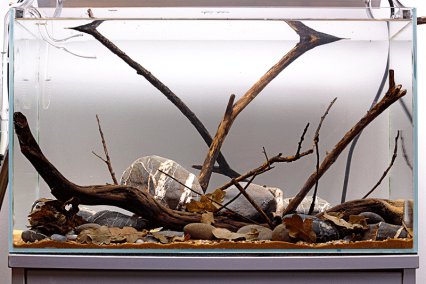 Equipment is fitted. I use a mature large external, so can add fish right away. In a new set-up ensure the aquarium is fishless cycled.

I use glassware to minimise the impact of equipment on the aquascape, but this is not necessary.

What is brackish water?

Brackish water is a mixture of freshwater and seawater. It is usually found in estuaries where a river meets the sea. The mangrove swamp, also known as a mangal, is a classic brackish water habitat.

The most specialised residents of mangrove forests are mudskippers that seek out food on land and archerfish that spit at prey, knocking them into the water to be eaten.

Brackish water can be defined with a salinity of 0.5-30 parts per thousand dissolved salts. Due to the nature of the habitats with the flowing freshwater, salinity can vary considerably.

Fish that live within estuaries are able to tolerate changes in salinity and called euryhaline. Those that tolerate less range in salinity are stenohaline. 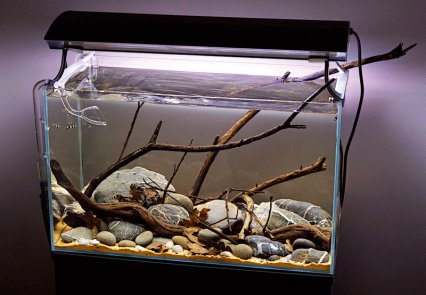 Is it a biotope?

Although this is a nice-looking aquarium in which to keep brackish water fish, and shares some similarities with their natural habitat, it’s not a biotope.

Brackish water habitats tend to be dominated by sediment as they occur in the lower reaches of rivers with tidal influence. As a result the substrate would really be quite muddy, which wouldn’t be ideal in an aquarium setting.

The two fish species included may also not occur together in the same habitats. Although not authentic, it does look better.

Gobies form the family Gobiidae, which is one of the largest fish families with more than 2,000 species in more than 200 genera. Most are less than 10cm/4” and some species of the genera Trimmaton and Pandaka remain under 1cm/0.4” when fully grown. 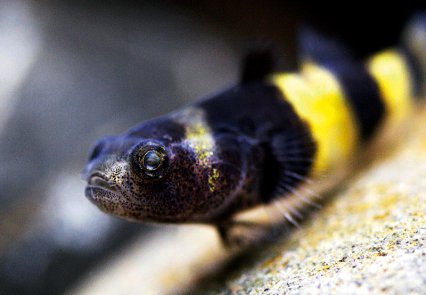 Diet: Meaty live or frozen foods such as enriched brineshrimp, bloodworm and Daphnia.

Breeding: Adding freshwater will often induce spawning. The female lays eggs in the substrate, normally in front of décor, and the male takes on the parenting role. The eggs hatch after two to three days and a few days later the fry are free swimming.  Newly hatched brineshrimp is an ideal first food.

Cost: You can expect to pay around £2 plus per fish. 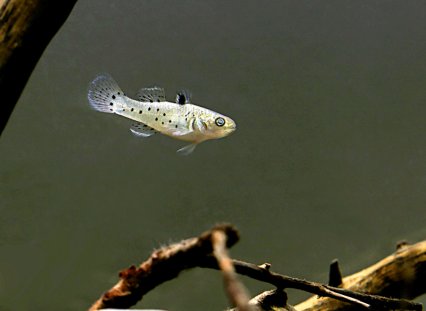 Diet: Omnivorous. Feed a variety of frozen and quality dry foods. Be careful not to keep large Knight gobies with very small fish as they may eat them.

Notes: Goby expert Dr Helen Larson says there are four species in the genus: Stigmatogobius: S. borneensis, S. pleurostigma, S. sella and S. sadanundio. She says sadanundio is a catch-all name for a variety of misidentified species, so you may find other species on sale under the common name of Knight goby.

Check out some of our other step-by-step guides:

How to set up a Cambodia biotope aquarium