How to keep Rhinogobius gobies 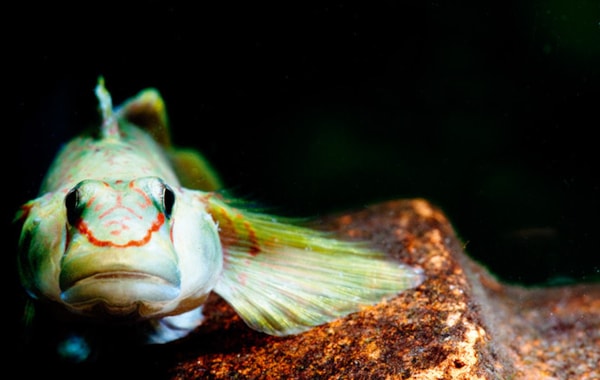 We answer some of the most common questions on the wonderful little Rhinogobius gobies for the coldwater or cooler tropical aquarium.

What are these fish?

These small Asiatic gobies, known as Rhinogobius, reach about 5cm/2” in length. They’ve been recorded from Thailand, China, Vietnam, Laos, Cambodia, Russia, the Philippines, Japan and many islands in the West Pacific. There are more than 70 species, as well as probably dozens more awaiting description.

Sort of, they are probably better considered sub-tropical and they’ll do fine in an unheated aquarium indoors. Temperatures between 10-25°C/50-77°F are tolerated — and some go as low as 4°C/39°F. Many are fine in indoor coldwater aquariums or cooler tropical tanks.

In what habitats are they usually found?

These are generally considered fish of streams and typically occur in swift flowing streams over sandy or stony riverbeds, often in relatively cool water. They have sucker-like pelvic fins just below their pectorals, which they use to stick on to rocks and aquarium glass.  A few live in still water, such as the lacustrine species, but most are current loving.

Most are. However, Rhinogobius fall into three groups: amphidromous, lacustrine and fluvial.

The amphidromous fish may be found in fresh, brackish or saltwater. These spend their adult lives in freshwater and breed in rivers, but their larvae are washed out to sea where they spend their early life. As they mature they migrate upriver to spawn.

Lacustrine fish spend their lives in freshwater lakes, while the fluvial ones do so in rivers. Some species migrate out of lakes and up rivers and some remain entirely in lakes — making them quite a diverse bunch.

Are they interesting to keep?

Definitely, but you can easily become addicted to them! Although some may look a bit drab, these little fish have a fascinating behaviour and their size means they can be kept in small aquariums.

UK legislation has restricted the sale of many fish but these half-tropical-half-coldwater fish haven’t been affected by this.

How do they feed?

It depends on species. Some feed on midge larvae and other morsels drifting past. Others are foragers.

Frozen bloodworms and brineshrimp are the top choice. Some may take tablet foods. They rarely accept flake and won't thrive if this is all you offer them.

Which are most common ones in the shops?

There are more than 70 poorly known species, plus lots of undescribed ones, so they tend to be very difficult to identify.

Members of the Rhinogobius duospilus complex are most widely seen, all of which have oblique stripes on the cheek of adult males. Species in this group include R. changtinensis, R. duospilus, R. genanematus, R. henryi, R. lungowensis, R. ponkouensis, R. sulcatus and R. wangei. They’re often sold as R. wui — the former name for R. duospilus.

These Chinese species are landlocked, living only in freshwater. They’re sold under a range of common names, including Red-cheek gobies, Red-neck gobies and Hong Kong gobies. Imports can consist of several species.

In the shops now is R. giurinus, found in Taiwan, China, Korea and Japan and reaching 8cm/3.1”.It occurs in freshwater, brackish and marine conditions, though most do fine in freshwater and entirely landlocked populations do exist. Expect to pay about a fiver each.

There are also some stunning candidianus in the shops (about £14 each) and others on sale as gigas and nagoyae formosanus, which look very similar.

Can they be sexed easily?

Fairly easily. Males normally have much brighter colours, often with distinctive markings on the cheeks and branchiostegal membrane — the flappy skin between the underside of the gill covers.

Males often have dorsal markings that are absent in females and their fins are also more pointed.

Females giurinus are plumper when in spawning condition and golden patches of eggs can be seen through their flanks.

However, scientists have observed female mimicry in one species. Males of Rhinogobius sp. ‘OR’ in the Kamo river, Japan, can sometimes resemble females, perhaps as a tactic to enable them to sneak in and fertilise the eggs of females when they’re trying to mate with rival males. Such fish are known as sneakers. 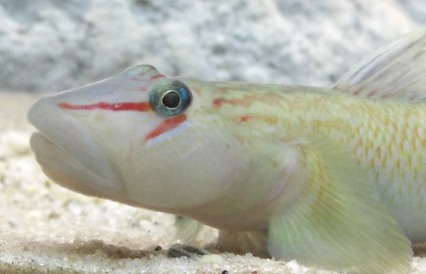 Anything above 45cm/18” is fine, but 60cm/24” is an ideal minimum as in this size you could keep a few without problems. In a 45cm tank you’d probably be limited to one male and a couple of females.  Add a decent filter too as these fish like turbulent water and use it for courtship displays. Several species can be mixed.

What of water parameters?

They’re unfussy, but seem to do well in slightly alkaline water — so a pH of 7.0-8.0 should be fine. High temperatures aren’t tolerated and they prefer cool water, so unheated tanks in centrally heated homes are fine. Most do not need salt, as the most commonly sold species are completely freshwater. 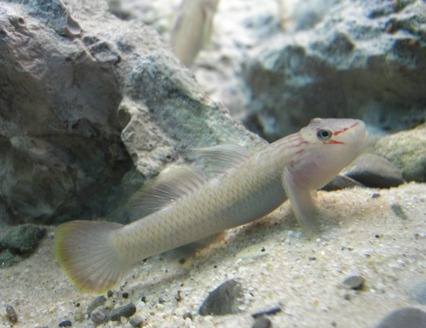 What other fish can I keep them with?

In warmer water, Danio and Microdevario, would be good choices. They’ll also mix well with hill stream balitorine loaches, such as Sewellia and Gastromyzon.  These will also tolerate the slightly cooler conditions that Rhinogobius prefer, but if the temperature drops below 20°C/68°F think carefully about the species you’re mixing, as not all tropicals will appreciate this.

What décor should I add?

Go for a natural looking mix of sand, gravel and small pebbles, plus rocks and boulders embedded into the substrate. They often excavate a nest around the underside of a rock.

What mix of sexes should I put together?

Males are territorial, so avoid keeping too many close together. Go for several females for each male in the tank,  unless the tank is larger and contains many more hiding places — in which case a group should be fine.

Males make nests under stones. They show off to potential female mates by displaying in fast flowing currents. The females are drawn into the nest to lay a clutch of eggs, usually under a rock.

Do they exhibit parental care?

Yes, the male guards a nest of eggs and sometimes his nest contains the eggs from more than one female he’s lured into the nest. The male won’t normally leave the nest while watching over the clutch, nor will he feed, so he may lose weight. 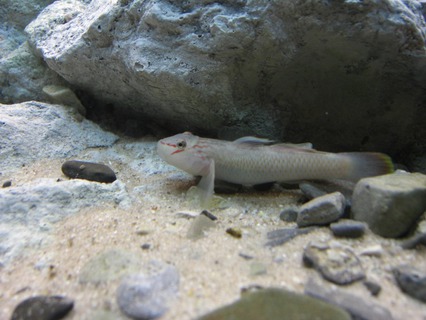 Can they be bred in captivity?

Several species have been bred, mainly members of the duospilus complex, though they’re so tricky to ID accurately that it’s not really known which ones.

Signs of impending spawning include nest construction by the male, usually centred around an excavation under a rock. The males display to potential mates in flowing water, often around the spawning site, and display heightened colours.

The eggs vary in size according to the species. Those with larger eggs have bigger fry which are easier to raise than the small egg varities.  The eggs have an adhesive filament that secures them to the rock and prevents the current sweeping them away.

The eggs reportedly take a couple of weeks to hatch (though this will vary according to the water temperature). The large-egg varieties will take newly hatched brineshrimp, so you should have plenty of time to get a culture on the go. The adults are fry predators, so remove them if you want to rear the offspring.

Some species are amphidromous and their fry are swept out to sea where they grow as larvae before migrating back into freshwater. These are the trickiest forms to breed.