Freshwater shrimps: The next generation Freshwater shrimps: The next generation

Chris Lukhaup takes a look at the new Panda, King Kong and Red ruby shrimps taking the world of freshwater invertebrates by a cash-fuelled storm.

The first freshwater shrimps appeared in tanks around the world some years ago, triggering a new and dynamic trend. Freshwater invertebrates like crayfish, snails, crabs and, first and foremost, shrimp have since simply stolen fishkeepers’ hearts.

The uncrowned queen of this trend, the hitherto scientifically unidentified Crystal Red shrimp, is denominated for the time being as Caridina cf. cantonensis. However, there are reasons to believe that it could be a still undescribed species.

The nominate form of this shrimp originates from the New Territories, Hong Kong, but the exact location is only known to very few people — the reason for this being to preserve the economic interests of local collectors not keen on any competitors collecting and shipping these shrimp all over the world. 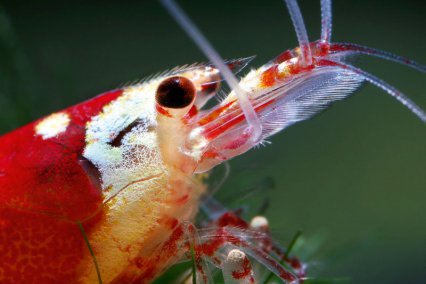 Meanwhile, a thriving cult has surrounded this species — and is comparable to that for guppies. There are books dedicated to the Crystal Red, shops selling exclusive CRS breeds and many web pages devoted exclusively to these wonderful animals. Breeders and hobbyists throughout South-East Asia, Japan and Europe, pay exorbitant prices for their coveted shrimp — especially if these belong to new forms or varieties.

Be it the outstanding Red Bee from Japan, Black Tiger from Germany or King Kong Bees from Taiwan, all are now ‘must haves’ for many breeders willing to meet any price for such specimens.

As an example, Red Bee shrimp are divided into different quality levels and high-bred specimens have been known to reach astronomical prices, up to 9,000 euros/£8,300 for a single one.

Most fishkeepers face an agonising dilemma when deciding to buy either one shrimp or a compact car!

Of course, you could always buy shrimp, hope to get a large number of offspring and make some serious real money with these animals. But don’t count your chickens — or shrimp — before they hatch as these have some rather high requirements and often die tragically after a few days.

New keepers will then not only mourn the shrimp offspring they had counted on but the money they had invested in the first place. Here, the common mistake on the part of many fishkeepers had been to be impatient and not cater properly to their needs. 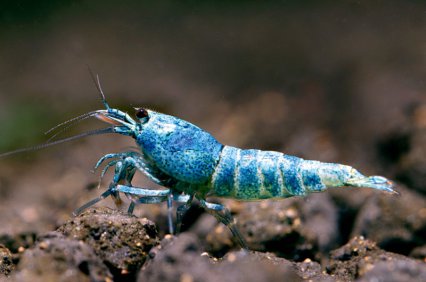 New colour morphs originating from Taiwan are causing plenty of excitement. Their breeders call them Panda Bees, King Kong, Blue Bolt (above) Red Ruby or Golden (below). When the first examples came to Japan and Europe there was an uproar in the respective forums and among breeders — comparable to the hype around Sulawesi shrimp not too long ago.

The new morphs have been created by a spontaneous mutation first ocurring in Taiwan in the tanks of a breeder who concentrates on the very variable Red Bee shrimp. Similar mutations appeared in Germany, but none so far have brought about such an attractive outcome.

So the arrival of the new Taiwan Bees might be due to pure luck or maybe the aptitude of their breeder. By now he has succeeded in building a stable and solid strain with these variants, so has been able to lay the basis for a new generation of Red Bee. 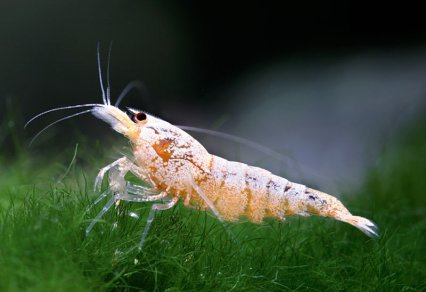 When comparing the requirements of different shrimp varieties and forms, you will soon find they are practically identical. Some species are less complicated than others, however, and do fine at high pH values or in hard water. However, if you want to breed them successfully you will always have to provide water parameters similar to the conditions of their habitats in South China, Taiwan or Hong Kong.

When Andreas Karge, Werner Klotz and myself went to these habitats in South China and Hong Kong last year we found these waters have all quite similar water parameters.

The shrimp live mainly in shallow water near the riparian zone of the small, slow flowing brooks whose temperature was rather cool, measurnig only 16°C/61°F. There was no carbonate hardness to be detected and the electrical conductivity was 12 µS, which results in a pH of only 5.8.

Their habitat had all the characteristics of a typical softwater rivulet.

On the banks of the heavily shaded brooks there were interesting ferns and mosses, but we couldn’t detect any plant growth in the water. The bottom substrate varied from rocky to sandy and there were considerable amounts of fallen leaves in larger pools. In areas such as this we found the majority of shrimp.

Successful breeders have therefore approximated these conditions as far as possible in their breeding tanks. 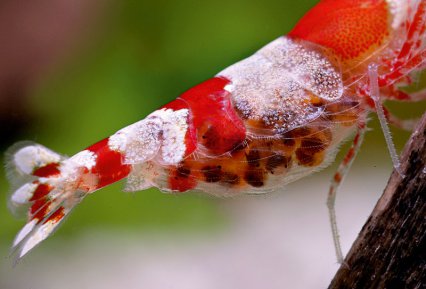 When I visited a Taiwanese-Chinese breeding station in China, I gained an insight into its set-up. When interviewing one of Taiwan’s most important breeders I was able to worm out some of his secrets about breeding King Kong, Panda and Red Ruby.

At the station the substrate consisted mostly of fired clay granules without fertiliser, as it does not influence the water. The water itself was very soft, pH slightly acidic to neutral.

That substrate was not directly on the tank bottom, lying instead on an undergravel filter driven by a strong motor-equipped external filter, or in combination with an air-driven sponge filter.

This system was tried and tested in Japan and reduces organic loads to keep the concentration of noxious germs as low as possible.

None of the breeding tanks I saw were overstocked or smaller than 80 l/18 gal, as larger ecosystems are easier to maintain stable.

In the hobby you often see breeding tanks too small with too thin a bottom layer where waste and food rest together and so pose a danger, especially to young shrimplets. 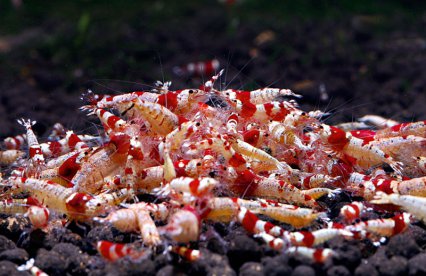 Young shrimp are also quite stationary and move only around a small area, but if there is a high bacterial load or an anaerobic spot exactly in this spot, most young shrimp probably won’t survive.

Another important factor for breeding success seems to be a well-aerated tank.

Many shrimp species react badly to a quick rise in temperature — shrimplets first and foremost. Falling temperatures do not seem to be that big a problem, however. Consider this when you net shrimp out to put them into another tank.

It’s also extremely important to adapt them quite slowly to any new water parameters and adding small amounts at long intervals seems to be the secret to success.

Nearly all the tanks in the breeding installation were planted very sparingly, mostly with mosses or some Vallisneria. There were smaller pieces of Moor wood with aufwuchs for the shrimp to graze on in all tanks too.

The new colour morphs were kept together with our well-known colour varieties in one tank. The breeder revealed that he does not mate King Kong with King Kong, as this would be the conventional way of doing so, but these high-bred varieties are in a tank where they can mate with Red Bee. Breeders claim that this results in more stable offspring. 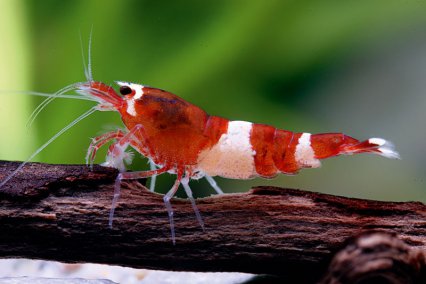 I detected a high colour variability among the young in these tanks. Quite a few Panda and King Kong Bees were among the great numbers of shrimplets, although most were still conventional Red Bees with some Red Ruby and a few Blue Bolt or Extreme King Kong Bees.

In Taiwan, as well as in other South-East Asian countries, shrimp with a high percentage of black, like Black Diamond or Extreme King Kong, are much sought after.