A reef full of cichlids! Imagine your ideal cichlid tank â€” and one that's big enough for you to swim in! Minos Reef in Mozambique has all the magical ingredients you would choose for yourself, says Dr Ad Konings.

Having returned to Minos Reef on Lake Malawi more than a dozen times, I’m convinced it’s the most attractive of all the sites for the lake’s snorkelers. It’s like a very large home aquarium and there wouldn’t be anything you would want to change in it.

Sometimes also known as N’nosi or Meluluca Reef, it is known for its huge population of Red zebra (Metriaclima estherae) and, while floating at the surface of its clear water, often just 5m/16’ deep, you can plainly see the vibrant colours of various species of mbuna.

Even the rocks are attractive; coloured purple-reddish, thanks to a particular type of algae that covers them in the shallows.

Minos Reef is rather large but the best sites are grouped at its northern edge. At several places tips of rocks break the surface, but at the end of the rainy season those at that northern edge are usually submerged.

The reef lies about 2.5km/1.6 miles from the village of Meluluca on the mainland where the shore is sandy, with a few scattered rocks, and is inhabited by only a few mbuna species.

From the northern edge Minos extends at least 2km/1.25 miles south, slowly shelving into deeper water, but even 10km/6.2 miles further south, at Nkhungu Reef, it is only about 10m/33’ deep. Between Minos and Nkhungu there’s a pure sandy habitat and the cichlid populations of the two reefs differ in colour and composition.

Most of Minos Reef is about 7m/23’ below the surface and large sections are only 5m/16’ deep.

Its structure is also particularly distinctive. The bottom is composed of rocky ridges, perpendicular to the coastline, alternating with sandy tracts.

The ridges of the reef are 10-30m/33-98’ apart and, while swimming from one to the next, you can see various groups of cichlids either in rocky or intermediate habitats.

The northernmost ridge of the reef is also the widest, at about 30m/98’, and on the north side it cascades down 22m/72’. 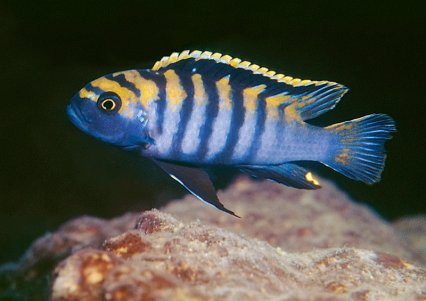 This biotope is found on and around the rocky ridges of the reef. The rocks can be quite large and boulders more than 10m/33’ in diameter are common. Medium-sized rocks fill gaps created by the boulders and form the main shelter for mbuna.

None are exclusive and the two utaka are commonly found on coasts with a steep decline, but maybe the clear water attracts these species as they are common at the reef.

L. fuelleborni males along the entire eastern shore of the lake have an all-blue colour, but at Minos Reef and at Nkhungu Point some males have a yellow orange dorsal fin and a powder blue body. OB females are a deep orange and simply beautiful. 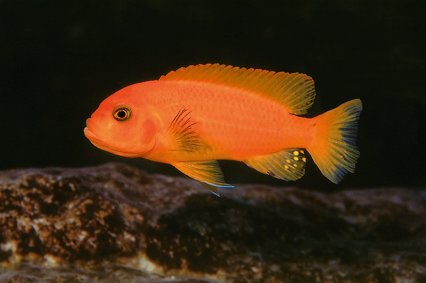 The most spectacular of all, however, is the Red zebra (M. estherae) and I have yet to find a female with the ‘normal’ beige-brown colour. All reef females are either completely orange red or OB (orange blotch), like the one shown above. There are also thousands of them!

M. estherae has a much wider distribution, from Metangula, 25km/16 miles north of Minos, to Chiofu Bay in Malawi —100km/62 miles in a line from the reef.

At Minos, however, the females have the reddest colour, the intensity seeming to vary with the seasons. In June, shortly after the rainy season, they are the deepest red. This could be due to more frequent algae blooms in the hot, rainy season. 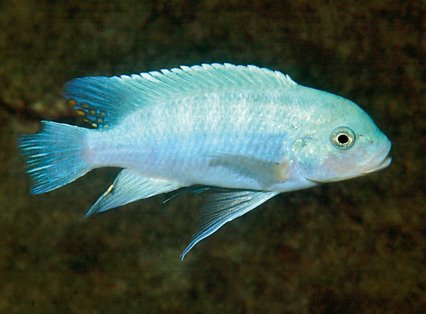 The name Red zebra alludes to these females because males (above) are powder blue. The classic blue-bar (BB) zebra, (M. zebra), is also on the reef. Most males have a dark dorsal fin caused by the extension of the vertical bars on the body into the fin.

Another spectacular cichlid is the local variant of C. afra. As in all known populations of C. afra, males exhibit a wide variation in body coloration. Some can have an entirely black dorsal fin, while in others only the vertical bars on the body are thinly extended into the fin. Some males have a greenish hue on the head and shoulders while others either lack that colour altogether or are yellowish.

Shallow and intermediate between ridges

The tracts of sand and stones between the rocky ridges are home to cichlids normally found in intermediate habitats. Some areas are covered with small pebbles and look like a dried-up riverbed. 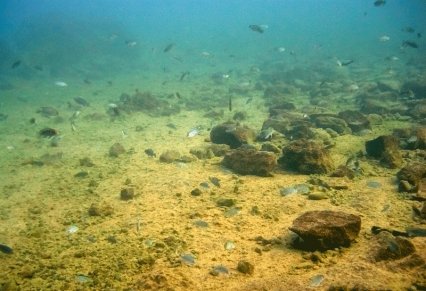 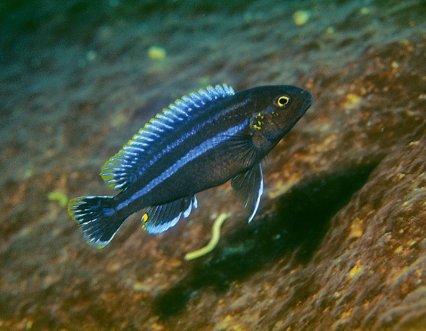 M. mossambiquensis (pictured above) is a common omnivore, scurrying in small groups close to the bottom in search of titbits. Females and non-territorial males look like light yellow M. auratus, but males are much bluer than male M. auratus.

Another common mbuna here is P. johannii, which has a much wider distribution along the eastern shores of the lake and is found between Metangula and Makanjila Point in Malawi. The bright yellow females, which normally stand out among the local mbuna community, blend into the background in the face of the overwhelming presence of the Red Zebra females also found here.

The undescribed Metriaclima sp. ’blue reef’ is also a regular and occurs at Nkhungu Reef as well, but nowhere else in the lake. Males and females are both powder blue and males are difficult to tell apart from those of M. estherae. M. sp. ‘blue reef’ is abundant and large schools feed on plankton up to 1m/3.3’ above the bottom.

At the reef’s northern edge there’s a steep drop to about 22m/72’ and the rocks there are big, many larger than 1m/3.3’ in diameter. 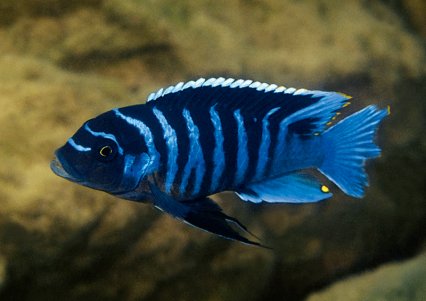 Like L. fuelleborni, male L. trewavasae are blue at Minos Reef, although it is more a royal than the powder blue of L. fuelleborni.

I have seen it several times preying on the fry of the large catfish Bagrus meridionalis, locally known as Kampango.

At about 22m/72’ down the rocks give way to sand and an intermediate type of habitat.

The bottom is rather flat but small groups of rocks break the monotony of what otherwise is a an open sand floor and they provide some shelter for the smaller cichlids.

Copadichromis parvus is a common utaka of the intermediate habitat between Metangula and Chiloelo, but is normally found in shallower water. 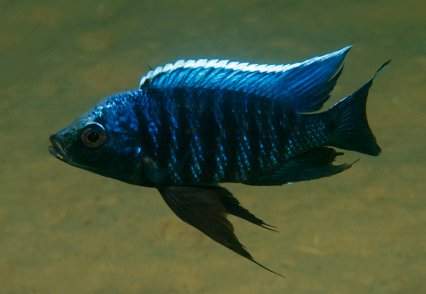 The male (pictured above) constructs semicircular bowers against and under small rocks in order to create a secure spawning site and protection against egg eaters while spawning. Females (pictured below) are usually found in small groups over the bottom. 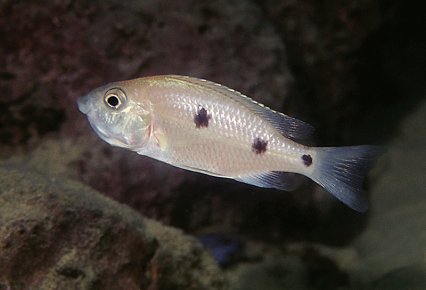 Apart from some unique geographical variants G. sp. ‘patricki minos’ seems to be the only endemic cichlid inhabiting Minos Reef. Although not particularly rare here they are not as abundant as other mbuna. 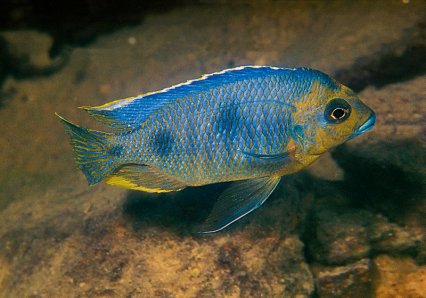 O. sp. ‘auromarginatus goldhead’ (pictured above) is a striking species which has a narrow distribution between N’kolongwe and Nkhungu Point. Territorial males are purple/blue with a golden yellow head. They build small sandscrape bowers against large boulders, preferably in caves or under overhangs.

A male’s territory is some 5m/16’ in diameter, from which he will vigorously chase away any competing rival.