The term livebearers can be confusing and has many meanings within the industry but is often used for all fish that give birth to live young.

Common livebearer such as Guppies, Endler’s guppies, Mollies, Swordtails and Platies, are touted as ideal beginner fish for hard water aquaria by many bloggers, aquatics shops and hobbyists – and there are some good reasons why.

Image above: Mollies can be extremely hardy.

Easily available, easily affordable, hardy (sometimes beyond belief) and colourful – all attributes that shine and make them suitable for the new aquarist, but there are also reasons why the beginner should avoid them.

Common livebearers have been farmed intensively for more than a century, and in many cases, it seems, with scant regard for genetic strength. Guppies seem to be the most universally abused in this regard.

Above image: Genetic weakness can lead to deformities, sometimes targeted deformities like in balloon Mollies.

Those pushing for more and more fancy and valuable features (like ‘elephant ear’ pectoral fins and ‘albino’ variants with bold body colours) generally put some effort into genetic strength, to produce a saleable fish. But, mass farmed guppies have gone from hardy beginner fish to risky purchase in only a few decades. It seems this has been fuelled by a race to the bottom as far as price is concerned, and most shops are still seeking the cheapest stock to undercut the competition instead of aiming for quality.

All of the fish mentioned above have a similarity to Gizmo the Mogwai – they multiply when they get wet. Yes, it is great to see the first few fry dotting around your tank only weeks after buying them. And yes, it brings a sense of achievement and of course, free fish!

Fast-forward two or three months - not only do you have to worry about trying to find homes for all these young fish, you also have to worry about the holding capacity of the aquarium and deteriorating water quality. This meaning intensive maintenance regimes – not something a beginner often signed up for. 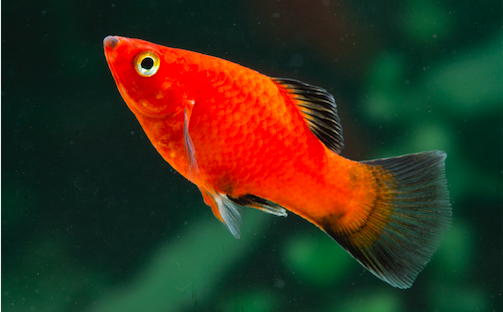 Above image: Platies are particularly quick to reproduce.

The sense of achievement also diminishes when you find out that bearing young can be a survival reaction. Females release young when they fear death or are stressed, as well as when everything is tick-a-dee-boo.

It’s not always a simple case of returning the young to the shop you bought them from either. They may take them in if they have the room to spare, if they look healthy and colourful and if they have been nurtured to a saleable size. Thanks to that race to the bottom, you will be extremely lucky to get even a breath if store credit or discount in return (unless you have been breeding a particularly desirable strain). 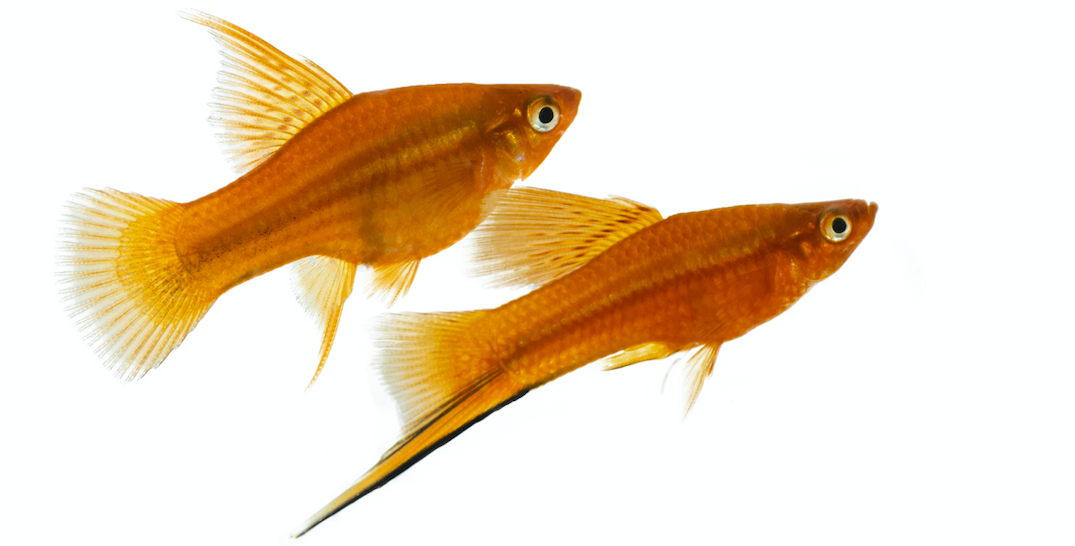 There are ways around the breeding, but they aren’t straight forward. You could keep only females, but you’re tying yourself to the less attractive sex as far as Guppies, Swordtails and Sailfin mollies are concerned. Also, female livebearers can hold on to sperm for up to six months to fertilise their eggs. They are sexually mature in very little time as well so; a stray male offspring can mate with your females before you realise. 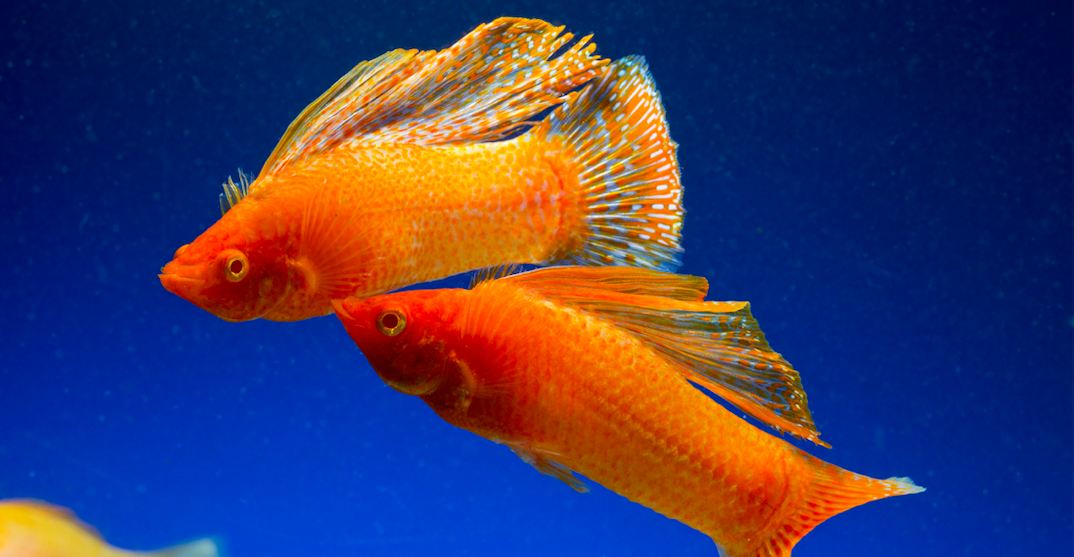 Above image: Male livebearers are competitive.

The relentless desire to breed can wear females out in mixed-sex tanks as well. Because of this, when mixing sexes, you should keep at least two females to every male – to divide attention. With female platies able to produce up to 80 fry every 30 days you can see what you might be in for in mixed tanks.

For advice on How to breed livebearing fish click on this article.

Here’s a thing you won’t read about very often – aggressive livebearers. It baffles me that this doesn’t get mentioned more. For a start, their desperation to breed can lead to males becoming aggressive to females, and to competing males. This breeding aggression crosses species as well. Platies will breed with Mollies and Swordtails and vice versa (another reason why home raised livebearers may be turned-down by shops).

Above image: Female livebearers may be rough around the edges due to breeding pressures.

Then there’s the all-male strategy to avoid breeding. Avoid breeding it does, avoid aggression it doesn’t. The competitiveness of males is heightened when denied their female counterparts. In small groups, males will single out the weakest individual and collectively suppress them. You may not notice the bullying as behaviour changes when you approach the tank (when the possibility of food is a distraction).

They aren’t down-right vicious, the domineering behaviour is subtle, like pushing the weakest fish away from food and the odd little peck at the fins from each stronger fish. It may take several weeks for the suppressed fish to show signs of weakness, but once it dies, the next weakest fish is the new target for the remaining group.

This male competition is more of a problem with Guppies, Endler’s guppies and Sailfin mollies but it can be the case with all the livebearers mentioned. The larger the group, the less chance of targeted aggression so keep at least eight males (of the same species) together to help avoid it.

Above image: Even very peaceful fish can be enticed to nip flamboyant fins.

Though small and commonly very peaceful, even fish like Neon tetras are known to nip at colourful, flamboyant finnage from time to time (you should see a magnified image of the teeth in their mouths). Partially nippy tetras such as red-eye tetras have been known to shred the fins of Guppies. So, fancy livebearers really do limit what else you can introduce to an aquarium.

Poor advice is rife when it comes to the size of the aquarium needed to house different livebearers. All too regularly, I see Endler’s guppies suggested for nano tanks (45ltrs or less). The males may be small, but they are highly active and competitive fish and, as above, male-only tanks need a good number of individuals to avoid targeted aggression. Mixing sexes? The females are roughly three times the size, and the resulting young will need much more space than a nano tank. I wouldn’t advise Endler’s guppies for any tank smaller than 70ltrs myself. 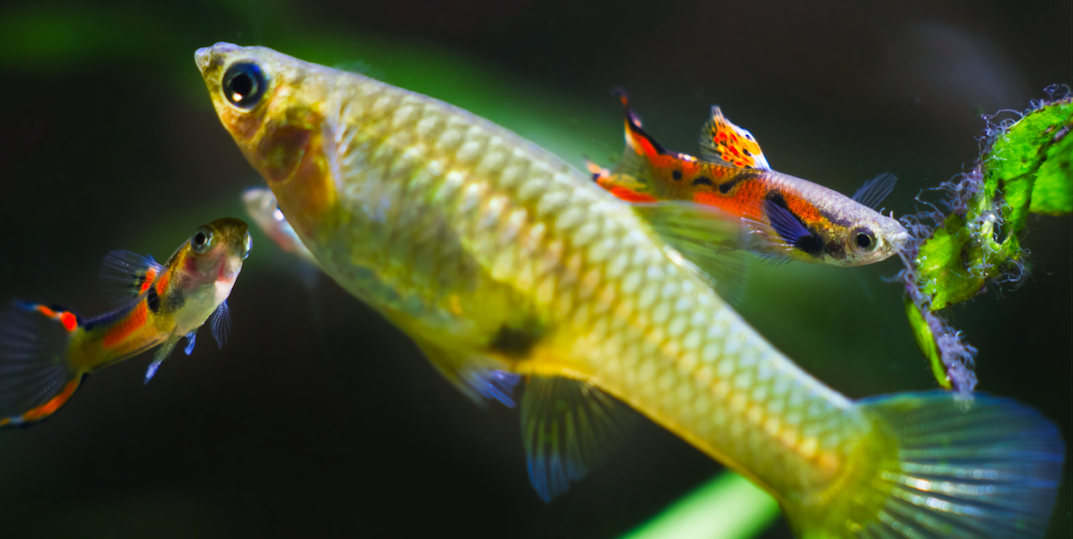 Swordtails have proved to be the least competitive of the livebearers in my 20-odd years of dealing with them, and the least productive as far as offspring are concerned. This makes them more manageable, but they are a good-sized fish – reaching well over 10cm (in body) when kept well. They are also strong swimmers and good jumpers, so more space is needed than the average 60cm aquarium they are often advised for. I think a tank of less than 90cm is cruel. Ideally, give them a tank of 100cm or more.

As a final thought, or request rather. Please don't fuel the market for balloon bodied fish. The idea of purposely producing deformed fish is rather barbaric and can easily lead to health issues and shortened life-spans.