When offered an assignment involving a first-time fishkeeper creating a reef in a BiUbe, I felt pretty shaky. I expected a tank with endless accessories, more equipment than water, struggling inverts and an apologetic owner.

Yet once I’d glanced over the tank, set up by web designer Tigga Reese of Slough in Berkshire, it was my turn to apologise.

This was a tank any reefer could be proud of. As I drooled over bulging Trachyphyllia, intensely coloured zoanthids and two of the healthiest clowns I’d seen, I couldn’t help coveting a BiUbe conversion of my own. 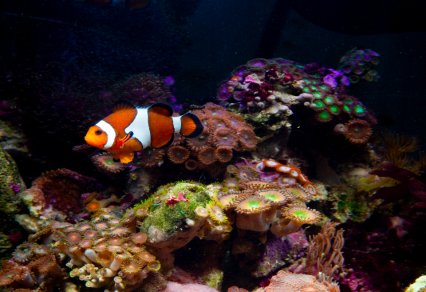 Tigga has only been in the fishkeeping game for ten months. This is his first attempt at keeping any aquatic life and the project stemmed from his children’s desire for clownfish in the home.

He duly bought a BiUbe marine package online and initially set it up as per instructions with central uplift and original media and lighting. Into this he placed some live rock, a long branching rock, and the clownfish — but he wasn’t happy with the end product.

Soon he found himself on thenanoreef.co.uk and daunted by the plethora of potential methods to upgrade his tank. He noted those owners who had drilled tanks and incorporated sumps, added weirs, forced in cumbersome skimmers and many more changes.

Then he learned of natural filtration methods and decided that was the route for him. After reading up on the subject Tigga was sold.

Since then, Tigga has employed a real back-to-basics approach to fishkeeping. The central uplift was removed, as was the original BiUbe LED lighting. The heater stayed in, but more live rock was added, building up a massive central pillar riddled with caves and hollows for livestock to hide among.

At this point Tigga also moved to premixed water. Originally he’d been using tapwater and making his own, performing a weekly 10% water change. Now, with premix to hand, made from RO water, he changes around one and a half litres daily.

The effects, combined with the sheer abundance of live rock, means that nitrates and phosphates are gloriously low and nuisance algae unseen. He’s had no need yet to get among the original BiUbe filter media to syphon waste from the base – and the media itself now looks like fragmented live rock, covered in encrusting purple and pink algaes.

To create flow he added a Koralia 900 nano pump that sits high in the tank on a constant flow. It used to turn off on a timer for brief periods, but now runs 24/7. 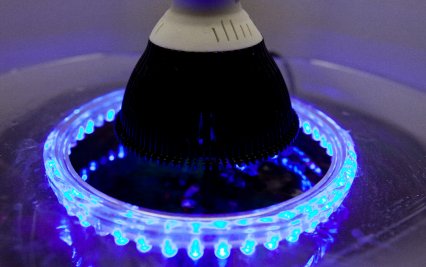 Lighting was replaced by a BoostLED 30 PAR lamp with attaching bracket and it curves elegantly over the tank, looking like a metallic giraffe. This was acquired online for around £120, including delivery.

The effect is of very cold light, a strong blue presence being obvious, creating long, mysterious shadows down the height of the tank.

It is supplemented by an LED light that Tigga bought from eBay, and converted. At a cost of a mere £14, the intense blue strip sits in a ring on the lid of the tank, around the entry point of the Boost. It’s timed to come one around 30 minutes before the main lights, and then the two have a staggered crossover period, with the strip going off another 30 minutes later.

Come evening, the same thing happens again — ensuring that the fish aren’t subjected to a light shock in either direction.

Aside the daily water changes, maintenance involves cleaning the acrylic when needed. Originally, Tigga used a magnetic algae scraper, but soon noticed scratching on the inside of the tank. Now, he uses a combination of an old AA membership card for stubborn algae and piece of foam attached to a chopstick to get to hard-to-reach areas.

Given the inaccessibility at the rear of the aquarium, a critic might spot some encrusting algae tucked away, but it doesn’t detract from a stunning set-up.

Livestock is a combination of attractive zoanthids, mushroom rocks and some encrusting briareum, with a Painted Trachyphyllia catching the eye at the front. Lighting is not an issue for any of these creatures and many polyps have increased in numbers since they were introduced. 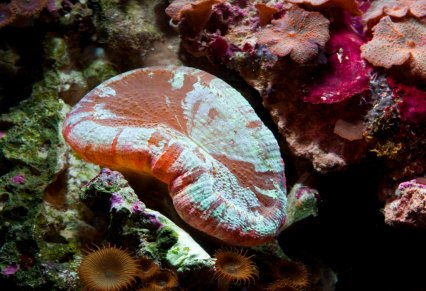 Tigga adds nothing for coral food. Neither does he add supplements to the water. No bottles of magnesium, calcium or other lotions sit anywhere in the house and the water changes keep everything in balance.

He frequently has water tested at his local Maidenhead Aquatics store and staff have yet to find a single fault.

He certainly seems to have the fishkeeping touch…

The fish consist of two clownfish who at the time of my visit were going through all the motions of getting ready to spawn. They dominate the highest level of the tank, investigating everything, and are some of the healthiest looking fish I’ve met.

Also in the tank, but more secretive, is a single Royal gramma which only dashes from rockwork crevices to take the daily feed of Gamma brineshrimp with omega 3 enrichment. No other foods are currently offered.

Hidden somewhere is a Turbo snail which occasionally rearranges something, shoving a loosely anchored polyp clump from its mooring. Equally scarce is a Peppermint shrimp which hides in the old filter compartment.

For a first tank project, I’m blown away by what has been achieved.

Tigga has actually taken filtration out of a tank and made it better. He’s left with a near effortless aquarium that even the most long-term of fishkeepers should be proud to show.

The only downside? He now has a stockpile of BiOrb filter media bought with the tank, hoping to save on long-term costs. 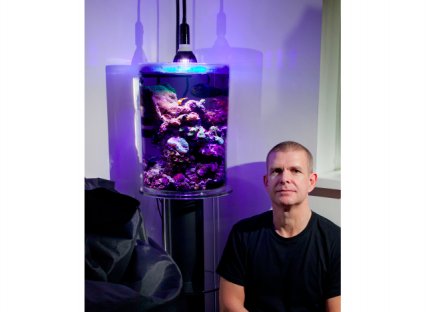 …and for his next project

Seeing this set-up makes me even more excited at the prospect of reporting on the 180 x 60 x 60cm/6’ x 2’ x 2’ marine tank Tigga is planning once he’s finished extending his house. I get the gut feeling it’s going to be something pretty special…