When I first saw Roy Deki’s aquarium on the Aquatic Plant Central forum website I knew it was a must feature for PFK. Then, only during this interview, did I realise he had been influenced by one of my own first aquascapes!

What was your main goal and inspiration behind this aquascape?
I did it after a long thought-out process. I wanted to create an aquascape that was relatively low maintenance. Having done 'high light, high tech' set-ups in the past and having multiple tanks in my house, I knew I had to do something less demanding.

This is my largest aquascape so far, even though some readers may think this is a medium-sized tank. I just didn’t want a tank filled with fast-growing stem plants: I wanted to enjoy viewing it more than working on it.

One of my main inspirations is George’s own aquascape called "80cm - Mother Microsorum". The first time I laid my eyes on it was on a forum-based website and I was intrigued by the way he used Java fern as a main focal point. I soon planned to use this concept in my 272 l/60 gal tank which I actually purchased intending to create a large panoramic Iwagumi layout.

Can you tell us about your maintenance regimes?
This tank has exceeded all my expectations. When it was new I was doing weekly water changes, but now that it has balanced, nutrient-wise, I have gone to one change per month and at that time I clean both canister filters. I always find about 20-30 baby Cherry shrimp in the process!

Did you see any algae issues?
This may be hard to believe, but this tank has not developed one single  problem. From day one, there’s only been some spot algae on the glass. 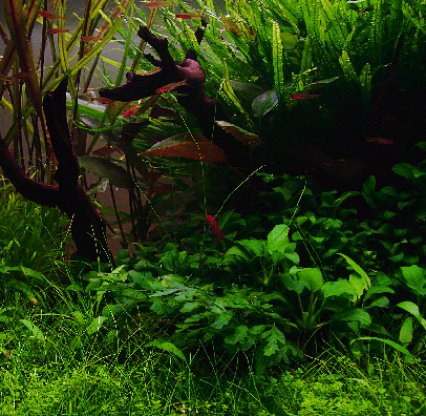 What were the biggest lessons learned from this aquascape?
I believe that sometimes we hobbyists make things very difficult for ourselves. This tank is a dream come true and I truly get to look at it more than work on it — key reasons being the combination of relatively low light, a shallow tank and a fair amount of CO2 injected.

I referred to these lights as 'relatively low light' because they are not overdriven or high output. Taking the same length bulb, these are a lower wattage than the same length high output bulbs. The reflectors are a great asset and help distribute the light more evenly.
The bulbs also tend to last longer because they are not over driven and do not get hot. I now use them on every tank in my house.

What about yourself and your hobby experiences?
In 2003 I bought a 209 l/46 gal bow front tank, 220 watts of compact fluorescent and a fully automated CO2 system. No turning back now, I was committed.

This was my first experience in the planted tank world and I had every form of algae known to man. It took me about eight months of battling algae and then, for some miraculous reason, it started to fade away and, within one week, it was totally gone.

At that point in my hobby experience I had no idea why. Now I know the tank had finally balanced with enough bacteria and nutrients in relation to the amount of light provided.

I have since learned that you can have very healthy plants with lower light levels and less fertiliser.  The only result is slower growth rate — which I prefer. This tank has less than three watts per gallon, yet the Ludwigia arcuata is a vibrant red, and only needs to be trimmed once a month. This has provided me with more optimum viewing time.

The Hemianthus callitrichoides has also thrived under these conditions and is growing at a slower rate.

Many people have great success with the 'high light, high tech' set-ups and I congratulate them, but I have discovered a formula that seems to work for me.

Fishkeeping cv
Name: Roy Dekiâ€¯
Age: 47
Status: I live in a suburb of Phoenix, Arizona, called Chandler. I have been married for 15 years to Beth and we have a very active eight-year-old named Emma Rose.
Time in hobby: I started in 2003 when I bought my first aquarium. It was an Eclipse 6 and, of course, I had all the usual suspects as fish: for example, Tiger barbs, Chinese algae eaters and Rainbow shark.
Inspiration: The first time I saw a planted tank was on the Internet and it was one created by Takashi Amano himself. From that point on I was hooked. I had to create something of my own.

This item first appeared in the June 2008 issue of Practical Fishkeeping magazine. It may not be reproduced without written permission.