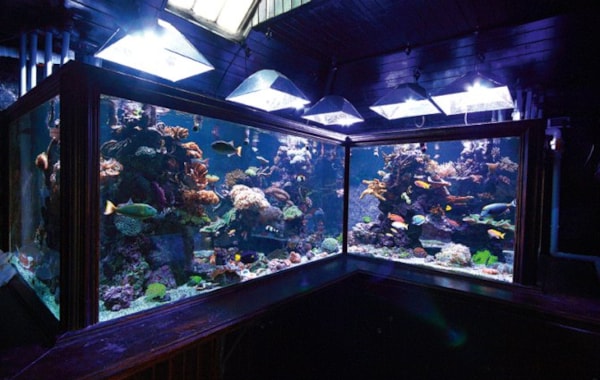 As private collections go, Mark Howarth thinks big. John Clipperton goes back to a house that's streets ahead when it comes to displaying corals.

Being confronted by the display tank at Acropora House in 2004 was a key moment in the early stages of my involvement in reefkeeping. Just starting out as a keen aquatic photographer, I was like that kid in the sweet shop!

I hardly knew what to shoot first, such was the outrageous scale and mesmerising diversity of the display before me. Struggling to afford even a small system, I suppose I could have been disheartened by what I saw. Yet I left feeling inspired — and I still feel this emotion whenever I see the tank.

I had never witnessed anything even remotely in this league before, not even at a public aquarium.

For a start, located in its own out-building, even the shape of the tank is something out of the ordinary. In an L-shaped format, the two back panels measure an impressive 3m/10’ and 2.5m/8’ respectively. Combine this with 1.2m/4’ of height and 1.2m/4’ of width and you begin to appreciate the massive volume involved. 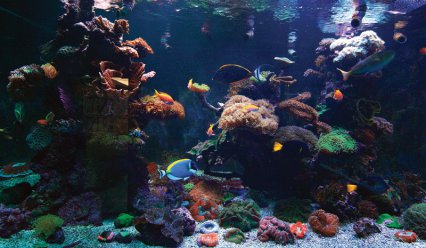 Swimming pool!
It would be possible to go for a swim in this tank — but the details don’t end there. Add several additional tanks to that volume, including a huge 4m/13’ long, 1m/3’ wide and 1m/3’ deep sump and you will arrive at the total volume of around 15,000 l/3,300 gal! Not surprisingly, this makes it easily one of the largest privately owned reef tanks in the UK…

So what drives someone to set up such a massive system and take on the considerable commitment and cost of running it?

Today, nearly 20 years on and one seriously thorough upgrade later, Mark’s enthusiasm remains infectious. He explains: "The first attraction was simply the colours of the animals and the fact that everything you put into a reef tank is alive — even down to the rock! The second attraction was simply the challenge. It’s just another world out there in the sea, with everything trying to out-compete or eat everything else!"

Although Mark has experienced his fair share of problems with this tank, he clearly loves his livestock and relishes the challenges of maintaining such a large system.

He adds: "The current tank used to be 99% SPS corals, but I had a problem with the water level and I lost some of my stock.

"However, this has given me the chance to go for a more accurate representation of a reef, this time by rebuilding with the aim of having specific 'zones' for my corals. For this new system, I specifically wanted a Goniopora area, a Catallaphyllia area, a Trachyphyllia area, plus of course areas for additional mixed SPS, LPS and soft coral growths."

With this in mind it was essential not to put any non reef safe fish into the tank, so Mark decided to wait for certain species to become available. Fish, particularly anthias, tangs, clownfish, gobies and wrasse were researched. 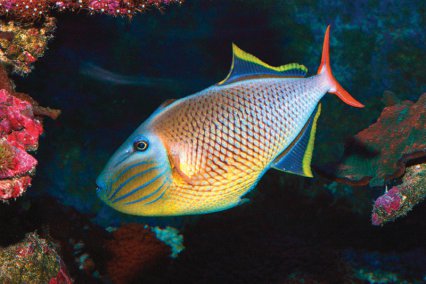 Centrepiece fish
It was also planned to have a magnificent pair of Crosshatch triggers as centrepiece fish. To provide swimming space for such large species, Mark also considered a much more open aquascape than his previous creation. Yet how on earth would you go about aquascaping such a vast space?

Mark decided to bring the existing overflows from the rear of the tank to the middle, in effect creating five pillars in the centre of the tank.

He then managed somehow to buy some 650 kg of dried, previously live, rock from an Internet forum and, using cement to combine the ‘dead’ live rock with some reefbone plate, he and a friend created some fantastic rock pillars that could be moved as if each was just one structure.

These were then used to ‘clad’ each overflow pipe, so providing lots of sites for corals, while retaining excellent swimming space and room on the sand for substrate-dwelling corals.

With flow another factor, an additional requirement was to avoid any powerheads in the tank. As such, Mark opted for two eight-way ‘ocean motion’ valves fed by an Argonaut AV250 pump, supplying 25,000 l/5,500 gal per hour, which was split into two outputs — one for each ocean motion.

In terms of the other life support systems, things stayed largely the same as on the previous version of the tank. "Because the systems are all connected to the same central sump, and the advantage of having some 17,000 litres of water, the tank parameters stay very stable," explains Mark.

"Water changing is continuous and I swap approximately 600 l/132 gal a week using peristaltic pumps. I also lose 60 gallons a day though evaporation and this is replaced with an auto top-up. 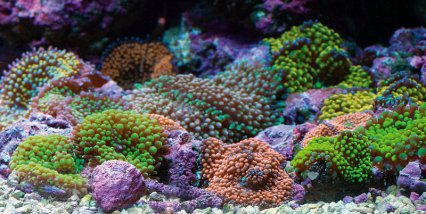 "Water testing is weekly unless I have any obvious coral or fish problems, and then it is sometimes tested daily. I test for everything, every Saturday morning: salinity, ammonia (never had a reading, but still do it!), nitrite, nitrate, alkalinity, calcium, magnesium, phosphate…. pH and redox are measured via IKS with the probes calibrated every Saturday as well."

Now the tank is set up and well established, Mark feeds the growing collection of fish and corals once a day using whole mussel, Mysis, brine shrimp, spirulina and coral frenzy.

Although it is now a picture of health, Mark is the first to admit the tank initially experienced problems — chiefly the growth of cyanobacteria on the substrate. To combat this, he added a second AV250 pump, meaning that each ocean motion now outputs 25,000 l/5,500 gal an hour.

This gives a strong and chaotic flow throughout the tank and was instrumental in clearing the cyano outbreak.

Rare big corals
I saw the tank in fabulous condition. Some corals are absolutely huge and I doubt some single pieces would fit in my own 1.2m/4’ tank. Some are extremely rare too…

Indeed, Mark had recently added a fantastic collection of rare LPS from a tank break-down. In terms of fish stock, inquisitive anthias and tangs, including a huge Lipstick, inspect me at the glass, while the male Crosshatch trigger is clearly in top condition — displaying breeding coloration as it flirts outrageously with an equally glowing female.

As the halides go out sequentially, and the room becomes dark, I get out my pure fluorescence viewing kit. It’s the first time Mark has used such equipment and I am pleased at his string of amazed expletives when using my torch and goggles! 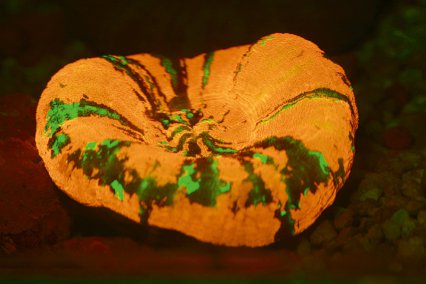 Under pure fluorescence viewing some of the new LPS are particularly amazing. One red Scolymia even glows like a hot lump of magma. In the dark the anthias seem particularly active and it is apparent that they are feeding on some kind of larvae that have been released, probably by one of the Cleaner shrimp in the tank. Half an hour passes in what seems like minutes…

Of the system’s development, Mark is typically down to earth. "Basically, I just want to develop what I already have and give as many people as possible the opportunity to come along and see the tank," he says.

In terms of guidance he offers: "My advice has really not changed in the last five years. The first thing is to keep it as simple as possible. There’s usually no need for huge amounts of equipment or additives. Most importantly, always stick to a weekly water change and, most of all, enjoy it!"

Many thanks to Mark, and wife Julie for allowing me to review this tank and taking the time to explain it in detail. I I am sure that this amazing system will continue to inspire those lucky enough to see it. 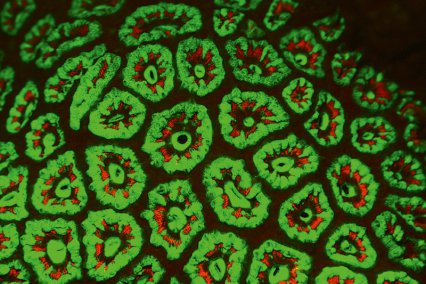 This item was first published in the January 2009 issue of Practical Fishkeeping magazine. It may not be reproduced without written permission.