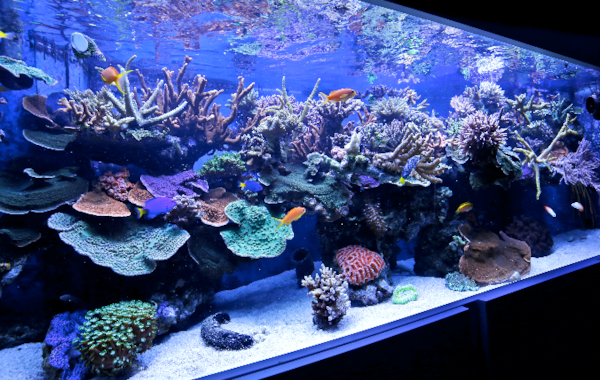 Aaron’s set-up is just dazzling — and it’s only 18 months old.

Aaron’s set-up is just dazzling — and it’s only 18 months old.

Meet Aaron Bowyer, a 6ft 6in tall reader with a beautiful reef tank that’s nearly as long as he is tall...

Aaron Bowyer is clearly a talented fishkeeper who thrives on a challenge. He started the hobby as an eight-year-old, encouraged by his mum who kept tropical fish. He kept bread and butter community fish, successfully bred many and by the time he was 14, he’d moved onto planted tanks and discus. He could grow plants, aquascape with natural flair and was breeding his discus at the age of 15. I know this because he showed me some very impressive photos taken with a 35mm film camera.

Soon he moved into marines at a time when undergravel filtration was the norm and SPS corals were virtually impossible to keep alive. With a natural gift for all things aquatic, Aaron took the logical step and after A-Levels studied for a BSc degree in Aquaculture and Fisheries Management at Sparsholt College.

After an admittedly unrewarding career managing a well-known arts and crafts outlet, he maintained his hobby and got chatting with the owner of the Reef Dreams shop in Winchester. It wasn’t long before Aaron was offered the job of full-time manager. No surprises that
he made the move and hasn’t looked back since.

Being the manager of a reef retailer had its benefits. Aaron was offered his current six-foot tank and cabinet by the shop’s owner for the princely sum of £100 — if he could take it away himself. That was around 18 months ago and the result now is nothing short of stunning (scroll down to the bottom of the page for video). 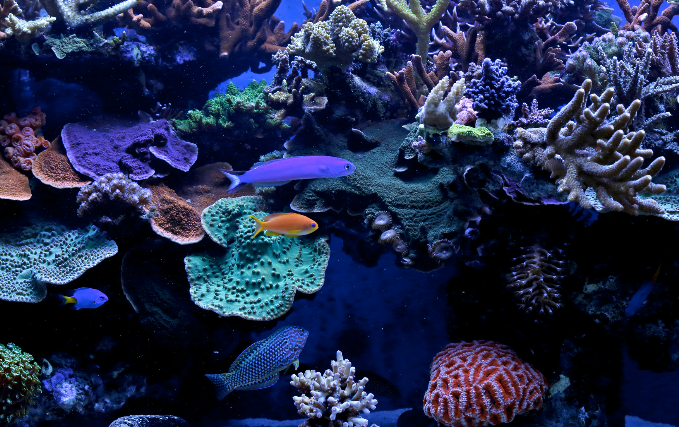 The tank is turned over 90 times an hour!

I arrived at Aaron’s home in the evening to find him away, still at work in his shop. His girlfriend, Anneke, kindly let me in and the brightly lit tank instantly caught my eye with the familiar bluish ambient glow that’s associated with most reef aquaria. I think my jaw actually fell open involuntarily to allow my brain to compute the heady high-impact mix of bright colours and movement. 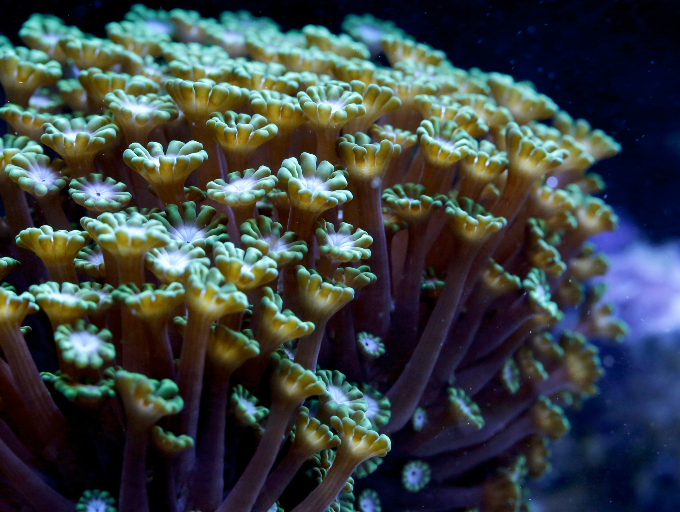 With 90–95% of the corals being brightly-coloured SPS I knew I was witnessing something pretty special, even as someone who’s more akin to planted aquascapes. The colours were so vivid and bright that any non-fishkeeper could be left wondering if indeed the corals
were real!

Aaron returned home soon after and we quickly entered into a dialogue about his hobbyist roots. When I asked, “why reef?” his answer was remarkably straightforward. “I need to challenge myself”, Aaron replied. To grow relatively demanding corals to such a high standard is indeed a challenge, and one that Aaron has clearly relished. 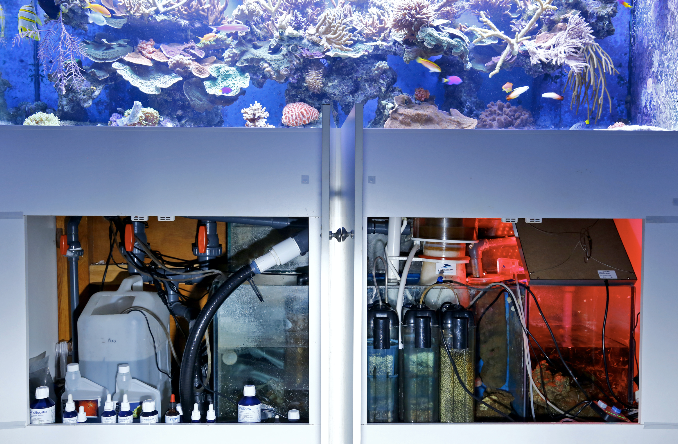 Skimmer, nitrite removers and other equipment is hidden away in the sump.

He puts much of the success down to consistency in product usage using the balling method — the technique of dosing different solutions to give the corals the minerals they need. Aaron uses the Tropic Marin Pro-Reef range of salt and balling products. The three balling solutions are all dosed automatically using a GHL auto doser and Aaron goes through a total of 1100ml every day. He has calculated that this equates to a mighty total of 74Kg of balling salts every year! In theory this should mean that there’s around 74Kg of added mass to the corals, which is incredibly impressive and leaves me wondering how sustainable such heavy growth can be. Aaron tests the water regularly to ensure the parameters with a variety of high-end test kits to spot any trends in water chemistry fluctuations.

There’s almost 600W of high-output T5 lighting with reflectors, so Aaron runs a cooling fan constantly over the surface of the water. The PAR reaches around 400–600ųmol at the surface and 150ųmol at the substrate. No chiller is employed. Aaron plans on putting even more light over the tank in the form of an eight–T5 ATI unit. I asked if he had considered LEDs but he explained that to get a similar quantity of light would cost over £3,000, using several Radions or Hydra 52 units. Arguably the effect of T5 can be more impressive than LED with its consistency in light spread and lack of glitter lines. It’s largely down to personal taste and budget, as with all aspects of fishkeeping. 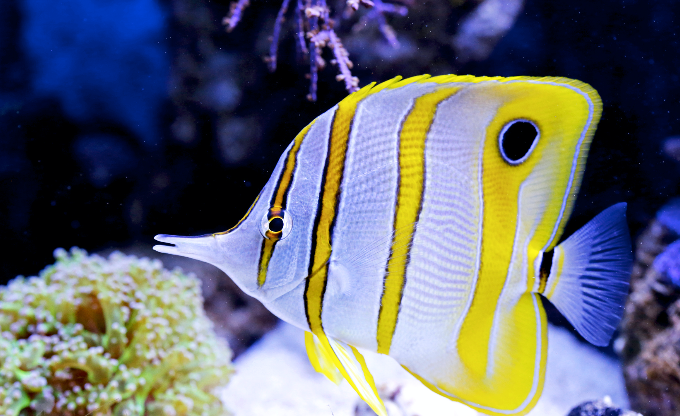 The Copperband butterflyfish is a firm favourite.

Aaron’s fish selection is equally impressive. I’m a fan of seeing more smaller fish versus fewer larger fish, as it gives an improved sense of scale; a principle that he agrees with too. 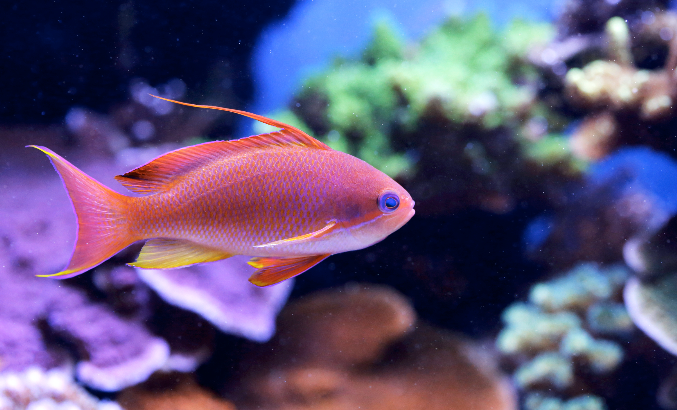 Dominated by a wonderful collection of wrasses, blennies, damsels and anthias, the mix of colour and movement in the tank, especially after feeding was a sight to behold.

A large Copperband butterfly and Purple tang stood out as feature fish, with the former being Aaron and Anneke’s favourite specimen.

I asked if he had encountered any major issues with his set-up over the 18 months it had been running and was pleased to hear of nothing, except a jumper that triggered the installation of the mesh cover. 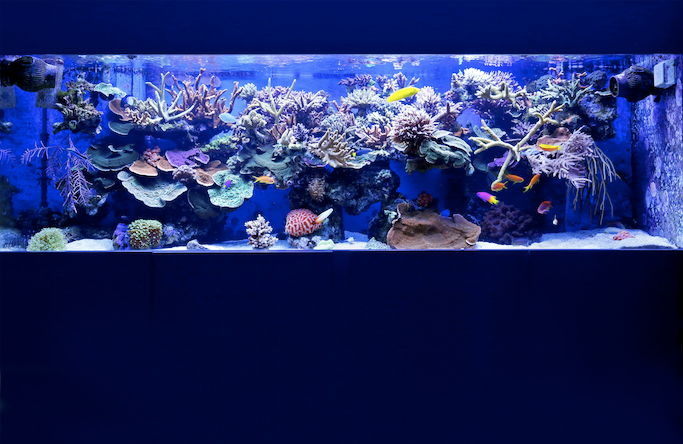 Aaron’s tank is filled with colourful SPS corals, all glowing with health.

Better than the telly!

The tank sits pride of place in the couple’s living room and I can’t see them watching much TV when there’s such a spectacle as this to appreciate. But Aaron suffers a similar problem to many other experienced fishkeepers and aquascapers  — he’s never satisfied and is always looking at ways to improve his set-up.

He explained that one of the pink Bird’s nest corals in his system had lost its intensity and he was determined to rectify the problem. He told me that you can lose colour in a coral in a matter of days, but it can take months to get it back again.

It’s this determination to reach the highest of standards that I believe has been the key to Aaron’s success, and I left his home feeling very inspired and motivated. Maybe it’s about time I set up a proper reef tank myself… 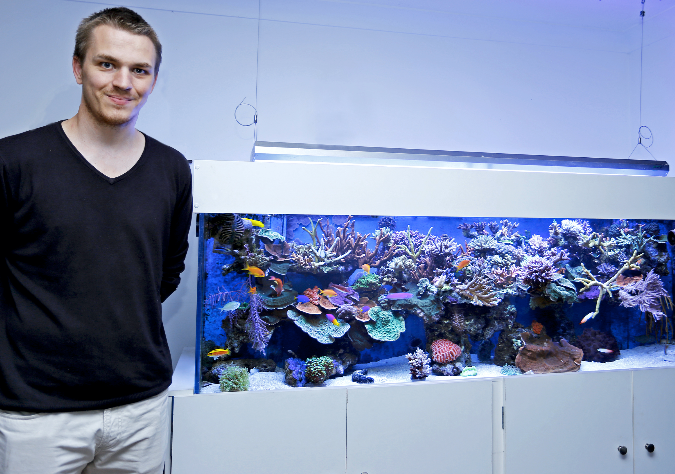 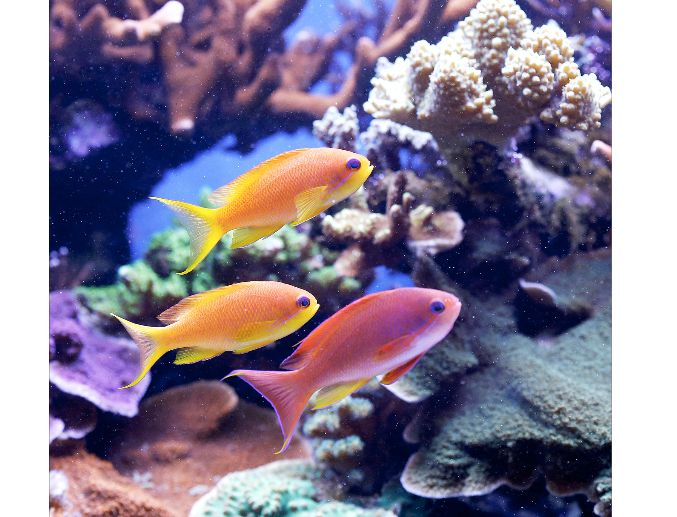 Exquisite anthias swim between the corals.