Three species of shrimp get to try out 28 different foods, supplements and snacks in this special buyer’s guide. 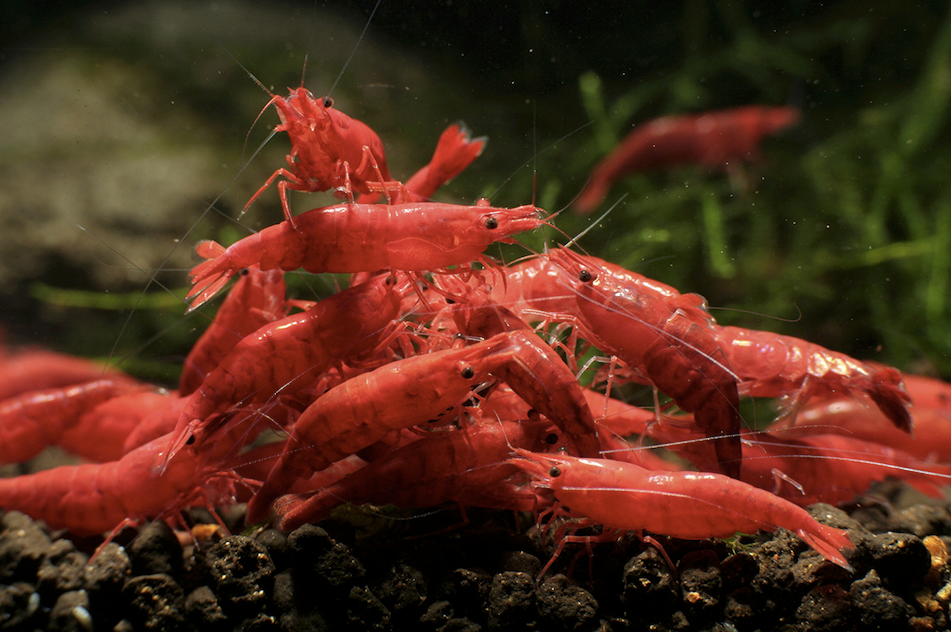 Adding new inhabitants to your aquarium is always a bit of a challenge — you have to find out what water parameters they prefer and what diet they like. If you are an aquarist with at least some experience, sorting out the food for a new fish shouldn’t be a problem (with a few exceptions). But if your new arrivals happen to be shrimp, which you have never kept before, then you might be in trouble.

You can check the Internet and join shrimp-related discussions online for some help, but the responses can be confusing and sometimes contradictory. They will all agree that the biofilm growing on the soil and decorations is a must, but when it comes to commercial foods there is always a difference of opinion. Almost every shrimpkeeper has their favourite brand and will swear that it is the best possible choice for your shrimp.

There are several brands to choose from — and the number is constantly increasing with more and more companies realising the market potential of this expanding branch of the aquarium hobby. Furthermore, these foods come in many forms and shapes: you can buy granules, pellets, sticks and pads, making it very difficult for a rookie shrimpkeeper to make a decision. This article gives some guidance for choosing the best shrimp foods to suit their needs.

The most common types of shrimp food 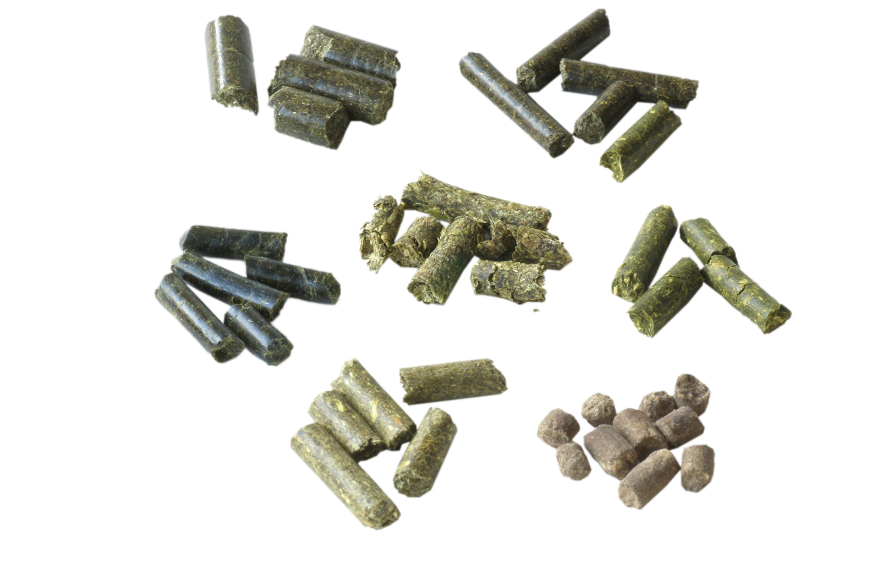 Pellet foods
These can come in varied length and thickness. After dropping them into the water most pellet type foods will swell up very fast and fall apart into smaller or larger pieces, forming a carpet on the aquarium floor. During this process they release a significant amount of scent, so the shrimp usually get very excited pretty quickly. After finding the softened pellets they start to dig in and will be quickly surrounded by a cloud of food particles, so even the tiniest shrimplets get a meal, but it can lead to increased water pollution, clogged soil and a boom in the snail population. To avoid this, use a feeding dish or a Catappa leaf as a dinner plate. Pellets are usually easy to dose — just break off the required amount.

Feeding pads
These dissolve very slowly, so the shrimp can nibble them for hours — unless the snails overtake them, which can happen even with a moderate- sized snail population. If you have no snails and want to keep your aquarium mess free, then pads are for you. As they don’t fall apart it is very easy to remove the leftovers even after 24 hours. On the down side, young shrimplets may have difficulties getting their share, especially when the adults form a tight “shrimpball” around the food. Breaking up some of the thicker pads to the required size can also be problematic. 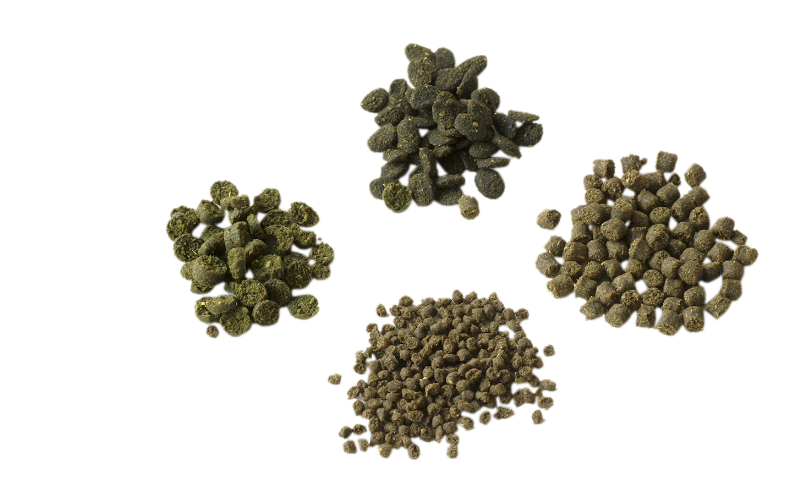 Granules
These seem to have the advantages of both of the previous foods. They are small enough to feed individual adult shrimp or a small group of youngsters, yet remain solid for a relatively long period.

Granules are very easy to dose, making them a perfect holiday food. Just ask your shrimp-sitter to place a certain number of granules in your tank.

Feeding granules has an added benefit in that it also offers a good opportunity to take pictures of your shrimp, as after grabbing a grain they usually climb up to the vegetation or decor and stay there for a long time, nibbling on their treasure.

How the foods were tested

Having kept shrimp for nearly ten years, I have tried several foods from different brands, some more readily accepted by my shrimp than others. I’ve always wanted to see how the different products can perform in a face to face comparison, so I asked the most frequently mentioned and used brands to provide samples for my test.

I received 28 foods from UK and overseas suppliers. The samples were put through a very rigorous test: they were fed in a random order, which was unique for every single tank. With this the interferences of external environmental effects — like water or temperature changes — could be minimised. I fed the shrimp only every other day (as many shrimp breeders do), dosing only bacteria (GG BacterAE), mineral powder or immune boosters (Boss Booster and GG Betaglucan) on the “fasting” days. Please note that my shrimp tanks are only lightly to moderately stocked, therefore they could find sufficient biofilm even between feedings to keep them full. In a highly stocked or freshly started tank they need to be fed every day.

Altogether, 27 shrimp tanks were used for testing, out of which 16 contained Cherry shrimp, Neocaridina davidi, colour forms. In ten of the tanks I had Caridina logemanni shrimp, including Crystal red and Crystal black shrimp, as well as Taiwan bee varieties. The last tank was home to Super princess bee shrimp, Paracaridina sp.

As my resources didn’t allow me to compare the long term dietary and health impacts of the foods, I concentrated on the shrimp’s reactions to the different products. What I experienced while carrying out these tests, however, was the positive effect of the varied diet: my shrimp looked happier, many females became berried and the survival rate of newborn shrimplets improved significantly.

Staple foods
JBL NovoPrawn: Medium sized granules in easy-dose packaging. It is relatively hard and slow to dissolve, so it’s easy to remove leftovers (you won’t get many). All the shrimp quite liked it and the snails were not attracted to it.

JBL NanoPrawn: A smaller tube size of NovoPrawn for those with only a few tanks. The results are almost identical, which is not a surprise, as the ingredients are exactly the same. The only difference is the higher Vitamin C content of the NanoPrawn.

Hikari Shrimp Couisine: Very small but hard granules that don’t colour the water. Slow to dissolve, they had a long lasting attraction, especially for the Neocaridina. For some reason the Taiwan and Princess bees didn’t like it too much.

Dennerle Crustagran: Relatively large and medium soft grains, which soften up quite quickly (around three hours), releasing some pinkish-orange colour and probably lots of scent, as the shrimp got very excited. The young shrimp loved it.

Dennerle Complete: I’ve never seen snails moving at such a high speed as they did when they raced towards these pads. Unfortunately the shrimp only started to look 20–25 minutes later, by which time the food was covered by snails. In tanks without snails this very slow dissolving food is a good choice, as it doesn’t make a mess.

GlasGarten Shrimp Dinner granules: Large and very soft granules, disintegrating within 30 minutes. It is quite a messy food, but created lots of excitement among the shrimp, adults and young likewise.

GlasGarten Shrimp Dinner pads: This almost black food started to colour the water almost immediately. There are probably also other substances released, as all the shrimp, including the newborn ones, got very excited. They stayed on the food nibbling it for a long time, not being disturbed by snails, which for some reason didn’t find these pads attractive.

Lowkeys Hiden No Esa: This food feels very hard, but softens up slightly after three hours. It has a very strong smell and had a bit of a ‘Marmite effect’: some of my shrimp loved it; others hated it. This phenomena didn’t depend on species — I experienced it across the board.

Lowkeys Ultra Supple: A hard but easy to portion pellet-type food, which falls apart almost immediately in water, releasing a brownish colour and forming a cloud of particles. Fairly messy, but loved by all the shrimp — and the only one my hard-to-please Princess bees found irresistible.

Lowkeys Ebi Supple: This is a very thick and hard pellet, so quite difficult to break off the right sized portion. After dropping it into water it softens up and disintegrates pretty quickly.

Benibachi Big and Small Mix: This is a mixture of granules and large food pads, the idea being to provide food for both large and small shrimp at the same time. I only have two problems with it: the small granules are at the bottom of the pack, so you have to dig deep if you want a mixture. Secondly, it’s usually the bigger shrimp that grab the granules, leaving the pad for the shrimplets — and these slow to dissolve pads attract snails like magnets, so the youngsters need to wrestle with the gastropods for their fare.

Boss Aquaria Shrimp Crack: A green coloured vegetable-based product from Australia. Quite hard and slow to soften up, it drove the shrimp absolutely mad. After the initial craze the Neocaridina stayed, the others left.

Aqua Eden Essential: Another quite hard pad, which is very slow to dissolve. It had a positive effect on the Caridina. The leftover food was still in one piece next morning — surrounded by snails.

Enhancers, additional foods and shrimp snacks
Dennerle Color: This colour-enhancing food is red in colour itself, but this doesn’t wash out in water. It was slow to attract the Neocaridina, but the Crystal reds loved it. Stays hard for a long time.

Dennerle Protein: A brown, relatively quickly dissolving pad providing protein rich meal for extra growth. It was quite readily taken by all of the shrimp.

Dennerle Mineral: A special food for those who prefer to provide the necessary minerals for shrimp in oral form and not as dissolved compounds. The shrimp didn’t go crazy for it, but ate the necessary amount.

Dennerle Pea and Leaf hoops: A ‘Hula Hoops’ kind of snack for shrimp! Give it to them if they have behaved well — they will be grateful!

Lowkeys Vitamin Kale: Exactly the opposite of the previous food: if that was the snack then this is a “must eat” dish. It smells of cabbage, and the shrimp will munch on the slowly disintegrating pellets

BorneoWild Color: A colour enhancing food, which gave a blue tint to the water. Its thin ribbon shape makes it easy to dose.

GlasGarten Artemia: A tablet shaped food, which is hard to break up but starts to disintegrate pretty soon. It releases some green colour and attracts mainly Caridina.

GlasGarten Löwenzahn: Dandelion has been a favourite of shrimpkeepers for a long time. If you can’t collect some, use this.

GlasGarten Mäulbeer: A snack for the shrimp of a town-dwelling hobbyist. This quickly dissolving pellet gives your shrimp a chance to taste the famous Mulberry. They will not refuse it!

GlasGarten Kräutermix 1: Herbs for shrimp? This soft pellet disintegrates and expands almost immediately, leaving a carpet of herb pieces that attracts shrimp like moths to a flame. It had an effect on my Neocaridina I’d never seen before.

GlasGarten Kräutermix 2: Another herb product, but not as good as the previous one.

Hikari Mini Algae Wafers: Not a shrimp specific product, but a good source of algae, so a wise choice — especially if you are also keeping algae-eating fish.

Benibachi Spinach Cubes: Aimed as a substitute for fresh spinach. You need to soak the cubes first, or they float.

How the foods compared

The order in which we’ve listed the foods in the table (right) does not represent value or quality. The highest score in each category is highlighted. Based on the comments above and the table, you can hopefully decide which foods best suit you and your shrimp. But don’t just stick to one — a varied, balanced diet is the key to success. 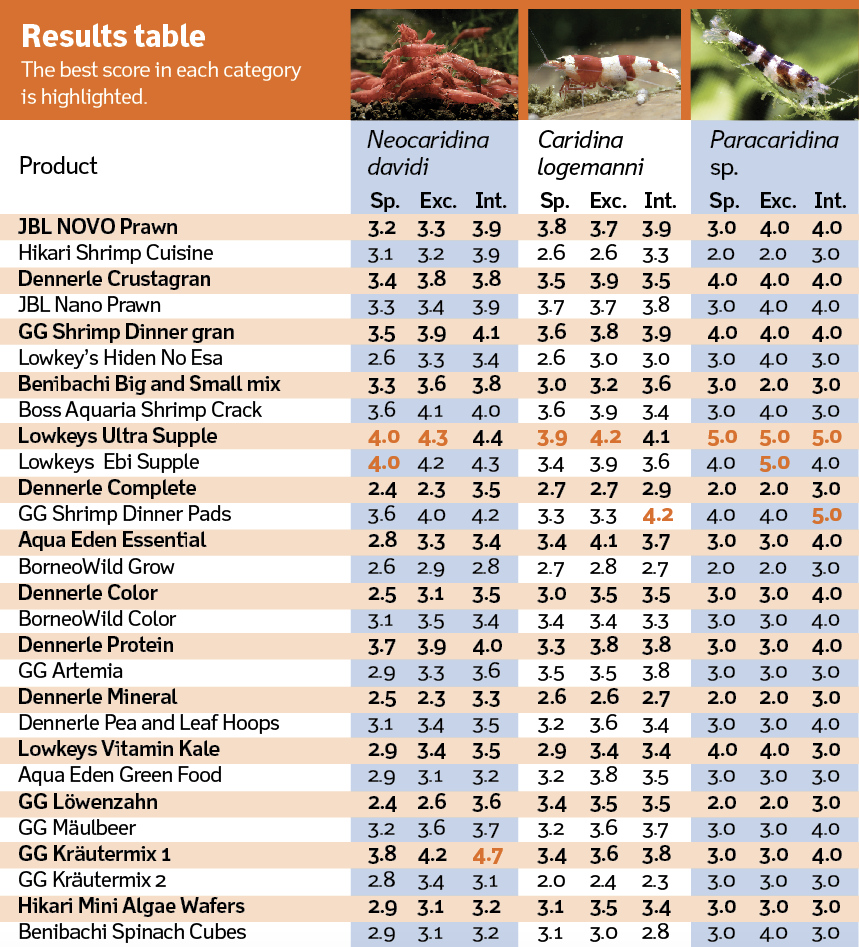